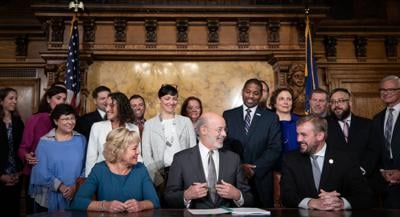 They were for it before they were against it.

“What’s unfolded is bizarre,” said Shirley Anne Warshaw, a political scientist and presidential scholar at Gettysburg College and author of 10 books on the presidency. “Some people are leery that votes in all of our elections can be tampered with. It’s just not true.”

In the months since, many of those same Republicans joined a series of unprecedented attacks on the validity of the electoral system they helped create. GOP lawmakers have, since Nov. 3, amplified baseless conspiracy theories, asked the U.S. Congress to overrule voters, and petitioned state and federal judges to undo their own legislation.

Elected Republicans who acknowledge President-elect Joe Biden’s victory or constitutional prohibitions against overturning it face the wrath of a bloc of GOP voters who appear to be convinced by Trump’s daily barrage of false claims about a stolen election.

“What’s unfolded is bizarre,” said Shirley Anne Warshaw, a political scientist and presidential scholar at Gettysburg College and author of 10 books on the presidency. “Some people are leery that votes in all of our elections can be tampered with. It’s just not true.”

Republicans legislators contend the problem isn’t with the election law they passed, but in how it was administered. They accuse Secretary of State Kathryn Boockvar of creating an uneven playing field by allowing counties and voters to fix technical problems on their mail-in ballots, and say the state Supreme Court illegally extended the deadline by which mail ballots must be received.

LNP | LancasterOnline asked several GOP legislators whether they would accept their $90,000 annual salaries next session if they believe they obtained the money through an unlawful process. None responded.

Though Republican lawmakers have signed onto resolutions calling the election “unlawful” and used press conferences and committee hearings to cast doubt on the results, none has suggested their own victories are in question. LNP | LancasterOnline asked several GOP legislators whether they would accept their $90,000 annual salaries next session if they believe they obtained the money through an unlawful process. None responded.

“Biden’s victory was supposedly invalid because of corruption, but in other races on the same ticket winners contend, ‘My election was not corrupt,’” said Warshaw.

The few Republicans who acknowledged Biden’s victory and didn’t join efforts to overturn it have been deluged with vitriolic criticism by Trump supporters. Trump is unlikely to loosen his grip on those voters after Biden is sworn in on Jan. 20.

Trump has hinted he may announce his 2024 candidacy for president on Jan. 20, the day Biden is sworn in. This would allow him to continue to raise money from his followers, and play kingmaker by endorsing and funding Trump-friendly politicians, analysts said.

Warshaw believes Trump will return to business to attempt to capitalize on his presidency with real estate deals in countries that benefited from his administration’s policies such as Saudi Arabia, Russia, Turkey and the Philippines.

Which Pa. lawmakers have been most loyal to Trump in resolutions, lawsuits on voter fraud? [timeline]

That continued influence could guide state Republicans’ legislative agenda after Trump leaves the White House, including attempts to undo their own expansion of mail-in voting.

“The problem is they (Republicans) have to pass it by a veto-proof margin,” as long as a Democrat occupies the Governor’s Office, Madonna said.

“The governor would veto an attempt like this to reduce citizens’ access to the kinds of voting options that were widely embraced in this election, and which many other states have enjoyed for years,” said Lyndsay Kensinger, Wolf’s press secretary.

Incoming House State Government Committee chairman Seth Grove, R-York, has said he plans a deep dive into how election law might be modified so that, among other things, the public knows the result of their elections more quickly.

“At this point,” Gottesman said, “nothing has been taken of the table.”

The false belief that the election was stolen will continue to motivate a segment of the GOP, said Alison Dagnes, political science professor at Shippensburg University.

Reinforced by a layer cake of Trump tweets, conservative TV and radio shows, like-minded relatives and friends, social media algorithms feeding readers what they want to see, and politicians willing to fuel their anger, a sizeable portion of the electorate will continue to reject the election — sometimes in person and en masse.

“There’s no convincing people who watch Fox News and Newsmax that the election was not stolen,” Dagnes said. “It’s a reinforcing circle.”

For candidates looking to build a base of support for a future run for higher office, those voters present a political opportunity, though not a risk-free one.

The outgoing president faces potential legal jeopardy from both state and federal prosecutors investigating his business dealings and campaign finances. He was reportedly an unindicted co-conspirator in the felony campaign finance fraud case that sent his former lawyer Michael Cohen to prison.

Democratic Attorney General Josh Shapiro, widely expected to be a gubernatorial candidate in 2022, has sued to block Trump administration policies on immigration, health care and the environment. Democratic Lt. Gov. John Fetterman, who said he’s considering whether to run for governor or U.S. Senate, tweeted criticism of the “snake handlers/lunatic fringe” trying to undo the election.

Both Fetterman and Shapiro have received national attention for their criticism of Trump. If the president’s standing falls — whether because of criminal wrongdoing or simply fatigue — he could take the political fortunes of his loyalists with him to the benefit of Democrats up and down the ballot.

But at the moment, Trump’s base remains the most enthusiastic bloc of voters in the GOP. Both Mastriano and Sen. Mike Regan, R-York, potential gubernatorial contender, have taken part in more attacks on Biden’s victory than almost anyone else in the General Assembly.

Trump supporters protest at the office and home of Bryan Cutler

Too busy celebrating the new year to login and get your dose of LNP | LancasterOnline?

Pennsylvania lawmakers are returning to the Capitol today to be sworn in for the two-year legislative term.

'It didn't materialize out of nowhere': Some say Pa. GOP helped sow seeds of violence

Donald Trump did not act alone.