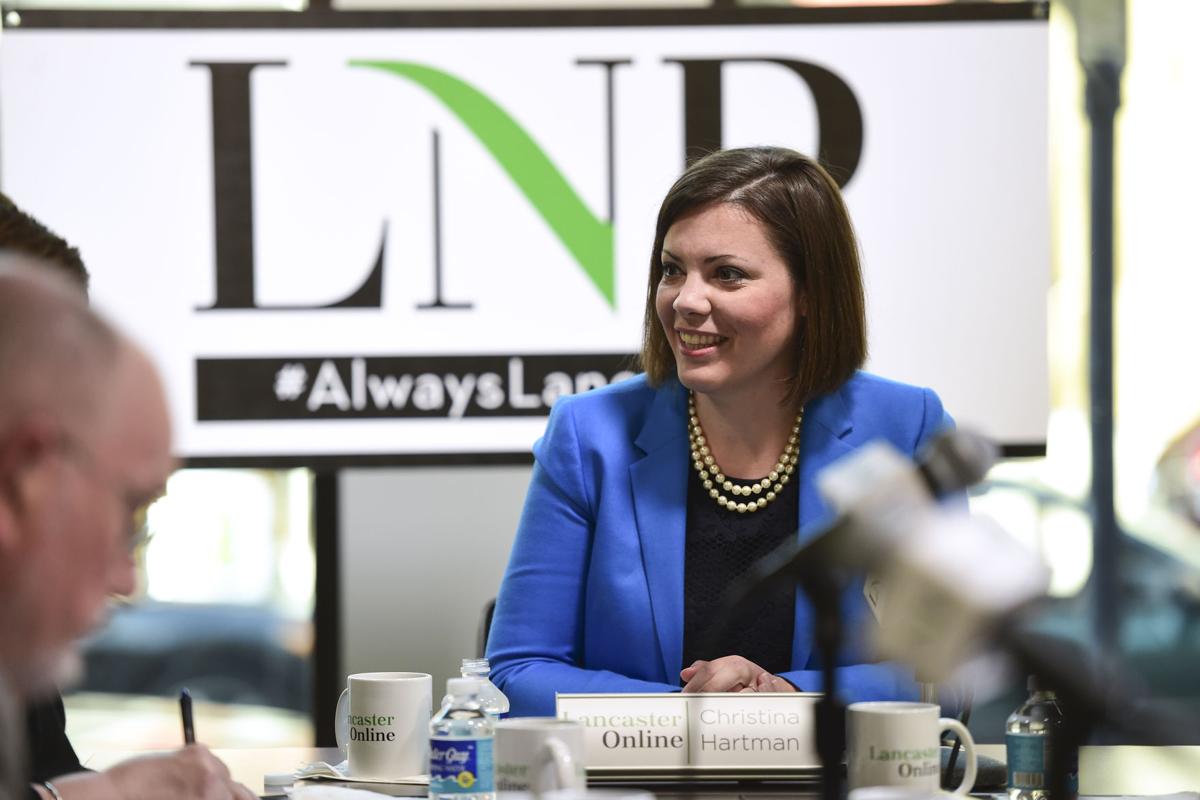 16th U.S. Congressional Democratic candidate Christina Hartman speaks about her platform to the LNP editorial board on October 12, 2016. 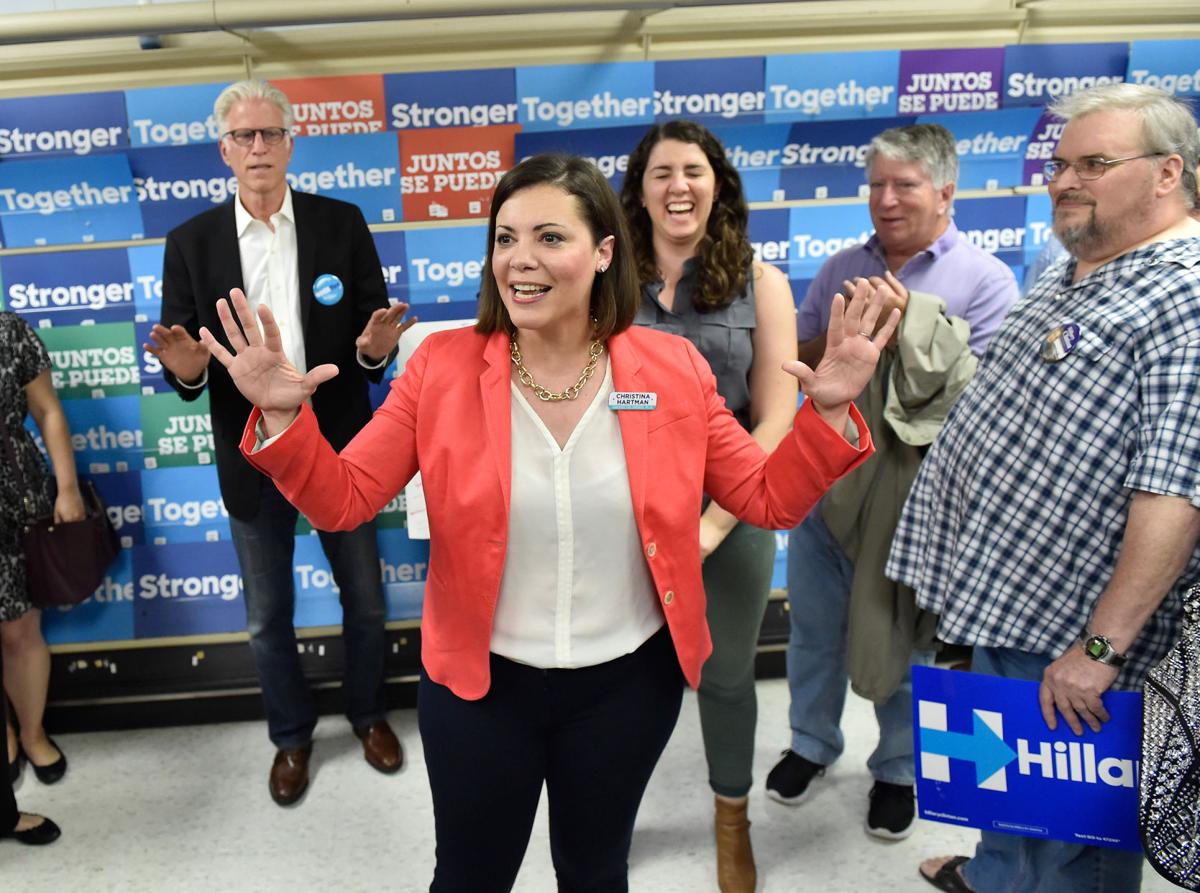 16th U.S. Congressional Democratic candidate Christina Hartman speaks about her platform to the LNP editorial board on October 12, 2016.

Democrat Christina Hartman, seeking to capture the momentum and energy of her unsuccessful campaign for Congress last year, is hoping to run against Republican U.S. Rep. Lloyd Smucker for a second time.

The Lancaster city resident, eight months after losing 43 percent to 54 percent to Smucker in the 16th Congressional District, will officially declare her 2018 candidacy during an event Tuesday in Penn Square.

Hartman will be looking to build on an initial campaign she started almost exactly two years ago — one in which she gained support from local and national Democrats, raised more money and came closer to winning than any previous Democratic congressional candidate here.

“We took the day after the election off and then basically (have) been working hard since that time to capitalize on the momentum and enthusiasm that we gained in 2016,” Hartman said in an interview.

Three other Lancaster County Democrats and one independent have already announced their intentions to run for Smucker’s seat, which covers most of the county as well as parts of Berks and Chester counties.

The crowded, and growing, field of candidates is a significant difference from the last election cycle, when Hartman was the first person to announce her candidacy in July 2015 and only two other Democrats later briefly launched campaigns.

Smucker, who succeeded 10-term Republican U.S. Rep. Joe Pitts in January, has not officially said he is running again but has continued to fundraise.

If Smucker does run again and he and Hartman win their respective primaries, the two would square off for the second time.

Hartman, who turns 40 next month, is a consultant to nonprofits who has spent 17 years working in places such as Afghanistan and South Sudan, raising money and running programs that advocate for human rights and democratic institutions.

As recently as May and June, that work took her to Liberia, where she trained more than 100 women candidates for public office on communications, fundraising and budgeting, she said.

A Manheim Township native, her 2015-16 congressional bid was her first attempt at public office.

She ultimately raised and spent $1.1 million, received an endorsement from President Barack Obama and got support from the Democratic National Campaign Committee.

Her 11-point loss to Smucker, while a decisive victory for the Republican, was the closest a Democrat has come to winning the 16th district in recent memory. Her total fundraising haul was more than Smucker’s, who also benefited from about $1 million that outside organizations spent on his behalf.

RELATED: $4.2M was spent in Lancaster County's race for Congress; $1.4M of it came from 'dark money'

To bridge the rest of the gap, Hartman is relying on a variety of factors — including, the changing demographics of the district, an increase in voter turnout in certain areas and a historical party momentum shift away from who’s in the White House.

She’s also hoping to benefit from having what will now be a familiar campaign to some voters and donors, and from an influx of constituent engagement.

“I want to serve my community, and I want to win this seat in order to do that, but also I want to see Americans engaged again,” she said. “I’m sorry that it took this particular presidency to do that but I’m excited about that for our democracy.”

Hartman, who describes herself as progressive on social issues and moderate on issues of government’s encroachment on business, has remained vocal on Washington politics since her last campaign ended.

She is opposed to the attempted repeals of the Affordable Care Act and the Wall Street-reforming Dodd-Frank Act, both of which are laws she says could be improved but would be “irresponsible” to completely throw out. She also does not support President Trump’s attempts to limit refugees and ban travelers from some Muslim-majority nations.

And she’s remained critical of her former opponent’s record now that he’s representing the district.

“[Smucker] continues to do Trump’s bidding. He’s voting 100 percent with the Paul Ryan and Trump agenda,” Hartman said. “He’s in their pocket and he’s never going to be anywhere else … He’s on thin ice. And people here are holding him to account. And that’s what we’re going to do.”

When asked to respond to Hartman’s statement, Smucker campaign spokesman Mike Barley wrote in an email that the freshman congressman is “focused on jobs and families.”

“He’s already passed a bipartisan bill in the House focused on helping families adopt children in need,” Barley wrote. “That type of early success is rare for a new congressman. He will continue to work hard on behalf of the residents of the 16th district.”

Charlie Klein, a Manheim Township pharmacist who unsuccessfully ran for state House as a Democrat last year, is looking to run as an independent.

The voter registration breakdown of the district is 45 percent Republican, 39 percent Democratic and 16 percent independent or third party.

This story has been updated to include comments from a campaign spokesman for Rep. Smucker.

$4.2M was spent in Lancaster County's race for Congress; $1.4M of it came from 'dark money'

Christina Hartman gets support from key Democrats in congressional race