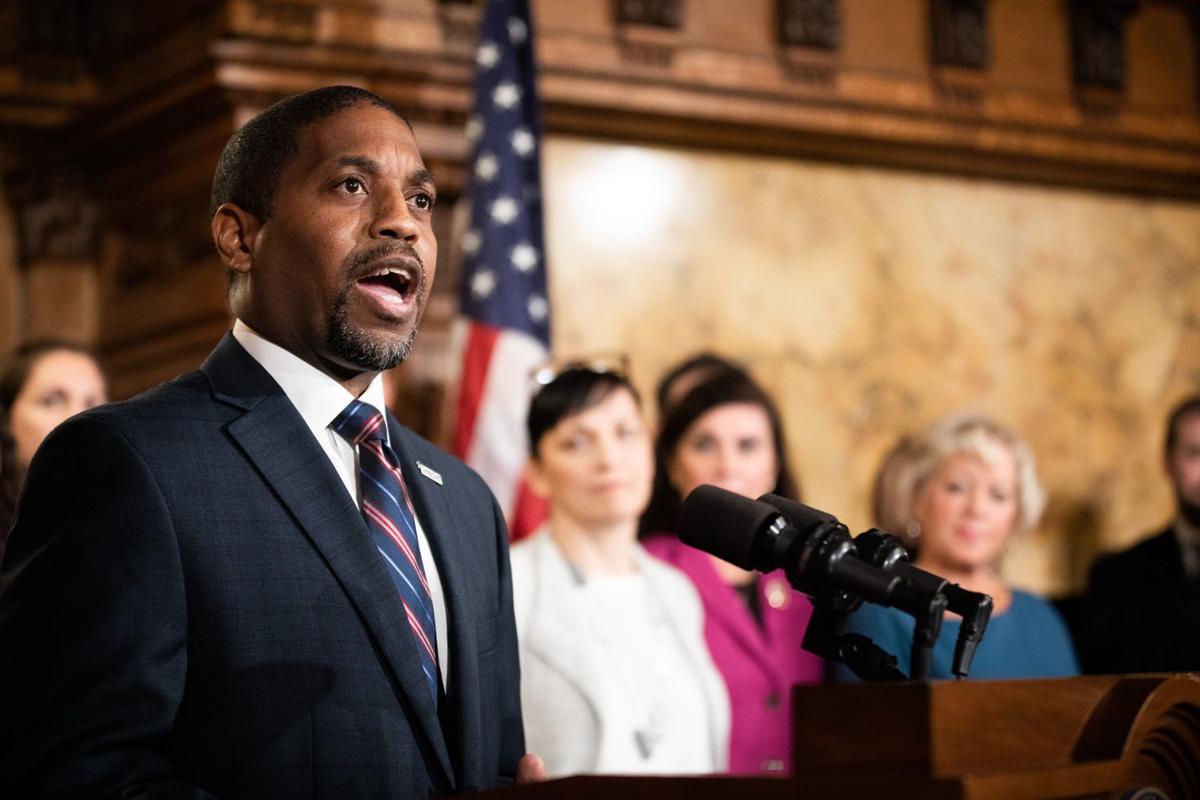 Common Cause Pennsylvania, which helped champion the state’s 2006 lobbying law, was fined $19,900 in January for breaking it. Executive Director Micah Sims (left) attributed the failure to technical difficulties, but state officials disputed that claim.

Spotlight PA is an independent, nonpartisan newsroom powered by The Philadelphia Inquirer in partnership with the Pittsburgh Post-Gazette and PennLive/The Patriot-News. Sign up for our free weekly newsletter.

HARRISBURG — The Pennsylvania chapter of a national advocacy group known for its long-running campaign to improve lobbying transparency and government accountability has been fined for failing to disclose its lobbying expenses.

The state Ethics Commission imposed a $19,900 fine on Common Cause Pennsylvania in January after the group filed a quarterly lobbying report 112 days past the deadline. The group has also been late in filing four other reports since the beginning of 2018, state officials said.

Lobbying reports are one of the only ways the public can see how advocacy groups, special interests, and big businesses are attempting to influence lawmakers. In Pennsylvania, groups are required to disclose the names of any lobbyists they employ, the subject matter they lobbied on, and the total amount of money they spent on it.

Though Common Cause Pennsylvania reports spending only a few thousand dollars each year on lobbying, the Ethics Commission nonetheless expressed its disappointment about the group’s failures, especially since it had helped champion the current law.

“It’s such a shame,” Chairman Nicholas Colafella said after the Jan. 23 vote to impose the fine.

» DONATE NOW and show your support for Spotlight PA’s team of journalists fighting for accountability in the state capital.

When contacted by Spotlight PA, Micah Sims, the executive director of the state chapter, said he was unaware of the fine and was surprised it had been issued. He conceded the filing was late but said it was because of technical difficulties with the Department of State’s website. He said the group had been in “constant communication” with the department about the problem.

Sims said he could not recall receiving any warning from the Ethics Commission and pledged that his organization would fight the penalty in court.

“We will be filing a motion against the penalty because it wasn’t necessarily our error,” Sims said. “It was an error of the Department of State.”

But the Department of State and the Ethics Commission disputed Sims’ account.

The Pa. State Police was warned about possible racial bias in car searches. The agency's answer? End the research.

Laura Weis, a spokesperson for the state department, said in a statement that at no point had Common Cause Pennsylvania made it aware of any technical issues or problems filing its expense report.

Weis also said the department sent two emails to the organization within a week of the missed deadline. The Ethics Commission said it sent a letter on Aug. 29 by certified mail, addressed to Sims, warning him that his organization would be fined if it didn’t file within 30 days.

“I have no information and no knowledge that Common Cause tried to file,” said Rob Caruso, executive director of the commission.

» SIGN UP for Spotlight PA’s free weekly newsletter and receive exclusive looks at our work, the most important news from the Capitol, and a roundup of can’t-miss stories from across Pa.

On Jan. 31, eight days after Spotlight PA first inquired about the fines, the board chair of Common Cause Pennsylvania, Brian Cullin, said the organization’s failure to file the reports on time “is completely contrary to what we stand for.”

“It doesn’t matter that the amounts we report are small — we are still obligated to file, and to file on time,” Cullin said. “We failed to do that, and we are very sorry.”

Cullin said he was not aware of the failure until Spotlight PA’s inquiries. In the future, he said, he will personally file the reports and send them to the Common Cause national office to ensure proper oversight.

Who's Safe? Who's Not? Breaking down the 2020 Pennsylvania House and Senate contests

“This will not happen again,” he said.

Cullin said Common Cause Pennsylvania is interested in negotiating a smaller fine from the Ethics Commission, but presently has no intention to fight the penalty in court.

In 2018, the legislature imposed stiffer penalties for lobbying groups that file late, and that has led to better compliance, said Caruso, of the Ethics Commission. Before the change, the commission fined about 20 groups each year. In 2019, it fined about 10 of the estimated 1,700 groups.

“So overall we are seeing good compliance,” Caruso said.

Sims said Common Cause Pennsylvania has long complied with the state’s lobbying disclosure law and the late filing was an anomaly.

But Weis, the department spokesperson, said the group was late in filing four other quarterly expense reports since the beginning of 2018. Two occasions resulted in formal notices of non-compliance by the Ethics Commission. In each of those occasions, however, the group filed before the commission issued a penalty.

Sims said he didn’t know why the group had missed the deadlines. But he noted that, with an annual budget of $200,000 and two full-time staff, they spend little on lobbying. According to the Department of State’s website, Common Cause Pennsylvania spent $5,600 in 2019 on lobbying.

That’s about a quarter of the fine it now owes for filing late.

They live and work in the top tier of the pecking order in Pennsylvania politics. They raise lots of campaign money. They amass clout on their…

HARRISBURG — With $4 million in state funding, Pennsylvania is buying ads and preparing to award grants to nonprofit organizations, grassroots…