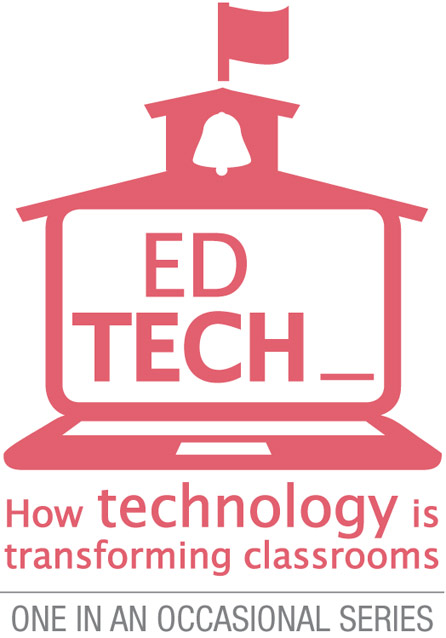 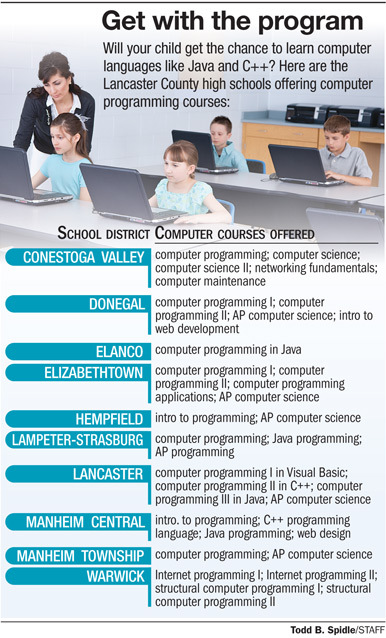 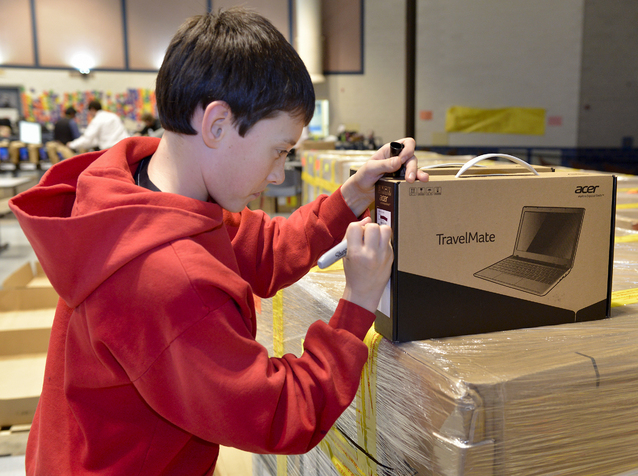 Peanut butter and jelly. Silver and gold. Sugar and spice.

Some pairs just go together.

His friend Nick Joniec is a hardware guy.

They're both part of the student help desk team that has been key in the preparations for a 1:1 computing program in which every high school student gets a district-issued laptop.

He spoke from a small media lab attached to the library, where his help desk teammates were loading software onto laptops for a faculty training.

Penn Manor isn't the only local school with a laptop for every student. Pequea Valley, Conestoga Valley and Elanco school districts all have some form of 1:1 programs. Pequea Valley also has a student help desk, called the Apple Core team.

Penn Manor's IT director, Charlie Reisinger, said having student tech assistants allowed the district to start the 1:1 program without hiring new IT staff.

Conestoga Valley High School started its 1:1 program in August without hiring new staff; however, a school representative said that the board is considering adding positions in 2014-15.

"Essentially they are junior members of my technology staff," Reisinger said of the students on the help desk team.

Penn Manor's 1:1 program started with a pilot phase in the fall. Ninety-four students got an Acer TravelMate to use in school and at home.

The rest of the high school's 1,700 students will get laptops at the start of the second semester, later this month.

The computers are equipped with Linux, an open-source operating system.

To prepare all the laptops with the proper settings and software, Penn Manor's teenage tech experts went through a process called "imaging" the computers.

"What we have is ... an automated system that allows us to specify what we want on the machine. Then it makes a file that's a master image of the computer's hard drive," said Joniec.

Classmate Andrew Lobos wrote the software that builds that master image. He also wrote software that allows the image to be pushed from a server to dozens of other computers at one time.

"There's a couple of projects out there already that do imaging, but they don't do it for Linux or it's slow and clunky," said Lobos.

He added, "A lot of the imaging solutions out there don't multi-cast, so each machine goes and connects to the server and downloads its own copy. This would take an hour or two that way."

Lobos' program does it in less than 10 minutes.

Starting with a pilot phase allowed the help desk team and the IT staff to work out the kinks in the 1:1 system.

For instance, the initial software package included an audio recorder that was too complicated for foreign language classes.

"They needed something that was simpler than the current software. So I found a program that's basically just a button where you push record," said Aaron Jandzio.

In December as the official roll-out approached, the team felt confident about sending 1700 laptops "into the wild," as they called it.

Being on the help desk team also means that Thomas, Joniec and four other seniors are the first-responders when their peers encounter laptop trouble.

"We have two options at the moment. They can either sign out of their classes and just walk in here and talk to us face-to-face, or they can create a ticket," Thomas said.

The ticket system is a web program that allows students to submit problems or questions and get support online.

The help desk team programmed the ticket system themselves.

Besides technical skills, the students on the team learn communication skills.

Thomas said it's their job to help classmates use the laptops without scaring them.

"It's hard for someone like me to get out of all the fancy technical stuff and show kids how to use computers," he said.

Reisinger called the real-world use of their work "pure learning."

"Learning comes from our experiences. We couldn't write a curriculum as rich as this, because we don't know what's going to happen and that's what's exciting for us and the students," he said.

Lobos, who has been giving tech tutorials to district staff since middle school, hopes more of his classmates will give programming a try.

"I think everyone should learn how computers work, because they're using them every day and using them as closed boxes that you press the button and it does the magic. How's that magic happen?" Lobos said.

"I get a lot of satisfaction from writing programs and seeing it run and work and do something," he said.

Kara Newhouse is a Lancaster Newspapers staff writer who covers K-12 education trends and policies. She can be reached at knewhouse@lnpnews.com or (717) 481-6103. You can also follow @KaraNewhouse on Twitter.