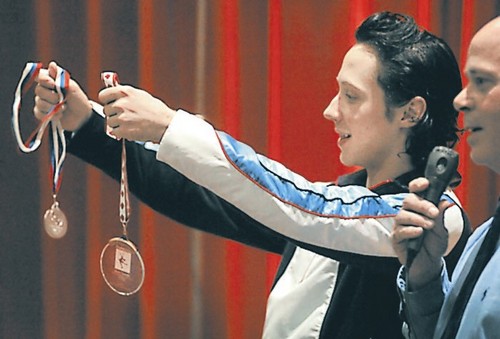 In this photo from 2006, Johnny Weir shows some of his medals to the students at Quarryville Elementary School, where he attended growing up in Quarryville. 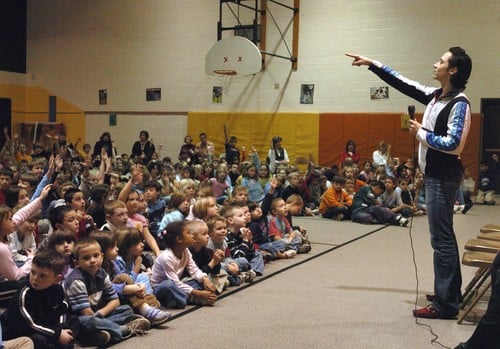 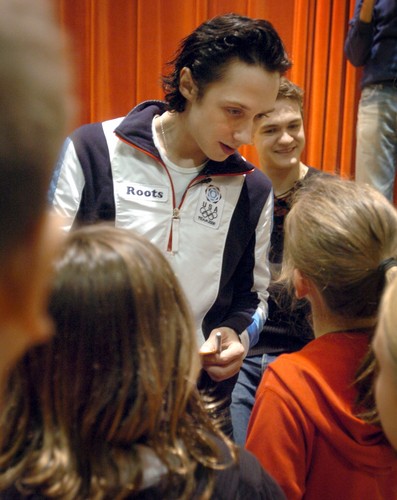 In this photo from 2006, Johnny Weir shows some of his medals to the students at Quarryville Elementary School, where he attended growing up in Quarryville.

I was like a lot of other students, Weir said during a visit to his former school.

But when the 22-year-old addressed students at two assemblies in the all-purpose room Friday, Weir was hardly just another alumnus.

The students were listening to an Olympic ice skater and three-time national skating champion who routinely travels the world.

They were in awe of Weir, who gave them some advice and a candid account of the highs and lows of life as a professional skater.

Its so cool when I look down at you guys, Weir said. I may be looking at the next Donald Trumps and Britney Spears.

Dressed in an Olympic workout jacket, designer jeans and red suede loafers with gold trim, he told the students they can be whatever they want to be — as long as they have a dream and work hard to achieve it.

You can do anything, even when you start out in a town that has buggies and horses, Weir said. I grew up and went to school here, and I wanted to skate in the Olympics — and I did. Anythings possible.

Weir started his career late, at age 12, practicing moves on roller skates around his home after moving to Coatesville.

In 1996, the Weir family moved to Newark, Del., to be with Johnny as he trained with skating coach Priscilla Hill.

Weirs first major victory came in 2001, at age 16, when he won the World Junior Championships.

The 2003-04 season was the turning point for Weir, who qualified for the U.S. Figure Skating Championships by winning the regional and sectional championships.

He then rallied at the 2006 Nationals, winning his third consecutive title, which automatically qualified him for the U.S. Olympic team.

During the 2005 Winter Olympics in Turin, Italy, Weir placed fifth overall in the figure skating competition. Friday, he told his audience he failed to do his best at the Olympics.

I could have done better, he said. Knowing the whole world was watching was very hard.

But anything that knocks you down can make you stronger. Theres an upside with every downside, and I plan to go to the next Winter Olympics and skate again.

In Moscow two weeks ago, Weir placed second in the figure skating Grand Prix, earning his second gold medal of the season.

When OBrien told the students they could ask Weir questions Friday, their hands bolted up.

Are you rich? someone asked.

Others wanted to know if he has fans.

Weir said he has fan Web sites in America, Japan and Russia.

Another student asked how a skater becomes good.

You cant be afraid of falling down, Weir said. And you have to work hard in the beginning so you dont have to work as hard when youre older.

He also told the students hes had several broken bones, including stress fractures in his leg and fingers.

But thats OK, Weir said. It makes you train harder to get back on your feet.

He told them he would ultimately like to live in New York City, but that moving back to Quarryville could be a good idea, too, which prompted some of the children to smile and say, Yes!

Weir also told the students he plans to donate books to the school library.

Yeah, I want to get you guys some Harry Potter and other books that I used to enjoy, he said. I want you guys to have them because Im proud I went to school here — and so should you (be).

Weir lived with his family in southern Lancaster County for 10 years. The Weirs still have friends and family here, including Johnnys grandparents, Robert and Marcella Moore of Willow Street, and his aunt and uncle, Diane and Joel Neff of Quarryville.

During Weirs exotic travels, he became a Russophile, admiring the style of Russian skaters and their native language. He named his miniature long-haired chihuahua Vanya, which means Johnny in Russian.

In the Turin Olympics, Weir became known for his flamboyant moves and costumes — one outfit was called The Swan — and for speaking his mind.

He once likened his costumes to an icicle on coke and a Care Bear on acid.

But Weirs talk Friday was relatively low-key. The only time his sense of style became an issue was when OBrien complimented him on his red shoes. After the comment, many of the students stood up to get a closer look at the suede loafers. The Johnny Weir who appeared at Quarryville Elementary Friday was rather modest and filled with practical advice.

He admitted theres not much he can do to get over his nervousness before a performance. If Im nervous, Im nervous, he said. The best thing for me is to get on the ice.

Weir told the students he still has dreams — to reign supreme in the next Winter Olympics and perhaps attend college. Getting the things you want always means hard work, Weir said. You have to work hard so you can play later.