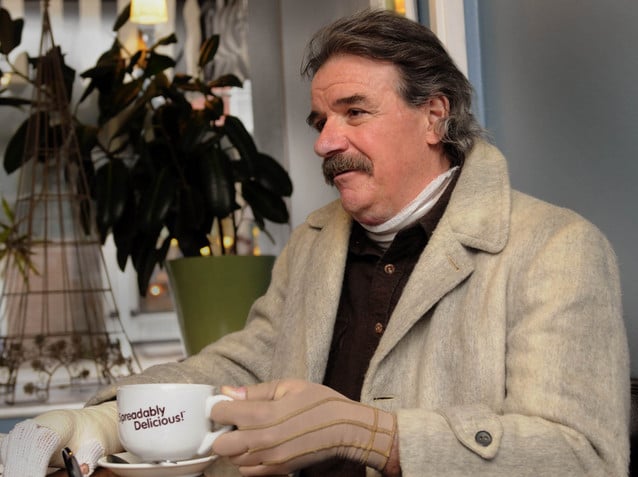 Steve Murray, at Rachel's Creperie, talks about the 2011 fire, his continuing recovery from burns and his plans for the future. (Jeff Ruppenthal/Sunday News) 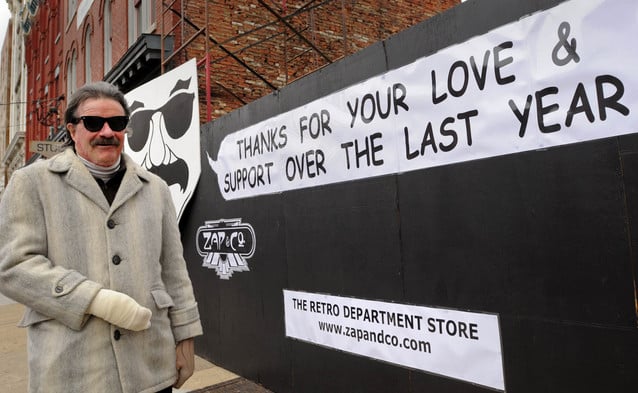 Steve Murray, at Rachel's Creperie, talks about the 2011 fire, his continuing recovery from burns and his plans for the future. (Jeff Ruppenthal/Sunday News)

Mr. Zap and Hilda the mannequin are on the mend.

But they still have a long road to travel.

It was a year ago that Zap & Co., a haven for fans of vintage clothing and ephemera, went up in flames, erasing an almost 40-year presence in downtown Lancaster.

Materially, the loss was literally priceless. Only the façade of the building was left standing, and that had to eventually be taken down. Hilda, the store's signature dress dummy that greeted visitors at the doorway for years, was salvaged. Otherwise, all was gone.

Yet as bad as that was, fans of Zap & Co. came close to losing what many considered the store's biggest treasure, Steve Murray, Zap's founder, owner and heart.

Murray, now 60, was found unconscious in the rubble by firefighters, one of whom mistook Murray for a male mannequin at first.

"I have no idea" about what happened that night said Murray, in a recent interview at Lancaster's Prince Street Café, where he was joined by his sister, Barbara Rogers. Murray, who had first-floor living quarters in a warehouse in the back of Zap, remembers nothing and only knows what was later told to him by Rogers and others.

He speculates that he might have been trying to reach a fire extinguisher that was stored at the top of the basement stairs. Or that maybe he was trying to get to the basement itself, where there was an exit to safety. Murray doesn't know.

"I fell and smashed the side of my head open," he said.

"They did mouth-to-mouth and CPR," Murray said of rescue personnel. Apparently, "I sat up in the stretcher for two or three seconds and then collapsed." Had Murray been in the smoke-filled building just three or four minutes longer, Murray was told, "I would have been gone."

He was rushed to Lancaster General Hospital, but once the severity of his condition was determined, he was taken by medical helicopter to Crozer-Chester Medical Center, which has a well-known burn facility in Delaware County, for treatment.

Murray said he was burned from "the center of my chest all around to my spine - 30 to 35 percent of my body." Both of his arms and hands were burned; his right hand alone sustained fourth-degree burns. "That's down to the tendon," said Dr. Mary Lou Patton, medical director of the Serious Burn Center at Crozer-Chester.

In some ways, however, Murray was lucky. Just a few years ago, he said, having 20 percent of one's body burned would have meant death.

Murray was in a coma for six weeks. In the case of many burn victims, that happens due to a combination of pain medication and the patient's susceptibility to infections because of skin loss, Patton said. "They are very sick," she summed up.

Murray underwent the first of 15 surgeries under the care of critical care surgeon Dr. Linwood Haith, "one of those burn surgeons [who should be] on Mount Rushmore," Murray enthused.

It was during the next phase - post-coma morphine treatments - in which "clarity came as they started weaning me off this morphine. I remember lying in bed, looking around. I saw these nurses walking around."

Thus began a surreal dialogue, of "Where am I?" followed by Murray being told he had been burned in a fire. He still had no memory of the blaze, which, in retrospect, was a good thing, Murray said.

He also had no idea of what had happened in his home community in the wake of the fire.

Up and down the 300 block of North Queen Street, home to a collection of shops as eclectic as Zap & Co., merchants displayed signs asking people to pray for Murray's recovery. Flowers and notes were left at the site of the ruined store.

But on a larger scale, locals gathered for a prayer vigil at Lancaster's First United Methodist Church, uniting folks who knew Murray, but didn't necessarily know each other. In March, some 450 people gathered at the Elks Club on North Duke Street for a "Stevent," which raised around $40,000 for Murray's medical and financial costs.

That was a comfort to Rogers, who lives in Florida but has been shuttling back and forth to take care of Murray's doctor appointments and other matters.

"Lancaster gave me so much ammunition to use," Rogers said, " to be able to help him feel [cared about] ... as he was coming out of this cloud."

Only after three months "was I able to see this stuff," Murray said of the personal cellphone, computer and media coverage.

"The video of the building burning was like a 'Twilight Zone' episode," said Murray, referring to the 1950s science-fiction television series. "It was surreal to me."

And there are things to rise from the ashes, Murray said, both business like and personal.

Murray is now dealing with what are called "scar bands." They involve burned tissue that thickens. They will heal, but much physical therapy work will be involved.

In the meantime, there are other things in which to become involved. Murray is planning to rebuild Zap & Co. on its old site. He hopes to enlist the help of Doug Campbell, an architect and a tenant of Murray's who lost everything - including his pet cat - in the fire. The new Zap might pay homage to some of the old stores that once graced North Queen Street before they were leveled during the urban renewal movement of the 1970s.

Murray has long prided himself as a man of opinion, actively involved in downtown and county issues. He cites as one example his past participation in meetings of the Hourglass Foundation, a local think tank that concerns itself with growth management and improving community life.

"I used to attend those things religiously," Murray said of those forums.

He's hoping to start doing things such as that again on a regular basis. And when he talks about that, Murray sounds like his old self.

He doesn't hesitate to talk about how downtown Lancaster should be marketed, or his beloved 300 block of North Queen being featured on a recent episode of "FYI Philly," a regional what's-new-what's-hip television show.

"I'm still physically really hampered, but mentally, I'm trying to get back into what's going on here. ... Being in business downtown and being a social activist go hand in hand," he said.

Murray sees that as a kind of payback for all the support he's received.

"It's just been a whole series of positive things that have come out of this tragedy. I've been doing my best to thank people. I know there are thousands. [I hope] everybody understands how much I appreciate the incredible good will from this community."

These days, Murray is recovering at Brereton Manor, a care facility in Washington Boro. The owner, Bill Boyd, was a customer at Zap and has been like "a guardian angel," Murray said. Hilda the mannequin is at Brereton Manor as well.

Murray also enjoyed some recent good news: His right hand is making better progress than experts thought it would. Murray credits Dr. Randall Culp, a hand surgeon with the Philadelphia Hand Center, which has an office in King of Prussia, for that. Culp is a hand and wrist consultant for the Philadelphia Phillies baseball team.

As it turns out, "he does not need to do surgery on my knuckles," Murray said, though he remembers that back in December of last year, Culp was "a little apprehensive" when he consulted with Murray. "He was really surprised at the progress I've made."

Not to be left out, Murray said, is his daughter, Katherine, 18.

"She's been an amazing force in my life," he said.

"She's my only child. She kept vigil, with Barbara," Murray said of his sister and daughter.

Murray said people have asked him about why he survived. He has a characteristically opinionated answer.

"There must be some reason. ... I guess there is. I need to be back downtown.

"I've got some unfinished business."

And in a follow-up interview at Rachel's Café & Creperie, which is next door to the Zap site, Murray said, "I'm not shutting up.

Zap & Co., 315 N. Queen St., is planning to rebuild, possibly as early as this spring. The store is looking for vintage clothing - even if it involves items from past sales - to rebuild inventory. Contact zapandco@aol.com or visit Steve Murray on Facebook.