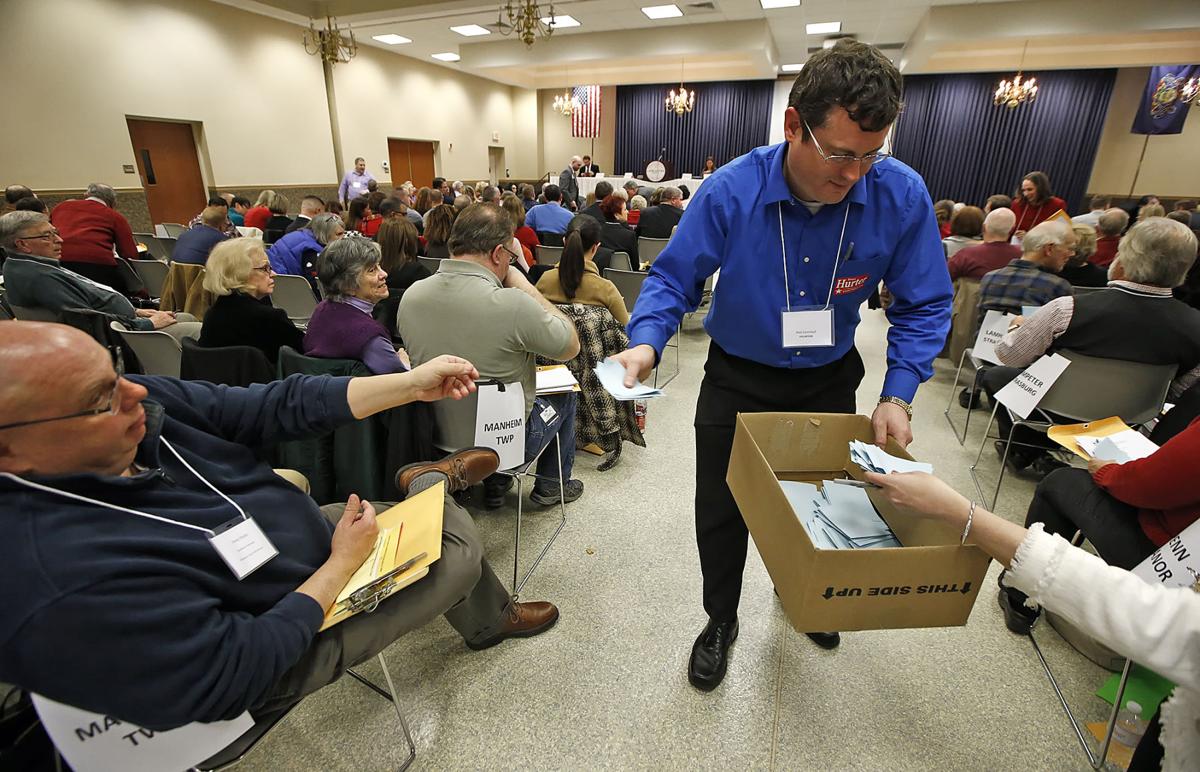 Volunteer Nick Cammauf, collects ballots after a vote for Court of Common Pleas judgeship, during the Republican Committee of Lancaster County endorsement convention at the Farm & Home Center in Lancaster Tuesday February 14, 2017.

A majority of the Elanco Republican Committee voted Wednesday night to support state Rep. David Zimmerman over challenger Glenn Yoder, meaning he will receive the party’s endorsement next week.

Yoder, former Eastern Lancaster County School Board president, took on Zimmerman in a rare intraparty challenge for the 99th House District seat, noting Zimmerman’s past ethical conflicts as his motivation to run. Zimmerman was fined $14,000 in 2018 for using his prior position as an East Earl Township supervisor to advance a land deal in which he had a financial stake.

Zimmerman received 14 votes in the straw poll, while Yoder secured four, according to the Republican Committee of Lancaster County’s website.

Ephrata Area’s committee voted Wednesday night as well, giving all 13 of its votes to Zimmerman.

Yoder said after the vote he had not decided whether he will continue to challenge Zimmerman.

The Elanco committee met behind closed doors with each candidate at the Ephrata Township Building, quizzing the candidate on their values and their backgrounds. The committee asked Yoder about his time as school board president and whether his career as a real estate agent impacts his views on farmland preservation, Yoder said.

Zimmerman said he was asked about what he’s done to stop government overreach during his time in the General Assembly and his past ethics violation.

Zimmerman said he explained the ethics violations to the committee and that he voted on a land deal he should not have.

“Would I like to do that different from 10 years ago? Yes,” he said after meeting.

The process is designed to inform the Elanco committee members about which candidate has the most support among them, and thus should be chosen at the county endorsement convention.

With a challenger vying for Zimmerman's seat, Elanco GOP will weigh options at straw poll this week

Over the weekend, Yoder sent  to committee members a letter and several copies of articles about Zimmerman’s past ethics violation and how he had failed to pay taxes on his Airbnb rental, according to a packet obtained by LNP | LancasterOnline. He also included portions on the ethics violation.

“These lapses in competence and/or judgment should make us think long and hard before further embarrassment about his ability to use judgment representing us,” Yoder wrote in the letter to the committee.

On Monday, the Pequea Valley area committee met, and its four members in the 99th District voted in favor of Zimmerman.

The 14 votes for Zimmerman on Wednesday give him the necessary votes for him to be endorsed at next week’s Republican Committee of Lancaster County’s endorsement convention.

Despite a $14,000 state ethics fine revealed since he was last elected, Lancaster County Republicans endorsed Rep. David Zimmerman for a fourt…

A Republican who raised questions about Rep. David Zimmerman’s ethics and said he intended to challenge the incumbent in the GOP primary has s…