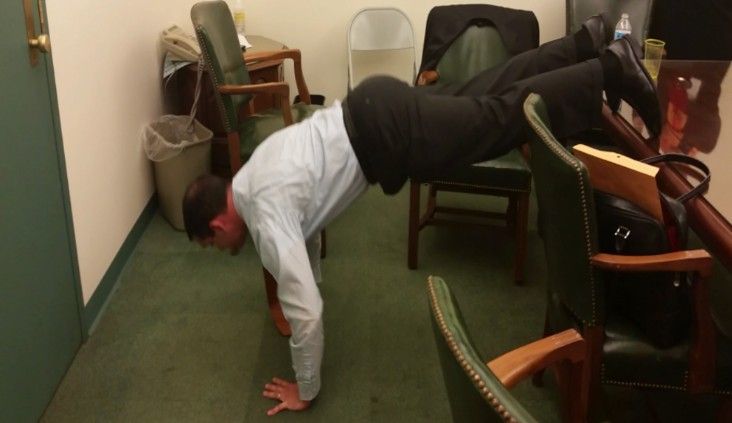 State auditor general Eugene DePasquale does a push up in LNP's conference room. 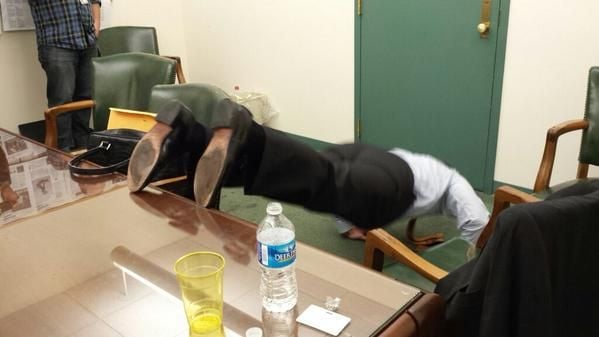 Eugene DePasquale demonstrates one of several styles of pushups that help keep the attorney general in shape.

State auditor general Eugene DePasquale does a push up in LNP's conference room.

Eugene DePasquale demonstrates one of several styles of pushups that help keep the attorney general in shape.

Ryan, a U.S. Congressman from Wisconsin and Mitt Romney’s running mate in the 2012 presidential campaign, is a vocal proponent of P90x workouts — a trait he shares with first lady Michelle Obama.

The popular home workout regimen designed by Tony Horton is a 90-day general fitness program designed to get participants in better shape with 30 minutes of intense exercise each day.

Depasquale, who was in Lancaster Thursday to discuss auditing issues, including an upcoming scrutiny of spending at Lancaster-Lebanon Intermediate Unit 13, said he plans to run for reelection in 2016 if his health is good.

He imagines it will be, he said. And he took the opportunity to crow a bit about his impressive numbers.

He also put words to deeds.

DePasquale, a York County Democrat and former state House representative, doffed his jacket during an editorial board meeting at LNP, got down on the floor and demonstrated airborne, crawl and plyo pushups, among others.

“You want airborne? I’ll  give you airborne,” he said. “Whatever you want.”

He said he’d “be stunned” if Ryan can do as well.

“I think I have the best P90x3 numbers of any state auditor in the country,” Depasquale said. “That’s a bold declaration.