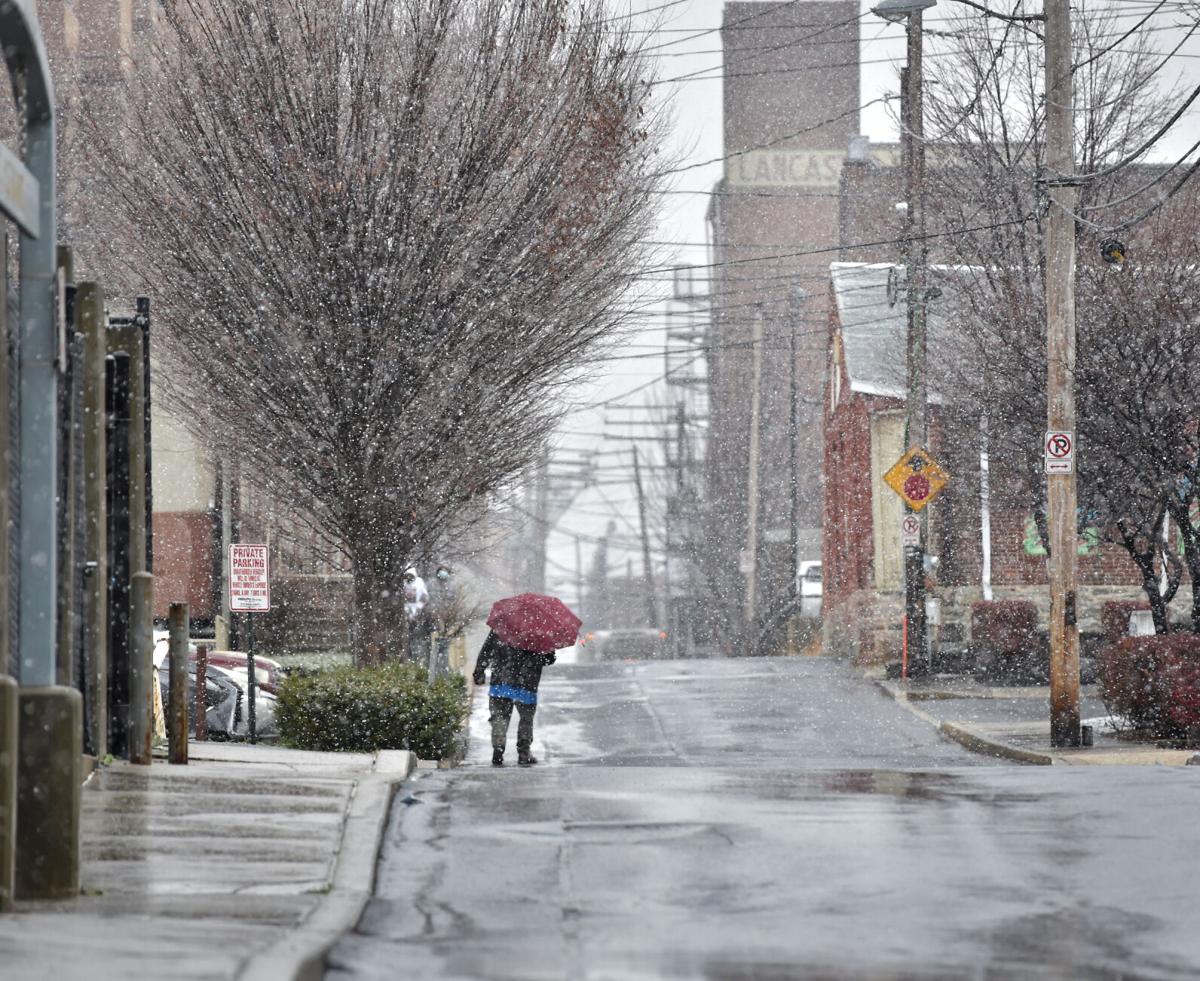 Snow starts to fall mid-morning in Lancaster city where a pedestrian was armed with an umbrella on the third block of North Grant Street on Monday, December 14, 2020. 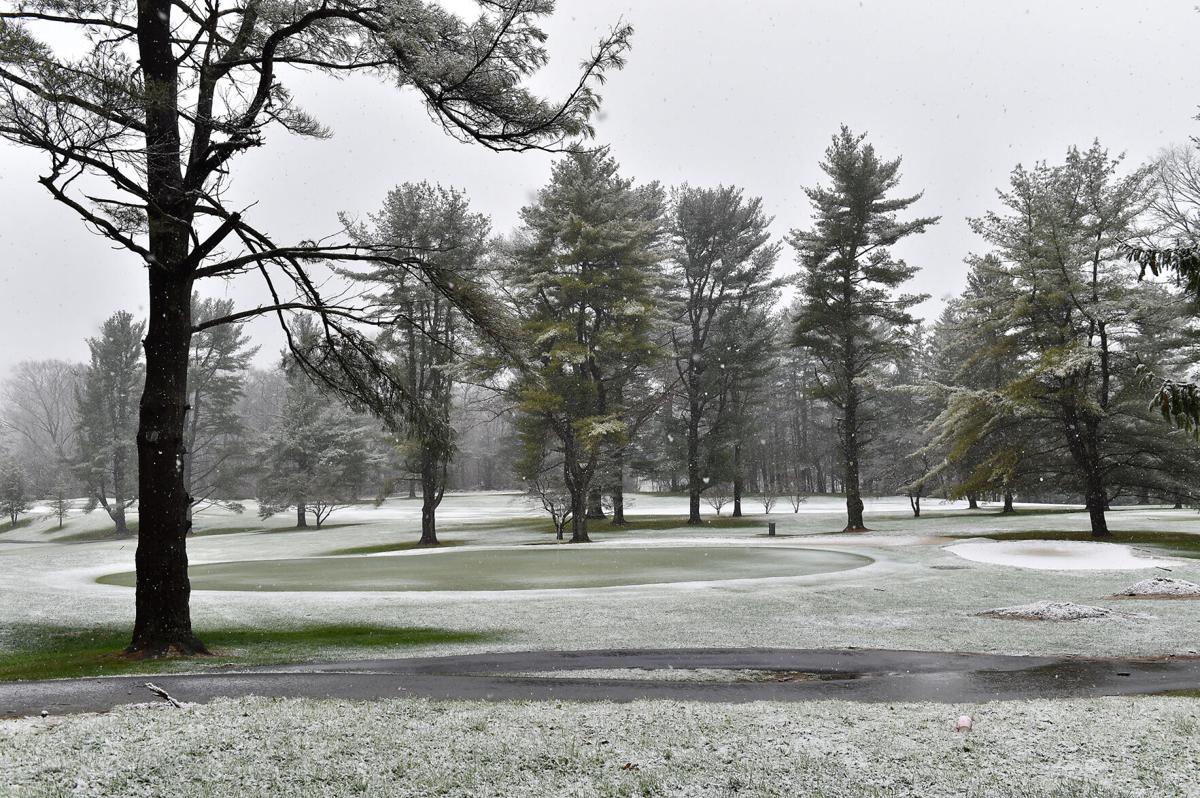 Snow starts to fall mid-morning in Lancaster city where a pedestrian was armed with an umbrella on the third block of North Grant Street on Monday, December 14, 2020.

For live updates as the storm moves into the county, click here.

Lancaster County is bracing for the potential of more than a foot of snow starting Wednesday.

The National Weather Service in State College issued a winter storm warning for Lancaster County on Tuesday. It goes into effect 10 a.m. Wednesday and lasts until 7 a.m. Thursday.

Bands of heavy snow could drop 2 to 3 inches per hour late Wednesday, according to the weather service, and the county could see up to 18 inches by Thursday morning.

Check out closings and delays here.

Eric Horst, storm analyst and media meteorologist who recently retired from Millersville University’sWeather Center, said in a tweet on Tuesday that Lancaster city and south to the Maryland border could see significantly less. While 18 inches is likely in some central Pennsylvania counties, he said, sleet and ice could mean the city sees 6 to 12 inches, with higher amounts possible in the northern part of the county.

The Pennsylvania Department of Transportation and the Pennsylvania Turnpike Commission say travel could be hazardous and ask motorists to stay off the roads and heed travel conditions.

Gov. Tom Wolf signed a proclamation of disaster emergency, saying the proclamation will make it easier to deliver COVID-19 vaccine.

Here’s what you need to know ahead of the storm:

Are snow days for schools a thing of the past?

It depends who you ask.

Two school districts – Columbia Borough and Penn Manor – already planned to transition online due to a spike in COVID-19 cases. Penn Manor’s districtwide closure is expected to only last the day, so if the snow remains an issue on Thursday, the district would implement a traditional snow day. All Columbia Borough students are learning online through the holiday break.

Eastern Lancaster County School District, meanwhile, plans to squeeze in its regularly scheduled early dismissal Wednesday. Students are expected to dismiss by 12:30 p.m., right when the snow is about to start. A traditional snow day is possible Thursday if necessary.

Is this type of snowfall in December unusual for Lancaster County?

“Here in Lancaster, we've had only TWO 12"+ storms before Christmas (in 95 years)… so one's out on a limb with a saw making an outright call for 18" in Lancaster city...as a few folks have!” Horst said in a tweet Tuesday afternoon.

Is the pandemic or any of the governor’s orders impacting street-cleaning or plowing?

Not in Lancaster city because plow operators drive solo, according to Matt Metzler, deputy director of public works.

How have Lancaster County hospitals prepared for the winter storm?

UPMC Pinnacle has extra supplies of water, food and medical equipment to serve patients during severe weather conditions, Kelly McCall, a spokeswoman for UPMC Lititz, said in an email to LNP | LancasterOnline Tuesday. The health care system also has back-up generators in the event of power failure and has arranged sleeping accommodations for staff who may need to stay overnight.

“With the possibility of severe weather conditions in the south-central Pa., UPMC officials are meeting nonstop to safeguard minimal disruption to operations and full staffing for UPMC Pinnacle facilities and services,” McCall said.

Do each of the hospitals have sufficient beds for potential storm-related patients?

Do local hospitals anticipate emergency departments being overwhelmed with the convergence of snow emergencies and COVID-19 crisis?

Health officials said they will accept patients as normal.

At least one hospital – Penn Medicine Lancaster General Hospital – reports emergency room use down in the pandemic, in part because of stay-at-home orders.

Will the storm affect COVID testing sites? Will testing still be available?

Will shelters be open?

Yes, but there is a screening process to be permitted to enter.

Logal organizations are working on ways to help the homeless find shelter from the inclement weather while slowing the spread of COVID-19.

Some shelter coordinators said anyone looking for a place to stay should first call 211 to find the right location for them. Some of the shelters have less space this year because of COVID-19 mitigation efforts.

“We will do the pre-screening for these shelters and help people find the right place for them in terms of location and available space,”Pennsylvania 211 East - PA 211 East director Toni Gainersaid.

Some shelters are willing to assist walk-ins.

“We expect very few (walk-ins),” Columbia Shelter outreach services coordinator Lori Flick said. “We have a big outreach program so they could always get a hot meal from us, whether they are staying with us or not.  If they stay, then we will be placed in quarantine just as a precaution, but we are going to meet their needs with food, clothes, blankets or whatever they need.”

At Elizabethtown Community Housing & Outreach Services, 398 N. Locust St., Elizabethtown, guests should call 717-361-0704 for an intake session before they come in.The winter shelter can accommodate 30 people and has two rooms for families. Hours are 6:30 p.m. to 8 a.m.

“They will have to be screened first, but someone could walk in and get shelter from the approaching storm as long as they are from the Elizabethtown, Rheems, Marietta, Mount Joy, Maytown and Bainbridge area,” winter shelter coordinator Chrissie Raffensperger said. “We will do our best to find services and resources they can access.”

The Lancaster County Homeless Coalition will have a warming station today from 9a.m. until 4 p.m. at Tabor Community Services, 308 E. King St. in Lancaster. The coalition’s outreach team will be doing referrals to shelters all afternoon for anyone who needs a place to stay overnight through Thursday morning.

How is the Lancaster County Emergency Management planning for the storm?

“Tomorrow will be pretty much a normal day for us even into the evening and overnight. We are keeping a close eye on the forecast and will share that information with all local emergency coordinators in each municipality.,” director Phil Colvin said Tuesday.

The county doesn’t have plow trucks or heavy equipment typically needed during a snowstorm, according to Colvin.

“In any major event like this one, our role is to support and help municipalities with coordination of services,” Colvin said.

How do recent winters stack up against the worst snowstorms in Lancaster County history?

Gov. Tom Wolf and officials with the state’s transportation department, turnpike commission and emergency management agency on Tuesday urged people to stay home if they can. If that’s not possible, officials recommend slowing down and increasing the following distance.

For road closures and conditions:https://511pa.com/. (This also will show what’s been recently plowed and where trucks are.)

Dave Thompson, spokesman for PennDOT’s District 8, which covers Lancaster County, said over the past several years, the agency has been using a tiered system to limit traffic on interstates, depending on conditions, so plows have an easier time of clearing lanes. Tractor-trailers would be the first vehicles kept off interstates, he said.

Locally, the agency has enough workers, plenty of equipment and lots of salt, Thompson said.

Equipment operators have driven routes to make sure they’re familiar with them, he said.

In Lancaster County, PennDOT is responsible for 2,517 miles of snow lanes on state highways, meaning the total mileage of a roadway, each lane in each direction.

In Lancaster city, 14 vehicles have been converted from picking up leaves to plowing snow and salting, Metzler said.

Beside the plow operators, the city has another couple dozen employees from parks, facilities and public works departments poised to tackle the snow. Workers will be working 12-hour shifts starting at 7 a.m. today.

Metzler is bracing for the worst, but hoping for the best, knowing that a decent amount of snow is expected.

“We had a conference call at 10 a.m. with the National Weather Services in State College,” he said Tuesday. “Basically, the best-case scenario, we could expect no less than 9 inches, probably more in the 12- to 16-inch range, is what they feel will be brought to Lancaster.”

Winter preparedness: A checklist of things you should know, have or do

This is an article from LNP's archives.

As with Lancaster city’s drivers, PennDOT’s plow operators drive solo, so COVID-19 isn’t really a factor. Plus, with all the monitors inside, there’s not much room for a second person, Thompson said.

Lancaster County eyes another $3.2 million in aid to struggling businesses

The Lancaster County commissioners are set to approve another $1.2 million in grants to struggling local businesses today, with another $3.2 m…

Here's how much snow Lancaster County could get today: forecasts range throughout county

Forecasts vary on how much snow Lancaster County can expect today, as the storm that's set to roll through the county will likely impact the n…

Watch: Here's what the snow looks like throughout Lancaster County [video]

Today's forecast for Lancaster County includes snow, but just how much depends on where you are in the county -- and what time it is.

This post will be updated throughout the day with real-time reports of what Lancaster County is looking like.

'Safe from the cold weather, but now it’s also safe from a pandemic': Shelters in Lancaster County grapple with COVID-19