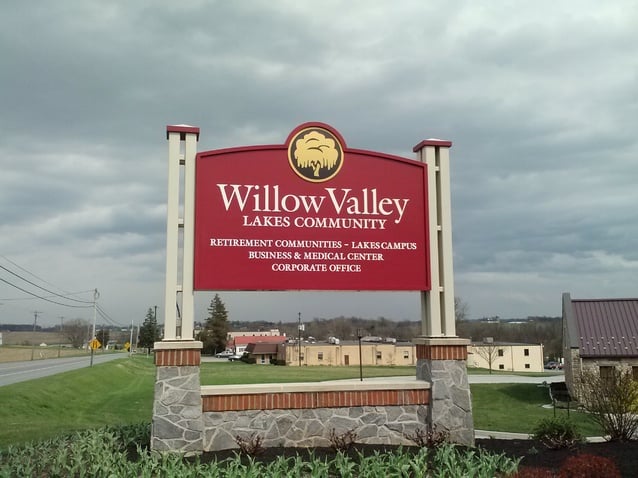 Willow Valley's Lakes Community on Willow Valley Lakes Drive in West Lampeter Township, depicted in this file photo, is located next to the proposed expansion site.

Willow Valley's Lakes Community on Willow Valley Lakes Drive in West Lampeter Township, depicted in this file photo, is located next to the proposed expansion site.

The future has arrived at Willow Valley Communities.

Nineteen years ago, after Willow Valley bought the Christian Herr farm in Willow Street, the senior living provider rolled out an ambitious $90 million plan to develop the whole property.

Then, after neighbors complained, Willow Valley downsized the Peach Bottom Road proposal, opting to develop the northern side of the tract immediately and set aside the southern side for a later time.

“We see (the southern side) being developed in the future. We just haven’t made a decision about it,” a Willow Valley executive said then.

Subject to West Lampeter Township approval, Willow Valley would like to start construction in late spring. Occupancy would begin in summer 2020. Completion would take four or five years.

Willow Valley declined to provide an estimate of the project cost. But an construction industry source estimated the cost at $70 million.

The tract to be developed consists of the final 47 acres of the former Herr farm, an 79-acre parcel acquired by Willow Valley for $1.75 million, according to LNP files.

The acreage is between Peach Bottom Road and Wynwood Drive.

The northern side of the Herr farm was developed in the early 2000s as the Willow Valley Cultural Center, Spring Run Apartments and Meadow Ridge Health Center.

A sketch plan for the new development was presented to the township supervisors for discussion purposes at their Monday meeting.

The supervisors, she said, “seemed satisfied with the answers.”

Part of that feeling is based on Willow Valley’s track record, McGuire indicated. She explained:

“We understand that Willow Valley takes great pride in their developments. They take great pride in how they look and how they’re maintained. ... That is appreciated.

In the coming weeks, Willow Valley will submit a land development plan for the project and request approval of a conditional use — having a medical-residential development on land that’s zoned R-1 residential.

Leader said Willow Valley is popular for many reasons.

These include the appeal of Lancaster city and county, the high quality of Willow Valley and Willow Valley’s unique status as the county’s only exclusively lifecare community.

(That means residents will not be charged extra for personal care, skilled nursing care or memory support that may be needed in the future.)

The new development, as yet unnamed, would add more than 300 residents.

It also would create 45 jobs in the memory care area plus an undetermined number of jobs to serve the independent living apartments and villas.

The memory care area would consist of a main, two-story building with 60 apartments, plus a restaurant, atrium and spaces for amenities. Another 80 residents needing memory care would live in six smaller residential buildings nearby.

Elsewhere on the 47-acre parcel, Willow Valley would build five three-story apartment buildings. Each building would have 24 apartments for independent living plus 36 underground parking spaces.

In addition, Willow Valley would build villas as singles, duplexes and triplexes. Each villa would come with a two-car garage plus a driveway for extra parking.

The new development would be accessible from Willow Valley Lakes Drive and from Violet Avenue, which crosses Peach Bottom Road near Wynwood Drive.

The new development, plus the Cultural Center, Spring Run and Meadow Ridge, do not represent Willow Valley’s original vision for the Herr farm.

Its initial proposal was to develop the entire farm into The Preserve, consisting of up to 545 apartments and villas, a five-hole golf course and a performing arts center.

But when neighbors objected, Willow Valley opted to develop just the northern side of the farm — constructing fewer apartments in shorter buildings there than initially proposed — and scrapping the golf course.

Willow Valley Communities is about to break ground on its last undeveloped ground in West Lampeter Township, and the most ambitious part of it…