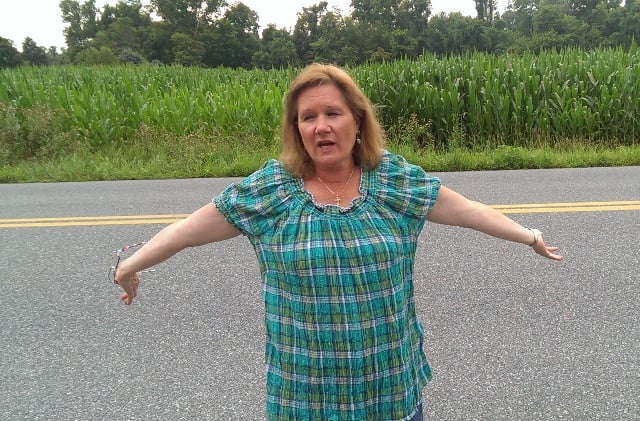 Holly Dankers, a resident of the Bridge Valley development in West Hempfield Township, expresses her frustration about a proposed natural gas pipeline that would run through the cornfield behind her - about 300 feet from her front door. 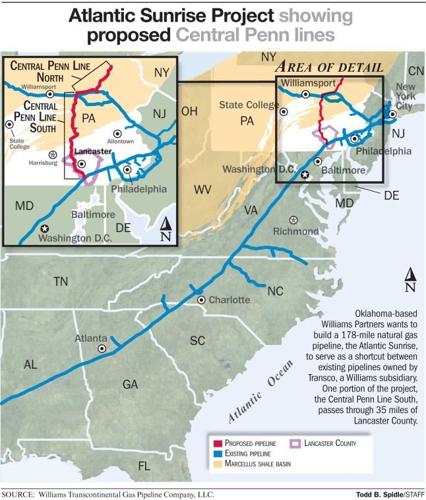 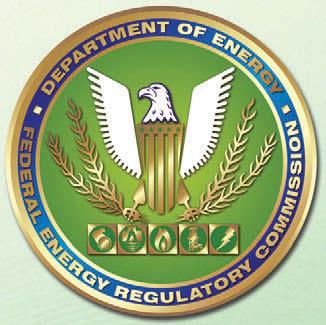 Holly Dankers, a resident of the Bridge Valley development in West Hempfield Township, expresses her frustration about a proposed natural gas pipeline that would run through the cornfield behind her - about 300 feet from her front door.

It was early July when Mike Lausch got the letter that shook his West Hempfield Township neighborhood.

The letter, from Oklahoma-based Williams Partners, announced that the firm had rerouted its proposed natural gas pipeline. Now it would run through a cornfield paralleling the 196-home Bridge Valley development — and directly across the street from Lausch’s house.

Residents were stunned — and angry. Lausch contacted every elected official he could think of to protest. Others began organizing via social media. Many wrote impassioned letters to the federal agency that, as they see it, holds the fate of their modest neighborhood in its bureaucratic hands.

Lausch, in his letter, pleaded with federal officials: “I beg you to not allow this pipeline to run so dangerously close to my home.’’ Blunter were neighbors James and Holly Dankers: “We vehemently protest this pipeline being placed so closely to our home. ... Please consider placing the pipeline in a safer/desolated location!”

FERC has gotten more than 880 such letters, many calling on the agency to reject the plan out of hand.

But experts familiar with the FERC process say some comments are more equal than others.

Emotional appeals about explosions or falling property values will fall on deaf federal ears, said Carolyn Elefant, a former FERC attorney who now represents citizens groups. But FERC often will respond to specific concerns about vulnerable natural areas or wildlife that might be harmed by a specific pipeline route.

In other words, citizens can impact a pipeline’s route. But stopping it altogether? Good luck.

“It’s a very unfortunate and sad thing,” she said. “If a congressman gets 1,000 letters, he’ll listen because these are voters. ... But the more form letters (FERC) gets saying, ‘I don’t like it,’ those letters make very little difference. FERC could care less.”

Founded in the 1930s, FERC regulates the interstate transmission of natural gas, oil and electricity, reviews proposals to build liquefied natural gas (LNG) terminals, like one at nearby Cove Point, Maryland, and licenses hydropower projects.

The Energy Policy Act of 2005 expanded FERC’s authority, naming it the lead agency coordinating all federal authorizations a pipeline might need — think clean air or other environmental permits.

“Part of FERC’s job is to get energy infrastructure built,” said Pamela Anderson, a partner in the Environment, Energy & Resources practice for Perkins Coie in Washington state. “We need infrastructure, and that’s what the act was trying to achieve.”

Some critics, who note that FERC is self-funded (it’s funding comes from fines and fees paid by the energy industry), say the agency basically acts as a rubber stamp. FERC officials note the agency has, in fact, rejected major infrastructure proposals. But not many.

Since 2011, the agency has denied two pipeline-related proposals:

*El Paso Natural Gas Co. in Texas asked FERC to authorize the temporary deactivation of 21 compressor units at nine compressor facilities in New Mexico and Arizona that were underutilized. In April 2011, FERC denied the request, saying the company hadn’t provided sufficient evidence that the move was warranted.

*Also in 2011, FERC denied a request by Turtle Bayou Gas Storage Co., which wanted to build gas storage and associated pipelines in Chambers and Liberty counties inTexas. The agency again ruled that the project was “not required by the public convenience and necessity.”

FERC officials also said that of 709 completed pipeline applications since 2006, 451 (64 percent) have been approved, 258 (36 percent) were denied, while another 94 are pending. Officials acknowledged, however, that most “denials” were applications that had been withdrawn, rather than outright rejections.

In 2012, environmental groups went to court to try to overturn FERC’s approval of a proposed New Jersey-New York City pipeline; the city of Jersey City, New Jersey, filed a separate challenge in the case, claiming that because FERC is funded by the industries it oversees, the agency is beholden to the pipelines that apply to it for certification and can’t constitutionally regulate the industry.

A U.S. Court of Appeals called that claim “creative”:

“Presumably under most regulatory schemes, by the time applicants and their expert counsel have worked through changes, adaptations, and amendments, they are not likely to pursue many certificates that are hopeless. The fact that they generally succeed in choosing to expend their resources on applications that serve their own financial interests does not mean that an agency which recognizes merit in such applications is biased.”

Time to speak up

FERC’s Young-Allen stressed that this doesn’t mean that protests are pointless. If the pipeline is to be built in the most sensitive manner possible, she said, citizens must speak up. And now’s the time to do it.

Late last week, FERC announced that it will prepare an environmental impact statement on the project to determine whether it should proceed; FERC said it would hold a “public scoping” meeting on Monday, Aug. 4, from 7 to 10 p.m. in the Student Memorial Center at Millersville University, 21 S. George St., Millersville.

Williams Partners is in FERC’s “pre-filing” process. That means the company has not yet submitted a formal application to the commission. That is expected to happen next year.

Pre-filing isn’t required; Williams could have submitted its application without first seeking public input. But most firms choose to pre-file because it streamlines the process.

“We voluntarily enter the pre-filing process because we recognize it has tremendous value in helping us identify potential issues associated with siting new pipeline infrastructure,” said Williams spokesman Christopher Stockton. “At the end of the day, our goal is to file an application that reflects the best possible route by minimizing environmental impacts. The pre-filing process is critical in helping us accomplish that objective.”

Already, he noted, Williams has rerouted the pipeline in response to public concerns.

“To date, we’ve incorporated changes to about 20 percent to the pipeline route (and) we expect that process will continue through the time we file our FERC application,” Stockton said.

To get their voices heard, citizens may want to consider pooling resources, said attorney Elefant, who has written a guide titled “Knowing and Protecting Your Rights When an Interstate Gas Pipeline Comes to Your Community.”

“Comments get taken more seriously if groups are able to hire experts,” she said. “If you hire a (pipeline) safety expert or a biologist to track endangered species or habitat, FERC is going to be forced to respond to something like that.”

Added attorney Barbara Jost, of the Washington, D.C., firm Davis Wright Tremaine LLP, who has more than 30 years of experience dealing with natural gas issues: “You’ve got to be very clear to the extent you can give a solution to your problem; you say, here’s my concern, and here are possible ways to solve that concern.

“FERC doesn’t want 4,000 interventions by the citizens of X county opposing the project,” Jost said. “That’s not a good use of anybody’s time.”

Jost said she has been involved in infrastructure proposals that are abandoned in the face of environmental and political concerns, including a proposed liquid natural gas facility on Staten Island. “Ultimately, there was so much political opposition to it that the applicant utility pulled the plug and said, ‘We’re not going to go ahead with it.’ That was after years of battling over it.”

Some local pipeline foes have begun pressuring local officials to adopt a “community bill of rights” — ordinances stipulating that residents have the right of self-determination and that activities such as pipelines would violate those rights.

A representative from the Mechanicsburg-based Community Environmental Legal Defense Fund held a meeting on this type of “rights-based organizing” earlier this month in Conestoga, drawing a crowd of about 170.

Luke Bunting of Conestoga was there.

“FERC can be useful as a hurdle, certainly not as a barrier or gatekeeper,” he said in an interview last week. “Communities should have a right to say ‘no’ to something like this. But if we follow the law, we’re not going to win.

“And it’s designed that way.”