The Lancaster County commissioners clashed sharply on Wednesday over a Republican-led plan to reopen businesses as early as this week in defiance of Gov. Tom Wolf as citizens questioned the legality of the move and accused the board of jeopardizing public health.

“Why are you rushing to reopen the county — risking thousands of our lives — before your own plan is ready for implementation?” a commenter who identified themself as Lee Scaralia and a resident of Lancaster city, asked of the Republicans.

The Republican commissioners, Josh Parsons and Ray D’Agostino, did not directly respond to their question or others seeking details about the legal and health ramifications of reopening ahead of schedule.

The two board members are among 13 Republican elected officials in Lancaster County who signed a May 9 letter to Wolf stating they intend to gradually begin allowing businesses to reopen here on Friday even as the county remains under the governor’s strictest stay-at-home orders.

Their plan has drawn support from many local Republican elected officials in the county, though not all. At least three municipalities led by GOP-majority boards are resisting the move. And Democrats have assailed the move as irresponsible.

County Commissioner Craig Lehman, the lone Democrat on the three-member board, called the plan to begin reopening on Friday illegal and accused his Republican colleagues of rushing to approve a plan to spend tens of millions of dollars in federal aid on COVID-19 testing, contact tracing and helping small businesses recover.

He also took issue with the agenda for the board’s Wednesday morning meeting, which was held via videoconference, which was completed only Tuesday evening.

"That’s why you had to try to get everything you could possibly get on the agenda today - so later in the week you can cloud the public issue and pretend like Lancaster County is really prepared to reopen, when we’re not,” Lehman said.

Lehman argued the county will not be ready to begin reopening on Friday because widespread testing and contact tracing are will not be in place by then.

“You have failed as far as transparency is concerned,” he continued, “and you know that it is about the political narrative that you are going to try and knit together this week to justify your illegal action from this weekend.”

Parsons said he was disappointed with Lehman’s accusations and said the board members have always tried to collaborate. He denied the timing of the meeting agenda was political in nature.

“To call that political I think is unfortunate,” Parsons said. “If you think you need more time to (consider the proposals), okay, we can have that discussion.”

D’Agostino said the plan to spend $95 million in federal aid is a framework for allocating money to reopen the economy, ensure public safety and maintain government operations.

“This is a statement to the community on what is important to get through this and how those monies should be allocated,” he said.

The board agreed to hold budget hearings on the money.

But it approved memoranda of understanding with Penn Medicine Lancaster General Health that will allow the health care institution to do contact tracing on 50 new cases of COVID-19 and test 1,000 people each day for a year, and with the Lancaster Chamber and the Economic Development Company of Lancaster County to gradually make strides toward full operation while adjusting to a “new normal.”

Prior to the meeting, the Lancaster County Democratic Committee put out a call to its supporters to join the meeting and comment.

Nearly 700 viewers submitted about 2,500 comments or questions to the commissioners over the course of the four-and-a-half-hour meeting.

Chief Clerk Larry George said he tried to sort through them and choose general themes from to ask the commissioners, but many viewers expressed frustration that they were not being heard and at one point some even texted Lehman to have their question to Dr. Michael Ripchinski, Lancaster General Health's chief clinical officer, heard.

Ripchinski wouldn't answer, however, as to whether he thought the county was ready to move to yellow. 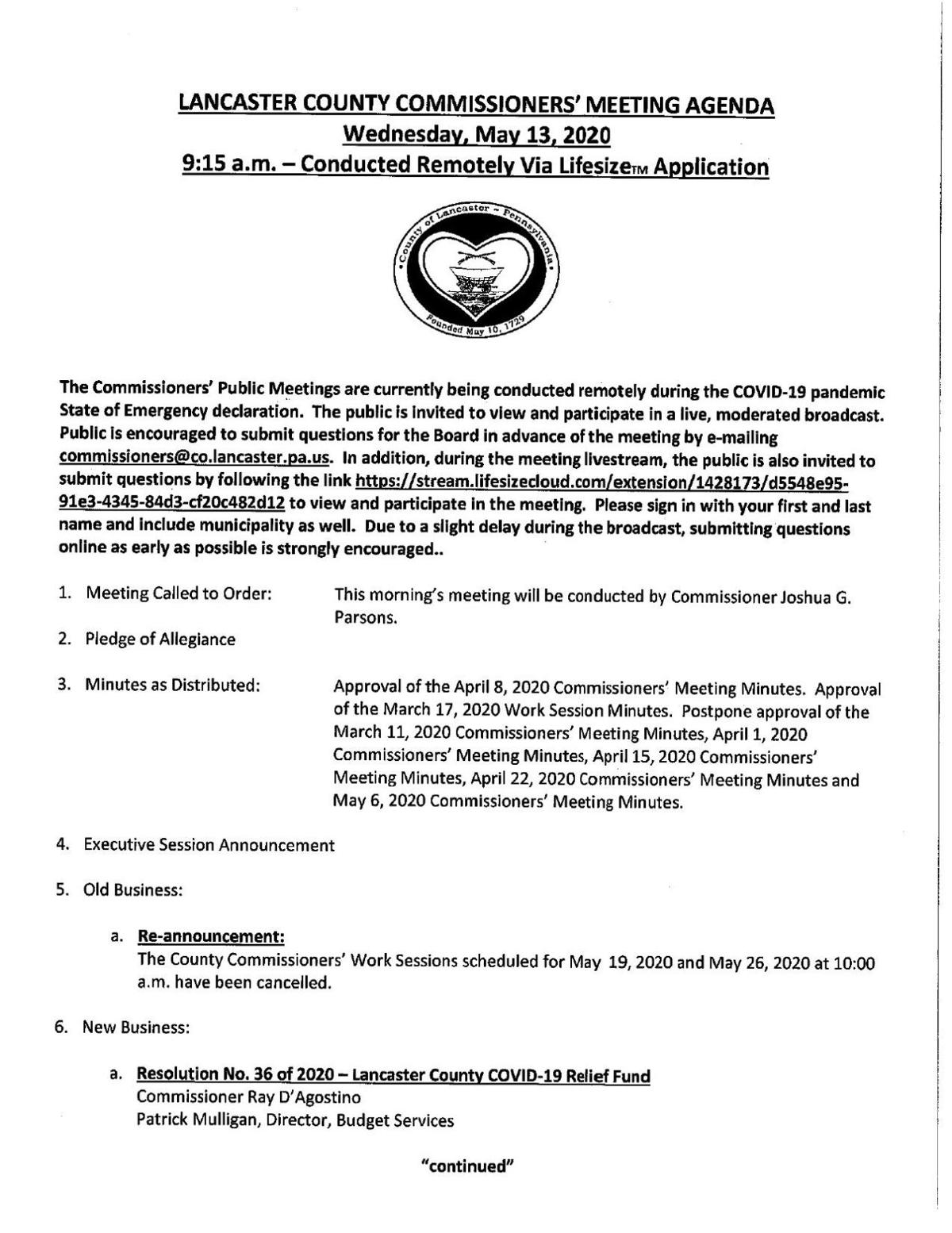 A 40-year-old Columbia man is dead after a vehicle hit him as he walked on Route 30 on Tuesday night, according to York County Coroner Pam Gay.

With 30 new coronavirus cases on Wednesday, Lancaster County edged no closer to meeting a key state metric that local officials have decided t…

Pennsylvania has gotten even closer to allowing bars and restaurants throughout the state to sell cocktails to-go.

Nearly four weeks after its first protest calling on Gov. Tom Wolf to reopen the state and dismiss the stay-at-home order, ReOpen PA will hold…

Lancaster County commissioners hosted their weekly press conference on the state of COVID-19 in the county.

Another 1,800 Lancaster County residents fell into unemployment last week, as the COVID-19 pandemic continued to create havoc in the local eco…

Local clergy are calling out Lancaster County officials who on Friday moved the county into the “yellow” phase of Gov. Tom Wolf’s plan to reop…

'Necessary to act on the will of the people': county GOP officials answer LNP Editorial Board questions on reopening [column]

Editor's note: What follows is the unabridged response from Republican state and county elected officials to questions posed by the LNP | Lanc…

With 12 more Pennsylvania counties receiving Gov. Tom Wolf’s approval Friday to begin reopening their economies next week, only 18 of the stat…