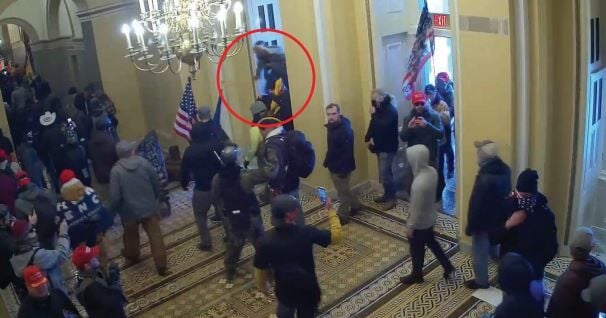 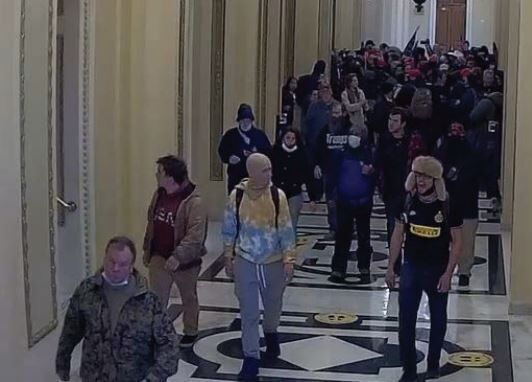 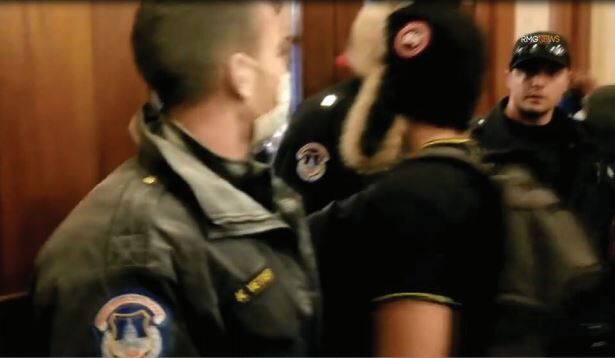 Zachary Jordan Alam had been on the run for weeks when he checked into the Penn Amish Motel in Lancaster County on Jan. 26.

Wanted by the feds for his role in the Jan. 6 Capitol insurrection, the 29-year-old man who officials believe had recently been living in the Washington, D.C., area couldn't catch a break.

His picture was everywhere.

He'd become known on Facebook and Twitter as "Helmet Boy" because he'd been caught on camera using a helmet to smash the window of the Speaker's Lobby.

And — though he didn't know it yet —someone in his family had tipped off the FBI to his identity.

Alam seemingly had nowhere to hide.

He flashed a Virginia driver's license to the front-desk clerk in rural northeast Lancaster County last Tuesday and paid for a room with cash, a clerk told ABC27. Alam likely spent the rest of the week holed up at the Penn Amish, a low-slung strip of about a dozen rooms just off the Pennsylvania Turnpike and hidden down a short driveway from the traffic of Route 272 near Adamstown.

He'd told his family he didn't want to go back to jail. But the feds had already begun closing in.

Investigators showed up in the Adamstown area, known as “Antiques Capital, USA,” early Saturday morning and started showing store clerks in the area pictures of Alam, townspeople said. Authorities entered a Turkey Hill across the street from the Penn Amish with a picture of Alam sometime before 6 a.m., asking if anyone there had seen him, according to Sherry Bailey, a Turkey Hill employee.

Alam was arrested at the motel later that day, the FBI confirmed on Tuesday.

While Alam's capture might solve a nearly month-old national mystery —who was "Helmet Boy" and where is he? — it's not clear why or how Alam chose Lancaster County in which to hide.

Does he have family here?

Did a Lancaster County resident and supporter of Donald Trump's efforts to overturn the election offer to provide cover for Alam?

Or was he just passing through on the Turnpike, hoping to evade the feds for one more week? 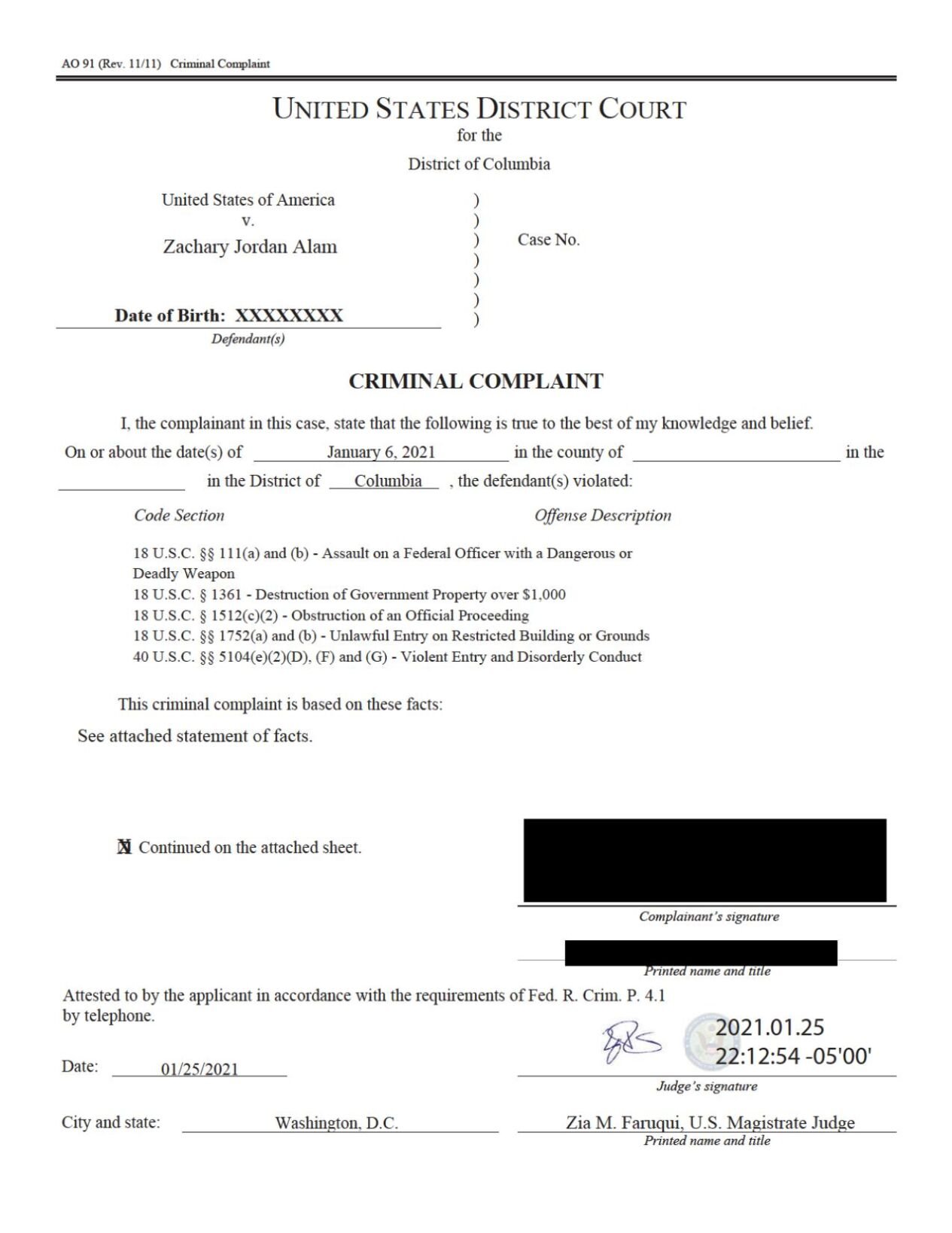 Lancaster County District Attorney Heather Adams said in an email Tuesday that her office was not involved with Alam's arrest. She also had no other information about him.

This wasn’t Alam’s first time running from the law.

The family member that tipped the FBI off about Alam told authorities that Alam had said he was sorry for what he had done at the U.S. Capitol, but he was not going to turn himself in because he didn’t want to go to jail again, agents wrote in the affidavit.

His last jail sentence was in 2019, when he was ordered to serve six consecutive weekends in jail in connection with unauthorized use of a vehicle charges, according to court documents. From May 24 to June 19, 2019, Alam had to report to jail at 6 p.m. on Friday and stay until Sunday. He served 18 days in total.

Court documents also show that Alam had been charged at least a half dozen times since 2016.

In one case, where he was charged with unauthorized use of a vehicle, Alam failed to appear to four court hearings, causing authorities to issue a bench warrant and release him to a halfway house, according to court documents.

The Jan. 6 insurrection put Alam in the crosshairs of federal investigators.

An apparently agitated Alam was seen on surveillance footage entering the Capitol shortly after pro-Trump rioters first breached the building, wearing a black and tan fur-lined hat and a backpack, according to a criminal complaint. Once inside, he and a "large, aggressive crowd" forced their way past Capitol Police and attempted to break down a guarded door that led to a hallway that connects to the House of Representatives chambers.

"Break it down!" and "let's (expletive) go!" the crowd shouted as Alam began pushing his body against one of the officers guarding the door, according to the criminal complaint.

Alam was seen punching and kicking the glass panels to the door before shattering the window with a helmet, the FBI said.

Not long after, Ashli Babbitt, 35, was shot by police while attempting to climb through the same broken window, according to the criminal complaint.

Everyone charged in connection to the Jan. 6 insurrection will be processed through the U.S. Attorney’s office in Washington, D.C., though Alam might have his initial court appearance at the U.S. Court House in Philadelphia, according to Jennifer Crandall, the public information officer with the U.S. Attorney’s Office, Eastern District of Pennsylvania.

It was not immediately clear when Alam will appear in court.

A woman with Lancaster County ties and her husband are accused of systematically abusing and torturing their five children in Lebanon County, …

An Ephrata man was shot and killed Friday morning in a Berks County hookah lounge, according to Cumru Township police.

A three-story apartment building near downtown Lancaster was evacuated Sunday morning after the structure caught fire, according to a supervis…

Editor's note: This article has been updated with information from Pennsylvania State Police.

A Warwick Township woman was charged Tuesday after more than 100 cats were removed from her home in poor health, according to the Pennsylvania…

Federal prosecutors say a Manheim Township man who stormed the U.S. Capitol on Jan. 6 repeatedly punched a police officer in the head and ripp…

An Elizabethtown man sexually assaulted an underage girl and then began stalking her and entering her house while uninvited, according to the …

Man arrested by FBI in January in connection to Capitol insurrection stole $5,000 in antiques: police

A Virginia man who took part in the Jan. 6 insurrection at the U.S. Capitol and was later arrested at an East Cocalico Township motel stole mo…