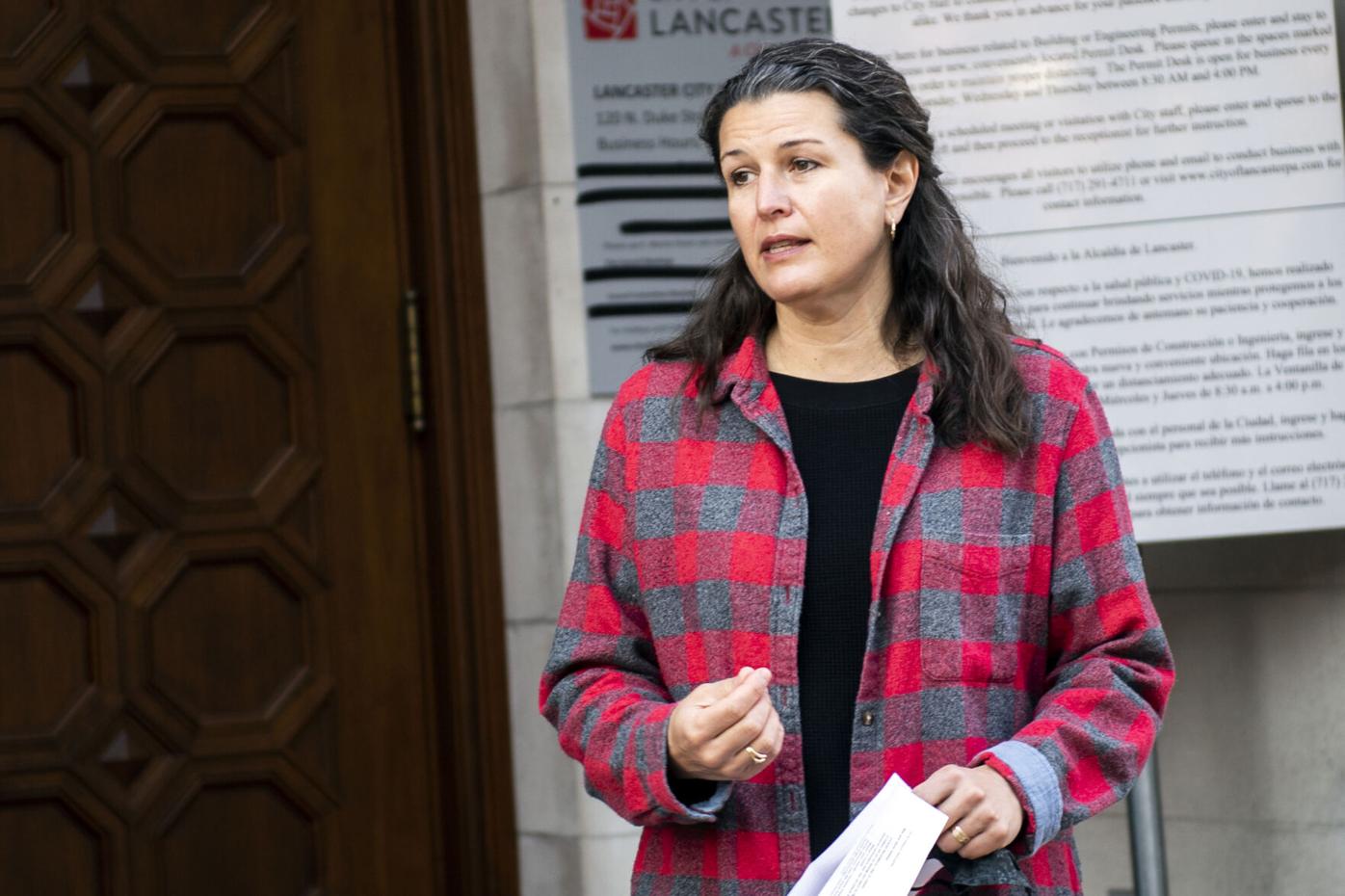 Lancaster city mayor Danene Sorace, left, speaks to volunteers before Canvassing around the city to spread awareness of the spiking COVID-19 cases in the county, Saturday, Nov. 14, 2020. More than 45 people volunteered to canvass around the city. 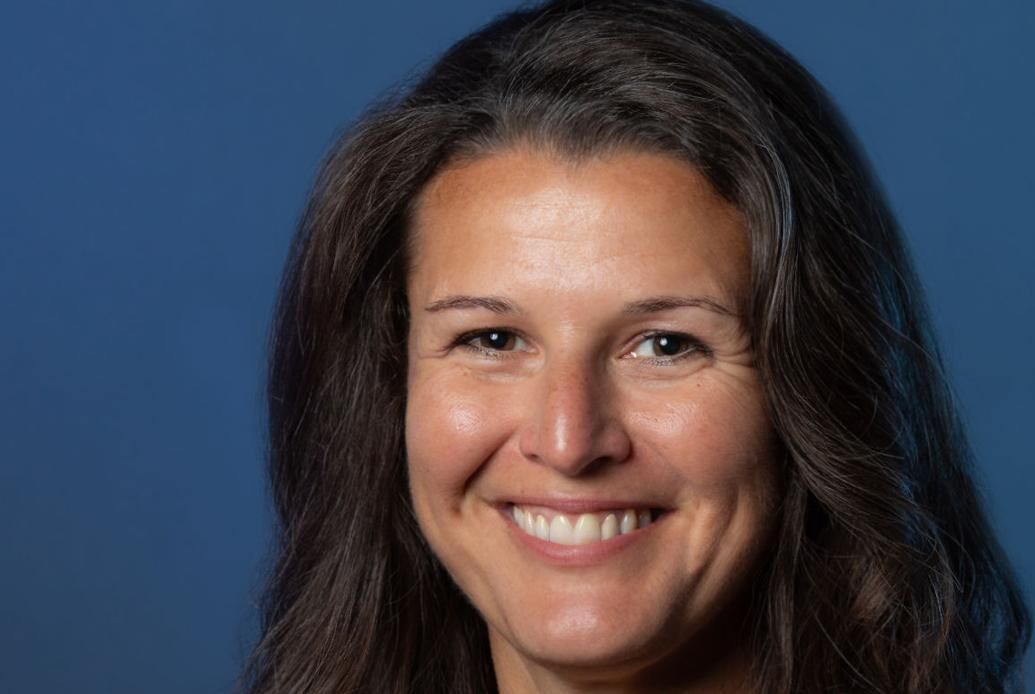 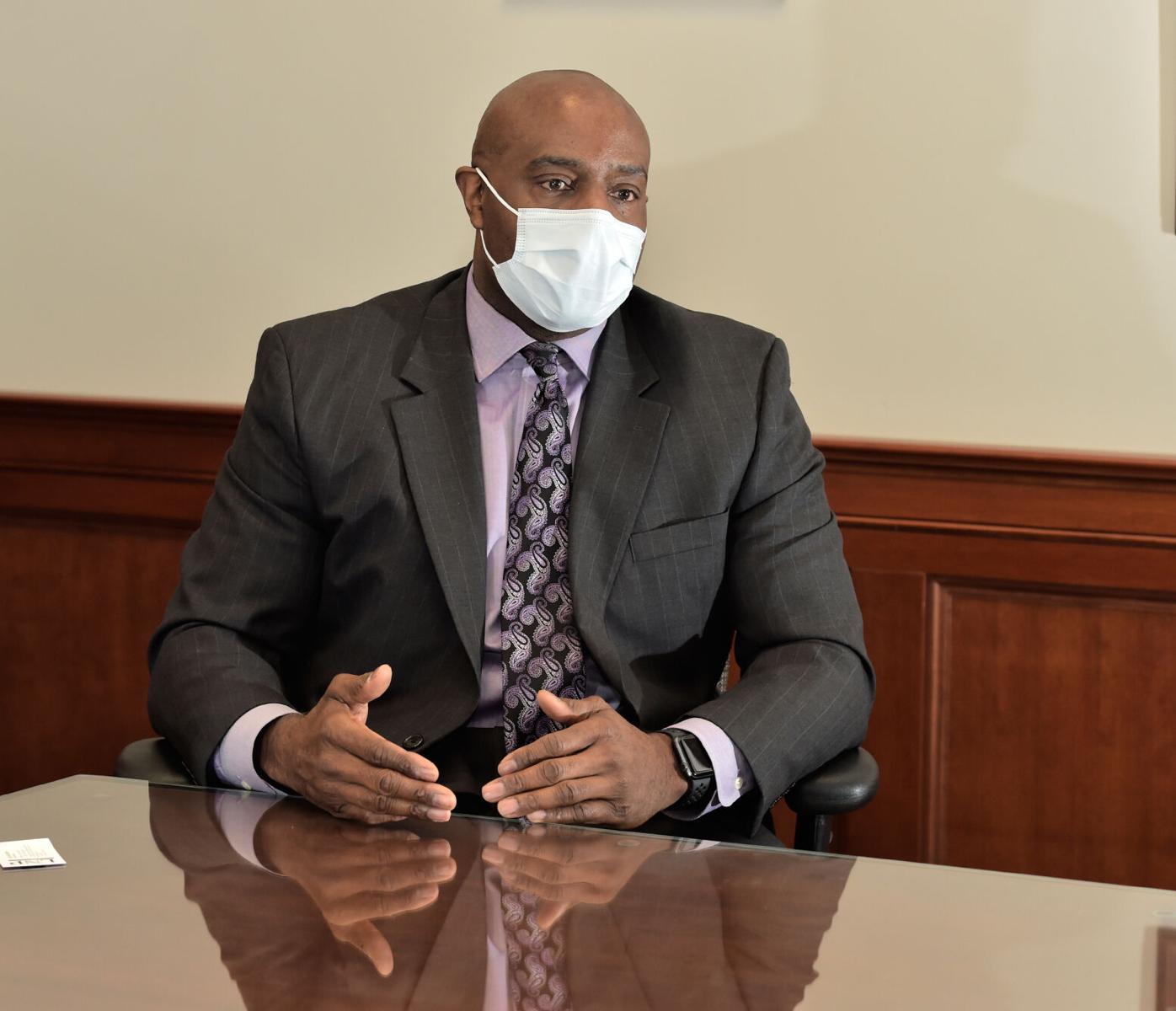 Interim Chief John Bey, is pictured in a fourth floor conference room of the Lancaster City Bureau of Police where he is interview by a member of the news media about his new postion on Monday, December 14, 2020.

Lancaster city mayor Danene Sorace, left, speaks to volunteers before Canvassing around the city to spread awareness of the spiking COVID-19 cases in the county, Saturday, Nov. 14, 2020. More than 45 people volunteered to canvass around the city.

Interim Chief John Bey, is pictured in a fourth floor conference room of the Lancaster City Bureau of Police where he is interview by a member of the news media about his new postion on Monday, December 14, 2020.

A year ago following the death of George Floyd and the social unrest that broke out across the country, Lancaster Mayor Danene Sorace committed to making changes in the police department to improve racial equity, diversity and inclusion.

But when she made those commitments, she had no way of knowing she’d soon be searching for a new police chief. Jarrad Berkihiser, who was with the department for 26 years until October, was pushed to retire after Sorace said she began to doubt that he shared her vision for the direction of the police department.

In an interview Thursday, Sorace, who is running this year for a second term, discussed where the city stands on implementing her commitments and where the search for a permanent chief stands.

“When you look at the number of initiatives that have been undertaken since December, I think you can see that the pace is different than previously. And I give a lot of credit to (interim Chief John) Bey and the command staff because they are all working to support these initiatives,” Sorace said.

The city hired CNA Corporation, of Arlington, Virginia, at $81,022 to review police department policies and make recommendations to bring the department in line with best law enforcement practices.

The review will also help the 135-officer department as it seeks accreditation from the Pennsylvania Chiefs of Police Association. Accreditation would also make the city eligible for federal funding, Sorace said.

Accreditation can take a year to three years and the city is hoping it can be accredited in a year, Lt. Kevin Fry said.

On Monday, the police department will renew bike patrols — something it once had but cut years ago because of funding and manpower issues. Nine officers have gone through training.

It’s “something the community has asked for for a long time,” Sorace said.

All uniformed officers will also undergo crisis intervention training offered by the county’s Adult Probation and Parole Services. Previously, the 40-hour training was encouraged, but not mandatory.

“Our street sergeants are the first line of supervision for our officers. They set the tone for our patrol officers who are working on the street and it’s really important that they lead by example and many of them do and we want to strengthen the leadership among our sergeants,” she said.

Bey, the interim chief tapped by Sorace in November, wants to have people outside the department involved in the interview process for police officer candidates.

Details aren’t fully worked out yet, but the initiative is expected to begin as soon as this fall after applicants for the hiring advisory group are selected.

The city is also having its civilian complaint and internal discipline processes evaluated, Sorace said. The city has begun releasing information on discipline and use-of-force data, and it posted the police use-of-force policy online.

“I do think that will be something we continue to do. It’s been in this period of transition and now with this review (by CNA,) there will be a process for how that data is collected and shared with the public,” Sorace said.

As for other commitments made last June, some of those, such as department-wide implementation of body cameras, were already in place. A second social worker has also been hired. The social workers help officers assess the mental health and social service needs of people they come across and connect residents with appropriate services.

Some of the protesters who were demanding changes in the police department last summer have gone quiet, Sorace said she’s not surprised.

“It’s hard to sustain that level of energy over a long period of time. I think we can recognize that a lot of work has been done and there’s a lot more work that continues and needs to happen,” she said. “The things that have been done are a reflection of a lot of conversations within the community and within the department about the kind of community we are co-creating, the safety that we are creating through trust and legitimacy. And those are essential for public safety.”

While police have been the focus of racial equity concerns, Sorace said the issues span the entire city government.

And the concerns go beyond racial equity, she said, to include a “broader conversation about diversity, equity and inclusion and making sure that when people come to work for the City of Lancaster, that they feel valued for their work and their contribution and that they feel that they can express themselves, that there a mutual respect in the workplace,” she said. “At the most basic level, if you don't respect or feel respected in your workplace, then how do you function in serving the public?”

Lancaster’s interim police chief would like to shorten that title.

Lancaster Mayor Danene Sorace said earlier this year that she hoped to have a new police chief hired by either May or June.

Last week, she told LNP|LancasterOnline that she’s cautiously optimistic that can still happen by the month’s end. The biggest hurdle, she said, has been scheduling everyone involved in the interview process.

A panel of a dozen community members is reviewing applicants referred by the search firm hired by the city. The community panel includes two city council members and representatives from the NAACP, the police union, the county district attorney’s office, a J.P. McCaskey High School student and a city business owner.

Sorace — intentionally, she said —  is not taking part in this step, preferring to let the panel recommend a handful of candidates to her.

There are several applicants currently in the running for the job, including John Bey, who has been interim chief since December and has made it clear he wants the job.

Sorace said she is pleased with Bey’s performance since he took the interim job in November.

“He has done a remarkable job. I think that he and I — as he wrote about in his op ed (published in the May 30 issue of LNP) — are very aligned with the direction the department is going in,” she said.

And what if Bey doesn’t make the cut?

“It was important that the interview panel review candidates independent of me, and ultimately, their charge is to present to me two or three candidates for final consideration,” she said.

Then, she will conduct a new round of interviews with the finalists alongside her executive leadership team and police command staff.

The community panel will be conducting interviews on Monday and Tuesday, she said, and will make recommendations to her on June 14. Additional interview time is scheduled for June 17 and 18 for executive team interviews.

One person was injured after the car they were driving collided with a train in Upper Leacock Township Monday afternoon, according to East Lam…

If approved, and if Mayor Danene Sorace is successful in her bid for reelection, she will be paid a total of $57,337 more for her second four-year term as mayor than her predecessor Rick Gray was paid for his third and final four-year term.

Editor's note: This article has been updated to include comment from Kreider's attorney, Patrick G. Geckle.

Engagement and building trust with the community are the top priorities for Lancaster city’s new chief of police.

John Bey, who led Lancaster’s police department on an interim basis for seven months before he was tapped in June as full-time chief, was form…

The community needed a good turnout Tuesday for National Night Out after the past year, according to Stephanie Guzman, and it got it.