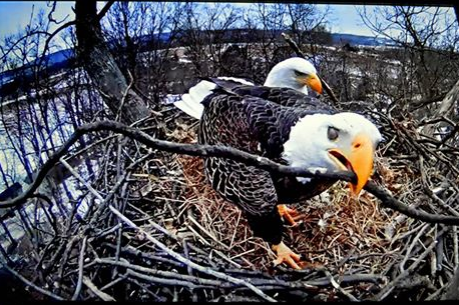 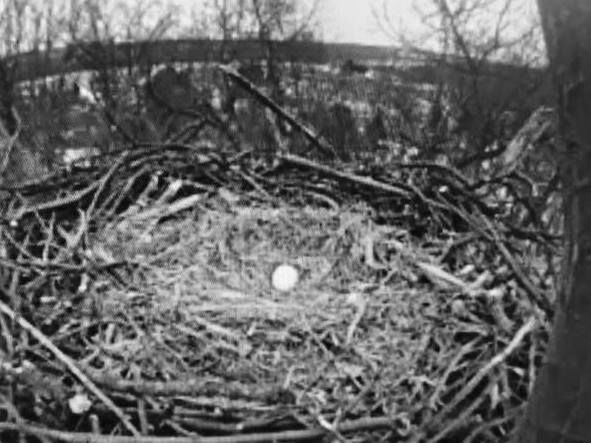 The eagle egg left unattended in the Eagle Cam nest in York County Monday at 12:37 p.m., around the time WGAL was filming a story near the nest.

The eagle egg left unattended in the Eagle Cam nest in York County Monday at 12:37 p.m., around the time WGAL was filming a story near the nest.

Game Commission officials are trying to find out whether a WGAL television cameraman scared one of the popular Eagle Cam eagles from its nest while it was incubating a freshly laid egg this week.

WGAL says its crew did not disturb the eagle, but word of the incident has spread rapidly across social media and infuriated birdwatchers, who have launched a letter-writing campaign against the Lancaster-based station.

Harassing eagles is both a state and federal violation, punishable by fines and/or jail time.

"We’re aware that they were down there,” Game Commission spokesman Travis Lau said of the WGAL crew.  “The eagle might have flushed during that time. We’re looking into it.”

The nest of the two eagles, located in York County, has a live-streaming camera mounted only feet away and the eagles just welcomed their second egg on Tuesday.

The birds, named Liberty and Freedom by LNP readers, are an online sensation. So far this month, more than 1 million people have tuned in from all over the world.

WGAL news director Dan O’Donnell on Wednesday emphatically denied that the crew that filmed a segment on-site about the nest had done anything wrong.

“Our photographer was not under the tree” where the nest is, O’Donnell said.

O’Donnell said he had spoken with the veteran cameraman, Scott Wilson, the reporter, Matt Barcaro, and watched the raw footage taken at the nest site.

“I talked with both of them and reviewed the raw video and we’re not under the tree,” ODonnell said.

He said the camerman never got closer than the reporter and birdwatcher being interviewed, a distance he estimated at “several hundred yards.”

He said the crew was there for only about 20 minutes.

But Karen Lippy, a Hanover birdwatcher who escorted WGAL’s Barcaro and Wilson to the vicinity of the nest near Codorus State Park, maintained in an interview that the cameraman “was right under the tree. The eagle came off the nest, flew around twice and went back.

“I felt terrible about it when I realized what had happened,” she said. “I don’t blame the camera crew, I blame myself. It was stupidity on my part. I should have kept my eye on him (the cameraman), but I didn’t.”

Lippy, 66, who was being interviewed at the scene for a behind-the-scenes Eagle Cam story that aired that evening, told LNP the cameraman had asked to get closer than where they were standing near the driveway of a nearby home, which she estimated at about 60 to 80 feet from the nest.

The former York Audubon Society president said she agreed  but thought he meant 5 or 6 feet and went back to the interview. But when she looked up next, she said “he wound up walking right under the nest.”

Lippy, who has monitored the nest since 2004 for the Game Commission, said she called the agency and reported the disturbance as soon as she got home.

She said she took WGAL to the vicinity of the nest after getting permission from the farmer who owns the property where the nest is located.

Lau emphasized that there has been no determination of wrongdoing and that “there have been many different accounts.”

If it is found there was inappropriate disturbance, there could be a disturbance of game or wildlife charge under the state wildlife code, according to Lau. That carries a maximum fine of $1,000 and the possibility of up to three years in jail.

A federal violation also could come under the Bald and Golden Eagle Protection Act, which makes it unlawful to “molest or disturb” eagles. That carries a civil penalty up to a $5,000 fine.

The Game Commission did not place do-not-enter signs around the Hanover nest because they have found that such signs attract trespassers, officials said.

Fans of the Eagle Cam have flailed WGAL on social media and say the disturbance was particularly dangerous because it left an egg unattended in  an outside temperature of 11 degrees.

However, Lippy observed that the egg was left exposed to the elements earlier Monday morning for about 10 minutes and twice again Monday afternoon, each time for about 15 minutes.

Patti Barber, the Game Commission’s endangered bird biologist, was not aware of the WGAL incident. But she said, “Any disturbance to eagle nests is illegal and it puts these eggs at risk. We’ve had birds in other places desert territories because of disturbance.”

WGAL’s Eagle Cam story was one of the lead stories on its  evening news broadcast on Monday. At 11 p.m., the story did not include any live footage from the Hanover nest, instead relying on Eagle Cam footage.

The story was not on the station’s website Tuesday. O’Donnell said “we did not consciously take it off. It may have recycled off.”