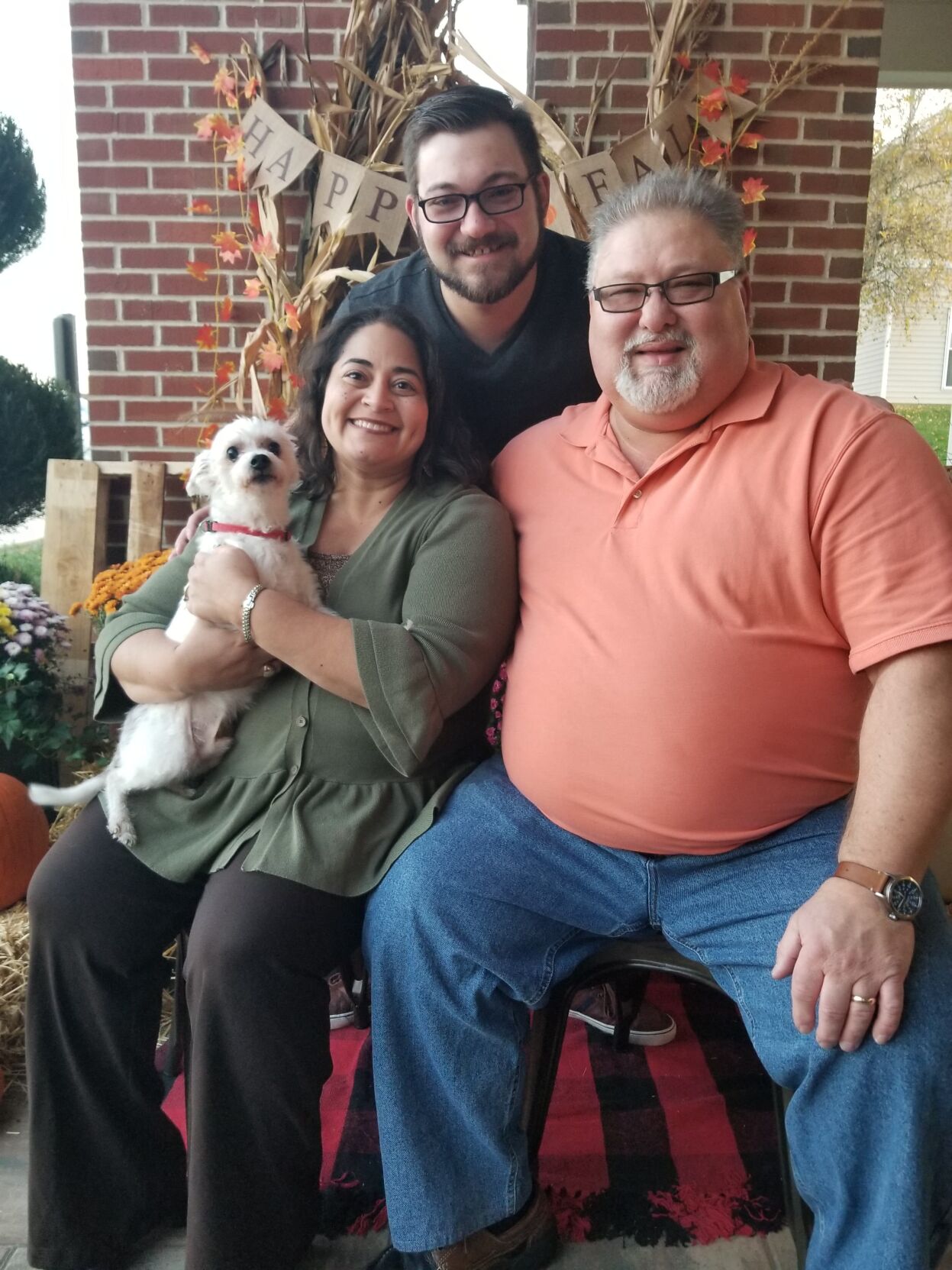 From left, Alexandra Chitwood, Jordan Chitwood and Kenneth Chitwood pose with their dog, Patches, inside their East Lampeter Township apartment complex in fall 2020. Alexandrea Chitwood died of COVID-19 on Nov. 4. 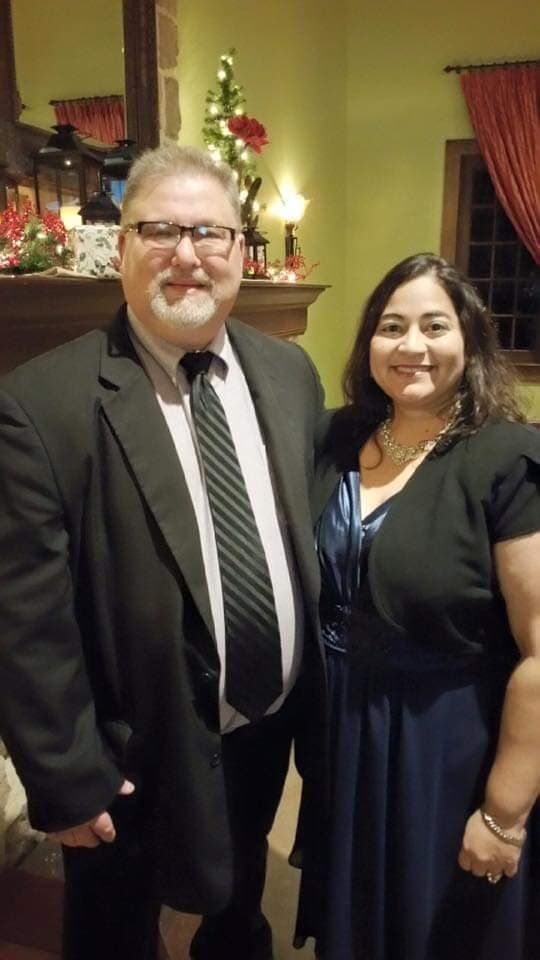 Kenneth Chitwood, left, and Alexandra Chitwood, attend a dinner in 2019.

Alexandra Chitwood had plenty of life ahead of her.

She and her husband, Kenneth Chitwood, just bought their first house together in Mount Joy. They expected to move in by Christmas. Next year, the couple was supposed to celebrate their 10-year anniversary by going on a cruise to Alaska.

She was in her 19th year as a counselor with Manheim Township School District. Her students, and her husband’s two grandchildren, were some of the greatest joys of her life.

But on Wednesday night, Alexandra Chitwood died of acute respiratory failure related to COVID-19. She was 47.

She was regarded as a fierce advocate for students of all backgrounds and someone who could flip the mood of a room right-side up instantly with her bubbly personality and kind, gentle spirit, according to family, educators, parents and former students who spoke with LNP | LancasterOnline Friday.

“We lost an angel way too soon,” Kenneth Chitwood said.

A love story fit for the movies

The Chitwoods met on a trip to Europe through the national student ambassador program in the summer of 2009. Kenneth Chitwood lived in Panama City, Florida, at the time. A day into the trip, the two bumped into each other at a restaurant in Rome. They clicked. After three weeks of traveling Italy and Greece together, they both knew they had something special.

Being more than 1,000 miles away didn’t matter when they returned home. They called and texted each other regularly. Kenneth Chitwood even made a few trips from Florida to visit before they eventually moved together into an East Lampeter Township apartment.

“I knew from the very beginning that she was the best thing to ever happen to me,” Kenneth Chitwood, 57, said. “Definitely a walking angel.”

The couple loved cooking and traveling together and spending time with family. They traveled to the Grand Canyon and Las Vegas, and took a cruise around Canada and Nova Scotia. They liked it so much that they booked another cruise for their 10th anniversary celebration.

Alexandra Chitwood went scrapbooking in Quarryville in mid-October. Despite wearing a mask, gloves, keeping hand sanitizer with her and avoiding close contact with others, she picked up COVID-19 from another person on the trip who later tested positive.

Both she and her husband tested positive in late October. While Kenneth Chitwood has been asymptomatic, his wife, a healthy person otherwise, had a nagging cough, shortness of breath and lightheadedness. Things took a sudden turn on Wednesday night.

“It hit within hours,” Kenneth Chitwood said. “She was doing fine one minute, and then she was gone.”

His wife’s kindness and caring personality is what Kenneth Chitwood said he’d miss the most. Those qualities arguably shined the most when she was working with kids.

“She just always cared for kids, and she was always attracted to the ones no one else wanted to handle,” he said, adding she could spot an “underdog” from “a mile away.”

The 23-year-old newlywed from Manheim Township was a middle school student when she met Alexandra Chitwood. Back then, she had bad anxiety, especially over her various food allergies. Knowing she was anxious, Alexandra Chitwood invited Anderson to eat lunch with her. Soon, it was a tradition. They ate lunch together two to three times a week that year.

“She was just so supportive and caring,” Anderson said. “And it was so nice to feel I had somewhere to go if I was ever anxious or someone to just hang out with.”

“Mrs. Chitwood was someone who brightened up a room with her smile and laughter,” she said, “and she cared deeply for all students and staff. Her positivity permeated the halls of the building where she was highly regarded by all.”

According to Manheim Township Superintendent Robin Felty, Alexandra Chitwood was involved in anti-bullying and suicide awareness clubs. She also helped develop the college and career readiness curriculum for middle and high school students, and she regularly co-taught with teachers social-emotional lessons for students.

“Her personal connection with staff and students, at both the middle school and the high school, during her tenure was admirable; her absence will leave a mark in our district,” Felty said.

Alexandra Chitwood was with the district for 18 years, and was a counselor for both middle school and high school buildings, though the middle school was more recent.

One of the students she helped was Teagan Harris. Now a high school sophomore, Teagan had a concussion in eighth grade. Alexandra Chitwood helped her stay on pace with her classes and formed a strong connection with her and her mom, Courtney Morton.

As Election Day showed, democracy is alive and well in the US — and in Lancaster County. (Also, count every vote.) [editorial]

“Mrs. Chitwood was just so helpful in guiding us through the process of helping her so she didn't get behind, but she also was just so kind and loving,” Morton, 42, of Manheim Township, said.

Samantha McNally, a middle school social studies teacher and Manheim Township Education Association vice president, echoed what many said about her colleague. Teachers, she said, are in shock.

“There are a lot of teachers who feel that it shouldn’t have happened,” McNally said. “She’s too young to be gone.”

In a Facebook post, the teachers union asked its followers to wear red, Alexandra Chitwood’s favorite color, on Monday, and stated that there are many ideas being considered to honor her and support those who are grieving.

Kenneth Chitwood also has a message for those who will listen: Take COVID-19 seriously.

“I want people to realize, be careful. This will attack you,” he said. “I don’t care how healthy you are.”

Doe Run Elementary School will be closed on Monday, Nov. 9, after two “probable cases” of COVID-19, according to an email sent out to parents …

Too busy enjoying the nice weather this weekend to login to LNP | LancasterOnline.com? We got you covered.

Two Manheim Township parents were arrested after they allowed their teenage children to host several parties that involved underage drinking and drug use over the past year, according to criminal complaints filed by Manheim Township police.

Lancaster County has reached the “substantial” level of community transmission of COVID-19, according to an update to the state’s weekly early monitoring dashboard.

Warwick High School students will continue to receive virtual instruction through the remainder of this week, with administrators citing a con…

Pennsylvania recorded a new one-day record of 4,361 new coronavirus Tuesday as the curve of the state’s fall pandemic surge continued to steepen.

Manheim Township secondary students to learn remotely until next Tuesday, at the earliest, due to new COVID-19 cases

More students in Donegal, Manheim Township and Penn Manor school districts will be staying home at the start of this week as the number of new…

The Manheim Township school board on Thursday shot down a proposal that would have shifted all students online from Nov. 30 to Jan. 19 as a precaution against COVID-19.

Alexandra Chitwood, the Manheim Township counselor who died of COVID-19, would have been 48 Sunday

After a Manheim Township counselor dies from COVID-19, this foundation stepped in to get teachers living wills

Like many parents in the Manheim Township School District, Lisa Driendl-Miller’s two children had Alexandra Chitwood, who died of complication…

The Hempfield girls volleyball team willingly opted to wear masks at all times this fall – at practice and during matches.

Manheim Township School District is raising money for a scholarship honoring Alexandra Chitwood, a middle school counselor who died of COVID-19 last year, by holding a 5K on Mother’s Day weekend, May 8 and 9.