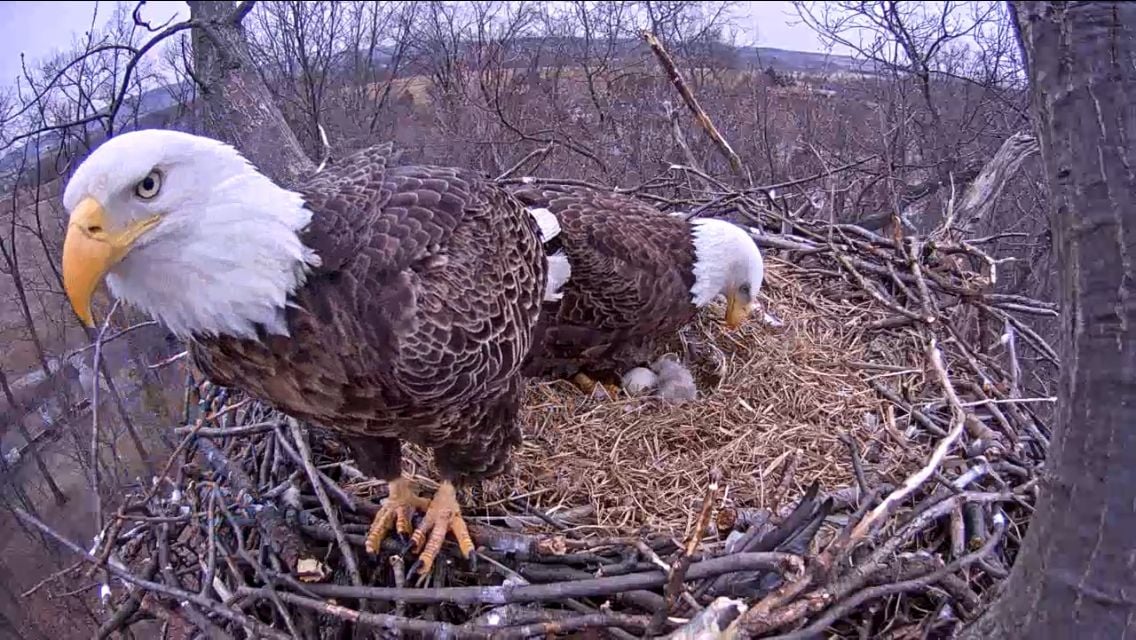 Both parents, their new eaglet and unhatched egg in the Eagle Cam nest around 10 a.m. Tuesday. 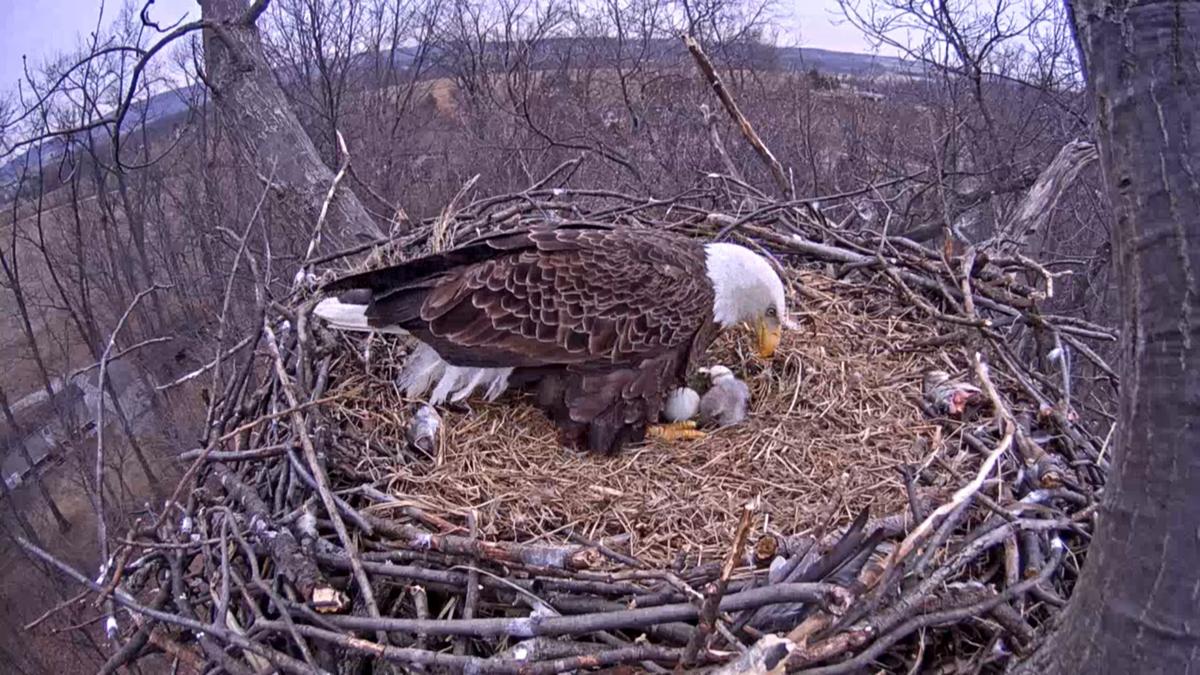 The new eaglet Tuesday morning on the Eagle Cam nest in York County. 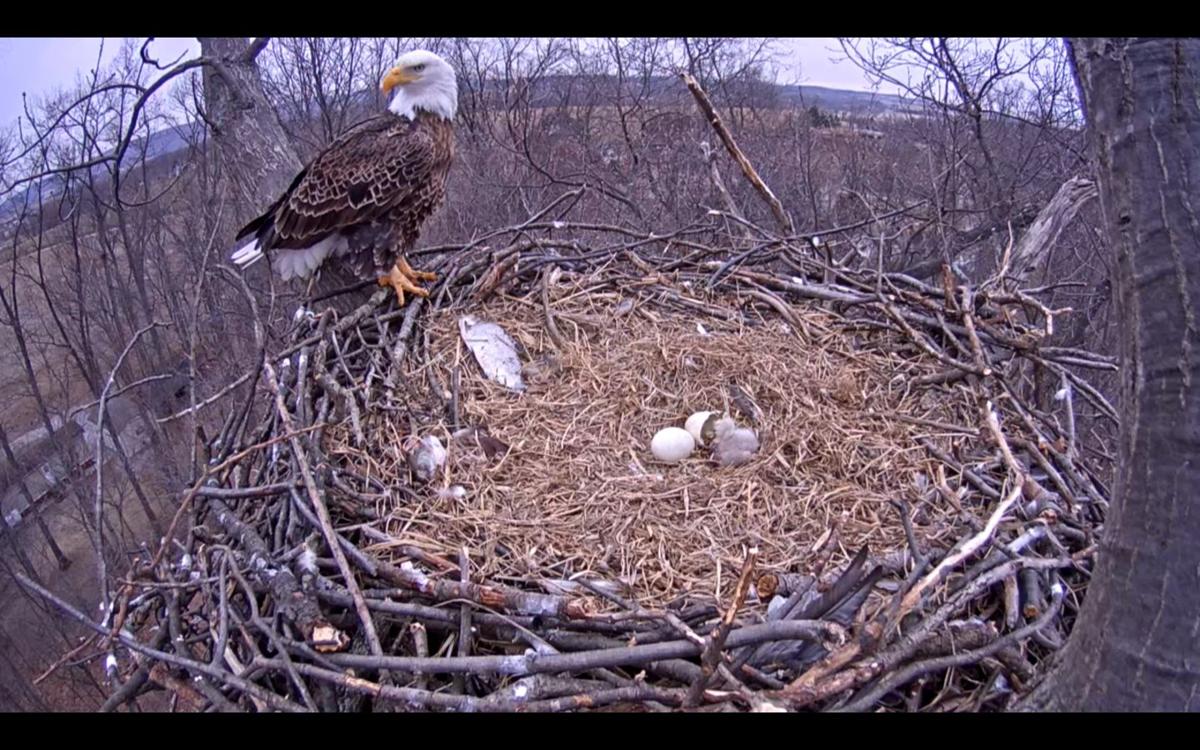 The new eaglet and one of the adults with a fish in the Eagle Cam nest. 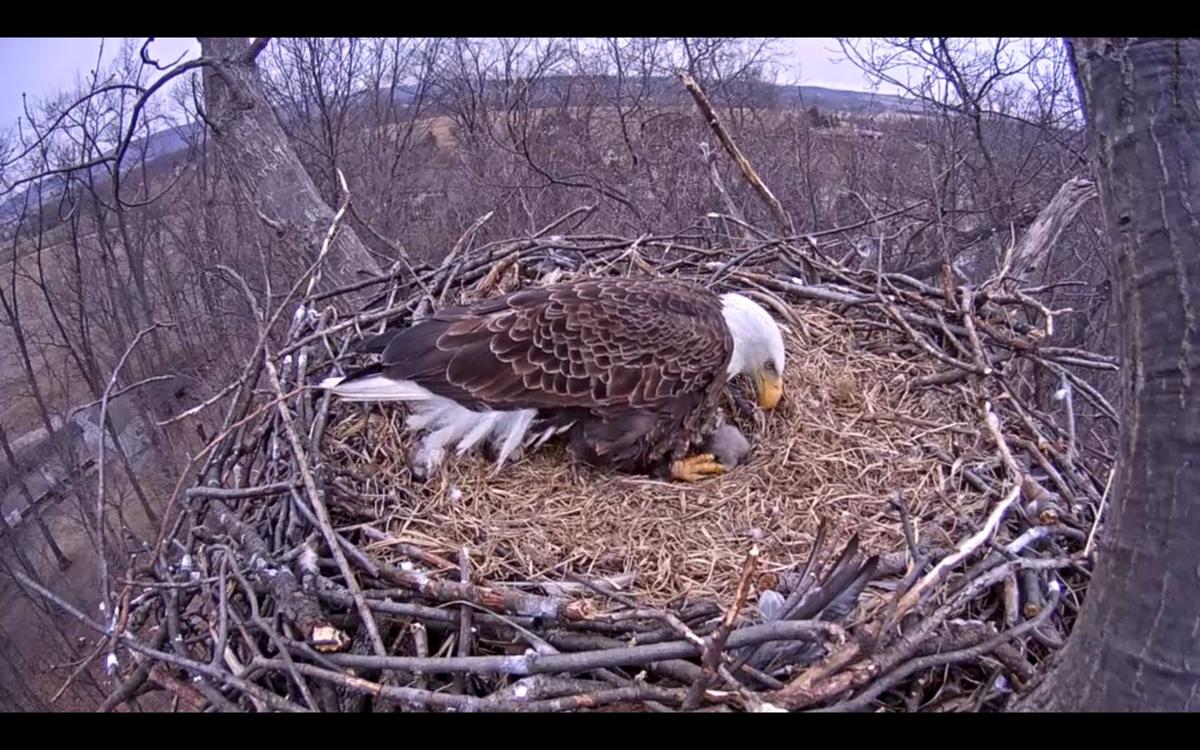 One of the Eagle Cam adult eagles fusses over its first eaglet Tuesday morning in the York County nest. 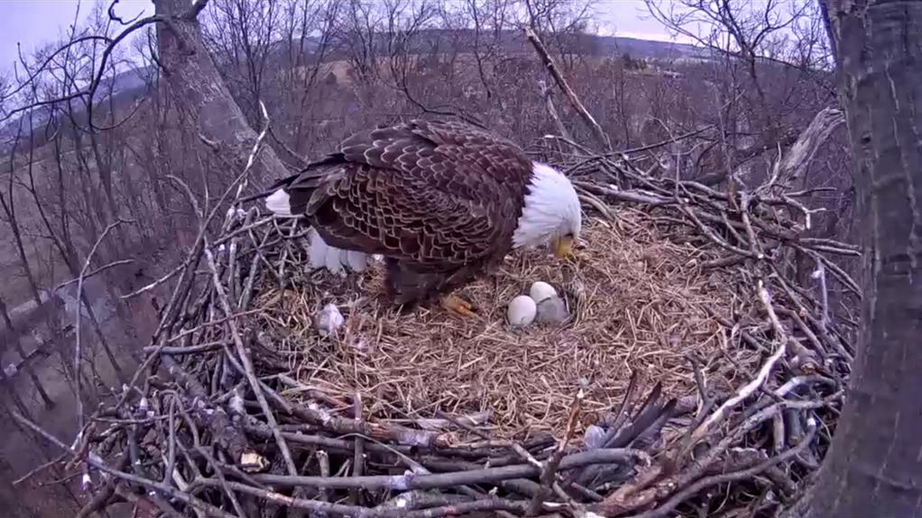 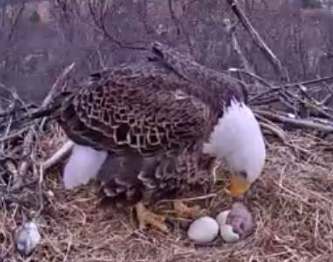 The first eaglet in the Eagle Cam nest was viewed by the world Tuesday morning.

Both parents, their new eaglet and unhatched egg in the Eagle Cam nest around 10 a.m. Tuesday.

The new eaglet Tuesday morning on the Eagle Cam nest in York County.

The new eaglet and one of the adults with a fish in the Eagle Cam nest.

One of the Eagle Cam adult eagles fusses over its first eaglet Tuesday morning in the York County nest.

The first eaglet in the Eagle Cam nest was viewed by the world Tuesday morning.

We have an eaglet!

Thousands got their first peek at the long-awaited first eaglet Tuesday morning when one of the parents stood up in its nest high in a tree near Codorus State Park in York County.

The Pennsylvania Game Commission’s live-streaming video on its phenomenally popular Eagle Cam captured the moment. To watch live, click here. To watch a video of the eaglet being fed fish strips by one of its parents, click here.

Shortly after 8 a.m., the two eagles did what is known as a  nest exchange, altering incubating duties. When one of the adults moved out of the way, a wet gray blob was revealed, partially still in the egg split in half. The adult eagles were vocal right before the eaglet was exposed.

“I saw it wiggle around in the nest. So cool," exclaimed a viewer on the Hanover Eagle Watch Facebook page. More than 60,000 people have joined that online group to experience the drama playing out in the Eagle Cam nest.

“I’m so happy I could cry,” said Marlae Frome, on the group’s Facebook page.

However, with so many people tuned it, the Eagle Cam crashed for about an hour but was working again for the rest of the morning and afternoon. However, it crashed again around 4 p.m.

During the afternoon, one or another of the eagles tucked the gray-feathered eaglet tenderly under its breast, along with the still-unhatched egg. The parent would stand up occasionally, nuzzle the eaglet with its curved beak and settle back in.

Viewers had been hand-wringing since Saturday’s due date for the first egg.

“Well, how about that. All in God's timing, not ours,” said Marilee Pennino on the Hanover Eagle Watch site.

We won’t know for at least several more days if one of the eggs was not viable.

But for now everyone seems caught up in the exhilaration of a spanking new eaglet.

Within an hour of pecking out of its egg, the eaglet was transformed from a prehistoric-looking wet blob to a fluffy chick, said Patti Barber, the Game Commission’s endangered bird biologist, when contacted by LNP Tuesday.

She shared viewers’ enthusiasm at the egg hatch. “This was the whole point of putting the camera on the nest, so that people can watch the birds go through the whole process and this is the next step.”

At first, the eaglet will be very weak and not even be able to hold its head up long, Barber said.

“They are very weak. They are like a newborn baby that can’t hold its head up. And they sleep a lot,” she said.

At 10 a.m. both eagles could be seen standing in the nest gawking at their firstborn. The eaglet was  flailing around in place.

Fish is the most likely diet of the new eaglet, Barber said. Indeed, two fish could be seen in the large stick nest as she spoke.

But other sources of food will be birds, squirrels and anything else the parents can rummage up.

“The bigger the chick gets, the more food those birds will need and the adults will have to work pretty hard for them,” Barber observed.

Since a chick can’t control its own body heat until it's 20 days old, the parents will still spend a lot of time covering it.

“The adults are like a giant heat lamp when the chicks are cold,” according to Barber.

Because of the need to be a heat source and to protect the vulnerable chick from such predators as gulls, climbing animals and other birds of prey, there will be at least one adult eagle in the nest almost constantly.

The eaglet won’t be ready to fly away on its own, or fledge as it’s called, until late June or early July.

So Eagle Cam fans still have a lot of screen watching in store.

Those fans are hoping Tuesday’s hatching was the first egg and a second eaglet is still to come shortly.

If so, having competing siblings will tax their parents.

Crucial will be food availability to sustain both eaglets.

If there is plenty of prey around, all should go well. But if there is a shortage, it is not unusual for the older eaglet to wrest away food provided, and, on occasion, even kill its sibling.

“If there is a lack of food, it’s more likely for the adults to raise the older chick,” said Barber. “The bigger the gap in their age, it’s easier for the older chick to dominate the younger chick.”

It’s nature’s way  of playing the odds on the basis of one new eaglet is better than none.

If one of the eggs is not viable, it will gradually deflate and become part of the nest material, Barber said.

LancasterOnline.com viewers over the weekend named the first eaglet Honor. If there is a second eaglet, it would be called Justice. Their parents are Liberty and Freedom.

Here is a video of the moment the world saw the first eaglet. At 1:38 into the video, the second eagle flies into the nest. At 2:45, the eagle on the eggs rises up and flies off, revealing the eaglet still partially in the shell.

Here's what people are saying about the new arrival on the Hanover Eagle Watch Facebook page:

Kris WeatherbeeI have to say it: the eagle has landed!