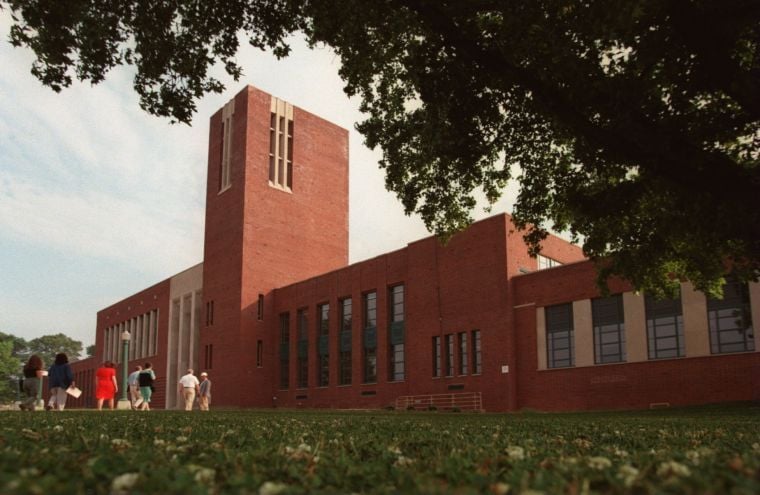 J.P. McCaskey High School is shown in this file photo. 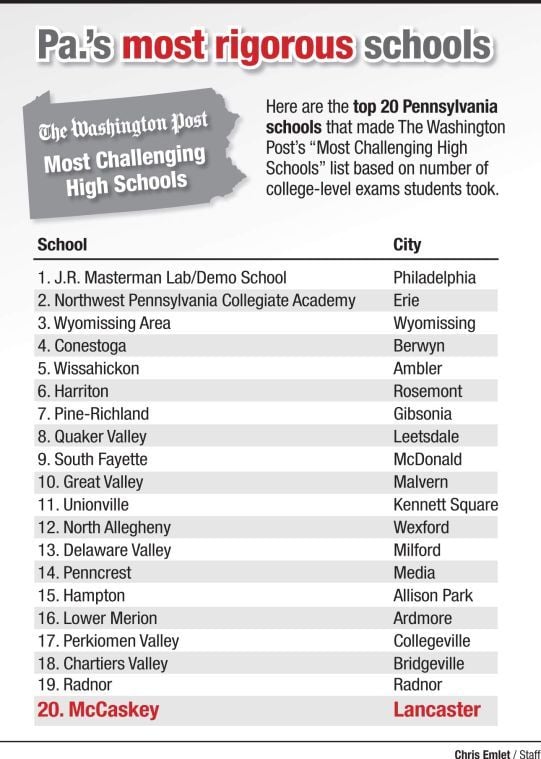 J.P. McCaskey High School is shown in this file photo.

Student test scores are often used to evaluate schools, but The Washington Post thinks test participation is also worth measuring.

The national newspaper last month published its list, "America's Most Challenging High Schools," which scores schools based on the number of students who attempt college-level exams.

McCaskey High School in the School District of Lancaster ranked 20th on the listing of the most rigorous high schools in Pennsylvania.

No other Lancaster County schools made the list. The nearest school that did was Lower Dauphin High School in Hummelstown.

That ratio doesn't mean every student takes a college-level exam, though.

McCaskey offers AP and IB courses, both of which are aimed at preparing students for college. Many students enrolled in such classes take multiple exams to acquire college credits.

Like senior Tracey Nguyen, 17, who sat for her fourth test last Thursday. She had six more to take after that.

"I have testing two weeks straight, but this is my first week, so I'm still holding out," Nguyen said before starting her AP literature and composition exam.

Nguyen was surrounded by 246 peers taking the same test or the one for IB world religions.

The group was the biggest single testing cohort in McCaskey's history — so big the staff had to clear out one of the gyms and set up rental tables and chairs for the students.

That's a big jump from when he started in his position eight years ago. At the time, the school administered 100 IB tests for 40 students.

Richer said McCaskey's IB program, which was started in 2000, has grown through staff and families encouraging students to enroll.

"What you're seeing now is second, third and fourth siblings. Kids now come to us in ninth grade knowing they're going to do the IB diploma. ... It'd be nice to have to close down both gyms some day."

But even as the program grows, Richer acknowledges that economics are a challenge.

It costs $150 to register for IB exams and $110 for each test. AP exams don't require a registration fee but each test costs $89.

Richer said the school receives $38 per test in federal reimbursement and provides financial assistance when possible. They could use more, though, he said.

In 2013, 81 percent of McCaskey students received free and reduced lunch, according to the state Department of Education.

Of the 19 Pennsylvania high schools that were ranked above McCaskey, only five had a free and reduced lunch rate higher than 15 percent.

The free and reduced lunch rate closest to McCaskey's rate was 33 percent at J.R. Masterman Laboratory and Demonstration School in Philadelphia.

Despite the financial hurdles, Richer said the school encourages every student to consider college-track courses.

"The only thing you need to do to sign up for one of our courses is raise your hand," he said.

"I decided not to count passing rates in this way because I found that many high schools kept those rates artificially high by allowing only top students to take the courses."

"... Research has found that even low-performing students who got a 2 on an AP test did significantly better in college than similar students who did not take AP."

It's that college success that Richer and IB English teacher Brian McDonald said excites them — even more than McCaskey making the challenging schools list.

They have the students to prove it. Students like Aaron Swinton, who happened to stop by Richer's classroom during his interview.

"You're not doing 20-page papers in any other program ... a lot of (my college classmates) weren't prepared."

"(The teachers) expect a lot out of you, and that's the hardest part," she said.

"The quality of work is the most important. You can turn everything in on time, but if it's not up to par with what they want, then (it doesn't matter)."

Kara Newhouse is a Lancaster Newspapers staff writer who covers K-12 education trends and policies. She can be reached at knewhouse@lnpnews.com or (717) 481-6013. You can also follow @KaraNewhouse on Twitter.

Which Lancaster County high school made The Washington Post's list?