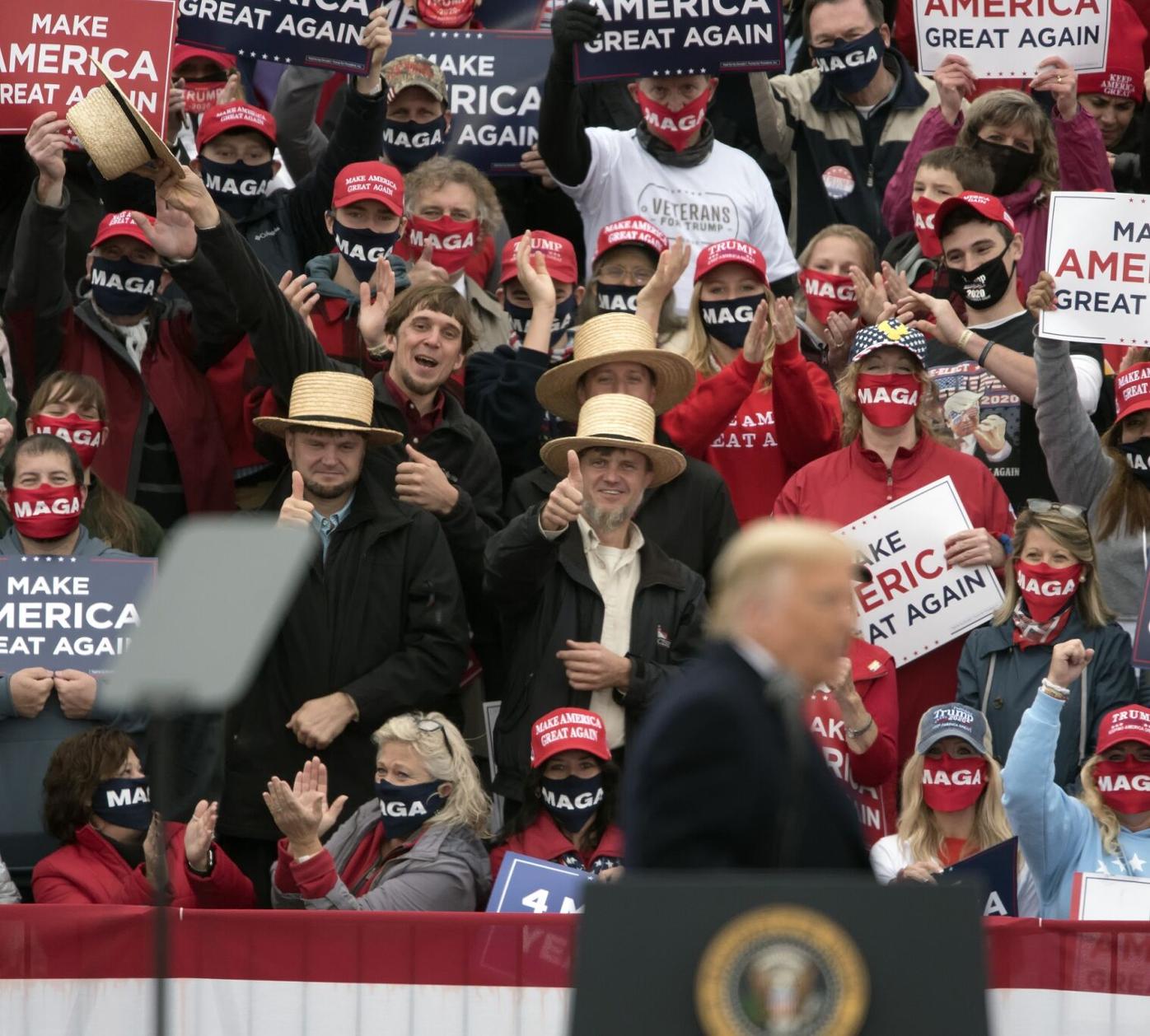 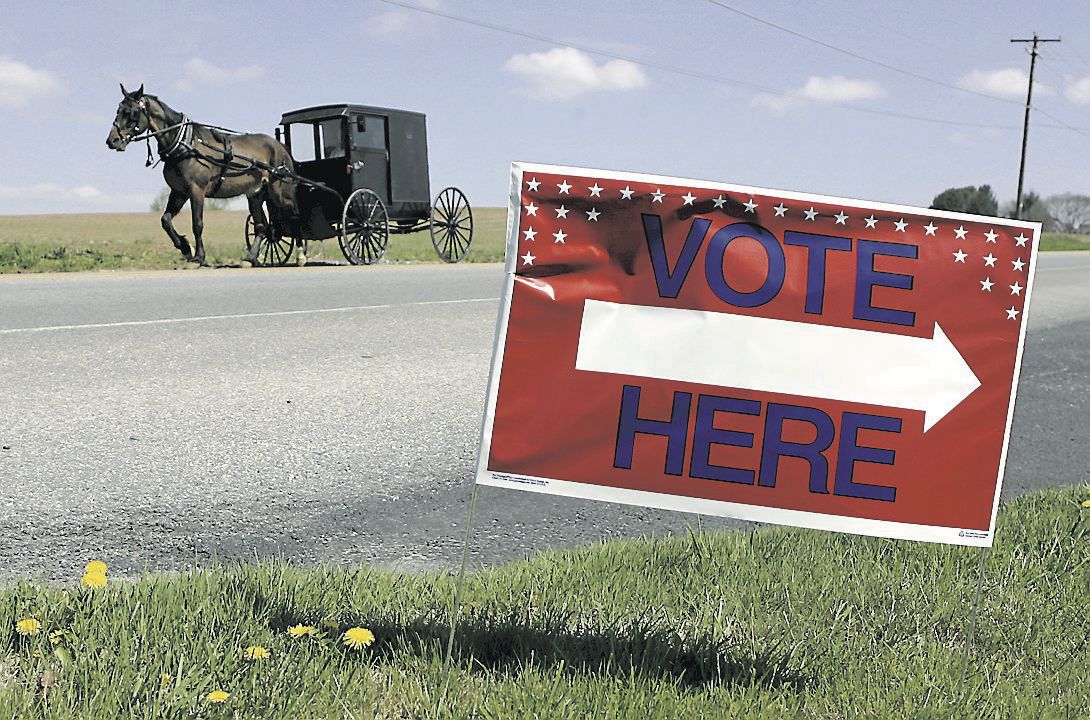 An Amish horse and buggy goes past a polling station in this photo from 2014.

In the sea of hundreds of red “Make America Great Again” hats, four men stood out.

The group caught the attention of plenty of attendees at President Donald Trump’s Oct. 26 campaign rally at Lancaster County’s airport for a few reasons: They were the only ones in the stands behind the president who did not wear masks, they were dressed in straw hats and Plain dress, and they were strategically placed so cameras showed them over Trump’s right shoulder.

Trump mentioned the “Pennsylvania Dutch” during his speech and then turned to acknowledge the men. One returned a thumbs-up to the president. Another man recorded on a cell phone.

“Don’t tell anybody, but the Pennsylvania Dutch are voting en masse,” Trump said. “They’re voting. I heard that the other day.”

Candidates and elections come and go, but in Lancaster County there’s always the question: Will the “Pennsylvania Dutch” -- one of the largest untapped pools of conservatives -- register and vote?

Rooted in a strict, Anabaptist tradition of Christianity, the Amish -- as they are referred to even though they are divided into communities following different teachings and traditions -- are the living embodiment of conservative values. But for the most part, the adults in these communities don’t vote, holding to a worldview that emphasizes citizenship in God’s kingdom as opposed to the worldly one, according to religious scholars.

The Amish community is not as large as some may think -- just 80,000 people in Pennsylvania, according to estimates made by Elizabethtown College. But in back-to-back presidential elections decided by fewer than 100,000 votes in the state, getting unregistered conservatives to the polls is vital. And Republicans spent much of the past four years to convince the Amish that casting a vote is essential.

President Trump easily won Lancaster County in 2016 and 2020, and the high turnout by GOP voters in the most recent election was driven, at least in part, by precincts in Amish communities.

Although it is not yet clear how many of these new Trump voters are Amish, the results suggest the multi-year effort to register these communities was successful.

While a political action committee has targeted the community with advertisements and billboards since 2016, local Republicans took a different approach, reaching out directly to every Amish household in the region.

U.S. Rep. Lloyd Smucker, who was reelected this month to a third term to represent Lancaster and southern York counties, said his campaign registered approximately 1,000 Amish voters ahead of the 2020 election. The campaign sent a mailer with voter registration paperwork to every Amish household in the district informing them of the importance of their vote, he said.

In reaching out to the Amish communities, Smucker’s personal background is an asset: He was born into an Amish family, though his parents left the community when he was still a child.

Smucker’s campaign targeted this community because he said he had noticed an increased interest in this election among young Amish people, a development driven in part by opposition to increased government restrictions put in place to control the spread of the coronavirus pandemic.

“There is a growing awareness of the importance of federal regulation, federal policy as it impacts them, and I think we will continue to see [turnout] grow,” Smucker said. “[Increased turnout] has to do with supporting the president, but probably has even more to do with [an] election that really did provide a contrast in regards to the direction to take the country.”

David Lapp, CEO of Blessings of Hope, a faith-based food bank in Leola hosted Ivanka Trump during a visit in September, said he personally knows at least 15 to 20 Amish people who voted for the first time in the 2020 election. He estimates that Amish turned out in “record numbers,” attracted to the Trump administration’s promotion of religious freedoms and opposition to abortion.

Even if Trump isn’t on the ticket in future elections, Lapp said he believes Amish people will continue to vote in midterm elections, in reaction to the government restrictions on public gatherings and businesses implemented during the COVID-19 pandemic.

“I know for myself ... I never put too much focus on the governor of the state,” Lapp said. “These last nine months put a different urgency to see the powers they have and make sure the person elected has the right policies.”

During the 2016 election year, two Republicans formed Amish PAC to target Amish voters in two key states -- Ohio and Pennsylvania -- and get them to vote for Trump.

The PAC was active in 2018, and in 2020 it raised approximately $180,000 in contributions from donors around the United States, though no donations came from Lancaster County residents, according to its latest Federal Elections Commission filing.

This year, the PAC spent more than $150,000 on billboards, advertisements in local media and to set up a hotline for Amish people to call with voting questions, said Taylor Swindle, the PAC’s treasurer and founding member.

“I think it’s a community that should be advertised to,” he said. “It doesn’t get the millions and billions of dollars spent, because they don’t have the access to technology that’s constantly pounding them to go and vote. We saw it as our duty to inform them there is an election.”

Smucker, for his part, believes it was in-person networking that was most effective in reaching potential Amish voters.

“I think this was word-of-mouth among the Amish community, understanding what was at stake in this election, talking to their friends and neighbors. That’s what had the most impact,” Smucker added.

How essential Amish voters are to the Republican Party in the future is unclear, at least in fast-growing Lancaster County.

Lancaster’s Amish population grows by approximately 1,000 people annually. But even if the Amish communities vote at higher rates, the party’s majority status will likely depend on recruiting the growing number of professionals moving to the county as the Philadelphia commuter population expands westward.

Since 2000, Democrats have gained more than 50,000 voters in the county. GOP registrations are up as well, but the proportion of county voters registered as Republicans fell from 62% of the electorate in 2000 to 51% in 2020.

Amish voters also may not be reliable at the polls. The 2016 efforts to get Amish out to vote were not successful compared to the 2004 presidential election. According to a 2017 study by researchers at Elizabethtown College’s Young Center for Anabaptist and Pietist Studies, fewer Amish registered and voted for Trump in the 2016 election than the unusually high 13% of Amish who voted in 2004.

The Young Center’s team conducts careful analysis of election returns, contacting individual voters to confirm their membership in the Amish community and how they voted. Of the 15,055 eligible Amish voters in Lancaster County in 2016, the center’s team found only 2,052 were registered and only 1,019 turned out to vote on Election Day that year.

The Young Center will conduct a similar study in 2021 to determine whether there was an actual increase in Amish turnout in 2020, its director Steven Nolt said.

No matter how many more Amish voted this year, it’s likely that most community members in Lancaster County didn’t cast a ballot.

“There was a lot of pressure this year,” said one Amish man who spoke with an LNP | LancasterOnline reporter in mid-November. “We got a lot of mail about the election, including a personal letter from Smucker,” the man said, declining to give his name to an outsider. “It was hard to decide whether to vote, and we decided to continue doing what we’ve always been doing. I didn’t know who to vote for.”

The same man added that he knows multiple people who do vote, but his family never has voted.

“The other thing is we hope that God will take control and he brings in the right person,” he added.

While Amish don’t usually participate in the political process, they are engaged civically in modern society in many ways, said  Kyle Kopko, an adjunct political science professor at Elizabethtown College. For example, multiple fire companies in Lancaster County have Amish volunteers, and they participate in multiple charitable efforts like Blessings of Hope or the Mennonite Central Committee.

“There is this distinction about what one should strive for in their Christian religious beliefs versus worldly beliefs,” he said. “Combine that [civic engagement] with their emphasis on peacemaking and nonviolence … all those reasons together help to explain why members of the Plain community historically have not engaged in voting to a wide extent.”

Correction: Steven Nolt's first name was misspelled in an earlier version of this story, as was the name of the Mennonite Central Committee.

Pennsylvania lawmakers cannot overturn the results of the election [column]

Over the past few weeks, we have received many calls, emails and letters raising concerns about the 2020 election. The overwhelming majority o…

President Donald Trump spoke with Pennsylvania House Speaker Bryan Cutler twice in the past week, asking one of the state’s highest ranking Re…

Everything you need to know about Pennsylvania's Electoral College ceremony Monday

Today at noon, the next stage of the 2020 election is set to take place.