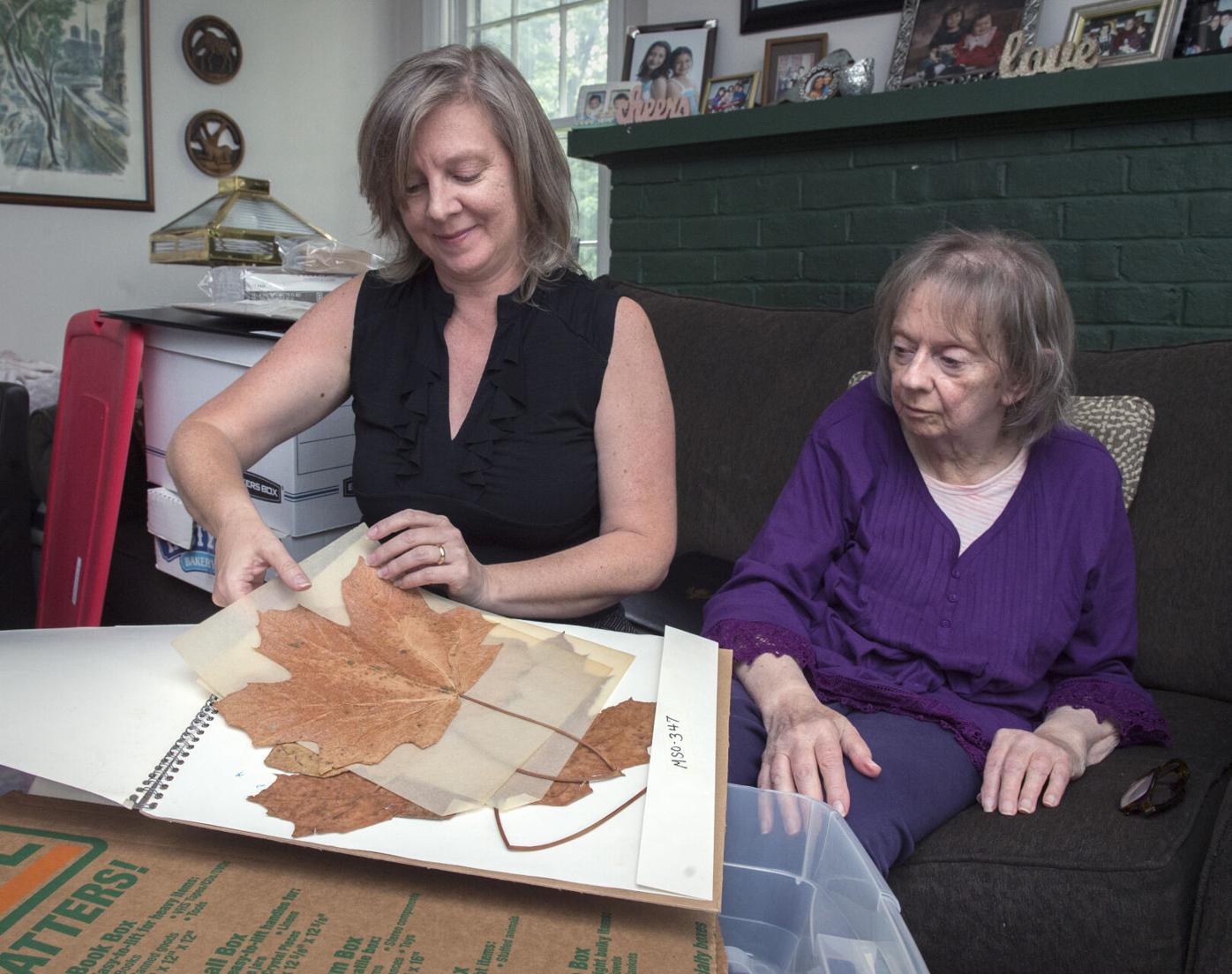 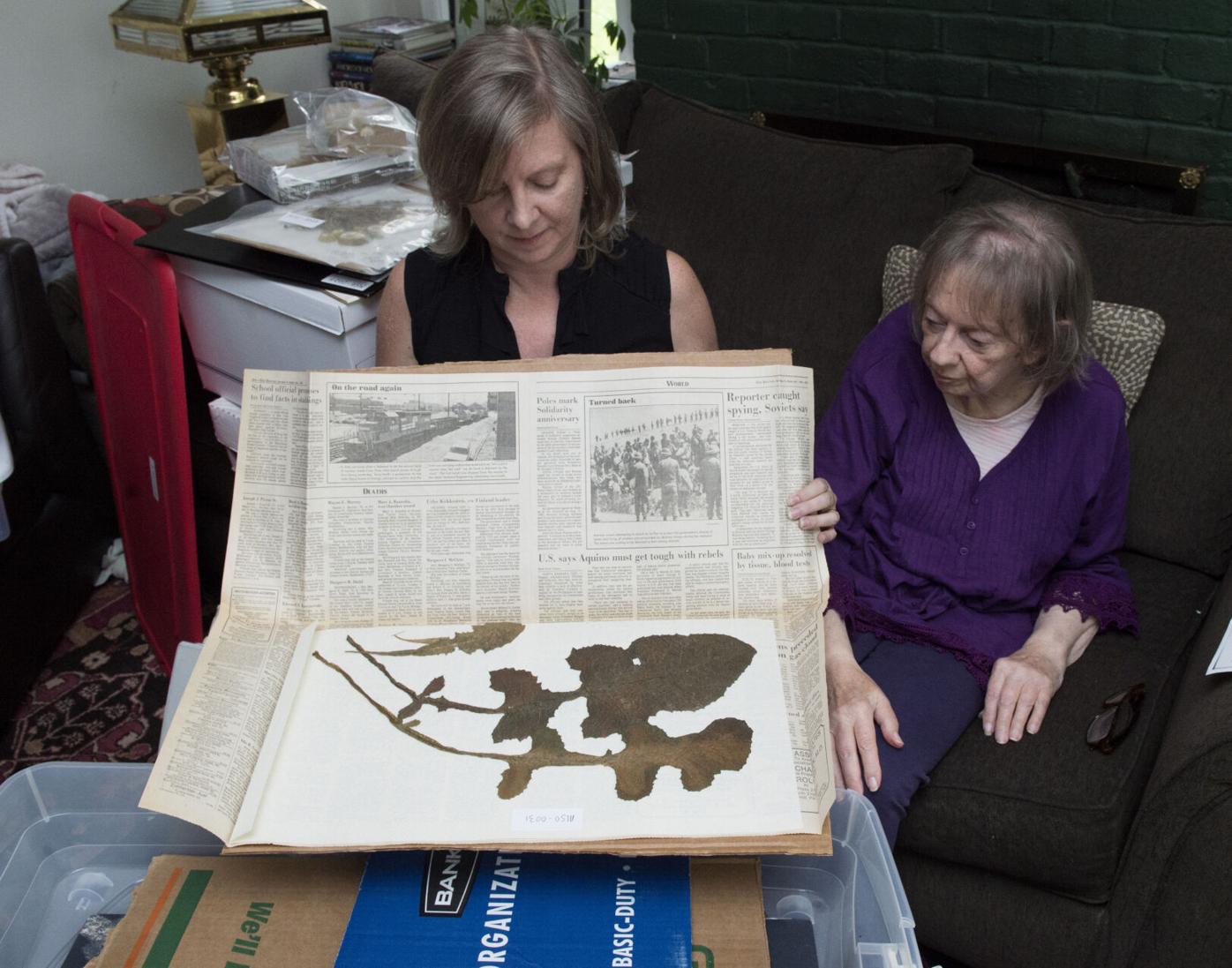 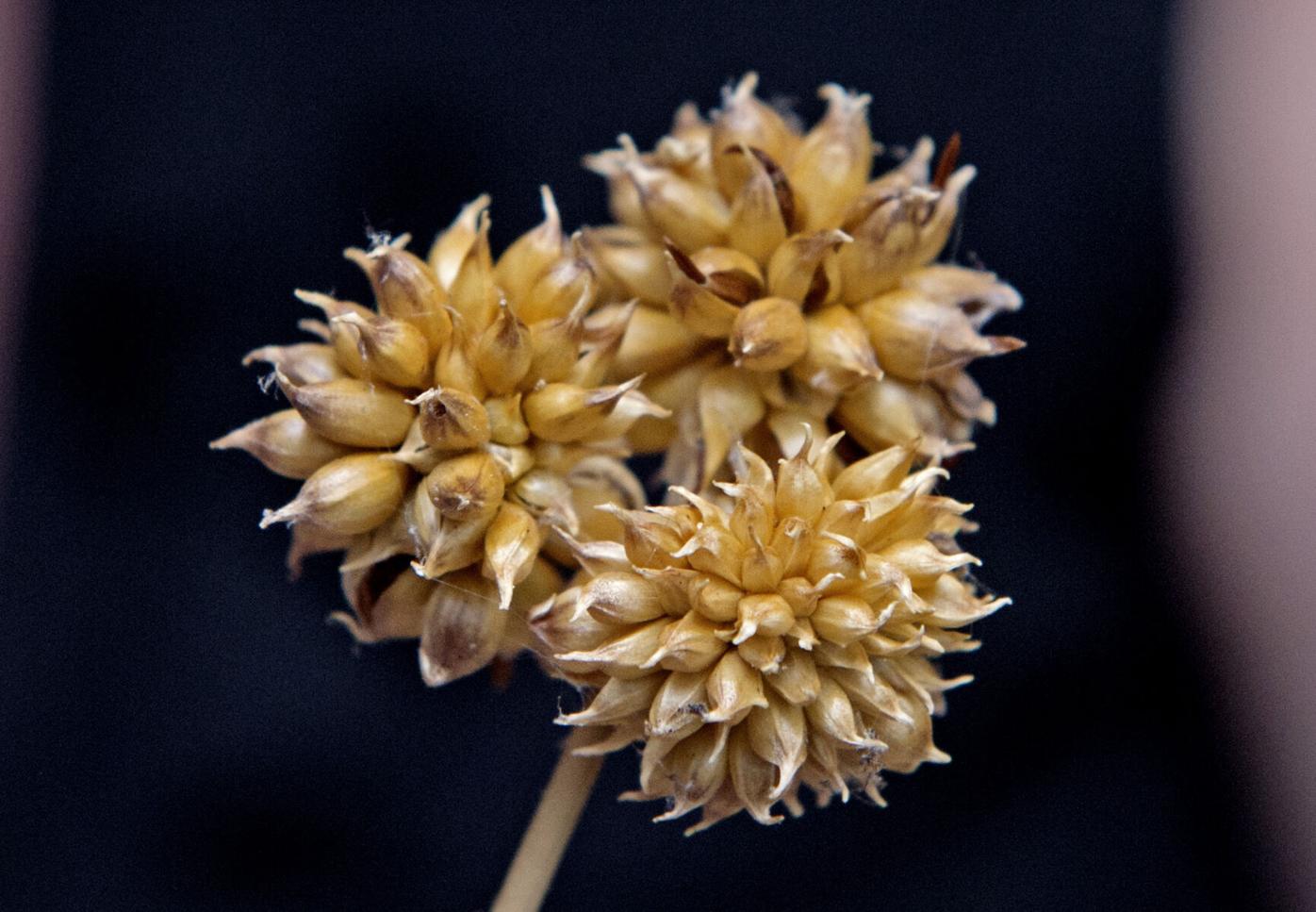 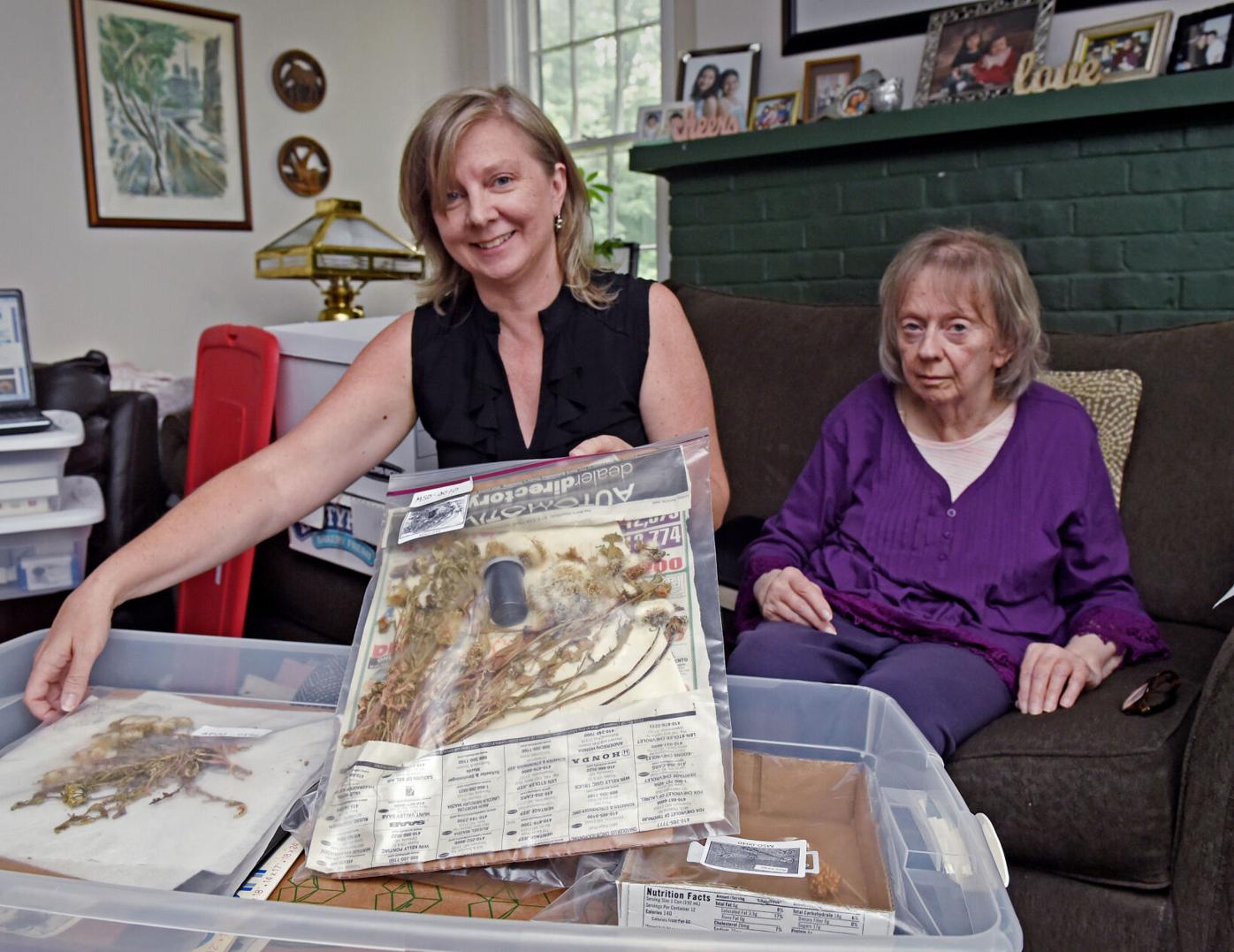 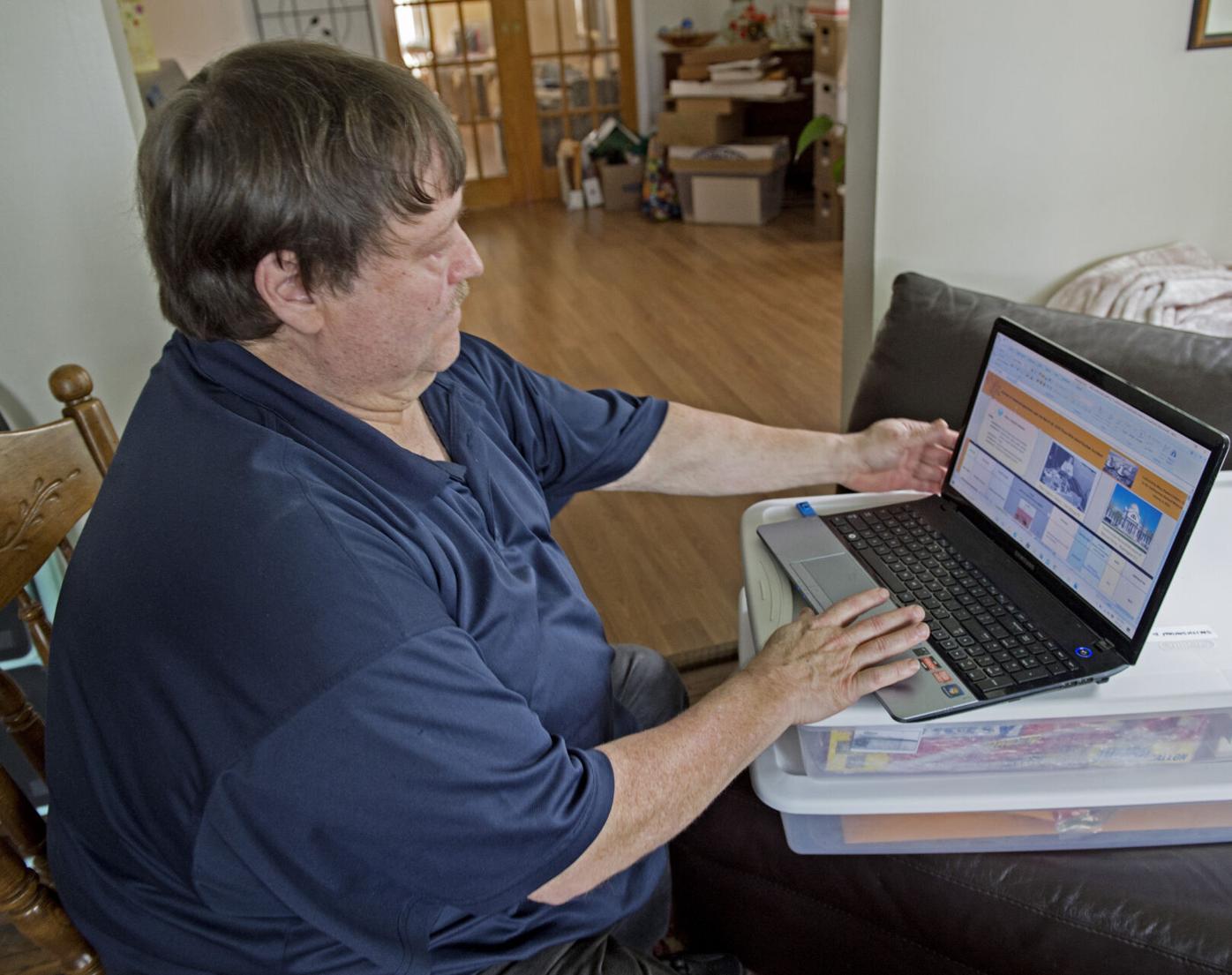 Scott Portzline, of Three Mile Island Alert, looks though a database of plants and flowers with abnormalities collected by Mary Stamos after the 1979 accident at Three Mile Island, Thursday, June 3, 2021. 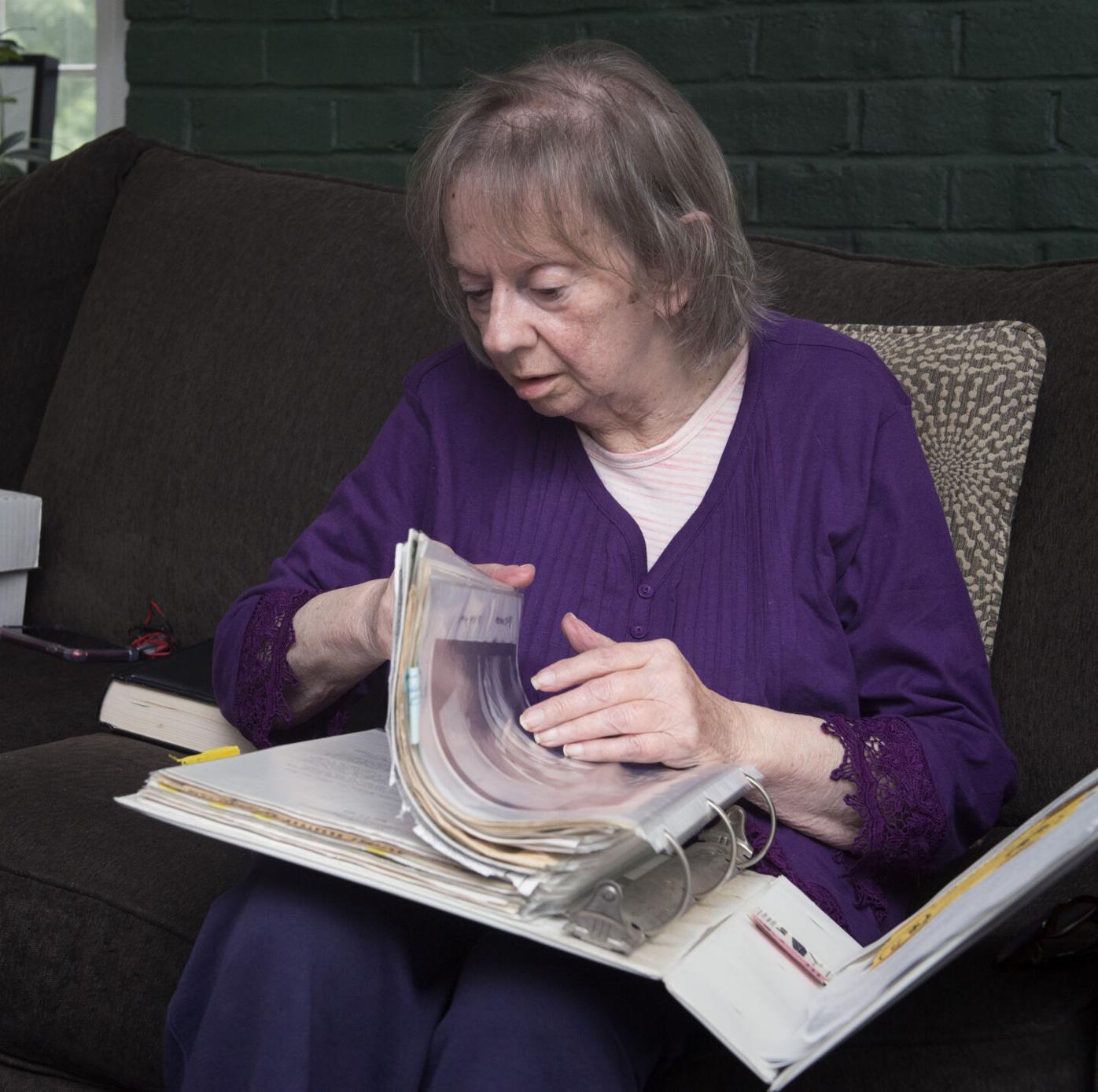 Mary Stamos looks through a binder with notes about and pictures of abnormal plants she collected after the 1979 accident at Three Mile Island.

Mary Stamos remembers looking out at the dandelions growing in her yard with a feeling of despair — not because the flower-sporting weeds were taking over her pristine, grassy lawn, but because they looked so weird.

The typically round stems were all wrong, she said, recalling the spring of 1979.

“They were about 2 inches wide and flat,” Stamos said before describing her fear at seeing them for the first time. “I was crying. ... I was really upset.”

It was just weeks after the March 28 partial meltdown of Three Mile Island Nuclear Power Plant’s Unit 2 reactor, and Stamos said she suspected that radiation released during the accident caused the dandelions to mutate into their warped forms.

Eventually, Stamos said, she became convinced, finding hundreds of similarly misshapen plants in the area surrounding the accident site, which is about 8 miles northwest of the Swatara Township home where she lived at the time with her family, including two young children.

She then set out to document her findings, collecting dozens of the irregular plant samples over the decades since, including from Lancaster County. Those samples have been dried and preserved, Stamos said, with hope that they can be used to illustrate the potential danger that accidents at nuclear power plants can pose to plant life, as well as humans and animals.

That’s especially true if scientists can prove that radiation was the cause of the plant irregularities, according to Scott Portzline, Stamos’ colleague with the Harrisburg-based nuclear watchdog group Three Mile Island Alert. Researchers at the Smithsonian Institution in Washington D.C. have expressed interest, Portzline said.

Stamos, now 77, spoke about her efforts last month while seated among some of her plant samples on a sofa inside of the Harrisburg-area home of her 51-year-old daughter, Leslie Amoros, who was 9 at the time of Unit 2’s partial meltdown.

Shortly after the accident, Stamos said, it was Leslie who unwittingly plucked one of the first suspiciously shaped plants. It stood out among a bouquet of daisies pulled from a field near their home, Stamos said.

“Instead of having a yellow, round center it was pinched, like somebody squished their fingers right on it,” Stamos said.

The moment she saw it, Stamos said, her thoughts went back to her school days as she recalled a science lesson from a teacher who spoke about radiation and its potential to cause mutations. The teacher even showed photographs of mutated flowers.

“I’m a little bit of a nerdy person, and I loved flowers,” Stamos said, recalling the lesson. “And I saw it and thought it was like a science fiction movie.”

After seeing the daisy, she began to spot — and eventually collect — similarly misshapen plants throughout the region, including from as far away as Lancaster city, where she used to work as a paralegal.

Stamos said she believes radiation from the partial meltdown could have been carried on the wind, possibly far distances from the power plant, which sits in the Susquehanna River just north of Lancaster County.

The Three Mile Island power plant is now defunct. Unit 2 hasn’t been operational since the accident and its other reactor, Unit 1, was taken offline in 2019.

Last month, Amoros helped her mother show off some of the dried-out samples, first gingerly removing what she described as abnormally large leaves from between the flaps of a folded piece of cardboard.

“The leaves were so big they didn’t fit under a piece of paper, and normally two or three leaves would,” Stamos said. “That kind of flipped me out.”

Stamos said she remembers how concern increased in the local community in the days that followed the partial meltdown — the worst commercial nuclear accident in U.S. history. As officials released more information and rumors circulated, fear set in, she said.

In fact, Stamos, a homemaker at the time, said her family evacuated, leaving the area for about eight days before returning home.

It’s a story that Stamos seemingly likes to tell, and she has told it often — during related speaking tours and at anti-nuclear rallies, where she shared her findings with other citizen scientists, researchers and activists.

She’s also previously shown off her plant collection to reporters. During one of those interviews, she lost a prized specimen — a strange rose with multiple flowers, one growing right out of the center of the other.

“I had that for a while and I had it dried pretty good, and then a guy from one of the major newspapers came and interviewed me,” she said. “I had the flower on my table and he leaned backward and sat on it and it broke.”

Stamos says she sees similarities between her samples and plants collected from near other nuclear disaster sites, including the Chernobyl and Fukushima power plants.

In Amoros’ living room, the samples Stamos collected near Three Mile Island included enlarged dandelion greens and a clover with three heads growing where only one should exist.

It’s true that radiation can cause plant mutations, according to Maja Klosinska, an assistant professor and expert in plant molecular biology at Millersville University. But mutations can also be caused by numerous other factors, she said.

They can even happen naturally, without any external cause, due to mistakes that occur as cells divide, Klosinska said.

Because so many different factors could be involved, Klosinska said it would be impossible to simply look at a misshapen plant and come to the conclusion it was the result of radiation exposure.

With that said, clues could lie in genetic material, as radiation is known to alter DNA in specific ways, Klosinska said. Even still, it likely would be hard to pinpoint a definitive cause without additional information, she said.

“You can never say anything with absolute certainty, but that would be a hint,” she said.

Viewing photos of Stamos’ samples, Klosinska took note of the larger-than-normal leaves among the collection. Enlargement has been identified as a result of mutation caused by radiation, she said, before again stressing the inability to name a cause by simply examining external appearances.

“It needs to be investigated,” she said.

Because plants are rooted to the ground, they are often more susceptible to radiation releases, Klosinska said.

“Plants cannot hide. They cannot remove themselves from harm’s way like a human could,” she said.

And mutations can be passed down from generation to generation, giving some merit to Stamos’ decades of collecting, Klosinska said, though deformities likely would be less pronounced in later generations.

Radiation was released during the 1979 accident, but officials at the U.S. Nuclear Regulatory Commission have long maintained that the amount was minor.

“The approximately 2 million people around TMI-2 during the accident are estimated to have received an average radiation dose of only about 1 millirem above the usual background dose. To put this into context, exposure from a chest X-ray is about 6 millirem,” reads an NRC summary of the partial meltdown.

It also references the findings of numerous studies conducted by federal and state regulators, as well as independent research groups.

“In the months following the accident, although questions were raised about possible adverse effects from radiation on human, animal, and plant life in the TMI area, none could be directly correlated to the accident,” the summary reads.

Equipped with Stamos’ work, the watchdogs at Three Mile Island Alert are looking for a more definitive answer, according to Portzline, who helped catalog the samples and build a digital database that includes images of the plants alongside information about exactly where and when each was collected.

“Someone had to do this,” Portzline said, admiring Stamos’ samples for their scientific potential while all the time remaining slightly skeptical. “I’ve always known about Mary’s collection since even before I met her.”

For at least half a decade, Portzline said he’s hoped to get the collection organized to a point where it can be easily analyzed — hopefully by researchers at the Smithsonian Institution, whom he’s been in contact with for years.

“The first time I called them it was clear to me that the scientific interest was off the scale,” Portzline said.

He said it’s his hope that select pieces from the collection will be sent sometime in the next weeks or months to the botany department of the institution’s Natural History Museum. There, he said, future testing technology may finally be able to answer whether radiation caused the abnormalities in Stamos’ collected plants and, more specifically, whether that radiation came from Three Mile Island.

Over the past month, a spokesman for the Smithsonian Institution said he’s been unable to reach officials who can share related information.

In the meantime, Stamos said she’ll remain convinced that the misshapen plants she collected over the years were a direct result of the partial meltdown at the Three Mile Island power plant.

“You have two kinds of people: some believe what I’m saying and some don’t,” Stamos said.

Piled in thousand-ton heaps, garbage was a putrid mountain, stacked about two stories tall i…

More than $510,000 was raised through the Mother’s Day truck convoy to go toward granting life-changing wishes to children with critical illne…

Ever wondered about trash-burning emissions in Lancaster County? There's a website for that.

Emissions released from a northwestern Lancaster County trash-burning facility can now be tracked online, according to its owners and operator…

'A significant gift': Local woman's collection of warped plants from around TMI headed to Smithsonian