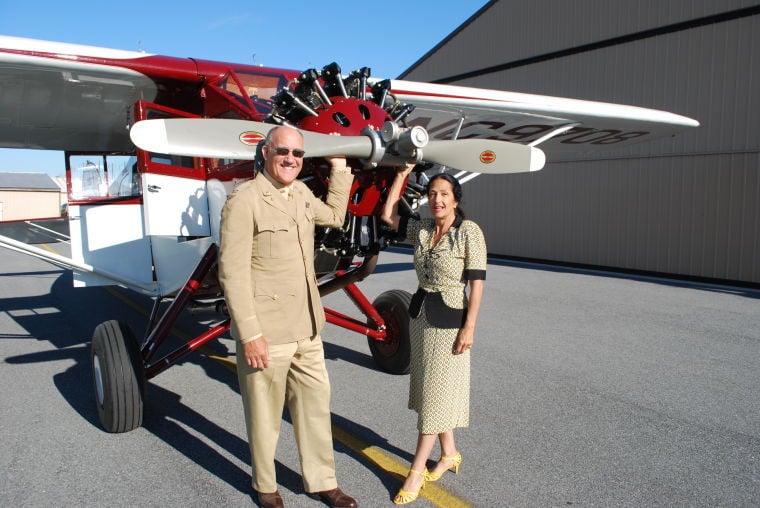 Standing with a 1929 Fairchild 71 aircraft at the annual fly-in at the Smoketown Airport on Saturday, David Beiler wears a World War II pilot’s uniform and Linda Marcks wears a 1942 dress. 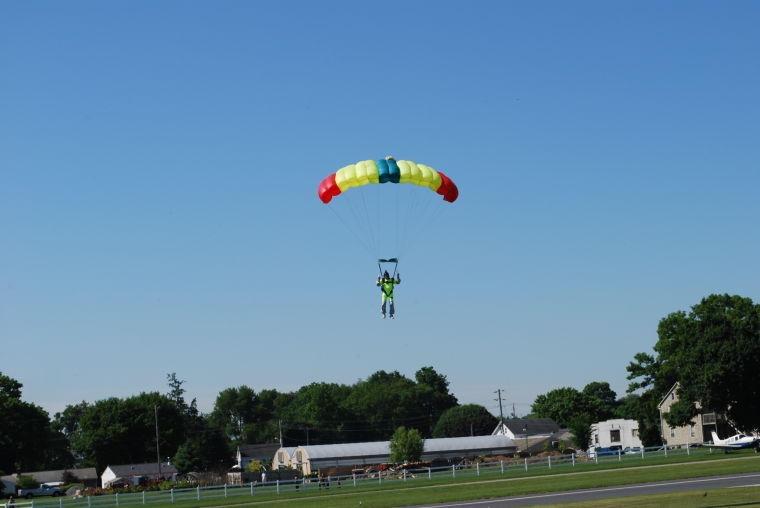 Standing with a 1929 Fairchild 71 aircraft at the annual fly-in at the Smoketown Airport on Saturday, David Beiler wears a World War II pilot’s uniform and Linda Marcks wears a 1942 dress.

Skip Sherman has always had a passion for flying.

He says, “It’s the closest to Heaven you’re ever going to get.” And then, with a twinkle in his eye, adds, “Maybe.”

Sherman was one of more than 300 enthusiasts who came out for Saturday’s annual fly-in and cruise-in at Smoketown Airport.

The day was packed with things to see and do.

Quite apart from the traditional pancake breakfast, more than a dozen small aircraft were on display, along with about 50 vintage cars of every description, free Young Eagle plane rides for youngsters ages 7-18 and a daredevil parachute jump.

The weather was perfect — blue skies without a hint of wind.

Many were there to admire flying machines that went back to the 1930s.

Others took a trip down memory lane when they used to fly for a living.

David Beiler from Gap wore a World War II pilot’s uniform and was accompanied by Linda Marcks in a 1942 dress.

He used to fly for Pan Am Express, while she was a Pan Am flight attendant for 16 years based in London. Beiler says what attracted him about flying was the utter freedom it offers, while Marcks says, “I simply love planes.”

And there were flying visitors, too.

Jan Grover flew in from Weatherly, about a 45-minute plane ride away, in his Piper Cub 1939 J4 model.

He says it was a landmark development in the Piper design having the first side-by-side cockpit for two people.

Grover has a passion for flying and says he’s been in a plane since he was an infant because his father was a pilot.

The fly-in was organized by the Lancaster chapter of the Experimental Aircraft Association, a flying club with more than 200,000 members worldwide. The “experimental” in its name refers to many of the members who’ve built their own planes.

Jack Henderson is president of the club and has been in charge of the fly-in since the early 1990s.

He says the club has 30 active members, while his own family has been involved for three generations including himself, his son John and 21-year-old grandson Marcus.

Ped Abreu organized the cruise-in and proudly displayed his 1931 Chevy coupe — the latest addition to his collection of vintage cars from the ‘30s.

He’s also the drummer in the band Forgiven, which entertained everyone with vintage attractions of its own including “House of the Rising Sun” and “Nights in White Satin.”

The main attraction of the day was parachutist Dr. Dave Newcomer, a 66-year-old general surgeon who has been jumping for 12 years.

Why does he jump? Newcomer says it’s just for fun.

“It’s not so much a thrill as just something enjoyable, like fishing or kayaking,” Newcomer said. However, he’s very aware of the hazards involved,

“It’s the only sport that if you don’t do something perfectly, you kill yourself.”

Newcomer proceeded to jump from a Skyhawk Cessna, piloted by Jack Henderson at a height of 3,000 feet, and landed safely within a few feet of a clearly marked target on the airfield.