Lopatic, 57, of Manheim Township, was arrested on Feb. 3 and has been in federal detention since.

Federal prosecutors charged the former enlisted Marine with repeatedly punching one police officer in the head during the insurrection. They also said he ripped the body camera off a second officer and later threw it away, apparently trying to get rid of evidence.

According to the indictment, Lopatic and two other men, Peter Francis Stager, of Arkansas, and Jeffrey Sabol, of Colorado, interfered with the duties of that second officer, a Metropolitan police officer identified only by his initials, B.M. That resulted in a charge of civil disorder for all three men.

In other court documents, prosecutors accused Stager of beating B.M. with a flagpole and Sabol of taking the officer’s baton from him and holding it across his back while the officer was laying facedown on the ground.

According to federal prosecutors, images from video footage included in the court documents show Stager and Sabol together near B.M. Lopatic does not appear to be in those images.

An image of Lopatic apparently grabbing toward B.M.’s body camera included in Lopatic’s court documents appears to have been taken in a different area o the Capitol grounds than where B.M. was assaulted.

Court filings do not list an attorney for him. 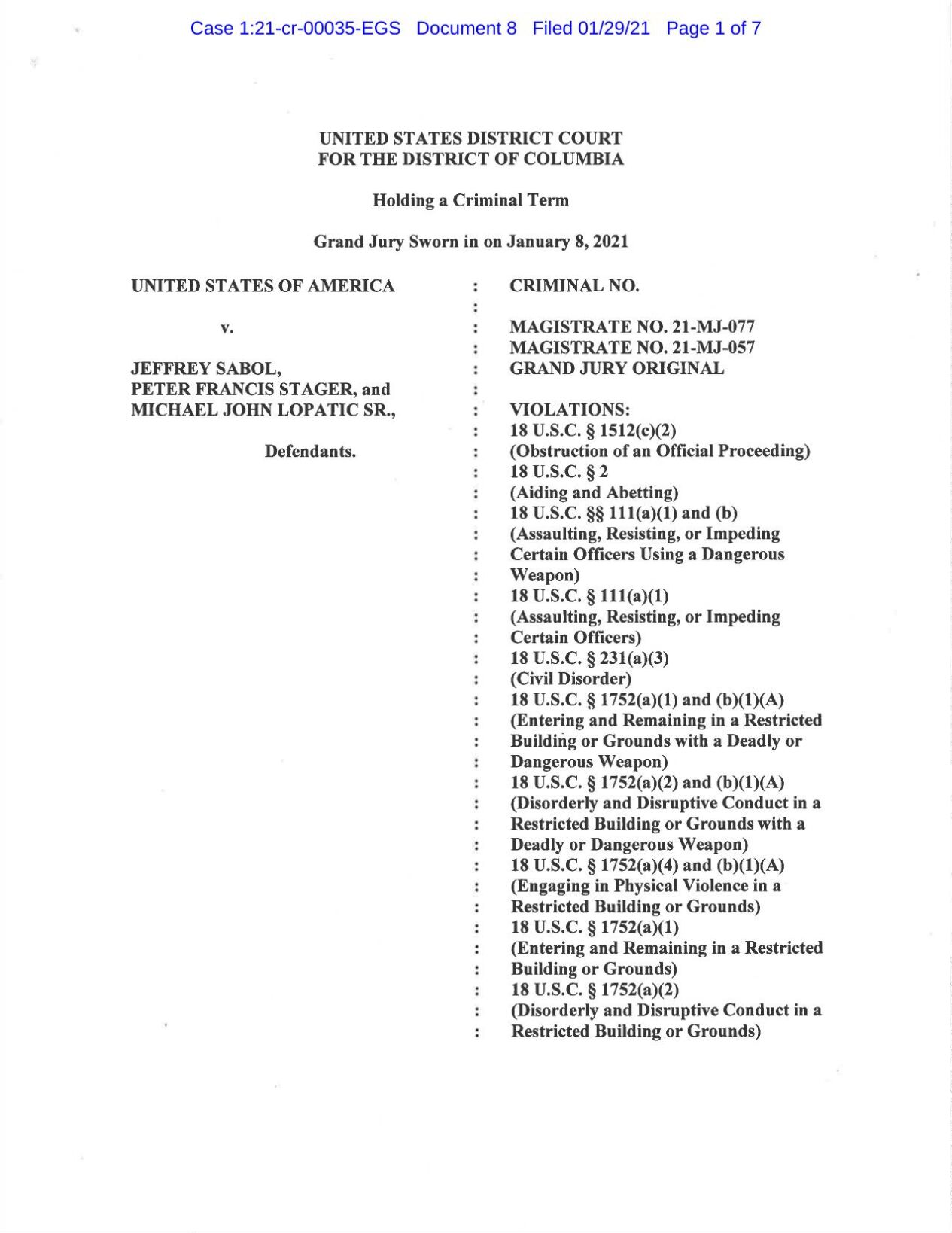 Sullivan had sealed the indictment the same day the grand jury handed it down after finding that Lopatic posed a flight risk and danger if he were to learn authorities planned to arrest him.

Documents were also sealed for the other two men on similar grounds.

Authorities apparently had good reason to believe those who took part in the insurrection might flee: According to Sabol’s court documents, police in New City, New York, stopped Sabol, 51, on Jan. 11 for driving erratically.

They found him  “covered in blood, suffering from severe lacerations to both thighs and arms. ... he made several spontaneous statements to include but not limited to: “I am tired, I am done fighting”, “My wounds are self-inflicted”, I was “fighting tyranny in the DC Capital”, “I am wanted by the FBI,"" the documents said.

He was also found with an airline ticket and passport; prosecutors later said he wanted to flee to Zurich.

Federal prosecutors want the Manheim Township man accused of taking part in the Jan. 6 attack on the U.S. Capitol to remain in jail while he a…

A man who is wanted by the FBI and is shown on video pepper-spraying police and encouraging violence near the U.S. Capitol on Jan. 6 is a staunch Trump supporter from Ephrata, video and still footage shows.

Two very different portraits of a Manheim Township man accused of taking part in the Jan. 6 attack on the U.S. Capitol were presented to a fed…

How a Mount Joy Twp. couple who attended Trump's Jan. 6 'Stop the Steal' rally ended up running for E-town school board

A Mount Joy husband and wife who have falsely claimed the 2020 presidential election was rigged and spread misinformation about COVID-19 are seeking election to offices that could give them a direct role in managing public schools and administering elections.

What is Partnership for Revival, the nonprofit that organized a bus trip to the Jan. 6 Trump rally?

The Manheim Township man accused of taking part in the Jan. 6 attack on the U.S. Capitol was released from detention this week pending trial.

On January 3, somewhere around Quarryville, leaders of “patriotic groups” gathered to plan for then-president Donald Trump’s rally in Washingt…

Manheim Twp. man charged in Capitol riots was there to advance pro-life cause; doesn't believe election was stolen: attorney

While some people who stormed the nation’s Capitol on Jan. 6 did so because they believed the false narrative about a stolen election, that’s …