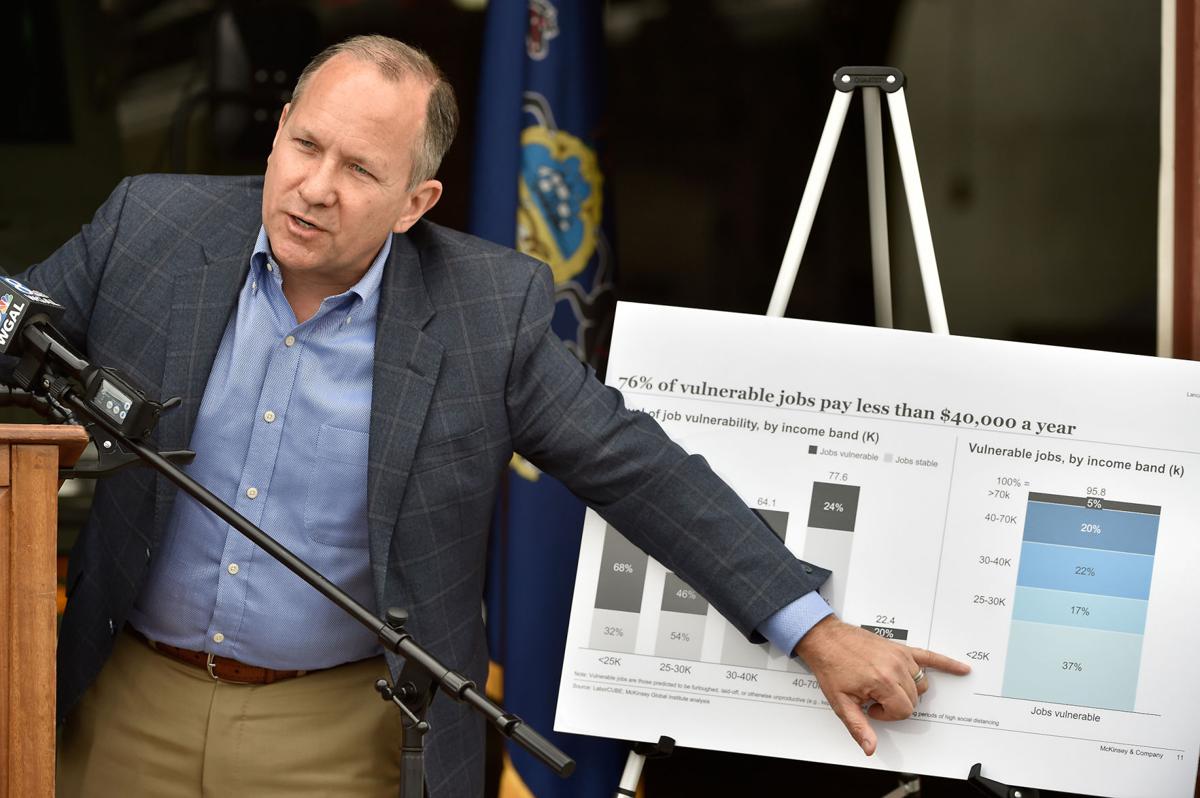 U.S. Rep Lloyd Smucker points to data about vulnerable jobs during the COVID-19 lockdown at a news conference May 14, 2020, at the Lancaster County Public Safety Training Center near Salunga. 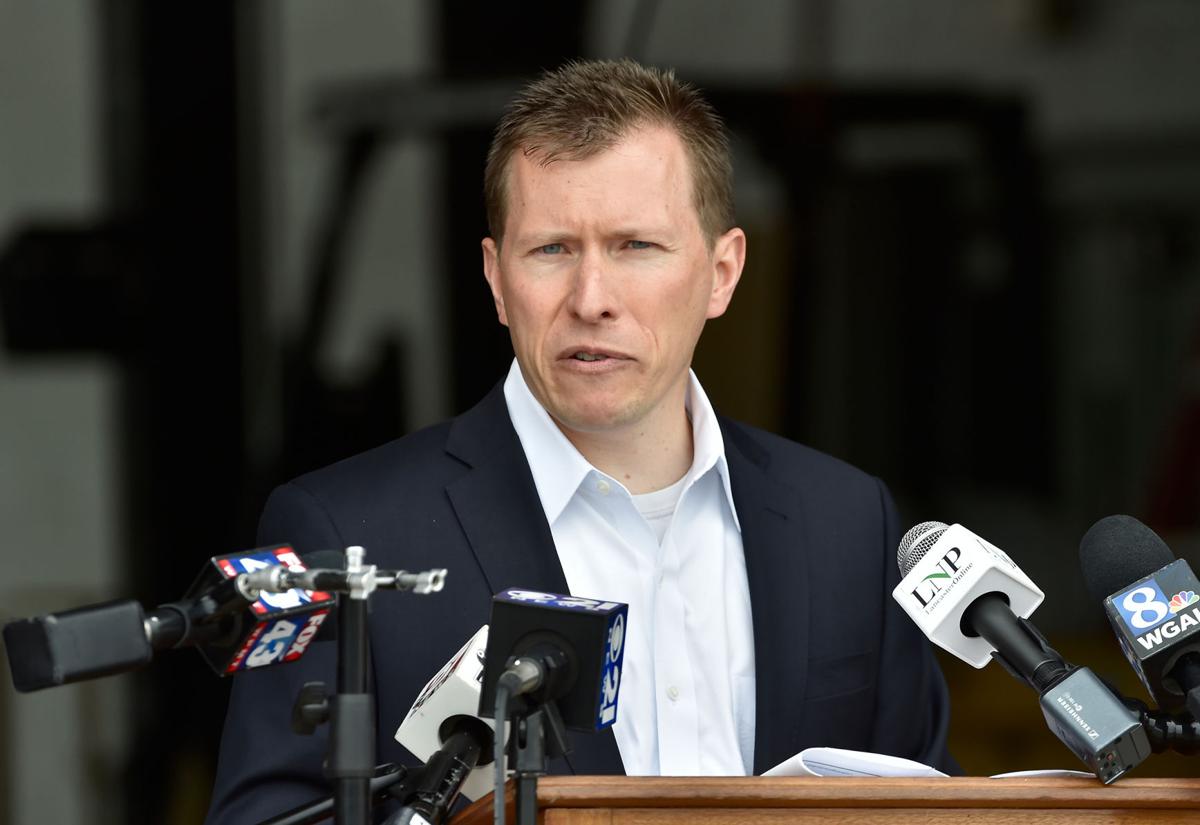 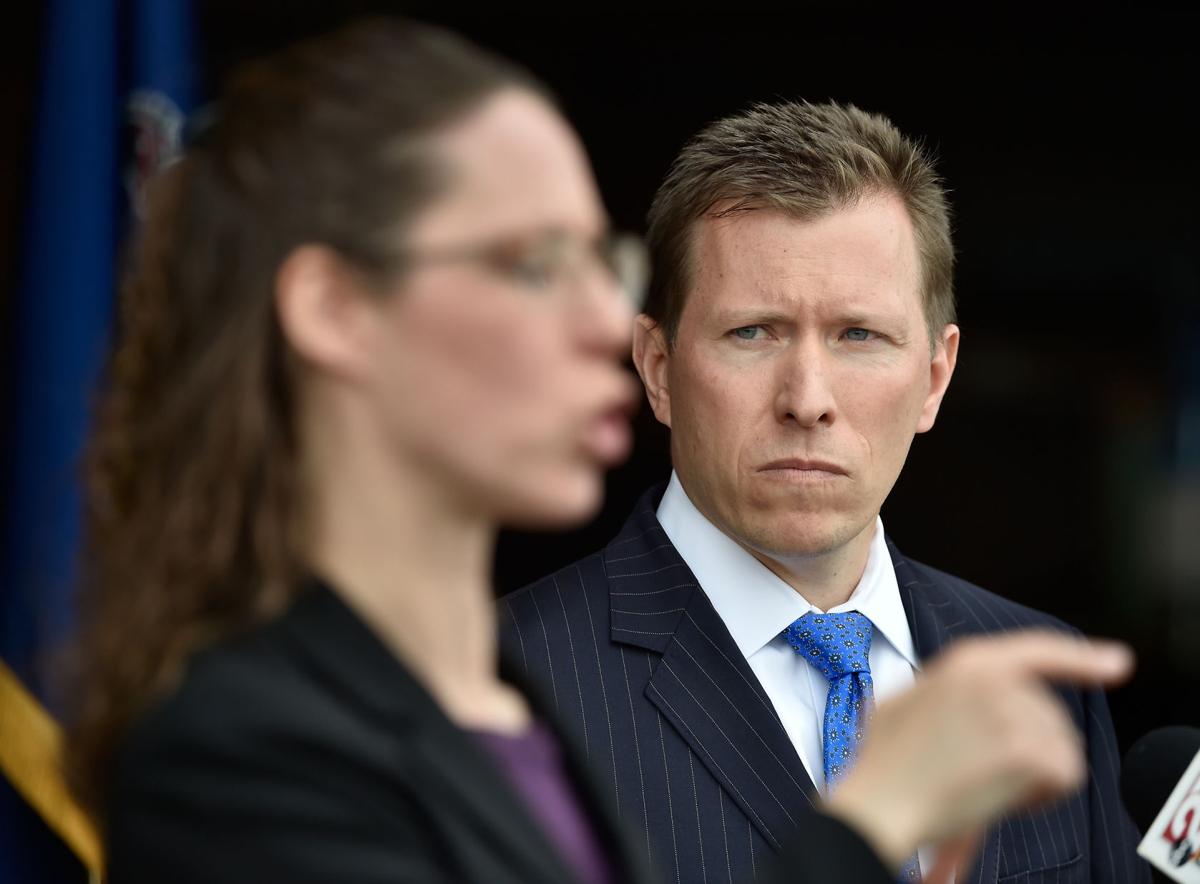 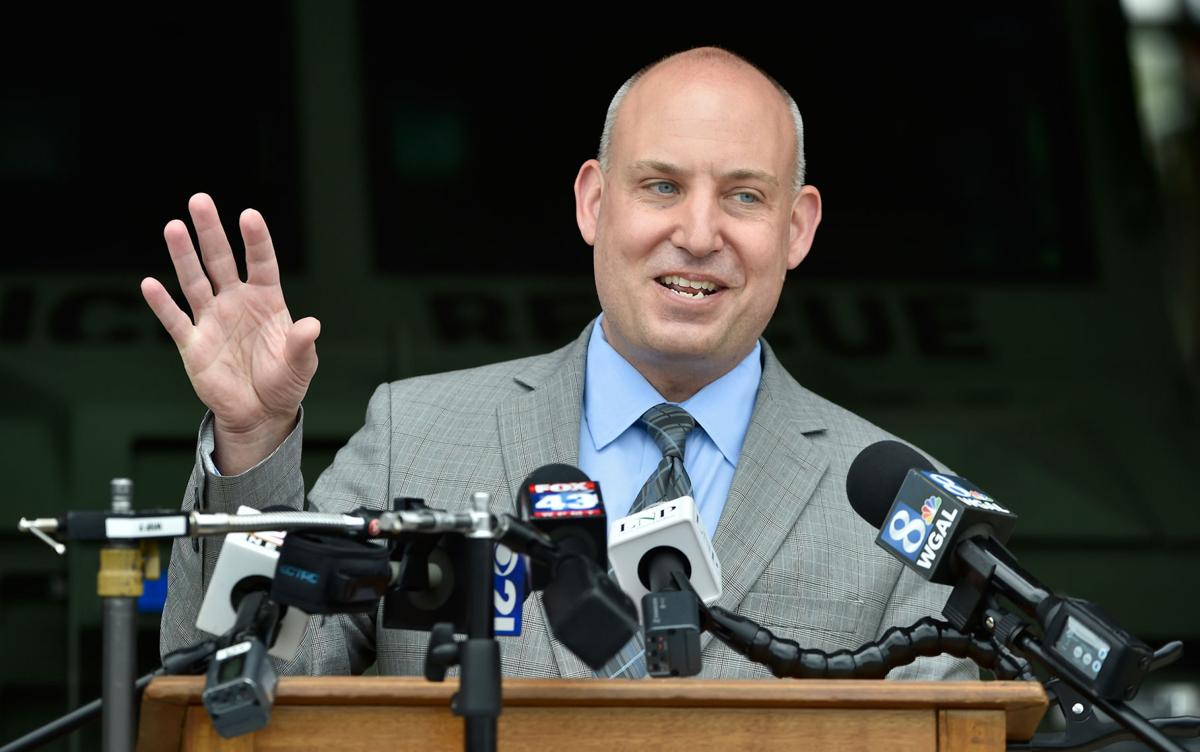 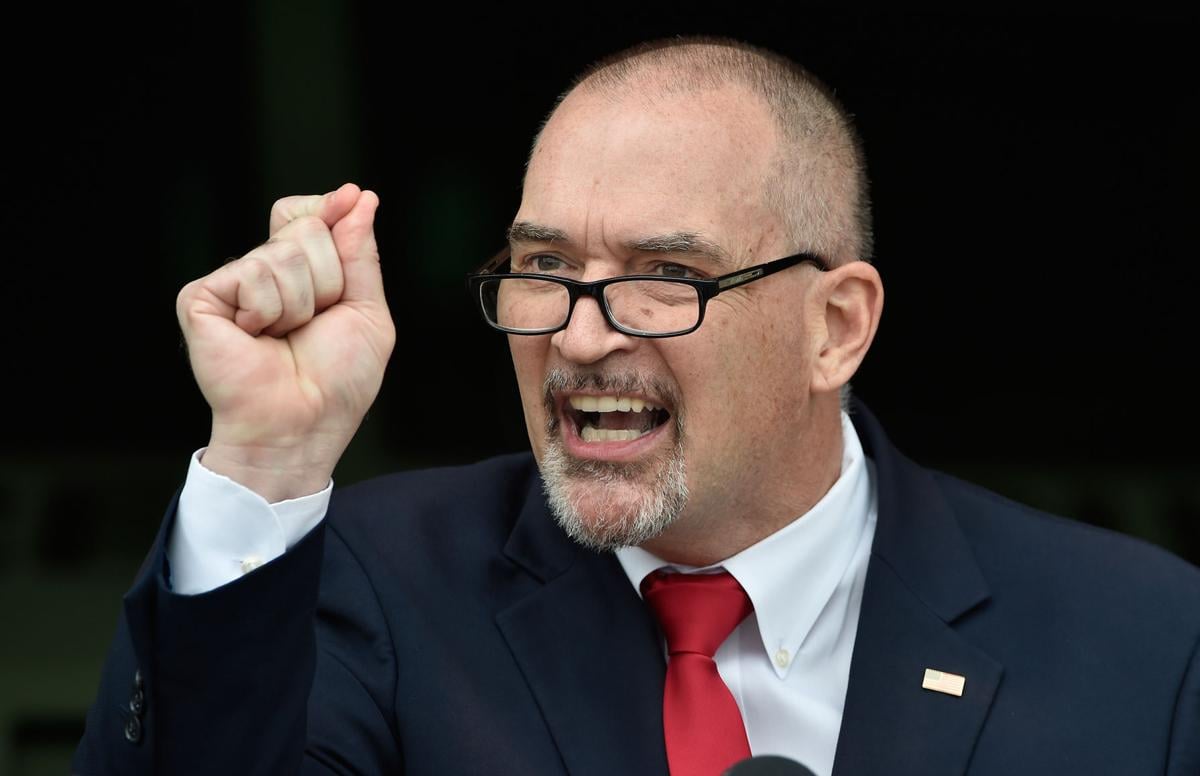 County Commissioner Craig Lehman, a Democrat, railed against partisanship during a news conference on the coronavirus May 14, 2020, at the Lancaster County Public Safety Training Center. 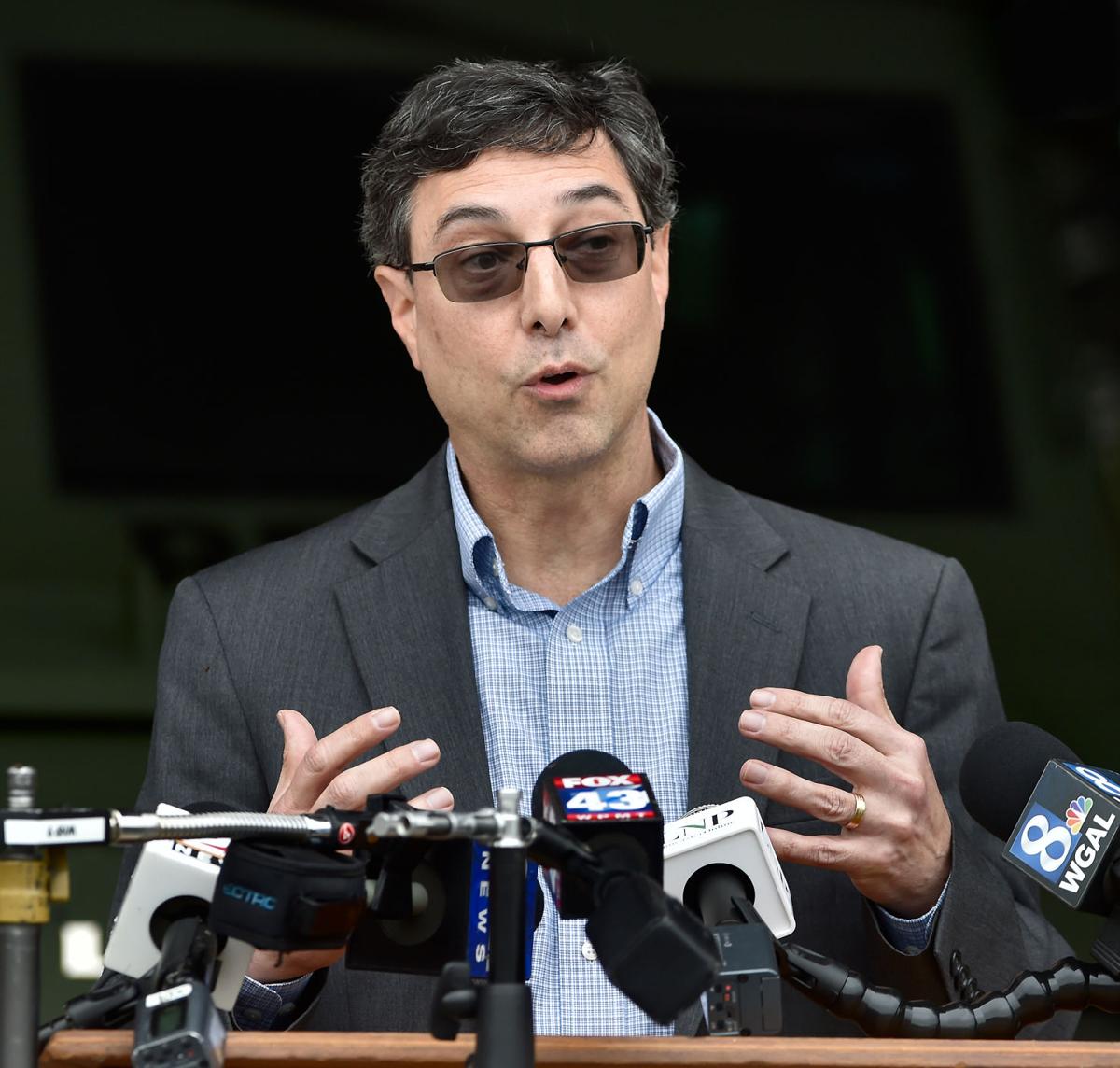 County Commissioner Ray D'Agostino speaks May 14, 2020, during a news conference about the coronavirus pandemic at the Lancaster County Public Safety Training Center.

U.S. Rep Lloyd Smucker points to data about vulnerable jobs during the COVID-19 lockdown at a news conference May 14, 2020, at the Lancaster County Public Safety Training Center near Salunga.

Smucker’s unexpected offer came near the end of a lengthy news conference at which Lancaster County’s lone Democratic commissioner railed at the House member and GOP leaders who want to defy Gov. Tom Wolf and partially reopen the county Friday.

But other Republican leaders at the press event didn’t back Smucker’s surprise suggestion.

Democratic Commissioner Craig Lehman said he’d support reopening as early as next Friday, May 22, if stepped up testing and contact tracing for COVID-19 was in place by then.

“That’s not a bad deal,” Smucker said after Lehman spoke.

The Republican U.S. House member said he values bipartisanship and could support a one-week delay to May 22 if Democrats were on board.

“I’ve been saying for weeks that we should allow businesses to operate if they can do so safely,” Smucker told reporters at the Lancaster County Public Safety Training Center near Salunga. But “I would far prefer that all of the elected officials in Lancaster County come together, both Republican and Democrat, and say that we are ready to open.

“If that date is May 22, and (Lehman) believes that’s the date, I’d be willing to support that,” Smucker said.

But Republican Commissioner Josh Parsons did not back off his assertion that responsible Lancaster County businesses owners who can reopen safely should have the right to do so Friday, defying the governor’s order that non-essential businesses not granted waivers remain closed until at least June 4 to reduce spread of the coronavirus.

“I’m not sure why anyone would think that (the governor) would change his mind” and allow the county to move from the red, or the lockdown phase, to yellow, or partial reopening, as early as May 22, Parsons said.

Before Smucker made his offer, Lehman accused Republican leaders of backing an “illegal” early reopening of the county “because they’re trying to play politics with public safety.”

“Our politics in this country is absolutely, positively broken because we have decided that partisanship, tribalism and toxicity in our politics is more important than doing the right thing,” Lehman said.

Smucker, Parsons and 11 other GOP leaders in Lancaster County signed a letter May 9 calling on Gov. Wolf, a Democrat, to add Lancaster County to the list of 13 other counties he was moving to the yellow phase of reopening on May 15, bringing the total to 27 of the state’s 67 counties.

The Republican leaders criticized Wolf for what they called “unilateral” decision-making and a lack of transparency. They wrote that Lancaster County residents have followed the governor’s shutdown order for weeks, but “that patience is waning.”

Gov. Wolf responded that counties choosing to open ahead of his timeline would be akin to deserters in the war against the coronavirus.

In his initial remarks Thursday, Smucker offered no hint of softening his position.

Using charts, Smucker argued that early projections of severe COVID-19 cases in Lancaster County were way off, that the capacity of hospitals here to treat COVID-19 was never stressed and that lower-wage workers are suffering the most from not being able to work.

Republican Commissioner Ray D’Agostino echoed Smucker’s remarks, saying that the longer the shutdown continues, the more likely the economy will “inch toward a depression destroying businesses and livelihoods.”

D’Agostino highlighted the county’s newly released plan to use $95 million in federal COVID-19 relief funds to ramp up testing and contact tracing, distribute personal protective equipment and help businesses with fewer than 100 workers retrofit facilities to keep workers and the public safe.

The commissioner emphasized that partial reopening Friday does not ease social distancing standards.

D’Agostino also denied that reopening now is partisan, saying Republicans and Democrats have called on the governor for an effective, transparent response to the public health crisis.

'Necessary to act on the will of the people': county GOP officials answer LNP Editorial Board questions on reopening [column]

Editor's note: What follows is the unabridged response from Republican state and county elected officials to questions posed by the LNP | Lanc…

Workers in the construction, hospitality and finance industries continue to bear the brunt of COVID-19’s assault on the local workforce.

What’s the mood of Lancaster County as the ‘reopening’ unfolds? [live updates]

First, I want to thank everyone who has been practicing the proper personal hygiene, social distancing, stay-at-home and mask guidance. I also…

Lancaster Mayor Danene Sorace has been absent from Lancaster County's last two COVID-19 press conferences, and this week says she was not invited.