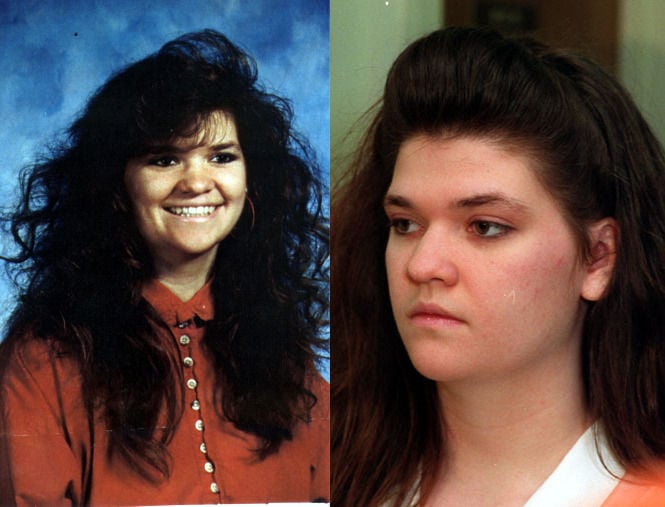 A school photo, left, and a courtroom photo of Tabitha Buck, who was convicted of killing Laurie Show in 1991, when Show was 16 and Buck was 17. Her first name also appears as Tabatha in some documents. 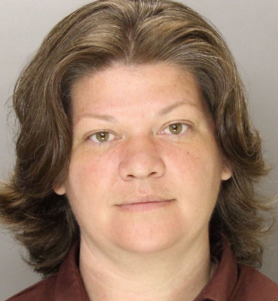 Tabitha Buck, seen in a prison photo from 2015. Her first name also appears as Tabatha in some documents. 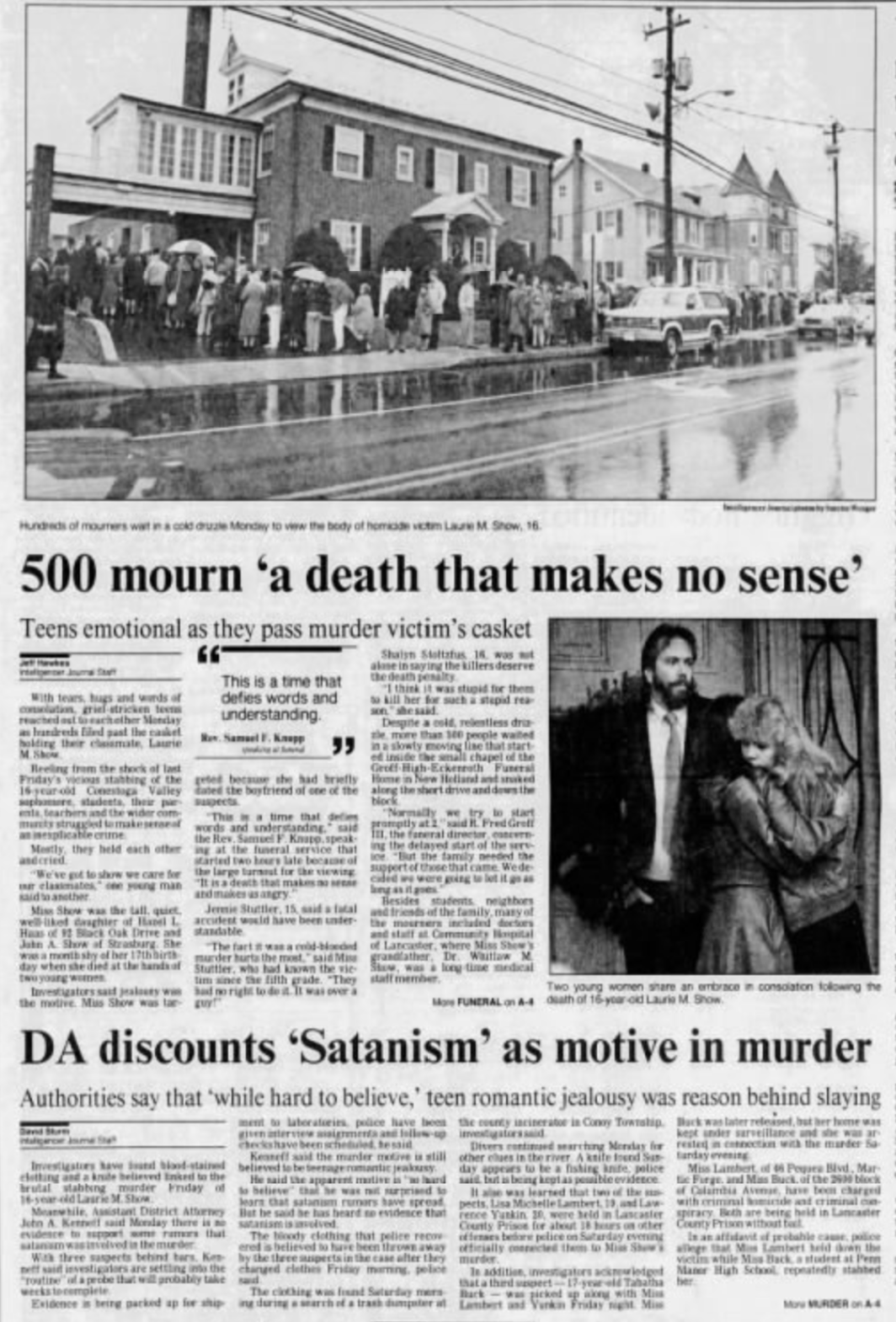 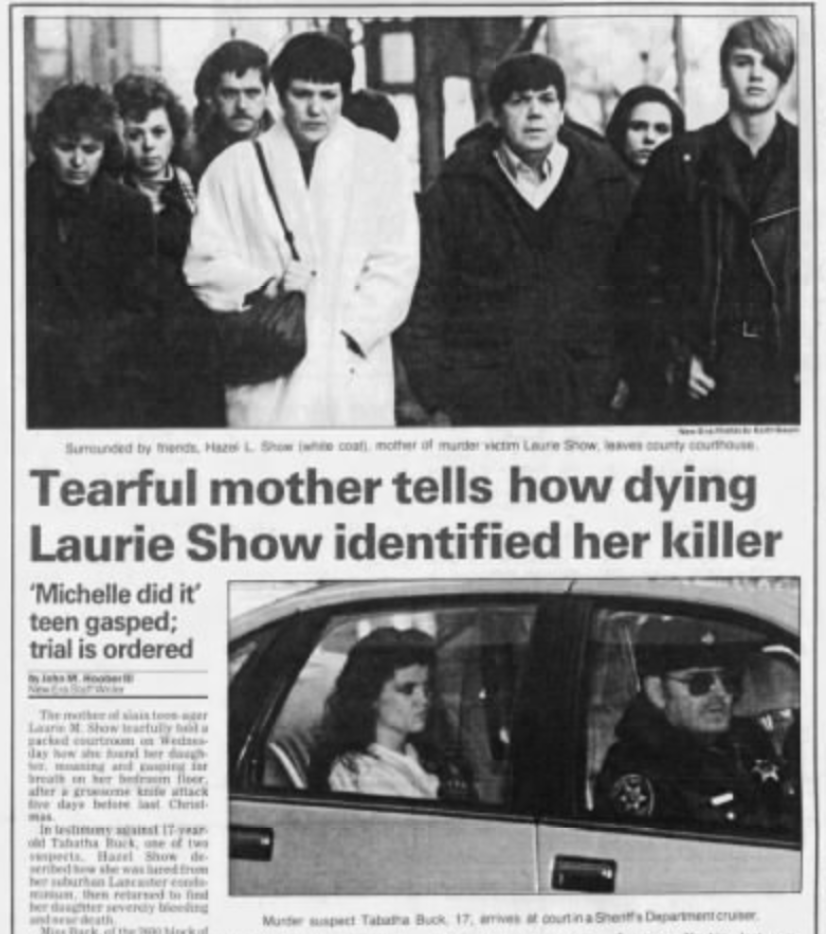 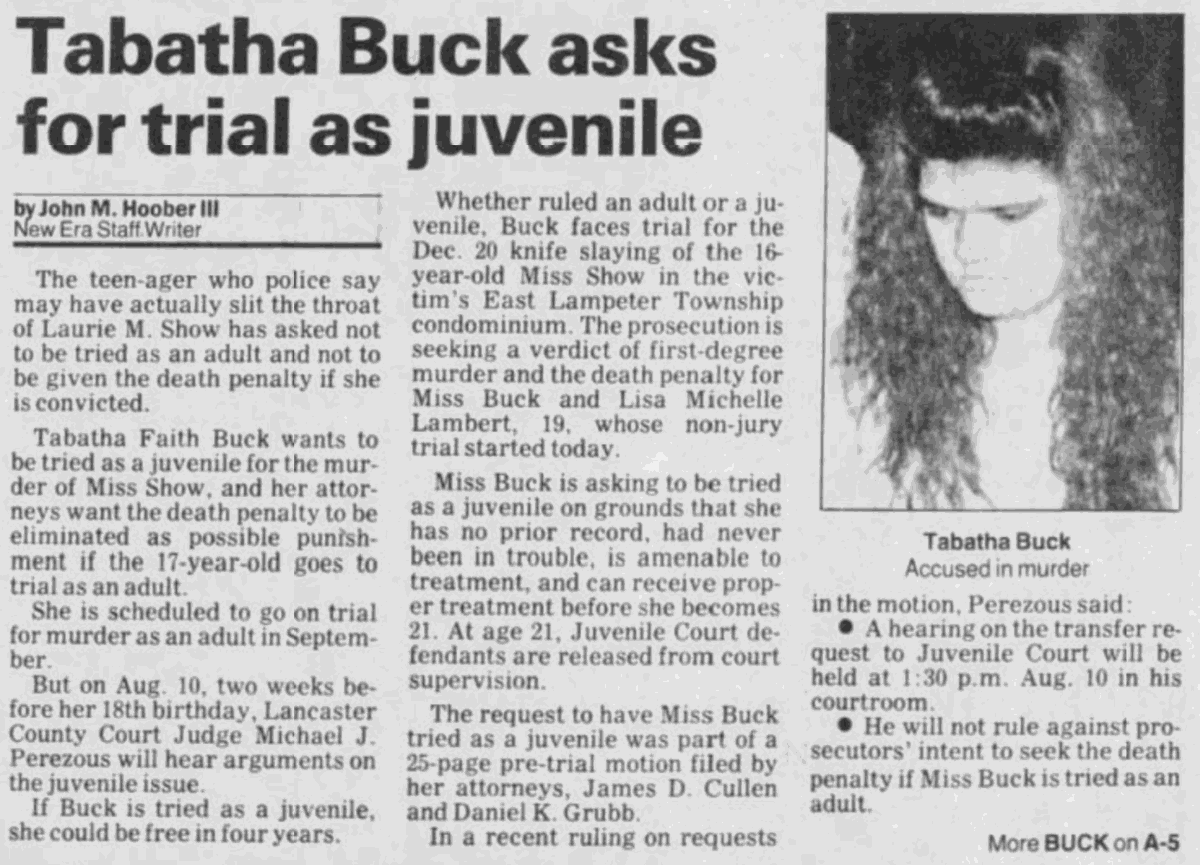 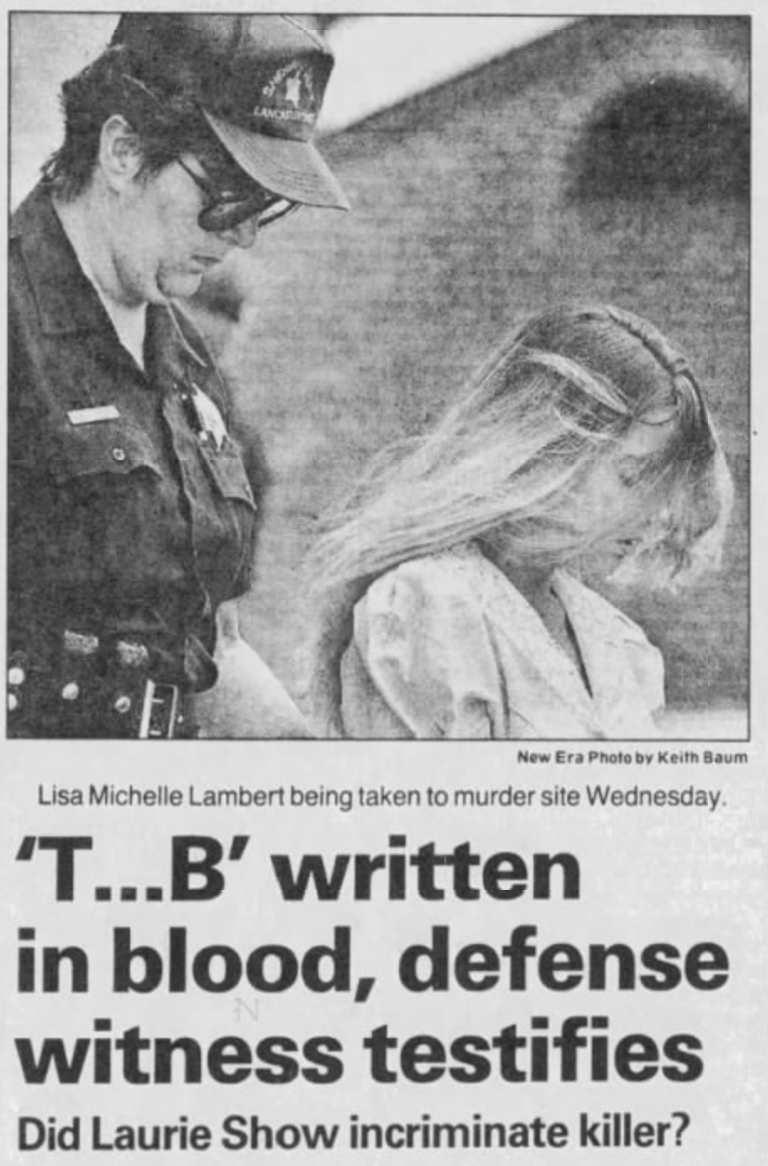 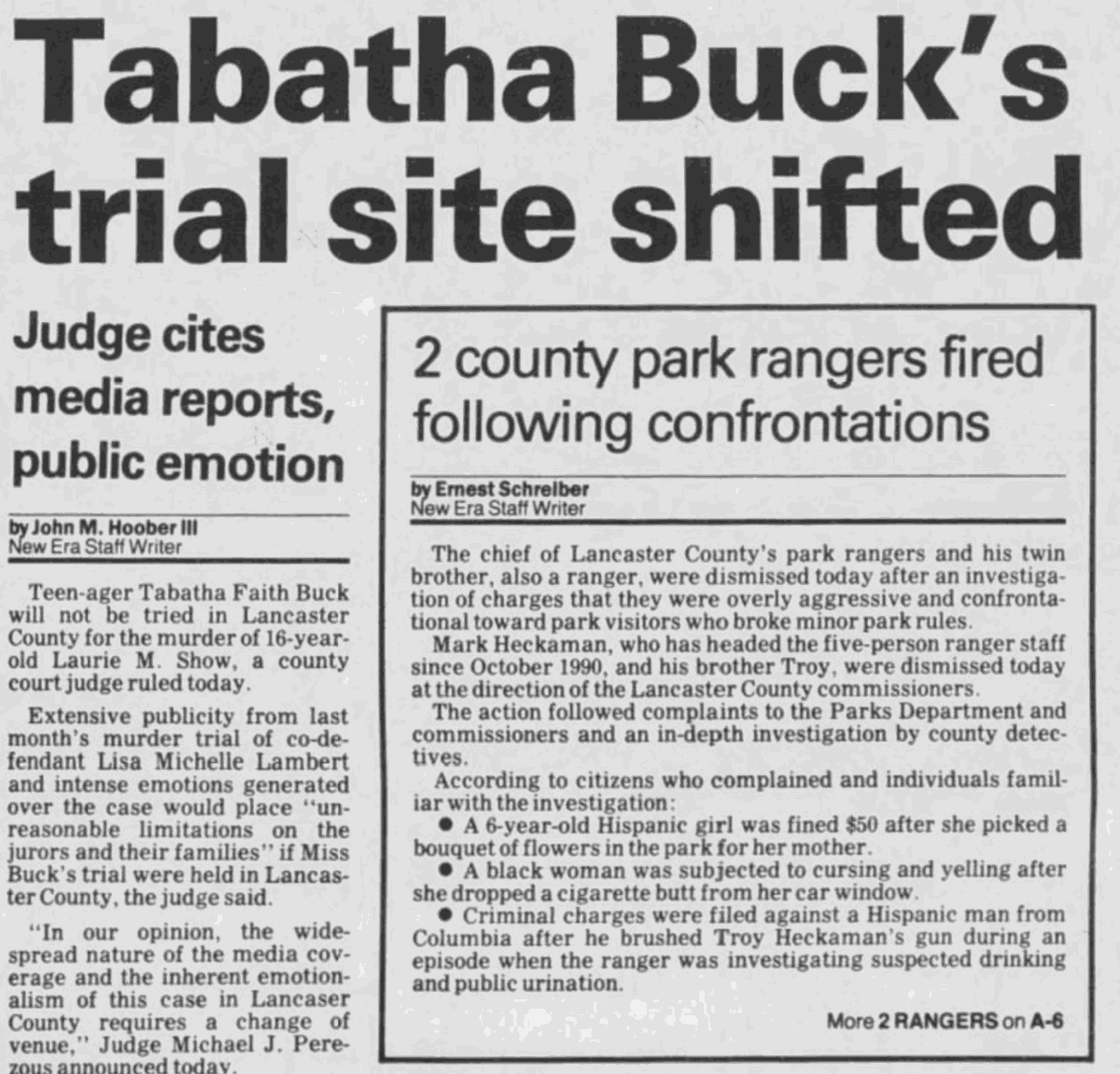 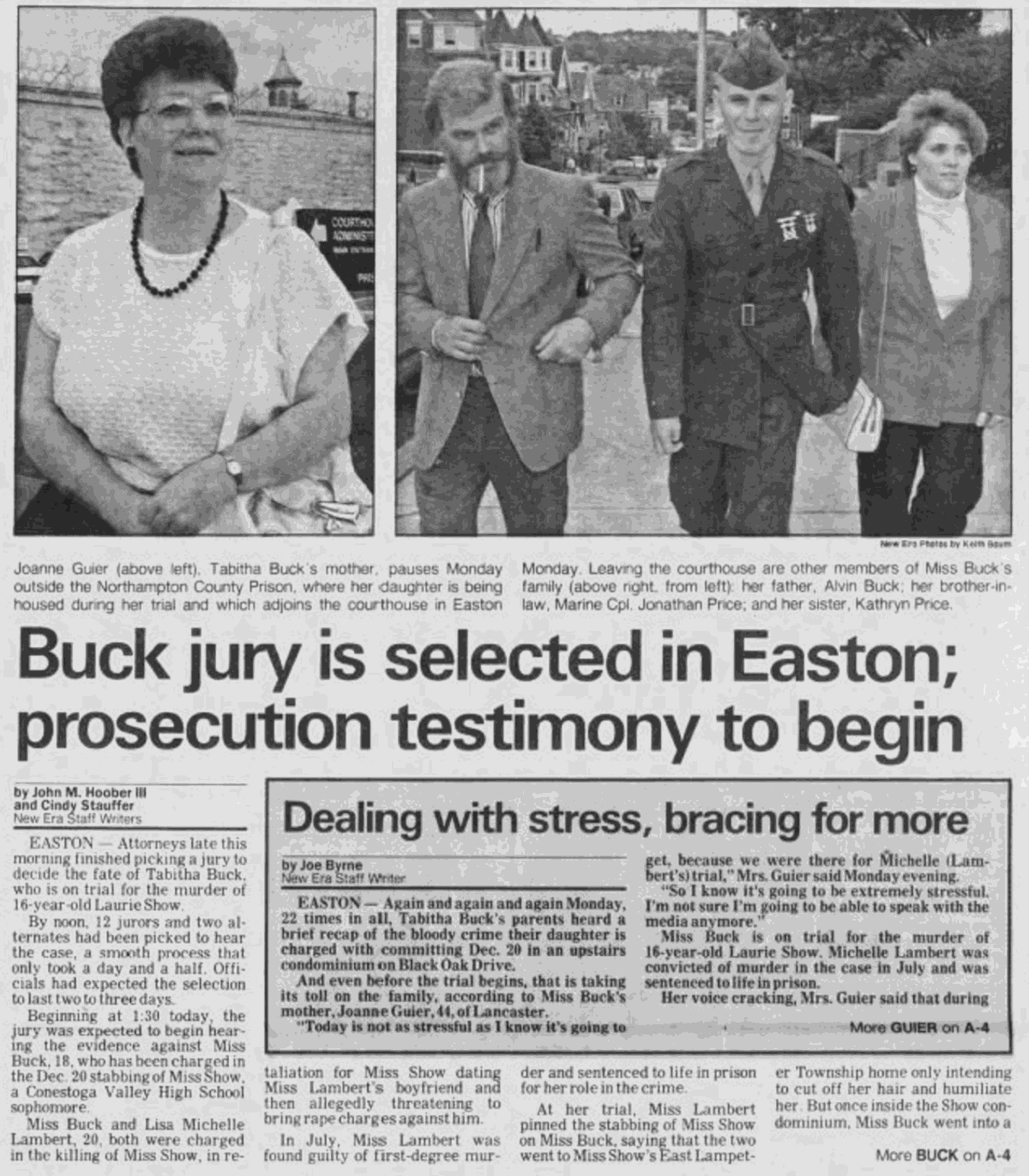 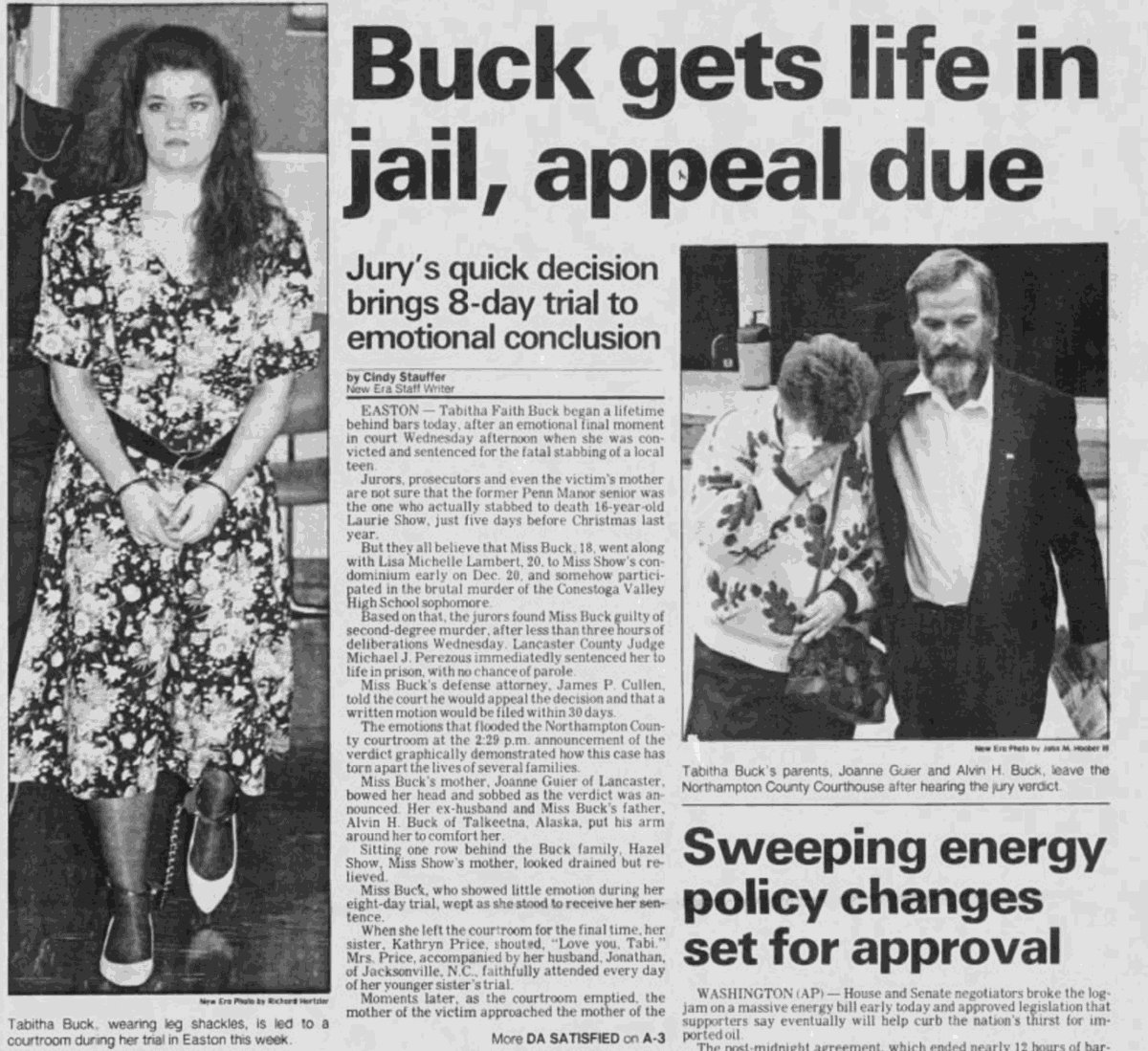 A school photo, left, and a courtroom photo of Tabitha Buck, who was convicted of killing Laurie Show in 1991, when Show was 16 and Buck was 17. Her first name also appears as Tabatha in some documents.

Tabitha Buck, seen in a prison photo from 2015. Her first name also appears as Tabatha in some documents.

The murder of Conestoga Valley high school student Laurie Show - and the subsequent arrest, trial and appeals of the three young people charged in relation to the killing - dominated Lancaster newspaper headlines off and on throughout the 1990s.

The case resulted in national coverage as well, and several TV shows dealt with it over the years.

As Tabitha Buck - whose name has also been spelled in documents since her arrest as Tabatha Buck is set for possible parole this month, here's a look at how her case was covered locally at the time.

Just days before Christmas, 16-year-old Laurie Show was stabbed repeatedly in the East Lampeter Township condominium in which she lived with her mother. Initial reports about the suspects were vague, and the first edition story mistakenly listed Show's age as 17, but a clear picture of who the suspects were and how they were connected with Show would soon emerge.

On Dec. 21, 1991, Lisa Michelle Lambert, Tabitha Buck and Lawrence Yunkin were charged in connection with the murder of Laurie Show. As this story from Dec. 23 indicates, people who knew the victim and the suspects said they were unsurprised by the charges.

Hundreds of people turned out on a rainy December morning to pay their last respects to the slain teenager. This front page tells the emotional story. It also contains a very period-specific side note: Because of the "Satanic panic" that had dominated national headlines throughout the 1980s and into the early 1990s, officials had to act quickly to quell rumors of a Satanic connection to the Show murder, stating that teen romantic jealousy was the most likely motive.

As Lambert, Buck and Yunkin were ordered to stand trial, Laurie Show's mother, Hazel Show, testified to a packed courtroom that her daughter's dying words identified "Michelle" as her killer.

Lancaster County prosecutors announced they were seeking the death penalty against Buck and Lambert. Yunkin was facing lesser charges, as he was suspected to have played a more minor role in the killing, and because he was cooperating with investigators. Both Lambert and Buck pleaded not guilty on March 25, 1992.

As the high-profile trial of Lisa Michelle Lambert got under way, Tabitha Buck asked to be tried as a juvenile. This request, if granted, would not only take the death penalty off the table, but would raise the possibility of her going free in as little as four years.

In court testimony during her trial, Lambert placed all of the blame for the brutal stabbing of Laurie Show on Buck, claiming that she only watched as her friend murdered Show.

During the trial of Lisa Michelle Lambert, a witness for the defense testified that there was evidence at the crime scene to indicate that Laurie Show had written the initials "T B" in her own blood. This testimony stood in contrast to Hazel Show's testimony that her daughter had implicated Lambert with her dying breaths.

In exchange for giving up her request to be tried as a juvenile, prosecutors dropped their death penalty threat against Buck. Among the reasons for the decision, prosecutor John Kenneff listed the fact that Lambert, purported by prosecutors to be the mastermind of the murder, was given a life sentence on July 20, 1992.

Citing intense media coverage and strong public emotions around the case, Judge Michael J. Perezous agreed to move Buck's trial out of the county in an effort to give her a fair hearing. The state Supreme Court would eventually relocate the trial to Easton.

Ten months after Laurie Show was murdered, Buck's trial began in Easton. As this report indicates, jury selection went much more quickly than anticipated - as would the entire trial.

Just over a week after it began, Buck's trial was over - she had been found guilty of second-degree murder, and was sentenced to life in prison. Just a few weeks later, Buck began appealing her case - a process that continued over the next three years. All of her appeals were denied.

Below is a collection of 19 stories covering court hearings, appeals and more from the Lisa Michelle Lambert and Tabitha Buck slaying of Laurie Show.

Note: These stories date back to 2002 when stories were first added to LancasterOnline's website.

A loss for Lambert, but another appeal is likely

In a 109-page opinion, U.S. District Judge Anita Brody dismissed Lambert's claims that prosecutors framed her for the murder.

Prosecutors have say in Lambert case

But her decision to allow Lambert to continue to appeal that conviction was wrong, the prosecutor also said.

Lawrence S. Yunkin has been paroled from prison after serving nearly 12 years for his role in the 1991 murder of 16-year-old Laurie Show.

Today, nine months after attorneys for both sides argued Lamberts case before three federal judges in the U.S. Court of Appeals for the 3rd C…

The only avenue left to her now is the U.S. Supreme Court.

After years of fighting her conviction for murdering 16-year-old Laurie Show, Lambert has appealed to the U.S. Supreme Court.

At least one U.S. Supreme Court justice recently asked prosecutors to spell out exactly why the court should not hear Lamberts appeal of her …

Lisa Michelle Lambert's roller coaster ride through the legal system is finally over.

Lambert sex case back in court

Lisa Michelle Lambert has returned to the court system, a place where she spent years appealing her conviction in the 1991 murder of 16-year-o…

From the 2012 archives: Lambert loses latest appeal of 1992 murder conviction

The latest in a long list of appeals filed by convicted teen killer Lisa Michelle Lambert was denied this week by the state Superior Court.

Lisa Michelle Lambert, now 40, is serving life in prison for the 1991 murder of Laurie Show in East Lampeter Township.

Lisa Michelle Lambert, serving a life sentence for the 1991 murder of romantic rival Laurie Show, has painted herself as a victim of ruthless …

Tabatha Buck, serving a life sentence for Laurie Show's murder in 1992, will be resentenced Monday

Tabatha Buck, who is serving a life sentence for her role in Laurie Show’s murder in 1991, will learn Monday if a Lancaster County judge will …

'Snake in the grass': Tabatha Buck, who helped kill Laurie Show in 1991, could walk free in 2 years after resentencing

In the quarter century since Tabatha Buck helped Lisa Michelle Lambert kill 16-year-old Laurie Show over a man, Buck has spent her time in pri…

Tabitha Buck, who helped kill Laurie Show in 1991, could be out of prison by Christmas

Air traffic is down, gun seizures up at US airports

Here are the conditions under which Tabitha Buck could be paroled

After almost 28 years in prison for participating in the 1991 killing of Laurie Show, Tabitha Buck could be released on parole by Christmas.

Tabitha Buck, who helped kill Laurie Show in 1991, has been released from prison

In 1992, all eyes were on court proceedings in the Laurie Show murder case [historic front page]