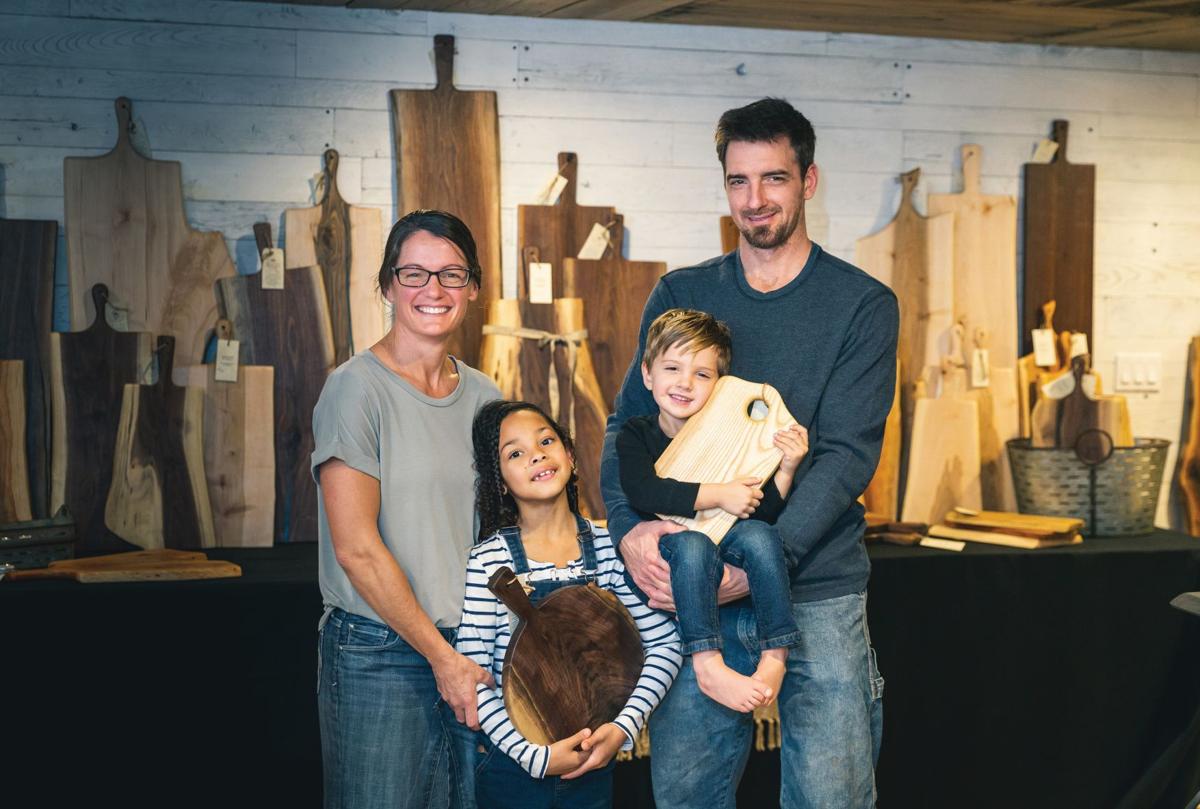 John and Rosie Stoltzfus and their children, Angelina and Brycen. 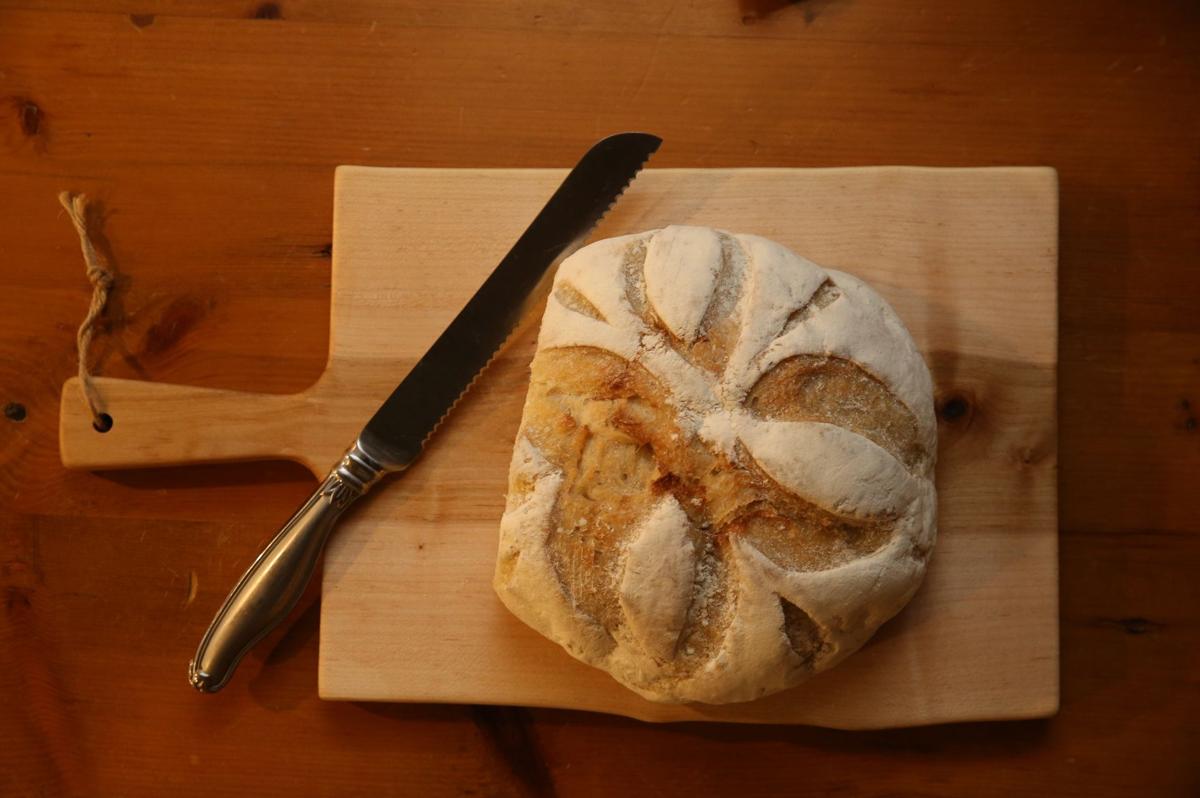 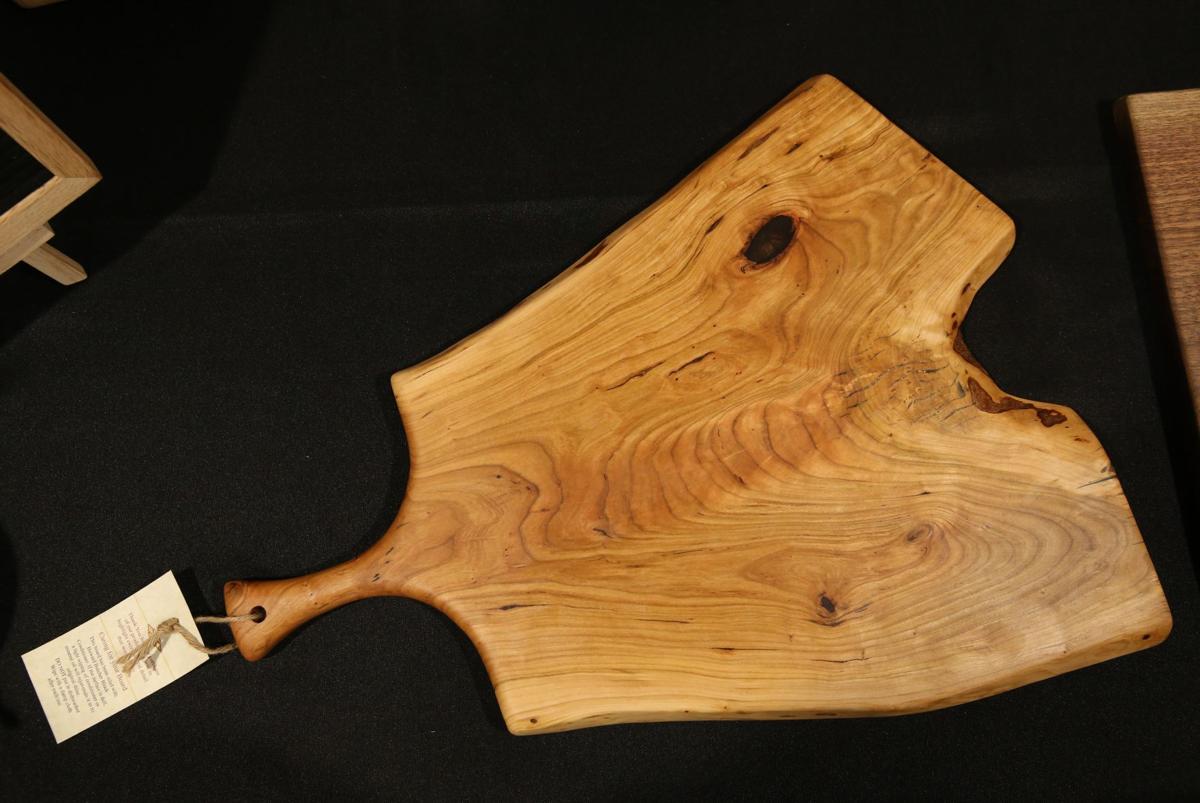 From the spring 2020 edition of Balance magazine.

Not just any wood, but rejected wood – a tree trimmer’s trash. The uglier the better.

John’s wife, Rosie, who admittedly hates messes, used to lament his “hobby,” especially when the logs from fallen trees started piling up in the driveway of their New Holland home. Then, shortly before Christmas 2018, Rosie asked John to make a few little cutting boards that she could give as gifts.

With a homemade jigsaw and an eye for the beauty within, John started carving his own niche out of all that unwanted wood.

What started out as a few cutting boards turned into a business: RJ Stoltz Co. Marketing on Instagram, by word of mouth and at local makers’ markets, they’ve found a growing demand for John’s handiwork. In the last quarter of 2019, he made between 400 and 500 boards – everything from simple 8- or 9-inch cutting boards to asymmetrical live-edge charcuterie boards several feet in length. Rosie finishes off each of John’s raw wood creations with a butcher block conditioner made from mineral oil and beeswax to create a functional piece of art.

“I think what sets us apart … we keep the live edge,” says Rosie, 39, referring to a technique where the craftsman preserves the natural edge of the wood, flaws and all. “That makes it unique. There’s no two pieces that are the same.”

John’s main mediums are maple, walnut and cherry, but he occasionally makes pieces from sassafras and mulberry as well.

“Every species has its unique character,” says John, 35, noting he’s always been partial to the colors of walnut. “When I discovered maple that had a dark streak in the middle I was blown away.”

John’s love affair with wood began in childhood, growing up on the family farm. His father had a metalworking shop, but his grandfather did woodworking. “My earliest memories were bringing home scraps and nailing them together,” he says.

John and Rosie grew up Amish and lived about a mile apart in the New Holland area, attending separate one-room schoolhouses. Ironically, they met through John’s cousin while both were living in Florida. The couple, who are no longer Amish, married 11 years ago and returned home, where John started looking for tools on Craigslist and eBay – and collecting trees.

His woodwork isn’t limited to cutting boards. He also does subcontracting work, rehabbing houses and refinishing wood floors. He’s made furniture, too, include a river-style conference table for a local business created by joining two live-edge wood slabs with a “river” of blue epoxy down the center. John frequently uses epoxy resin, either clear or colored, to fill holes, cracks and knots in his cutting boards. The epoxy cures and hardens, forming a clear glass-like or tinted surface that adds beauty to the wood’s natural imperfections. The epoxy, he says, is the most time-consuming part of the board-making process, along with detailing the uniquely carved handles.

John’s workshop behind the family home is a happy clutter of sawdust, tools and boards in various stages of completion. It’s also a welcoming place for his young helpers, daughter Angelina, 8, and son Brycen, 3, along with the family’s three old English bulldogs. Angelina has been part of the family, in and out of the couple’s protective care, since age 1. When it became clear she would not be able to live permanently with a biological parent, John and Rosie made it official and adopted her last summer.

Angelina’s wooden creations already decorate her father’s workshop, including a hand-drawn wooden sign covered in hearts that proclaims, “You are the best dad ever!”

“I want to be an artist when I grow up,” she says with a beaming smile.

Whether the children follow in his footsteps remains to be seen. John recalls how his own father had hoped he would take over the family farm or the metalworking business. But carving out his own niche in the world was not so different from finding the beauty in those pieces of reclaimed wood.

“I knew the character it was hiding,” he says. “Ultimately, I’m just unleashing its own potential.”

Cooking with beans 101: A kitchen staple for shutdown days and beyond (recipes)

Amid nationwide shortage of masks, Amish are sewing 13,000 to donate in Lancaster County

Couple finds way to preserve this Lancaster County one-room schoolhouse and live in it, too [photos]

Want to redecorate or remodel? Check out these 28 tips from Lancaster County home design experts

We’re all spending more time at home these days. And we’ve all had a lot more time to stare at our living space and ponder what we’d like to c…