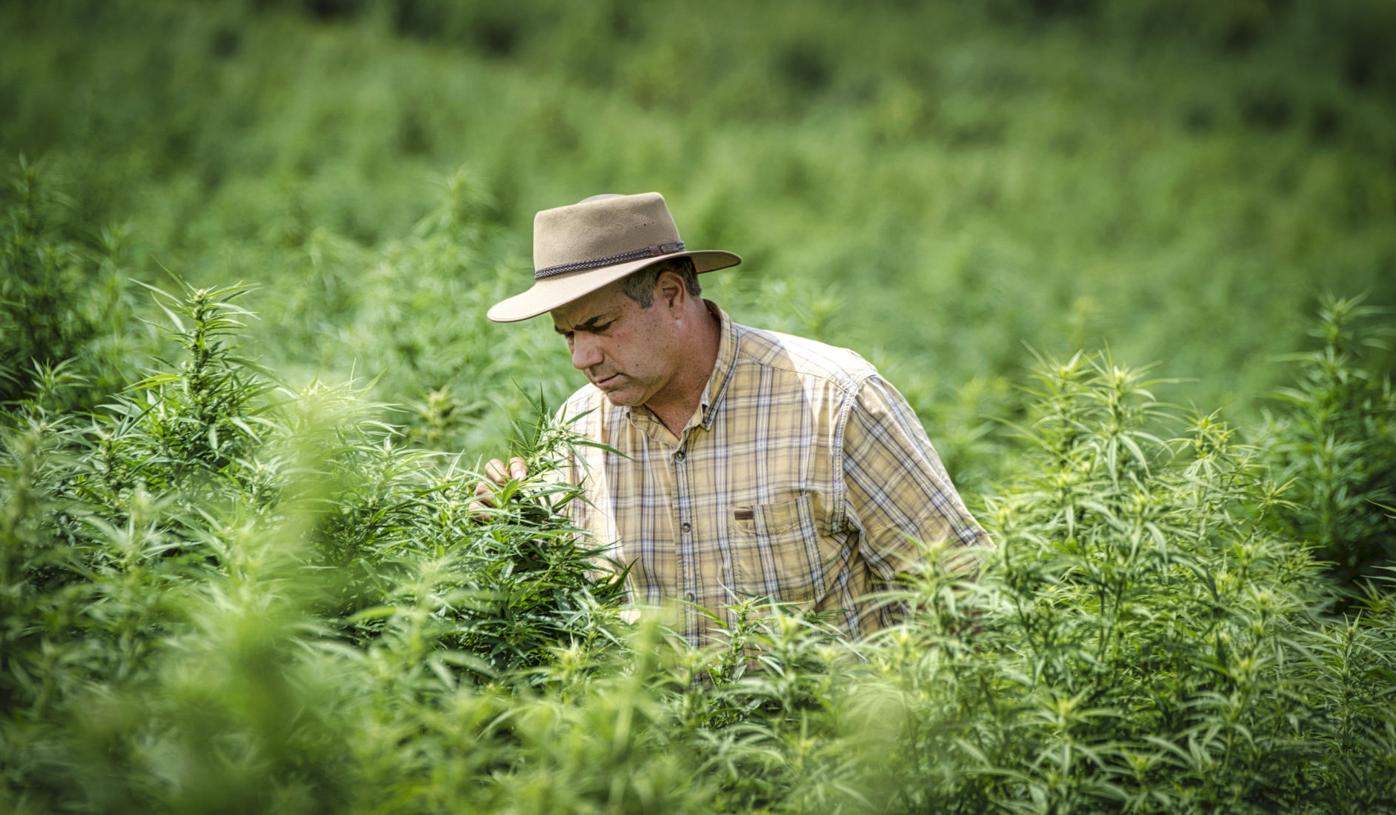 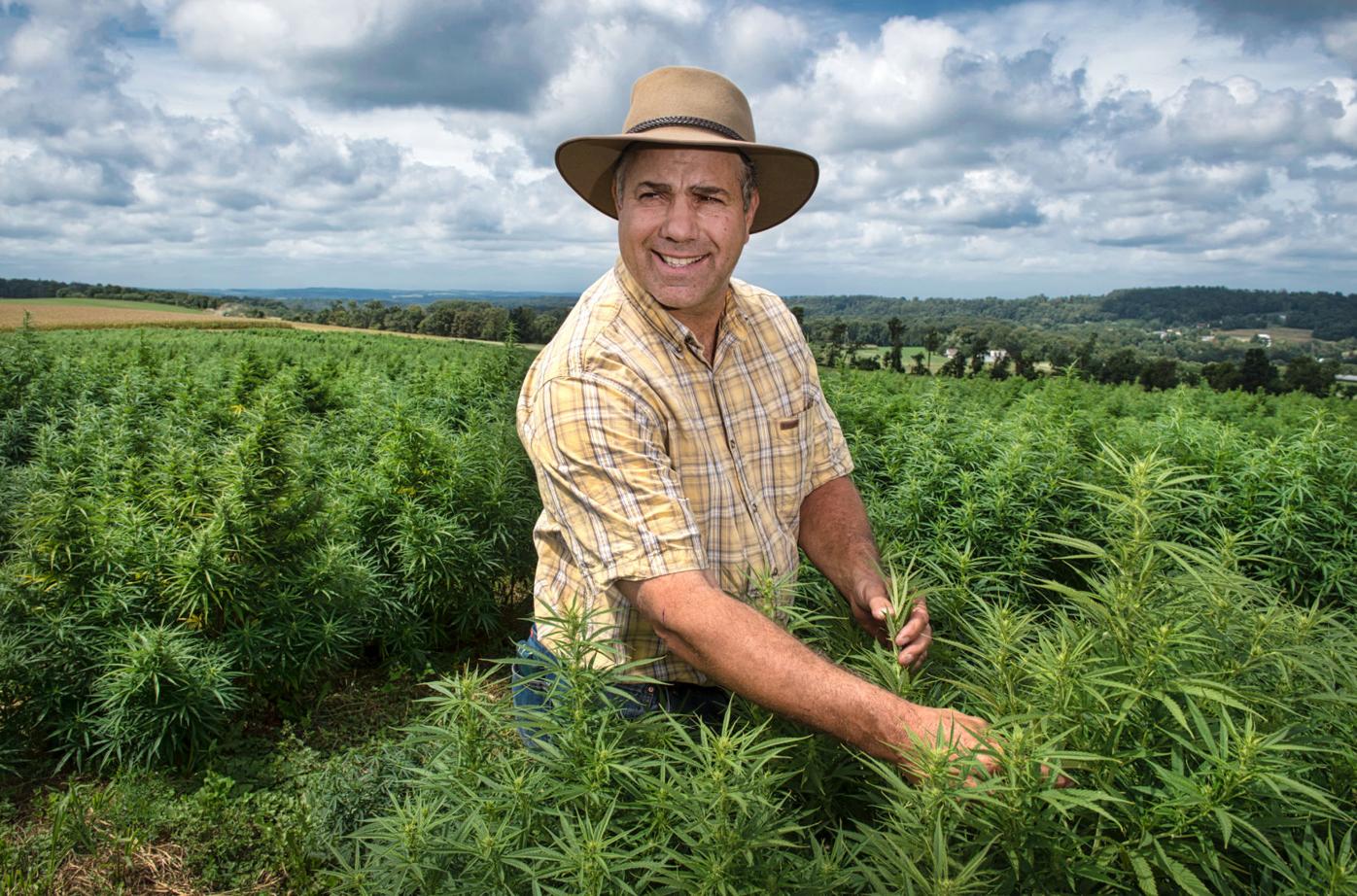 These are nervous times for some local farmers, as the state’s first large-scale hemp crop in eight decades approaches harvest season amid ongoing regulatory and market questions.

Hemp has to pass a THC test before it can be sold. It has to be dried quickly so it doesn’t mold. And supply-demand and pricing questions loom large.

But hopes are high that hemp will prove a lucrative new crop for farmers hit hard by falling dairy prices and other economic challenges.

"This is not for the faint of heart," said Holtwood farmer Steve Groff, who said he's probably one of the largest hemp farmers in the state this year with 70 acres planted for CBD, which is in high demand for its reputed health benefits. "The analogy I've been using is, the airplane has taken off and we're still building it."

Groff plans to begin harvesting his crop in a couple of weeks, and his hemp will be a key focus of an annual field day event he is holding today at his farm.

Earlier this month, the THC and drying issues got a lot of attention at a Hemp Research Field Day at Penn State University Extension’s research center in Rapho Township.

A good chunk of the overflow crowd of about 400 raised their hands to indicate they were growing hemp. On a question of how many had plans in place to dry their crop, many fewer hands went up.

“Many growers embarked on this crop without a clear plan for harvesting, post-harvest handling, or a contract with any buyer or processor,” research center director Alyssa A. Collins said in an email.

“Now all of these folks are seeking the same services and answers at the same time,” she wrote. “If the hemp-processing infrastructure doesn't materialize quickly enough this fall, a lot of growers may be left holding the bag.”

Some hemp harvesting has started and it is expected to peak in September and continue through October or maybe even November, according to extension educators.

Though some Pennsylvania hemp is being grown for the fiber and seed the crop was traditionally used for, many of the local locations are small plots being grown for cannabidiol, a compound known as CBD.

CBD has drawn intense consumer interest, even as federal regulators signal concern about widespread use without further testing.

Federal law draws the line between hemp and its cousin marijuana by level of THC, the psychoactive substance that’s much higher in the marijuana.

Research that the potency-monitoring program at the University of Mississippi published earlier this year shows the average THC content of marijuana almost doubled in the last decade, and stood at about 17% in 2017.

Hemp, meanwhile, has to test below 0.3% THC, and high-CBD plants are likely to be at or over the line at full maturity depending on testing protocols and weather conditions, said Erica Stark, executive director of the Pennsylvania Hemp Industry Council.

Excessive conditions, such as drought, have potential to stress plants and make THC spike a bit, she said.

“Up until this year nobody was really growing high-CBD genetics,” Stark said, calling the issue “definitely concerning.”

As federal regulators look at clarifying requirements for the timing and methods of testing, Stark is among the advocates urging them to do so in a way that provides a little “breathing space” for farmers to keep them from suffering a “devastating loss.”

For now, she recommends that farmers have plants tested frequently for THC by sending samples to a lab — and consider harvesting early even though they’ll get less money for lower CBD levels.

Groff said it sounds like the Pennsylvania Department of Agriculture wants to work with farmers on the THC testing issue, and he’s comforted by that and the fact that his hemp is testing under the thresholds.

But, he said, there are still a lot of unknowns, like weather, that could affect THC levels. Ultimately, he said, “We’re going to have to work it out.”

William Nichols, a spokesman for the Pennsylvania Department of Agriculture, said in an email that if the state’s first official test of a farmer’s crop comes in over the federally mandated threshold, a second test can be taken. If the second test is over the limit, “the department will discuss destruction options with the permit holder.”

Testing has just started and no Pennsylvania hemp has had to be destroyed so far this year, according to the department.

The Associated Press reported Tuesday that more than half of the hemp in Hawaii had to be destroyed because of THC levels that were too high. It quoted a state official who noted that Hawaii has a “really unique climate.”

The story also said the Hawaii Department of Agriculture granted waivers to a few crops “that tested slightly above the limit, allowing the plants to be used as hemp.”

Jake Sitler, director of business for the CBD company Floyd’s of Leadville, said many local farmers have experience with hanging tobacco in barns to dry, but hemp is very different.

While tobacco’s big open leaf can handle the humidity fluctuations here, he said, hemp grown for CBD is “a small compact flower that is wet on the inside too,” harder to dry and more susceptible to mold.

Sitler said Floyd’s — which was founded in Leadville, Colorado, by Farmersville native and former bicycle racer Floyd Landis — is investing well over a million dollars in a drying and processing facility to handle the hemp that farmers here are growing for the company.

He said the company can’t commit to processing hemp for other farmers, although it would like to help those still looking for solutions.

Similarly, Groff said he and about 50 other area farmers working together as Keystone Agri-Science invested around a million dollars in a drying machine that might be able to handle more than their crop.

“We’re not making any promises other than that we'll try,” Groff said, noting that a growing list of farmers outside the group want to use the dryer.

He said he’s guessing that the area won’t have enough drying capacity this year for all the hemp that's growing.

"There will probably be some frantic farmers trying to get it dry," he said.

Lancaster County’s most famous bicyclist is now one of its biggest players in the fledgling local hemp industry.

Floyd’s of Leadville — a CBD company founded in Colorado by Farmersville native Floyd Landis — has about 50 Lancaster County farmers growing about 65 acres for CBD.

Landis won the 2006 Tour de France but was stripped of the title after testing positive for elevated levels of testosterone. He later confessed to using performance-enhancing drugs.

In 2016, he founded Floyd’s of Leadville, which sells cannabis derivatives that are believed to have health benefits, and in October he plans to open a downtown Lancaster bicycle showroom and coffee shop that also sells hemp products.

Jake Sitler, the company’s director of business, said Floyd’s is using its experience with hemp to oversee its local growers “from seed to product,” and expects harvest to start in about three weeks.

All the harvesting will be by hand, Sitler said, and even though none of Floyd’s farmers has more than four acres, it’s a big endeavor that will probably take whole families or communities to accomplish.

In a February interview, Landis said Lancaster County has a good climate for growing hemp and he believes local farmers have the aptitude to produce what can be a labor-intensive crop.

“I know tobacco used to be a big cash crop here, and it’s not what it used to be, and I think this would be a good replacement for that,” Landis said at the time. “Once they’ve grown hemp, we’re here to purchase it.”

Meanwhile, work is underway at Floyd’s of Lancaster Cafe, the company’s downtown Lancaster shop. It is expected to open at 237 N. Prince St. in October.

What does hemp arrest mean for farmers? Crop lives in gray zone of legality, but Pennsylvania growers likely in clear

The chance to grow industrial hemp is getting a lot of attention here, with Lancaster claimi…

The first Pennsylvania Hemp Summit will be in Lancaster County next month.

Floyd Landis is known for bicycling, and it’s no coincidence that the place his CBD company plans to process hemp is near the river trail that…

The first Pennsylvania Hemp Summit, being held in Lancaster city today, has drawn a sellout crowd.

'It's a lesson': Hemp farmers lose thousands of dollars of their crop after fire near Quarryville

An early morning fire destroyed a two-story shed that was housing industrial-grade hemp on Tuesday in Eden Township.

Industrial hemp can be turned into many things.

'Takes your breath away': Odor of marijuana greenhouse in Luzerne County draws complaints

A marijuana growing operation in Luzerne County has a stench apparent for half a mile that is driving neighbors away, according to The Philade…

So far, Pa.'s hemp harvest hasn't been nearly as lucrative as farmers hoped

Hard data is difficult to come by at the end of Pennsylvania’s first commercial hemp harvest in eight decades, but it’s clear prices and deman…