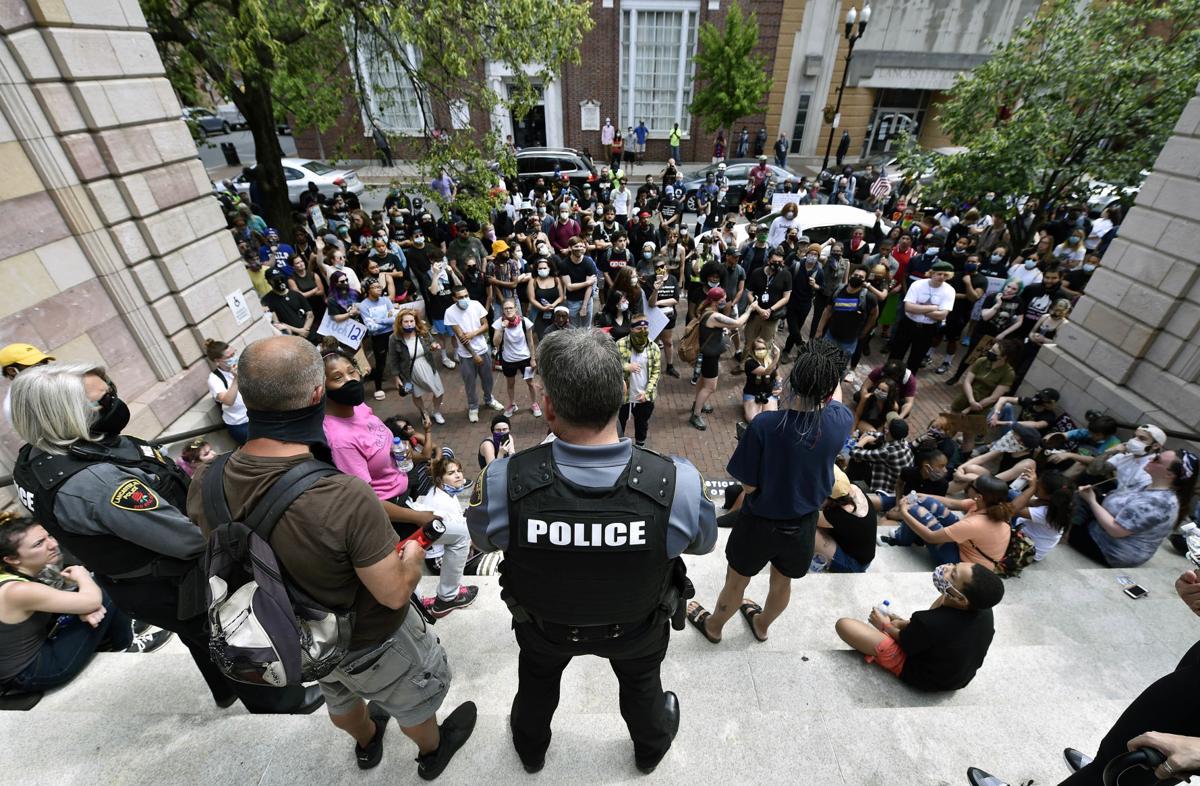 Lancaster Bureau of Police Chief Jarrad Berkihiser, left, addresses the crowd on the steps of the courthouse, as protesters march against police brutality and the treatment of George Floyd, in Lancaster Monday June 1, 2020. 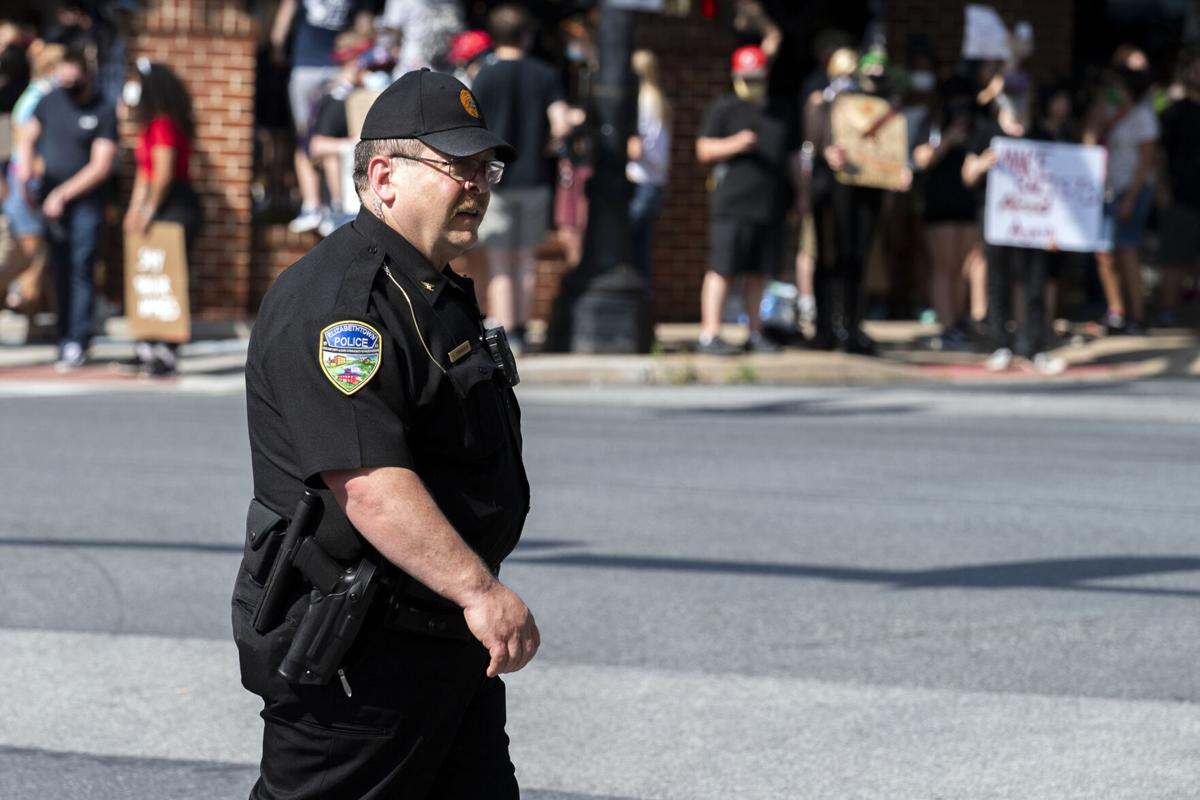 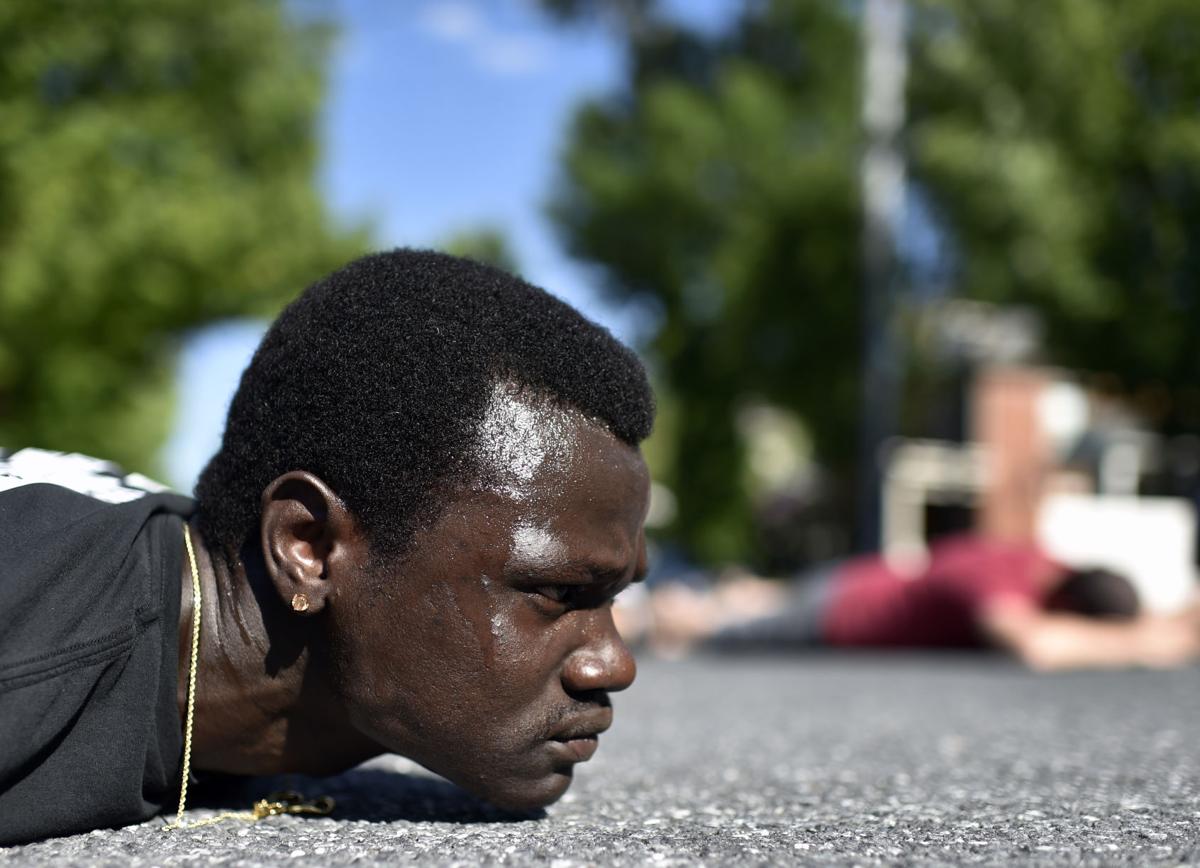 Alaak Deu, of Lancaster, lays on the ground for nine minutes in front of the office of state Senator Ryan Aument, R-Lancaster, during a Black Lives Matter protest in Lititz Friday June 12, 2020. 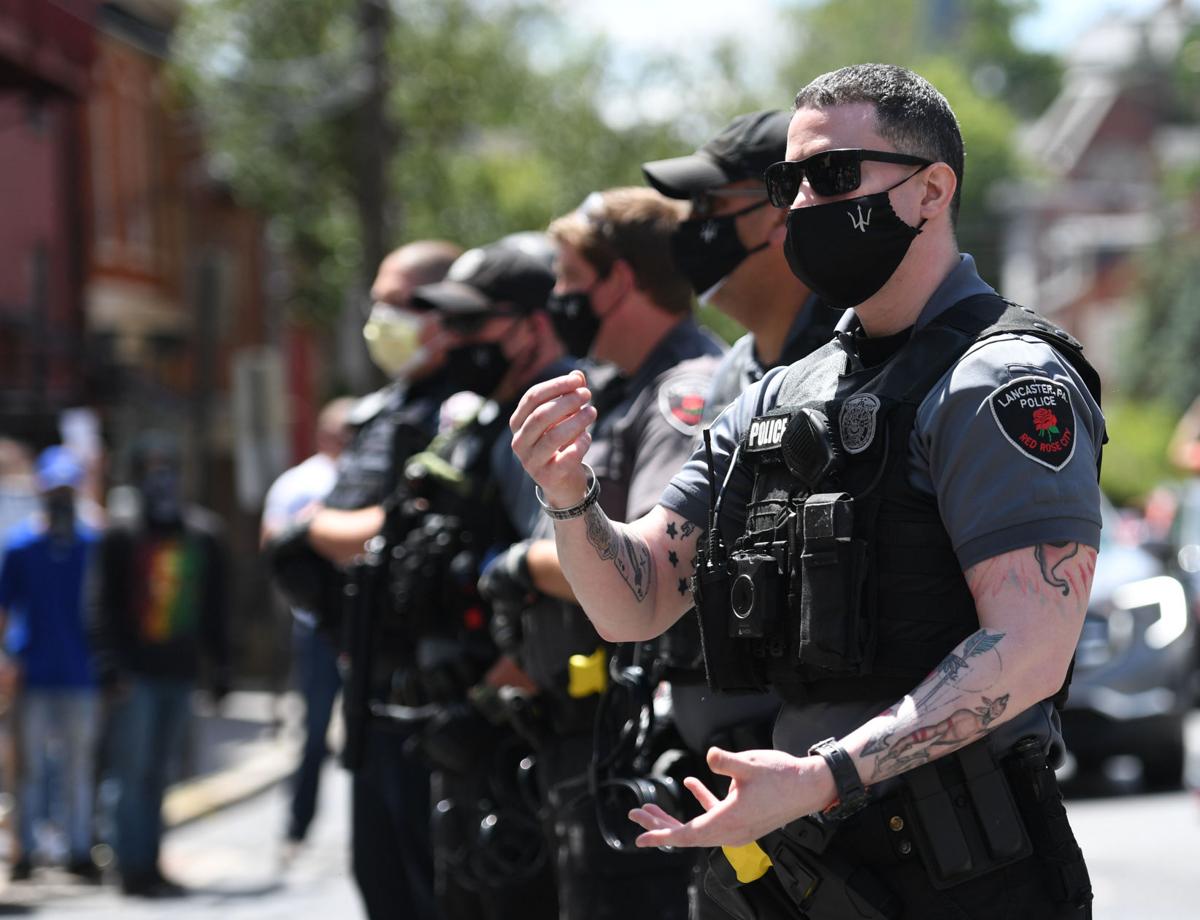 The protest near the police station in Lancaster city on Sunday, May 31, 2020. .

A lifeguard atop a tall chair shades herself beneath an umbrella as a woman submerges neck-deep in Manheim Township’s Skyline Pool, likely a common snapshot in a summer when temperatures regularly have exceeded 90 degrees.

What sets this scene apart are the two armed police officers, standing poolside with hands on their hips. They were called in to remove a parent, who accused a pool manager of singling out a couple of Latino and Black teen girls whose bathing suits earlier were deemed too skimpy.

To Manheim Township resident Savannah Thorpe, it was a clear example of problematic policing, a system that she said often sends armed officers responding to nonviolent situations. That practice, Thorpe said, has led to numerous police killings of unarmed Black people, including the death of George Floyd this May in Minneapolis.

“There are a lot of ways to enforce the rules that we all agree on without guns,” she said.

With those problems in mind, Thorpe, 26, and thousands of like-minded people across Lancaster County and the nation have taken to public spaces since spring calling for reform, specifically asking that taxpayer money be diverted away from law enforcement budgets to “defund the police.”

But local police officials, including Lancaster city police Chief Jarrad P. Berkihiser, claim that a loss of funding will only hurt their ability to preserve community safety, possibly meaning that some criminal investigations will have to be ignored.

“What I can tell you is any reduction in the police operating budget will be a loss in service,” Berkihiser said.

Lancaster’s 2020 police budget is $26,846,397, making up about 43% of all expenses projected for the city’s entire general fund, according to documents shared by city Business Administrator Patrick Hopkins.

“It can be a tremendous (financial) burden,” she said.

Now, Glazier said, many people scrutinizing police are asking whether that money is being spent in the best possible way.

“Under what circumstances do you need somebody who is fully armed, in a bullet-proof vest, carrying a Taser, pepper spray and who probably has access to other weapons?” she asked.

To answer that question, Glazier said, it might be good to look at crime statistics.

Berkihiser shared year-end numbers for 2019, looking at reporting data for homicides, rapes, arsons, robberies, assaults and thefts in Lancaster city. Of the 2,272 crimes reported, 20% were homicides, rapes, robberies and aggravated assaults, which Glazier defined as clearly violent crimes. That percentage, she said, likely would be much smaller still when looking at the police calls not included on Berkihiser’s list – offenses like vandalism, noise complaints and other lesser disturbances.

Thorpe said she’s skeptical that guns are needed to maintain order during those lesser calls, though she agreed there is a place for firearms in more violent cases.

‘The uniform itself brings so much fear’

It’s those disturbances that protester DaShaun Neville, 22, said he has in mind when he calls for police to be defunded – reallocating money to some groups of unarmed responders or social servants who can maintain peace and order without weapons on their hips.

It’s a suggestion that Berkihiser dismissed.

“What I can tell you from my experience, being in law enforcement for 30 years ... is although this might sound like a great idea in theory, it will get people hurt,” the Lancaster police chief said. “Many of these calls involving mental health or domestic violence rapidly evolve and are unpredictable, and we often do not know what we have until we arrive on scene.”

Neville, who’s participated in numerous pro-reform protests across Lancaster County, pointed to the photo of Manheim Township’s poolside dispute as an example.

“They’re constantly having their hand on their hip where the holster is,” he said. “The uniform itself brings so much fear.”

Manheim Township police and municipal officials did not return requests for comment.

Conrad Kanagy, an Elizabethtown College sociology professor, has spent years studying race, ethnic relations and criminal justice. In an interview earlier this summer, he provided some historical context that could explain Neville’s fear of the uniform.

He said it’s likely steeped in centuries of institutional racism, which can be traced back to America's slave-owning colonists, who first introduced the racist concept that Black people were inferior to white settlers.

It’s upon that concept that some of the first American law-enforcement agencies were created, tasked with patrolling for escaped slaves, Kanagy said. That mindset persisted through the 1970s and 80s, he said, when politicians popularized movements like the “War on Drugs” and being “Tough on Crime,” leading to much higher incarceration rates for people of color.

And it continues today, he said.

“For any organization to say that it is beyond addressing issues of racism or issues that emerge from a racially constructed society, they’d have to be on another planet,” Kanagy said. “We have been so saturated with these values that we can’t escape them unless we are really intentional about it.”

Being intentional about it also means acknowledging underlying issues that lead to arrests, Thorpe said, pointing to crimes often exacerbated by circumstances like poverty, mental illness and substance-use disorders.

They are crimes that often lead to arrests instead of treatment -- arrests that, in turn, lead to prison sentences, job-preventing criminal records and isolation from needed support, she said.

“On what planet does that help? When you are having a bad day, do you go sit in a cinder-block closet? No, you go to people who love you,” Thorpe said. You go to medical professionals; you might seek out a therapist.”

“Cops are doing a lot of things that really aren’t our strong point. Mental health cases do lead to criminal charges because it’s the only tool we have in the box,” he said, pointing to the near-absence of state-run mental health facilities.

Pepper spray and riot gear: a look back at what happened on day 2 of Lancaster’s protests

In the two weeks of mostly peaceful protests in Lancaster city, one day arguably stands out …

That’s why Thorpe said she believes in moving money away from police departments -- defunding them to instead send municipal dollars toward science-based solutions administered by college-educated, crisis-intervention specialists and social-services experts.

While police departments are mostly paid for by municipal dollars, social services typically are funded at the county or state level.

To overhaul the current system, it could take years of negotiations, planning and spending, said Frederika Schmitt, an associate professor of sociology and criminology at Millersville University, where her research includes social inequality.

“The devil is always in the details, right?” she said, agreeing that reform is needed.

Also, it’s highly unlikely that the same model could be applied everywhere, she said, calling attention to cultural differences that exist between communities, which would have to be researched.

“Those on-the-ground decisions are going to have to be made on a jurisdiction-by-jurisdiction basis. What works in Lancaster isn’t what’s going to work in Philadelphia,” she said calling for a research-based approach that includes public input. “That’s what’s needed in every community.”

And Berkihiser said he, too, encourages due diligence over “knee-jerk reactions to fulfill a specific agenda."

Offering perspective, he shared what he believes the police force would look like if 20% -- about $5 million – was cut from its budget.

Since late May, protesters have taken to streets throughout Lancaster County to fight racial…

Such a cut, he said, likely would lead to the loss of about 60 employees, leaving 85 officers to police a city of about 60,000 people, and that’s not accounting for vacation and sick time or long-term illnesses and injuries.

Within that minimized force, Berkihiser said, it’s unlikely that the manpower would exist to investigate anything but violent felonies.

It also could mean the elimination of specialized units designed to investigate crimes tied to gang violence, sexual assault and child abuse, the chief said.

“Failing to sufficiently fund the state police would create a budget crisis, which could cause the cancelling of future cadet classes and changes to our current operating posture and police business practices.” he said. “The result would be additional strain on our existing troopers, a greater reliance on overtime, increased response times, and a reduction in services – potentially negatively impacting public safety.”

Berkihiser said he feels police critics overlook efforts to reform police work from within, including staffing an in-house social worker, as well as officers trained in crisis intervention.

“Just two weeks ago, patrol officers were able to convince a suicidal subject on the roof of the Prince Street Garage to back away from the ledge to safety,” he said.

In Elizabethtown, Chief Cunningham said a reform-oriented mindset led to the department’s 2018 rollout of its Second Chance Program -- a program that has officers partnering with drug-rehabilitation experts at Blueprints for Addiction Recovery.

The program was designed to help fight the opioid epidemic by allowing street-level officers to refer low-level, drug-related lawbreakers into substance abuse treatment programs as an alternative to punishment, Cunningham said.

“Most of them would have faced some kind of criminal charges,” Cunningham said.

The program has since been adopted by more than a half dozen neighboring municipalities.

Cunningham, who has walked among protesters this summer, said the program is just one sign that he and other police officials are committed to reform. He said he’s listening to concerns, and even occasionally agrees.

"The mindset is we are not going to arrest away all of our problems," the chief said.

Lancaster protesters stop marching to take man, lying on sidewalk, to the hospital

Here are the restaurants that opened, closed in Lancaster County in September 2020 [dining out]

In its past, Elizabethtown may have been a segregated 'sundown town' [The Scribbler]

When Bob Walter thinks about the Little Conestoga Creek, his mind often wanders back to the 1700s, a time when colonials were just settling La…

The 7th annual Recovery Day Lancaster will be held virtually this year, but there are plenty of opportunities to share and connect.