When Pennsylvania’s archery deer season opens Oct. 5, West Lampeter bowhunter Rick Evans will be in the woods, sitting in a tree stand.

That’s nothing new for the lifelong, 55-year-old bowhunter.

But he said he will have a special appreciation for being out this season, after his potentially-fatal experience last year.

While bowhunting in Iowa on Nov. 13, 2018, Evans became a statistic. He was the one out of every three hunters using tree stands that studies say will fall.

Evans, who works as a house painter, has recovered from his accident, but he said he felt compelled to share his story as Pennsylvania’s annual archery deer season draws close.

“If people read my story, and one or a couple of them wear a safety harness, or do something that keeps them from falling out of a stand, then I’ll be happy,” he said.

“The Lord spared me that day, and I think it’s because he wants me to tell people what happened to me.” 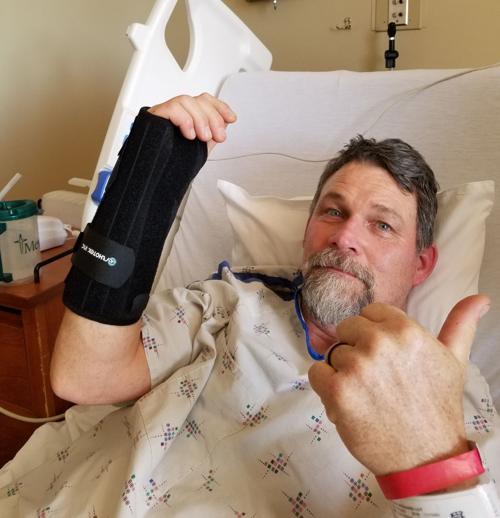 Tree stands are wildly popular tools used by deer hunters across the U.S. to “gain the high ground,” as it were, in their annual quests to bag some venison.

Of the roughly 10 million deer hunters in the United States, industry studies indicate about 84 percent of all gun hunters and 94 percent of all bowhunters use tree stands.

So given the one-in-three-will-fall estimate, we’re talking about millions of people falling out of tree stands at some point during their hunting lives.

It’s true that most survive the falls, but some die, while others suffer serious injuries.

The number one preventative measure that’s recommended to avoid a fall is wearing a safety harness that you attach to a tree or rope the instant you step foot off the ground to climb up.

Yet surveys continue to show an alarming number of hunters who admit never wearing any type of fall restraint device, or who occasionally hunt without one.

Evans admits he was “rush, rush, rushing” to get into the Iowa woods to hunt last Nov. 13. He and his wife, Dawne, were on a dream hunt in the trophy-deer heaven that is Iowa.

At best, nonresidents of the Hawkeye State can get a license to bowhunt in Iowa once every three years, due to the limitations the state puts on the number of annual, nonresident permits.

Evans hadn’t been to Iowa in five years, by the time 2018 rolled around.

“So you can understand, I was pretty excited to be there,” he said.

Nov. 13 was the Evans couple’s first hunting day with a friend of theirs, and they had a sweet spot picked out for the evening.

The two planned to hunt side by side in separate stands hung in the same tree. Evans got Dawne’s stand set, watched her climb up, and then he climbed up to his own perch.

“I was so happy to finally be up and have everything set, that I just didn’t hook my safety belt to the tree,” he said. “I always do it, but this time, I just forgot. I can’t explain it any different than that.”

Not long into the hunt, a buck showed up and Evans grabbed his bow. He went to spin around in the stand in order to hang up the bow and grab his binoculars for a better look.

“He just took a step backwards, and went right off the platform,” said Dawne, who watched her husband fall.

For his part, Evans remembers turning in the stand and then being on the way down.

“I don’t really remember stepping off,” he said.

Evans fell about 12 feet and hit the ground in a heap. His resulting injuries suggest he landed on his right arm, which was pinned between his chest and the ground.

Dawne yelled down to him, but her husband neither responded or moved. So she climbed down and began yelling at him.

“I knew right away my arm was broken,” he said. “And I knew I had a tightness in my chest, but it didn’t really hurt at first.”

The two hunters walked out of the woods and headed to the hospital, where doctors determined Evans broke his right arm at the wrist, broke his sternum and the big toe on his right foot.

There wasn’t much that could be done for the toe or the sternum, but surgery two days after the fall implanted a plate and steel screws in his arm.

“The funny thing was, I wasn’t really mad or feeling sorry for myself,” Evans said. “I was disappointed, of course, but I mostly felt thankful. I was thankful to be walking around and talking.”

Not one to quit easily, Evans quickly secured a medical-related crossbow permit, had a crossbow shipped from Lancaster to Iowa, and he was back out hunting in a raging snowstorm just over 24 hours after his surgery.

This time, he was sitting in a blind that was elevated above five steps with a hand railing attached.

Evans never did fill his Iowa tag last year, but he did come home alive and on the road to healing.

By Christmas, he was shooting his compound bow again. His sternum injury apparently has forced him to reduce the draw weight on his bow by a few pounds – even today, nearly a year after his accident.

“I just can’t pull 65 pounds easily the first time I pick up the bow,” he said. “After I get it back two or three times it’s fine, but you don’t get to just draw your bow a couple times when a deer shows up in the woods.”

But Evans willingly agrees a few pounds of draw weight is a small price to pay for what could have been.

“I tell people, the devil pushed me off that stand, but Jesus caught me on the way down,” he joked.

Evans feels pretty confident that he won’t forget to connect his safety harness ever again. In fact, he now adds a “lifeline” to all of his hanging-stand sets.

A lifeline is a sturdy rope that’s attached to the tree above a tree stand and to the tree or the climbing ladder at ground level.

A hunter connects his safety harness tether to a sliding knot on the rope at ground level, and then pushes that knot up as he climbs. If the hunter falls, the knot grips the life line tight, preventing the hunter from hitting the ground.

Evans has been telling his fall story to any hunters he meets. And he’s heard that a few who didn’t previously wear safety harnesses, started to do so after talking with him.

By sharing his story with LNP, he’s hoping to reach an even bigger audience.