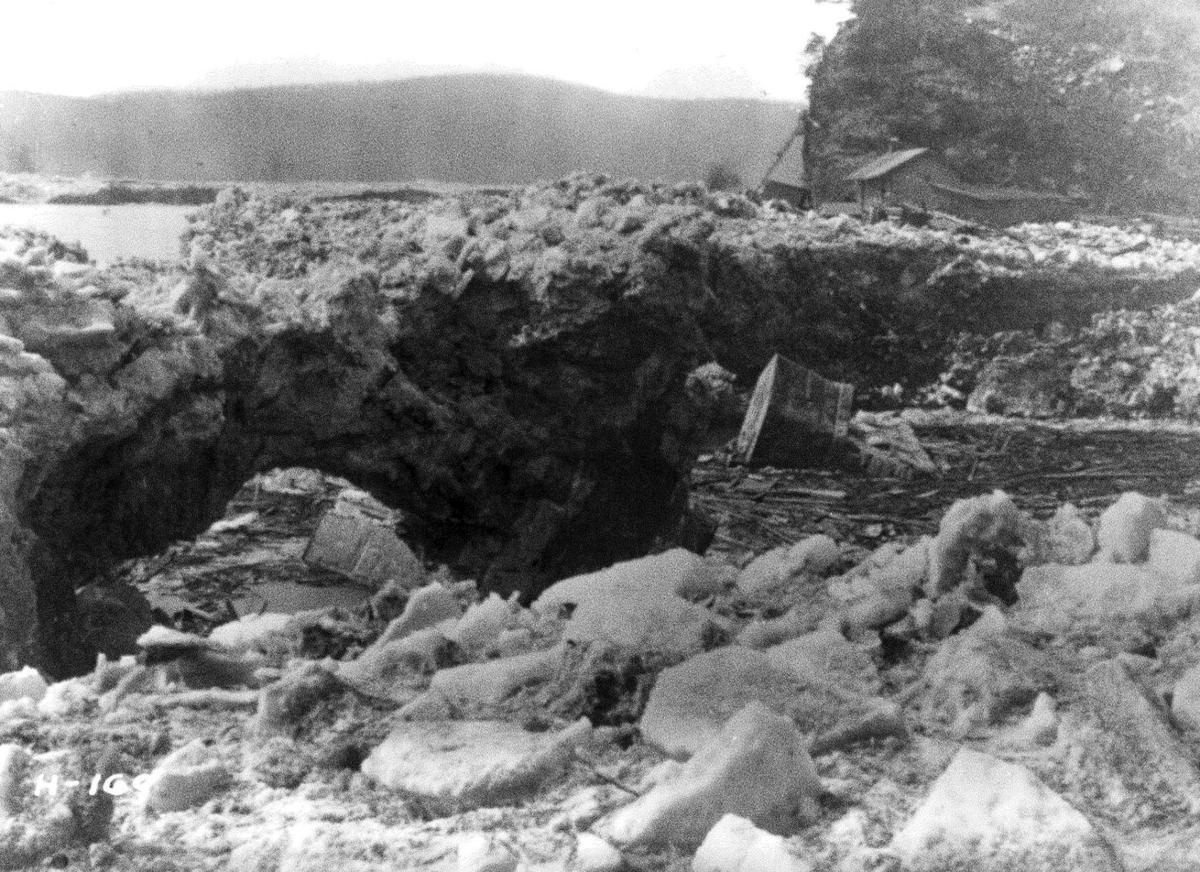 Weeks after ice flooding in 1904, the mouth of the Conestoga River at Safe Harbor is still a mountain of ice. The river is visible through the ice arch in lower left. 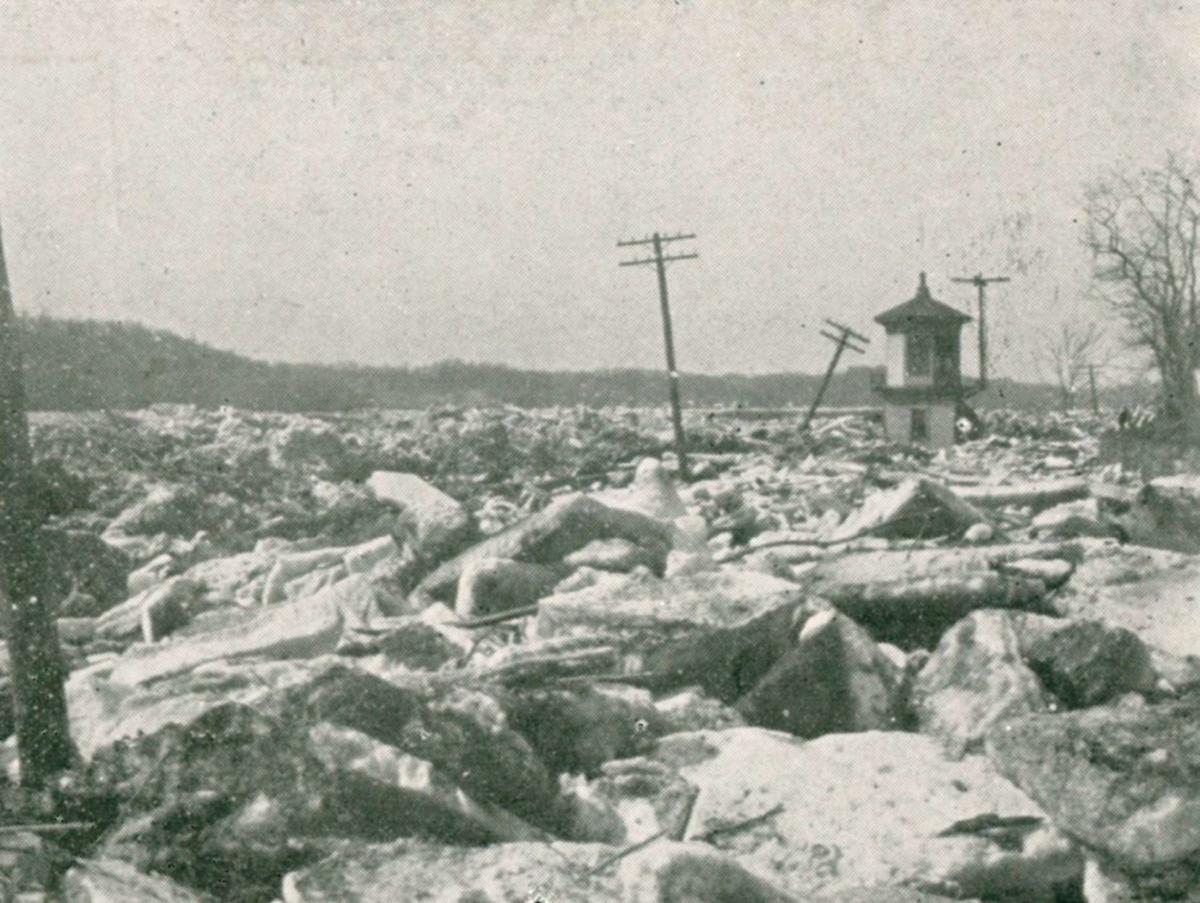 All that remained of the village of Collins along the Susquehanna River in Conoy Township after the 1904 ice flood was a railroad control tower. 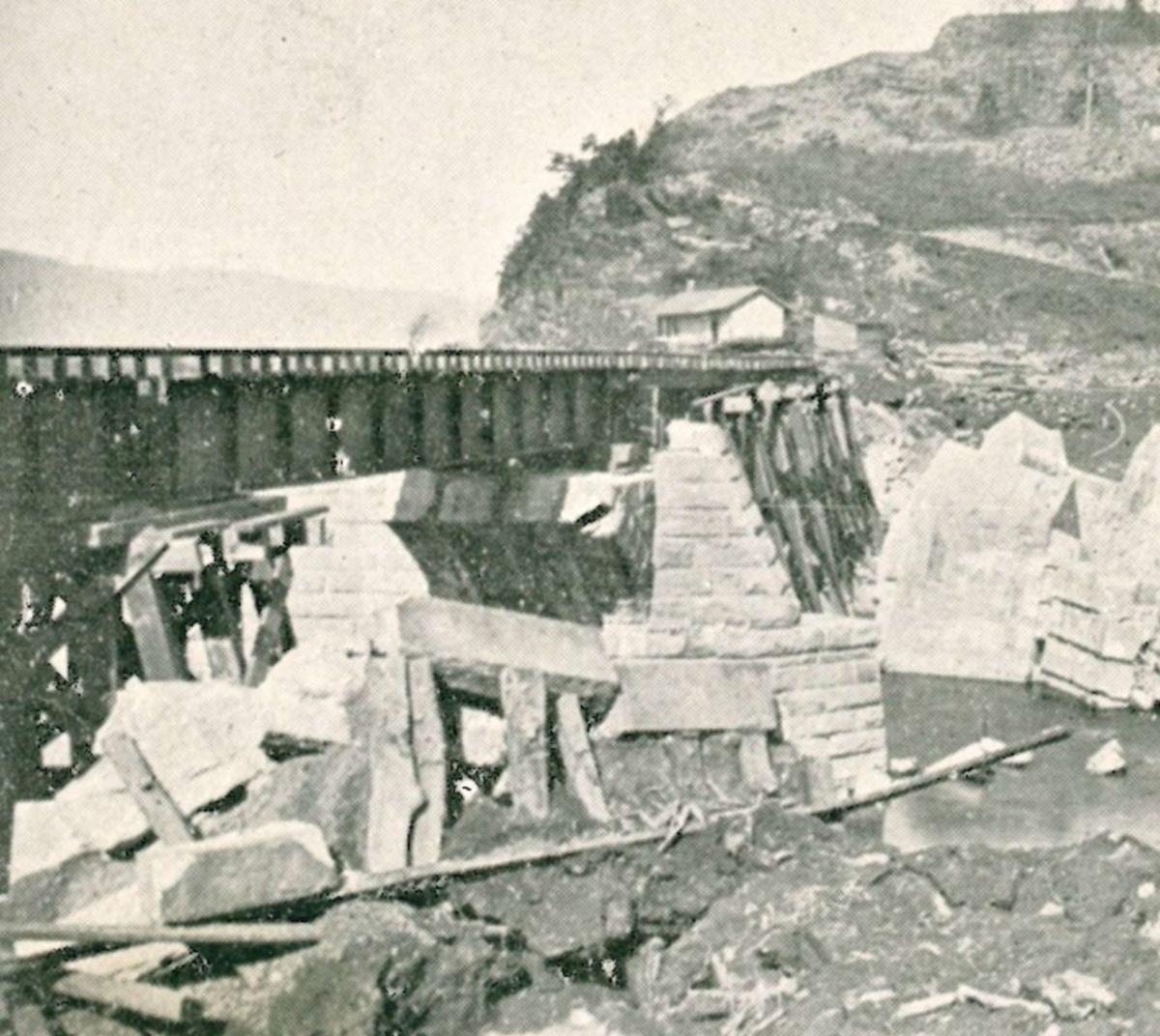 A railroad bridge over the Conestoga River at Safe Harbor lies in ruins after the 1904 ice flood. 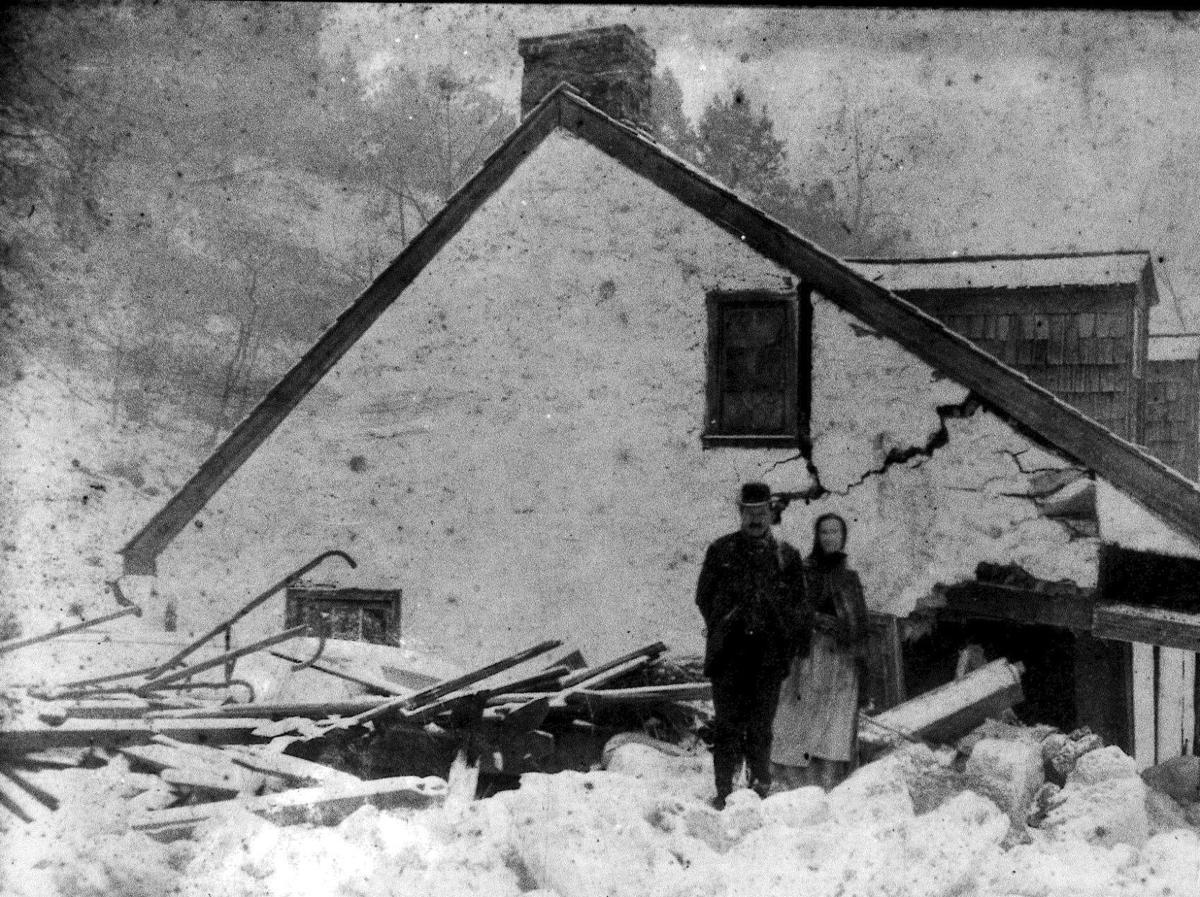 A couple pose on top of ice on the second floor of their home in Safe Harbor. 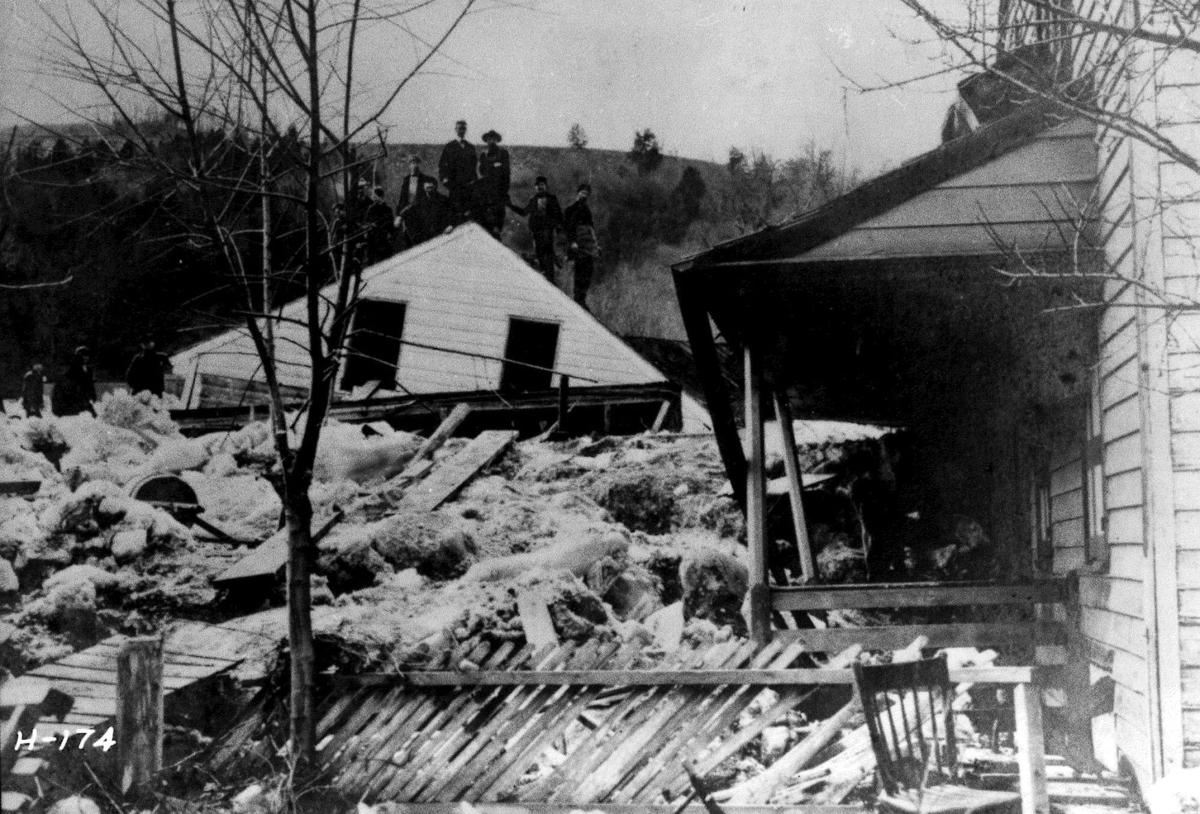 Villagers at Safe Harbor stand on a destroyed home's rooftop after the ice flooding of March 1904. 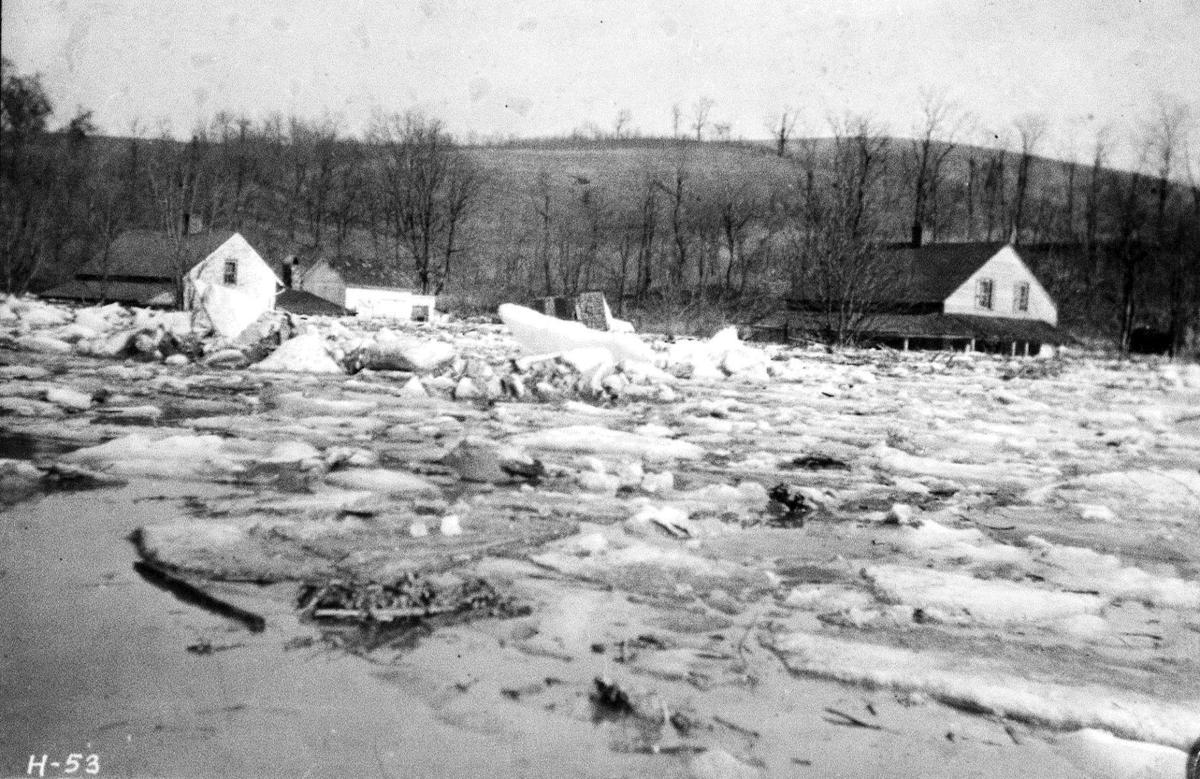 Some of the Safe Harbor village homes destroyed by ice and flooding in March 1904 remain up to their second floor in ice even weeks after the event. 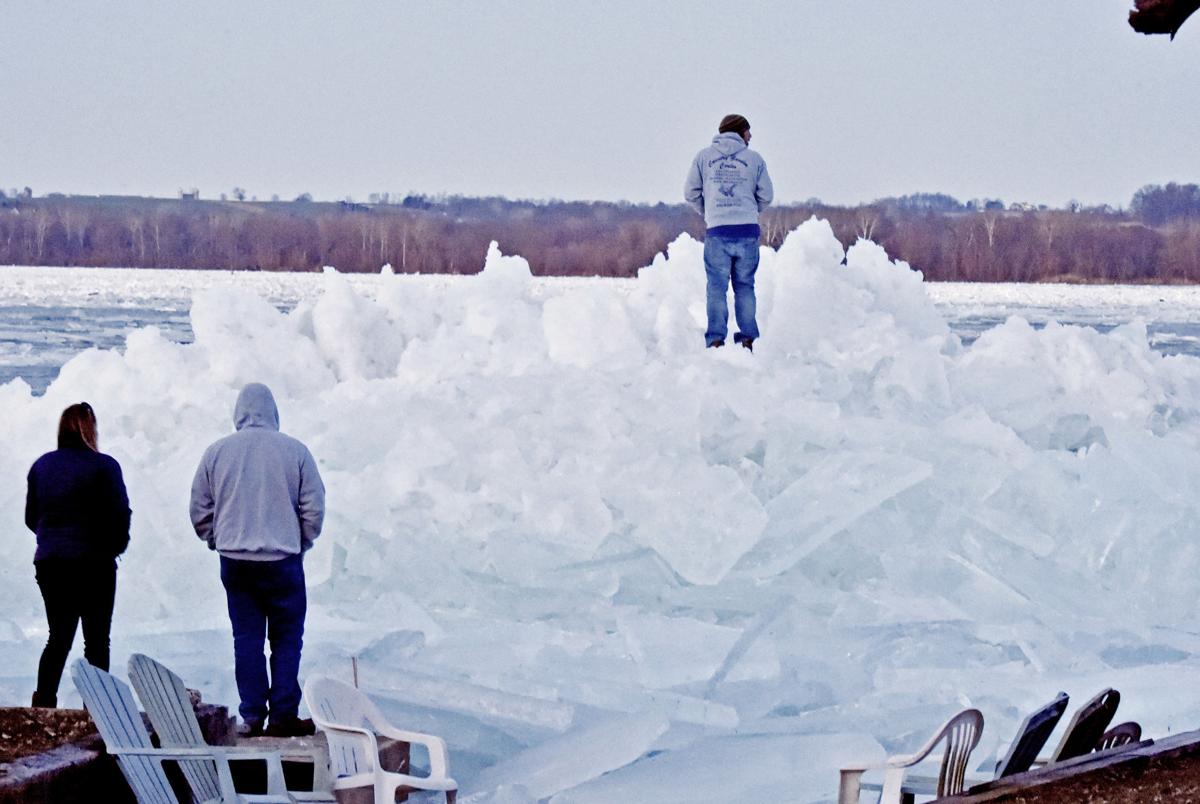 A man stands on ice that piled along the York County shoreline of the Susquehanna River at Long Level Sunday January 14, 2018.

Weeks after ice flooding in 1904, the mouth of the Conestoga River at Safe Harbor is still a mountain of ice. The river is visible through the ice arch in lower left.

Some of the Safe Harbor village homes destroyed by ice and flooding in March 1904 remain up to their second floor in ice even weeks after the event.

A man stands on ice that piled along the York County shoreline of the Susquehanna River at Long Level Sunday January 14, 2018.

How bad was the worst recorded ice flood along the lower Susquehanna River?

In Conoy Township, the little village of Collins with its train station and hotel was scoured off the earth forever.

In Safe Harbor, ice the size of icebergs and a backed-up Conestoga River so damaged dozens of village homes that they were sold for salvage for $30 apiece.

The stone arch railroad bridge across the Conestoga was hoisted up like a Tinkertoy and dropped in the water a tangled mess.

In Marietta, a family member watched stunned as tobacco sheds from a family farm several miles upriver on what is now Three Mile Island came bobbing by.

Unless you look closely at the grainy black and white photos, or listen to York County historian Paul Nevin talk about it, it’s difficult to imagine the destructive force and sheer height of the ice chasms in what he calls "The Great Ice Floe of  March 1904."

Nevin had his audience gasping at the photographic scenes of destruction Wednesday night during a Susquehanna Heritage talk at the Zimmerman Center for Heritage along the river near Long Level.

“Yesterday’s Flood the Greatest Ever Known!” a York newspaper blared.

Certainly we’ve not seen anything as bad since.

The stage for a great natural disaster was set by an especially cold winter that froze the Susquehanna solid. By Jan. 21, the Lancaster New Era reported ice already 2 feet thick and horse-drawn freight wagons of tobacco crossed between Lancaster and York counties.

The impending ice break-up coincided with three iconic construction projects going on in the two counties.

Finishing touches were being put on the river’s first hydroelectric dam at York Haven. The Pennsylvania Railroad’s Low Grade line was being etched along the river on the Lancaster County side and the stone Shocks Mill railroad bridge was rising high above the river.

“At the beginning of March, the rains came and that’s when the fury of the river began to be unleashed,” noted Nevin, who is manager of the Zimmerman Center for Heritage.

By March 4, local papers were devoting headlines to rising waters and the formation of ice gorges, a term given to masses of ice that obstruct the flow of water in a narrow space.

The cities of York and Lancaster emptied as townsfolk flooded to the river to see the great sight.

But, overnight, spectacle turned to catastrophe.

The York Haven power plant and a paper mill were destroyed.

The town of Collins near Falmouth was erased by ice. Five old canal lock houses crashed into each other. A train station was ground away. The only thing left standing was the top of a train control tower that was shoved 5 feet off its foundation.

Just downriver, in Bainbridge, the new railroad station floated away. On the farmed islands just offshore, barn after barn was either splintered or lifted up and swept away.

Ice buried the active railroad under 12 feet of ice. It took an estimated 3,000-4,000 railroad workers and local workers a week to clean the tracks chunk by chunk.

In Finn’s Hotel, which today stands at the trailhead of the Northwest Lancaster County River Trail, the water rose 3 feet and 3 inches in three minutes and flowed over the porch.

Cranes building the Shocks Mill bridge were either mangled or submerged.

Safe Harbor village suffered perhaps the worst of all. As the ice gorge dislodged from Turkey Point and moved downriver on the afternoon of March 8, the Conestoga River was blocked at its mouth and backed up.

More than 3 miles up the Conestoga, almost to Millersville, the Rock Hill Hotel was inundated with 4 feet of water.

The 79 houses built at Safe Harbor village along the Conestoga were smothered in ice and water, forcing families onto roofs. A few years later, the hopelessly damaged homes were sold for salvage.

For all its destruction and rescues up and down the river, there was no loss of life.