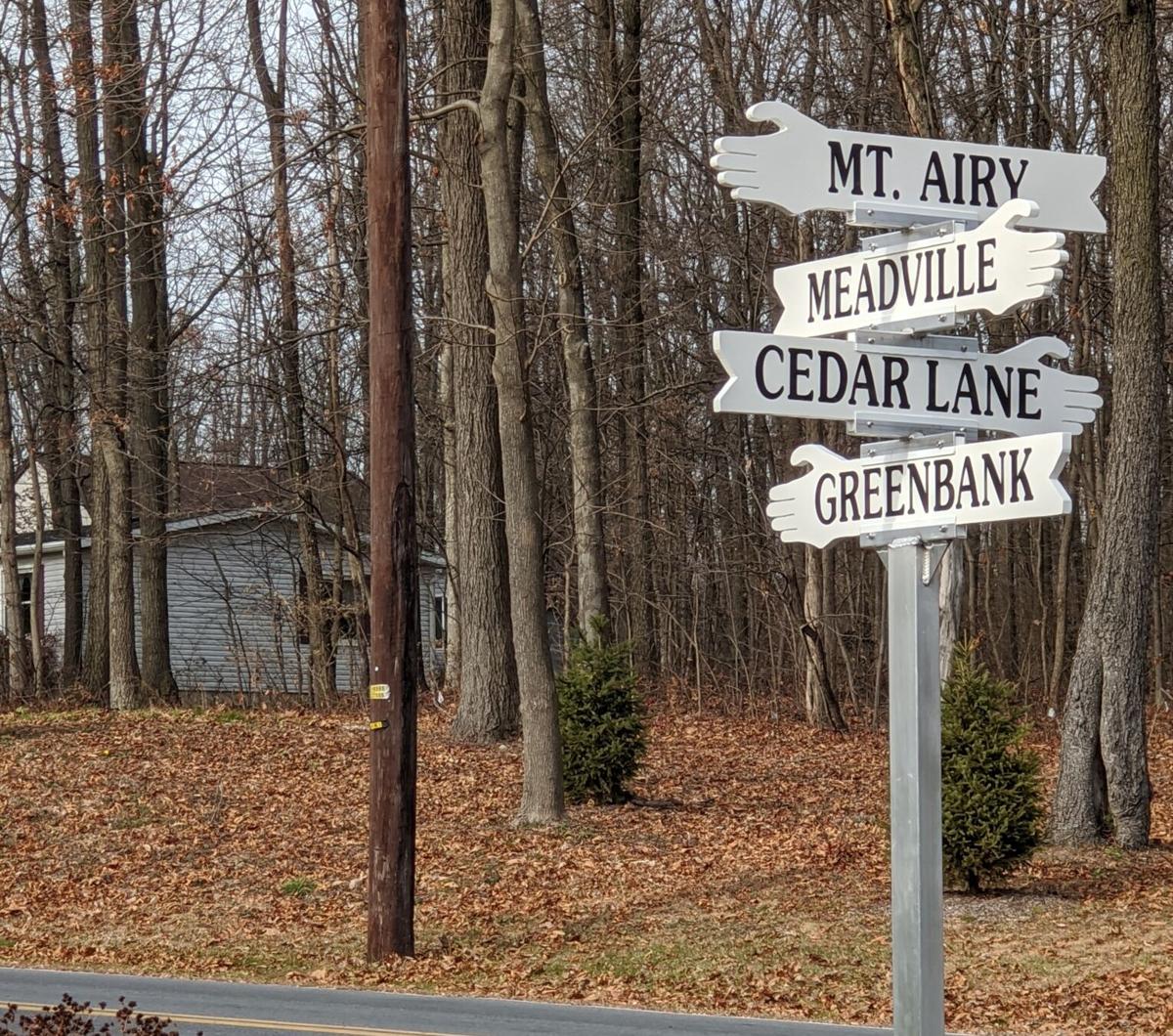 Replacement "Handboards" sign made by Jack Hilliard of Salisbury Township.

Replacement "Handboards" sign made by Jack Hilliard of Salisbury Township.

Road and street signs, standard and sterile today, once were enlivened by pointers at the ends of the signs. Travelers in the 19th and early 20th centuries called these signs, with a finger unfurled from a hand and pointing in the direction of the named town, “handboards.”

The sign stood on a post at the corner of what is now Route 897 (Springville Road) and Ranck and Meetinghouse roads. That’s in Salisbury Township, just over the border of East Earl Township in eastern Lancaster County. It’s on the edge of the Welsh Mountains.

That old sign disappeared sometime in the 1940s, but for the past year a similar handboards sign has directed drivers to four nearby communities: Mount Airy, Meadville, Cedar Lake and Greenbank. Hilliard lives in Greenbank. Hilliard designed the sign.

“I could not get a good description of it, so the sign is not patterned on the original sign,” he says. “I was born in 1933, and I don’t remember the sign clearly. Neither does anyone else.”

So Hilliard laid his hand on a piece of paper, drew lines around it and cut the ends of four boards to fit his pointing hand. He painted the directional boards white, with black lettering for the place names. He mounted the handboards on an aluminum post at the crossroads.

What once was a famous location in Salisbury Township once again is marked by its namesake road sign.

Handboards were required at turnpike intersections from the beginning. So they existed in Pennsylvania at the turn of the 19th century. They became common at most road intersections by the middle decades of that century.

The area of the Welsh Mountains called “the Handboards,” a roughly defined section near the crossroads sign, was well known by 1877. An April 4, 1877, newspaper account describes the region around the Handboards at length.

That story also refers to nearby “Blue Rocks,” a massive pile of rocks whose “huge fissures form admirable places for secreting stolen goods.”

The Handboards became infamous in the 1890s for two sensational murders. In 1890, George Boots stabbed Amos Bills to death. “Another Welsh Mountain tragedy,” as the Semi-Weekly New Era referred to it, occurred in 1896. Jerry Green killed his half brother, Abe Green.

The Handboards achieved their chief notoriety because Abe Buzzard and his gang of outlaws selected that part of the Welsh Mountains as their headquarters, according to an Aug. 11, 1886, news account.

Jack Hilliard says he is pleased to have placed a replacement sign at the Handboards, once one of eastern Lancaster County’s most famous and simultaneously infamous locations.

Jack Brubaker, retired from the LNP | LancasterOnline staff, writes “The Scribbler” column every Sunday. He welcomes comments and contributions at scribblerlnp@gmail.com.