Thursday night’s Republican debate, pitting the party’s 10 leading presidential candidates against each other on live TV, offered plenty of entertainment for political mavens.

But did it change the race significantly or winnow the field? Probably not, political scientists said.

“It’s a debate in August,” said Christopher Borick, a professor at Muhlenberg College in Allentown. “Its lasting impact is probably marginal.”

No one made a campaign-ending gaffe, said David O’Connell, a professor at Dickinson College in Carlisle.

Stephen Medvic, a professor at Franklin & Marshall College, concurred: “I don’t think this was deadly for any of these candidates.”

Yet even with a crowded field, the kickoff debate of the 2016 campaign gave voters an opportunity to learn where the candidates stand on issues and “measure them as potential presidents,” said Fletcher McClellan, professor and dean of faculty at Elizabethtown College.

“These debates, for all their flaws, are important,” he said.

• For better or worse, Donald Trump was himself: Many people thought the real estate tycoon would tone down his rhetoric, Medvic said. Instead, he was as brash and outspoken as ever.

“I think that was a little surprising,” he said.

Trump leads in the polls, but the experts LNP consulted don’t believe he will be the eventual nominee.

“There is a real limit to his appeal,” McClellan said.

Trump’s outsider message “is not something that historically has worked in a Republican contest,” O’Connell said.

The party elite prefers mainstream candidates who work within the system, he said. Their endorsements count for a lot, and “those endorsements are not going to go to Trump,” he said.

Especially since Trump refused to guarantee his support of the eventual Republican nominee, Medvic noted.

“I don’t see how the party organization can tolerate that,” he said.

• The leading establishment candidates did well enough ... or did they? After Trump the top-polling candidates leading up to Thursday’s debate were former Florida Gov. Jeb Bush and Wisconsin Gov. Scott Walker.

O’Connell thought their performances were “solid.” Candidates like Bush and Walker didn’t need to hit home runs, he said: They just needed to come across as serious, and they did.

McClellan disagreed on both counts. Bush “is still trying to find his voice,” he said, and as for Walker: “I think he shrank on the podium.”

Bush “didn’t stand out in any way, as you might expect a front-runner would do,” Borick said.

Opinion was divided on U.S. Sen. Marco Rubio of Florida. McClellan thought he “re-established himself,” but O’Connell thought he failed to generate a game-changing moment.

Mike Huckabee maintained his “core support,” McClellan said, but none of the experts predicted a major leap for the former Arkansas governor.

• The insurgents are still in the game: Candidates such as U.S. Sen. Rand Paul of Kentucky, neurosurgeon Ben Carson and U.S. Sen. Ted Cruz of Texas base their appeal on standing apart from the Republican establishment.

Borick thought Carson “acquitted himself pretty well,” but McClellan disagreed, saying, “he didn’t seem to be that knowledgeable.”

Opinion was divided on Cruz, too. McClellan thought he showed off his skills as “a champion debater” to advantage, while O’Connell thought he was “kind of forgettable.”

Paul had some success in differentiating himself from the other candidates, but “he has more to do,” McClellan said.

Again, no one made a “huge mistake” that doomed his chances, O’Connell said.

• Some low-polling candidates got fresh looks: There was a consensus that the night was good for New Jersey Gov. Chris Christie, who got into a sharp battle of words with Sen. Paul.

Going into the debate, the two had been the lowest-polling of the 10 contenders, averaging about 3 percent support nationally.

“She showed she deserves to be on the main stage,” McClellan said. 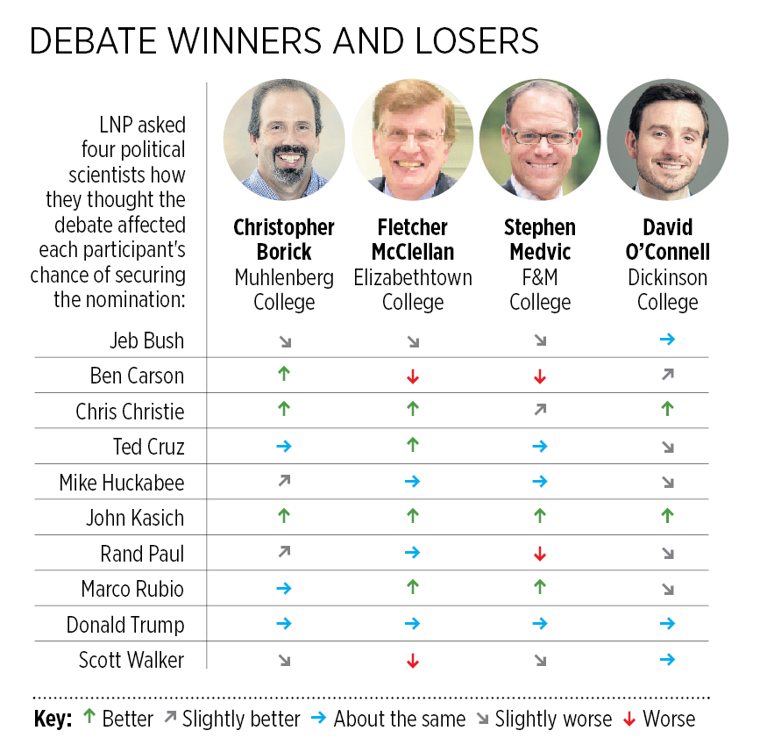 Who do you think won the GOP debate?