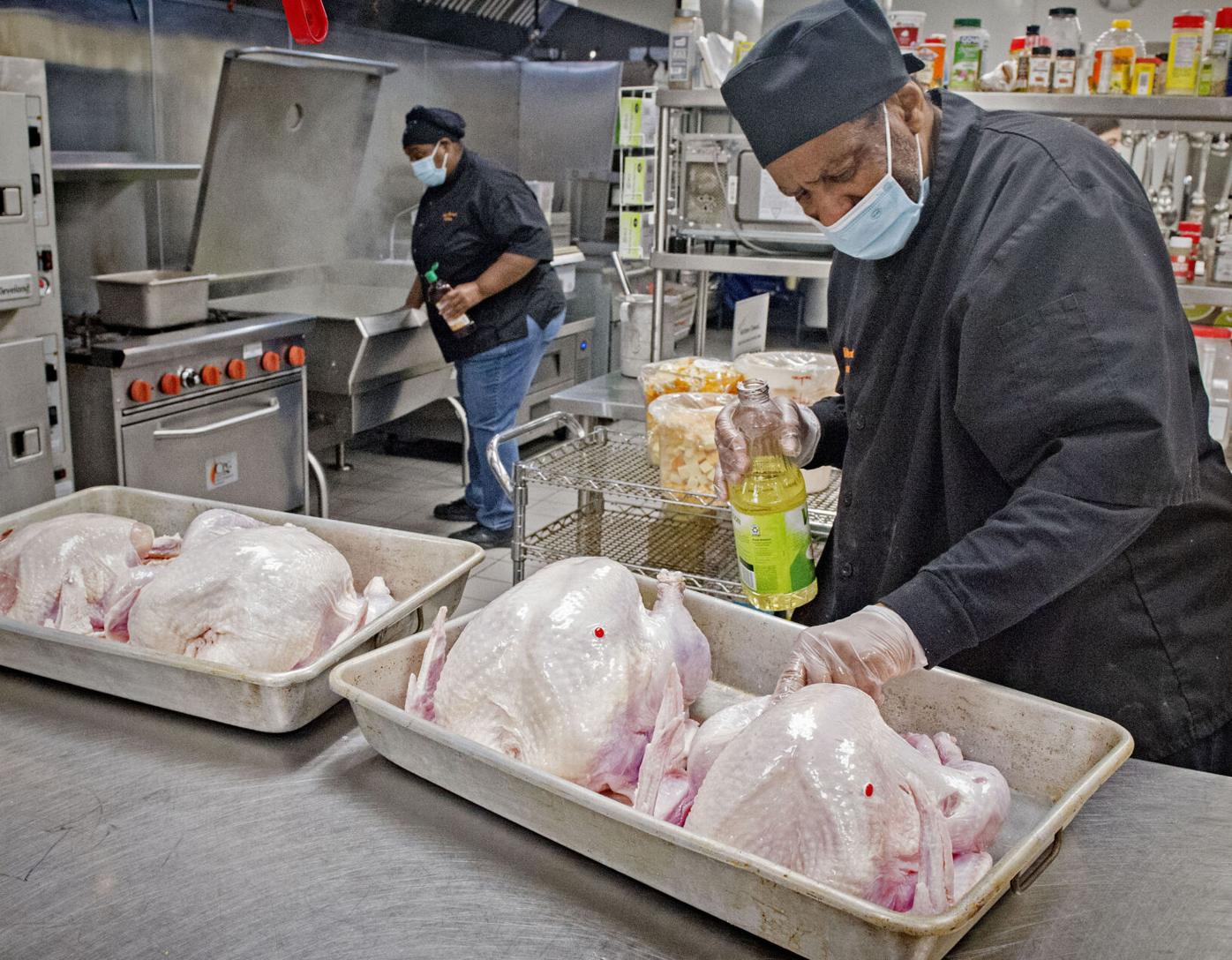 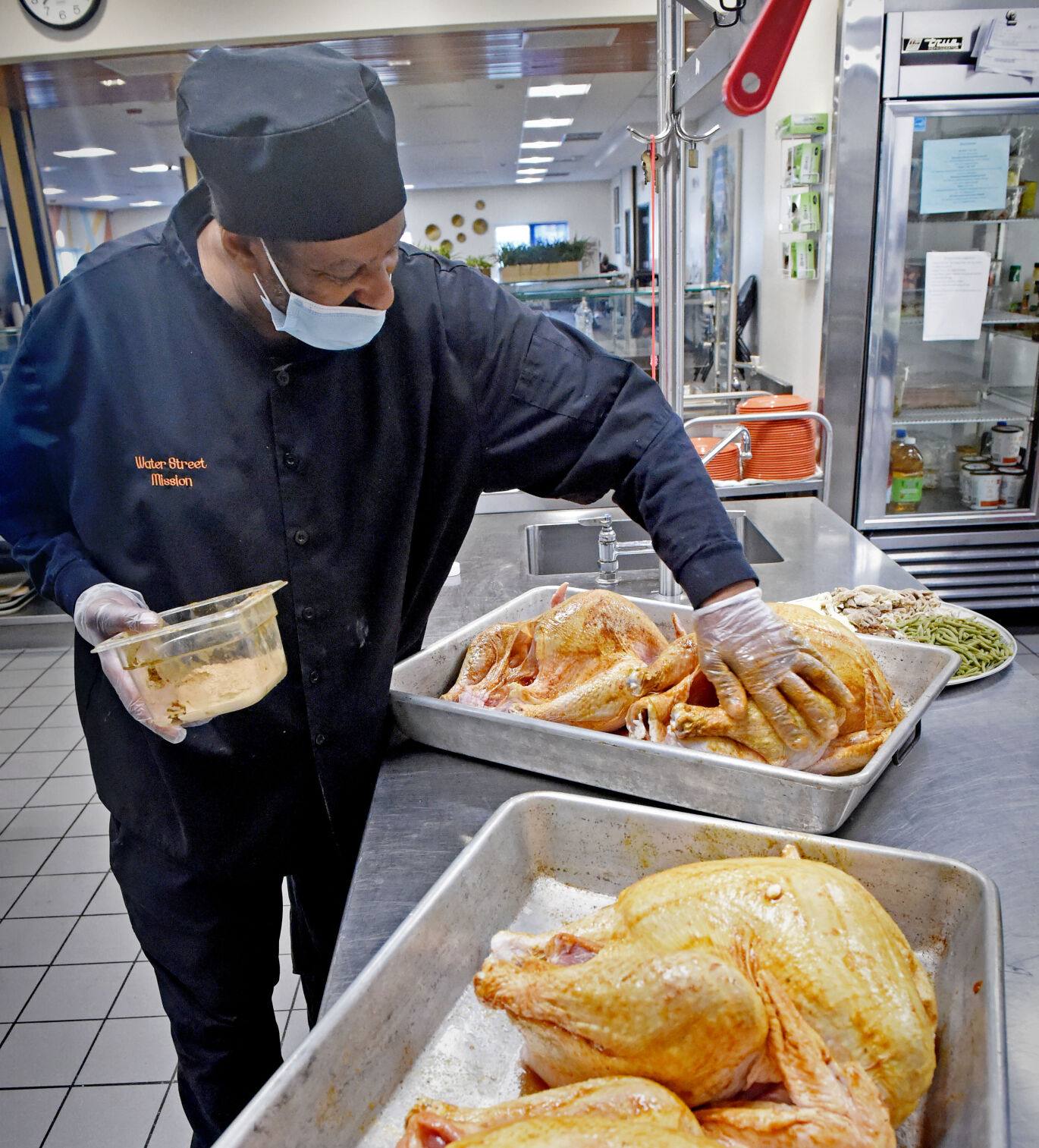 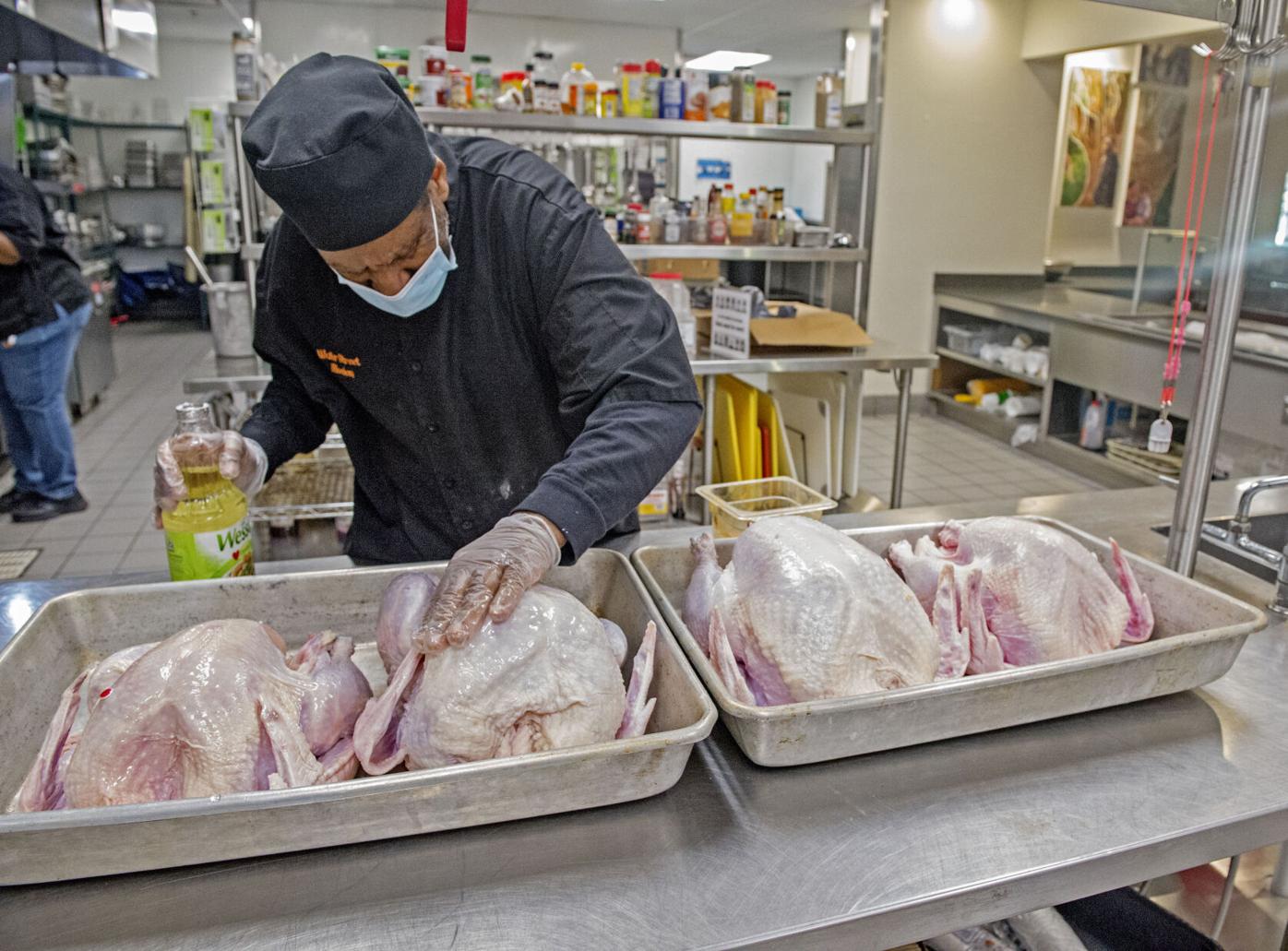 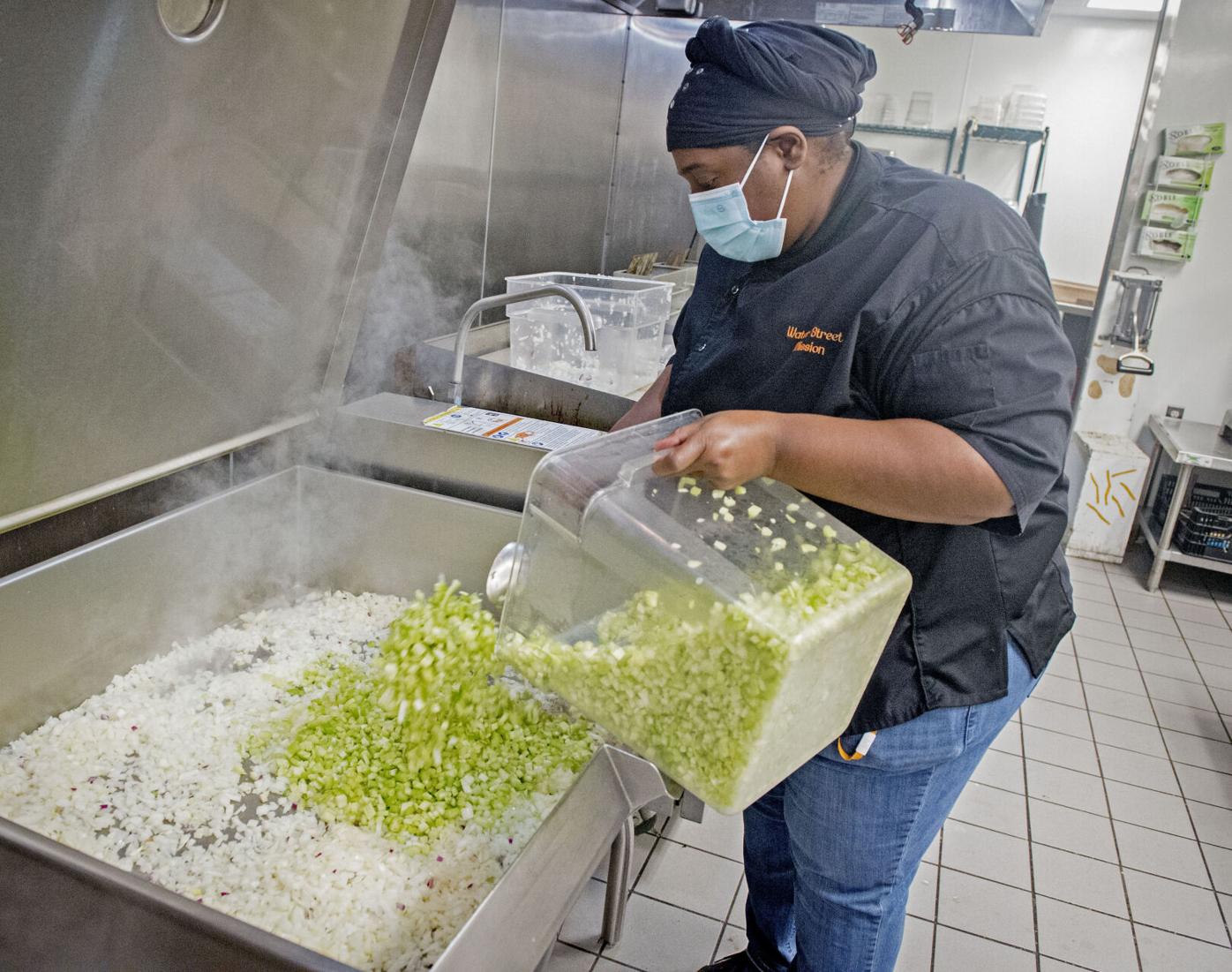 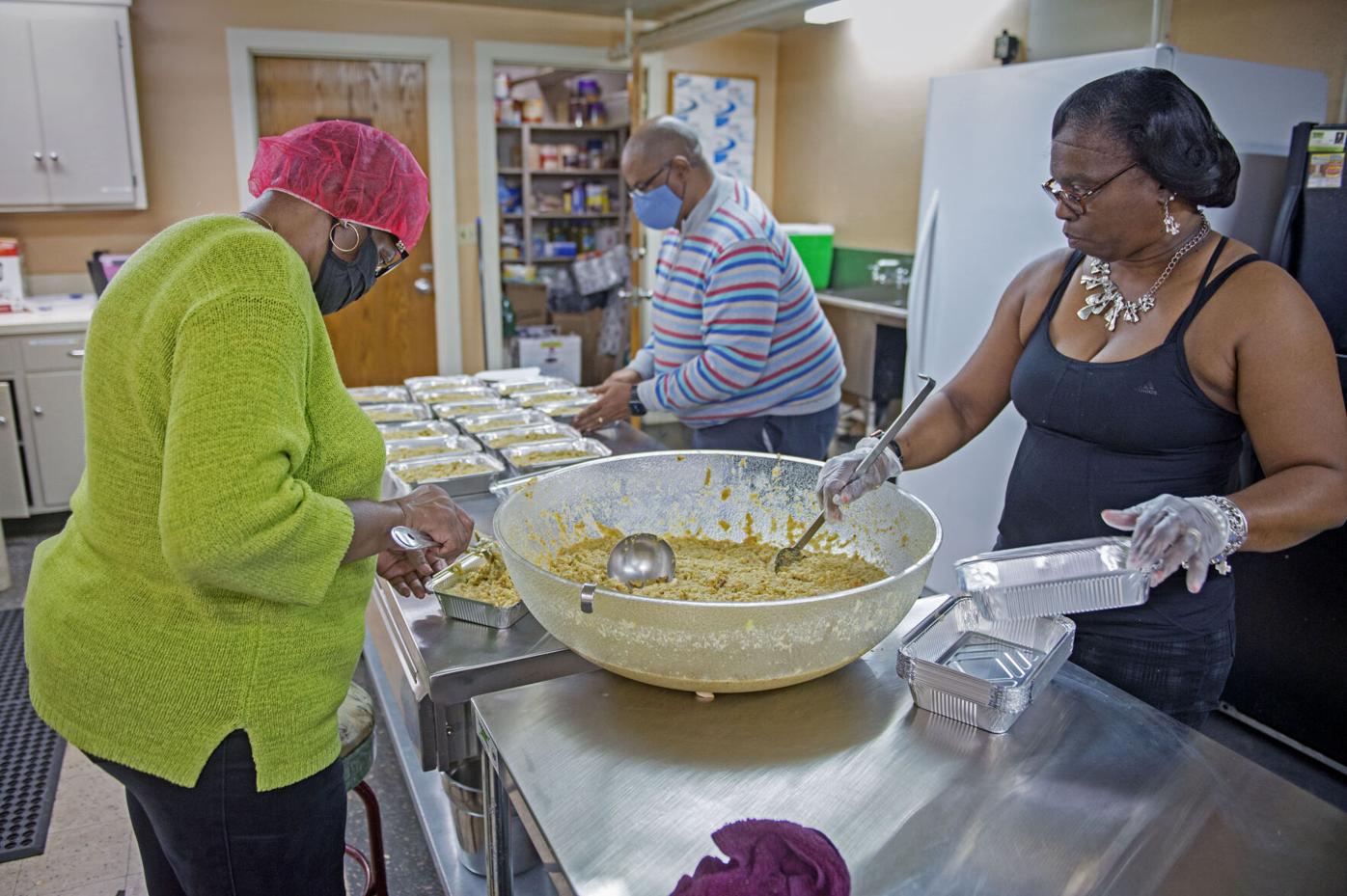 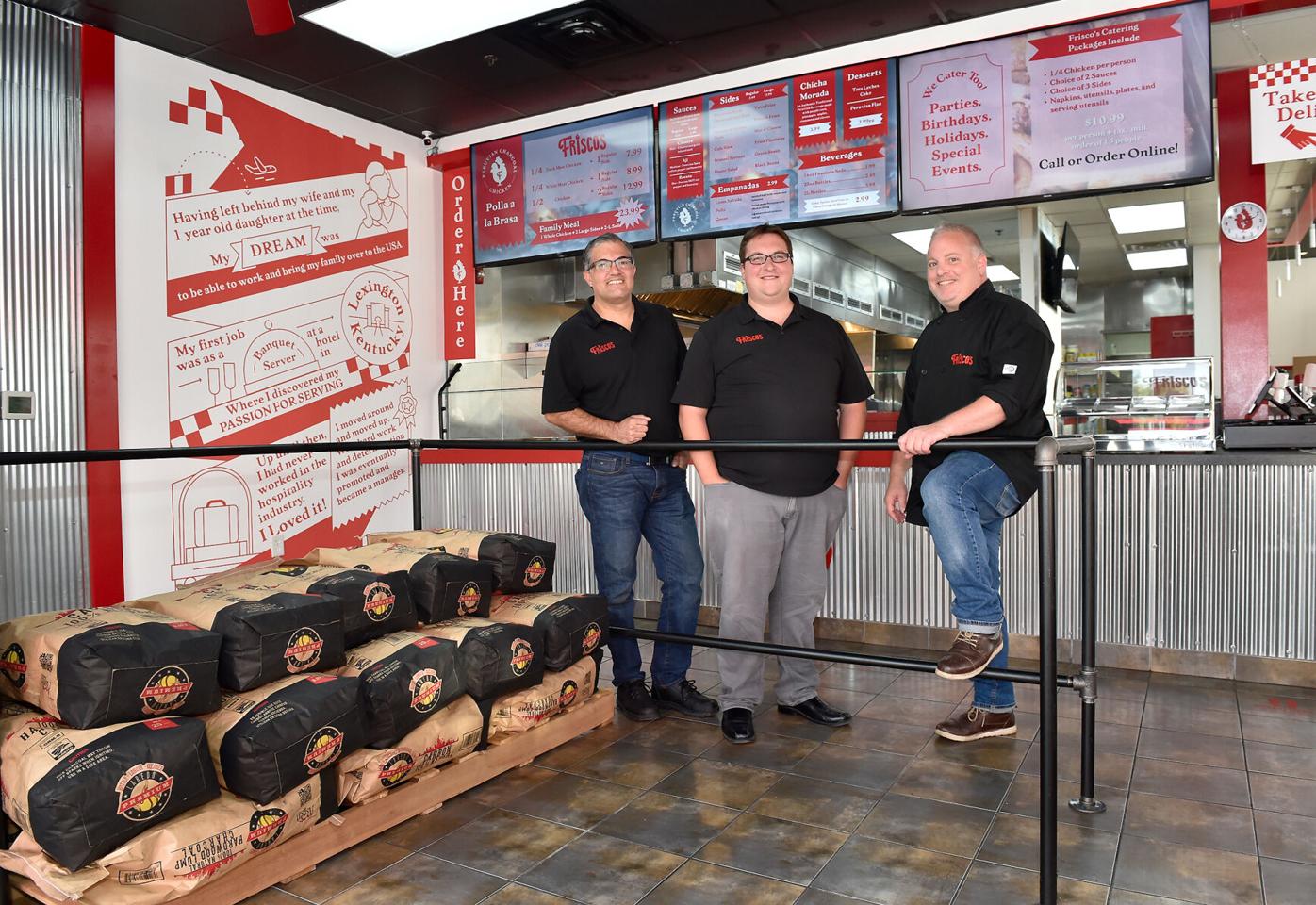 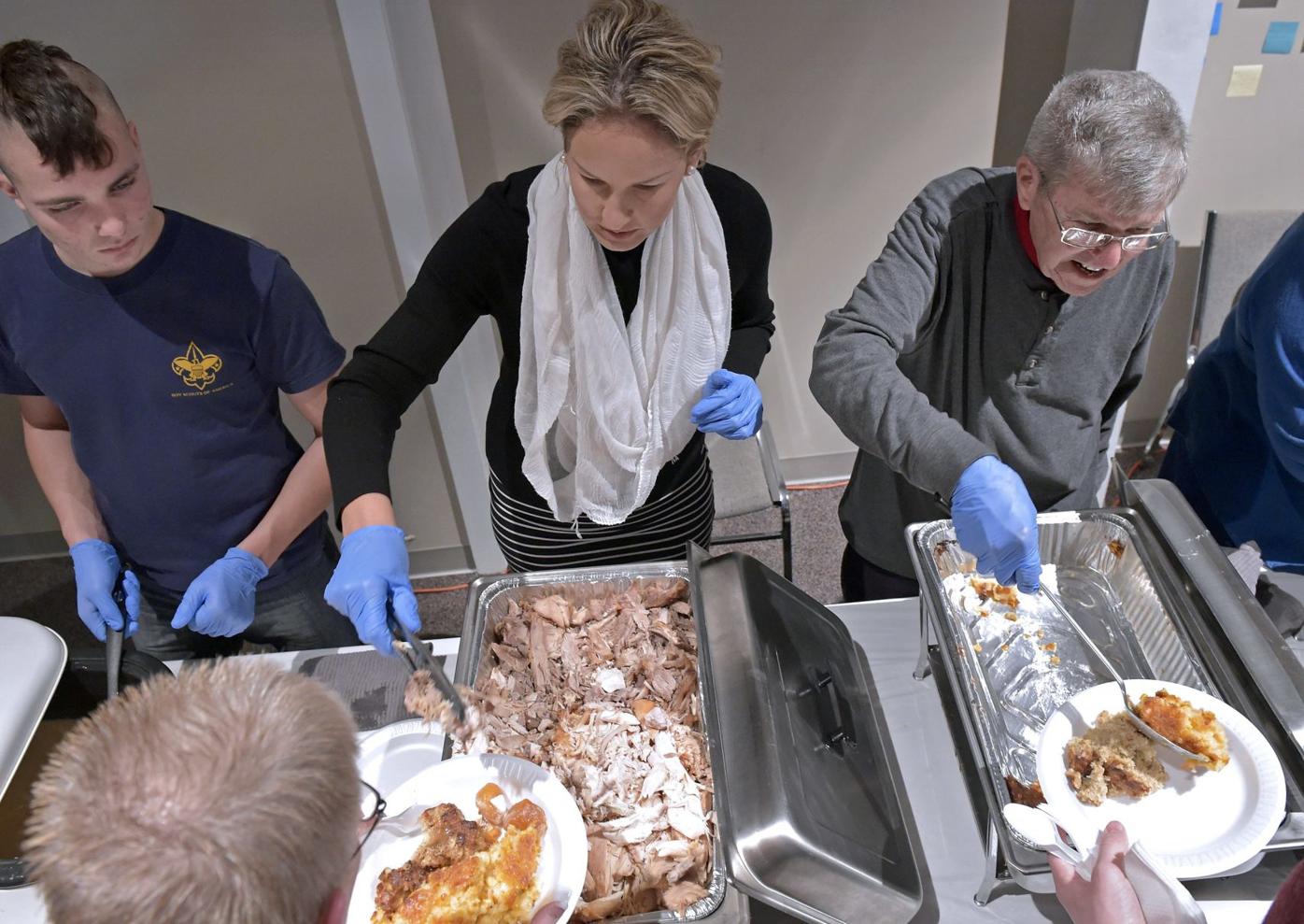 Volunteers dish out a Thanksgiving Day meal Thursday at Hosanna! A Fellowship of Christians in Lititz, in this 2015 file photo.

Some are motivated by God. Others just want to do a kind deed.

Whatever their reasons, several people, organizations and restaurants will spend some of their Thanksgiving giving back so others can also enjoy a hot meal on the holiday.

“We don’t want anyone to go hungry on such a special day,” said Sandra Forbes, outreach director at Ebenezer Baptist Church in Lancaster city, which has been giving away free meals on Thanksgiving Day for 20 years.

Forbes, 64, of Lititz, and a team of about 10 volunteers gather at the North Lime Street church the night before Thanksgiving each year to prepare a meal consisting of turkey, dressing, macaroni and cheese, green beans, sweet potatoes and cranberry sauce.

Forbes said she was first inspired to give back on Thanksgiving to help the city’s homeless and others who aren’t able to prepare food for the holiday.

For this year’s meal, Forbes and her team will cook 20 whole turkeys to feed around 350 people. The meals can be picked up and taken to-go. Some meals will also be delivered by police, firefighters and local elected officials to the homes of seniors or others who are unable to leave their houses.

“This is a way to give them a hot meal and let them know they’re not alone,” said Forbes.

Forbes and her team, who are not necessarily church members, already gather every week to cook meals on Wednesday night. They planned to gather Wednesday evening and continue cooking all throughout today until it’s time to serve.

‘These are our neighbors’: Water Street Mission

Water Street Mission has hosted large Thanksgiving meals since the early 1900s when it started as a soup kitchen.

“As a Christian organization, we’re all motivated by what Christ did for us,” said 40-year-old Matt Clement, marketing director at Water Street Mission in Lancaster city. “He cared for us when we were in need.”

With the onset of the COVID-19 pandemic, the nonprofit took on a new pandemic-safe strategy this season for the second year in the row. This year, 550 boxes of ingredients were distributed to individuals and families across the city, giving recipients the tools to make Thanksgiving dinners of their own.

A team of about 10 staff and volunteers assembled the boxes last week at the mission’s outreach center, packing in turkey, stuffing, canned vegetables and “everything that you need to make your typical Thanksgiving meal,” Clement said.

The boxes were then delivered to churches and social services agencies across Lancaster, where the food was given away on Monday and Tuesday, according to Kerry Brubaker, Water Street Outreach Center Coordinator. Anyone could receive the dinner boxes. Recipients were first-come, first-served, and the giveaway is one of the few Water Street programs where a proof of income is not required.

“If you need a Thanksgiving meal, you can sign up and we can get one for you if we have it available,” said Clement.

Clement specifically cited Isaiah 61 – “The Spirit of the Sovereign Lord is on me, because the Lord has anointed me to proclaim good news to the poor” – as a key pillar of the organization’s mission.

“We’re motivated by the actions of Jesus,” Clement said. “We’ve just grown to love caring for people in our community.

“These are our neighbors,” he continued. “When we talk about people experiencing homelessness, it’s people from all over the county. We love serving them.”

This year marks the second year that Frisco’s Chicken, a relative newcomer to food giveaways, is giving back for Thanksgiving.

A team of volunteers gathered at the Peruvian charcoal chicken restaurant in the 400 block of New Holland Avenue to prepare exactly 87 Thanksgiving meals – a nod to the number of customers the store had on its first day when it opened for business last year, said co-owner Josh Rinier, 34.

The effort is fittingly called Frisco’s Gives Back.

Thanksgiving Day begins with Rinier and a group of about 10 volunteers and family members arriving in the morning to start preparing meals consisting of a whole chicken, mashed potatoes, stuffing, gravy, corn and each of the restaurant’s signature sauces.

“It’s almost like a normal day of business for us,” Rinier said.

Francisco “Frisco” Gomez de la Torre, the restaurant’s majority owner and namesake, immigrated to the U.S. from Peru 20 years ago, Rinier said. Given that journey and being “thankful for the opportunity he’s had in this country,” Gomez de la Torre sees Thanksgiving as a special day.

“That’s one of the reasons we want to make this (giveaway) a staple as we continue to grow,” Rinier said.

Gomez de la Torre is the first of the group to arrive at the restaurant in the morning, preparing the charcoal for the Thanksgiving feast.

The tradition of giving back began after the restaurant celebrated a year of being open. Rinier and Gomez de la Torre wanted to give back to the Lancaster community for the way they had embraced the new restaurant.

“We thought, ‘let’s start a tradition,’” Rinier said. “Every Thanksgiving we’re going to give meals to those who are in need in our community.”

Meal recipients registered first-come, first-served at friscosgivesback.org, where the restaurant organizes the giveaway and other charitable causes. The meals were then picked up at the restaurant throughout the day.

Rinier said the restaurant wants to embed the giveaway as part of the restaurant’s culture, and is open to increasing the number of meals they cook each year if the demand for it is there.

Last year, Frisco’s Chicken was able to donate all but a few of the meals in their inaugural Thanksgiving giveaway. Those that were left were given to Water Street Mission.

This year, Frisco’s is on pace to give all of their meals away, having just eight meals left to donate by Saturday.

“We feel so fortunate that we’re able to do this,” Rinier said.

‘A little bit of joy’: Warwick/Lititz

The Lititz and Warwick community has a large Thanksgiving dinner of their own, hosted this year by Hosanna! A Fellowship of Christians.

“For us, this is our mission,” said Tony Blair, one of two senior pastors at the Warwick Township church. “We want to serve our community in a way that shows people in some tangible way that God loves them and we do too.”

The dinner is sponsored by the Warwick/Lititz Ministerium, a gathering of church leaders from about 30 places of worship in the Warwick and Lititz area. Hosanna! coordinates the event and provides about half the food and volunteers, and the rest is supplied by other area churches, people and businesses.

“People tend to get depressed around holidays,” said Blair, 57. “We want to give them at least a little bit of joy.”

Though the dinner was hosted at St. James Catholic Church last year due to pandemic concerns, the event has otherwise taken place at Hosanna’s Green Acre Road campus for the past several years. A variety of other churches have also hosted the dinner over the past two decades.

Many of the people served at the dinner are economically distressed, and others are disabled or otherwise unable to physically prepare food, Blair said. Some, he added, are simply lonely, without anyone to share their Thanksgiving Day with.

Blair said the idea for the annual dinner was conceived by a former Lititz Borough mayor more than 20 years ago and has grown from about 400 people in their first year to around 1,300 in 2019. That’s about the same number of people the church is expecting to feed this year, whether they eat in-person at the church, pick up their meals to-go or have food delivered to their homes.

Putting together the meals is a true community effort, with help from volunteers across the Warwick and Lititz area. About 50 turkeys were donated to the cause this year by individuals and businesses in the area, many provided by Knight and Day Diner in Manheim Township and Zigs Bakery & Café in Warwick Township.

“I’m rather proud of our folks at Hosanna! for doing the lion’s share of this, but we’re grateful that it’s a collective effort,” Blair said.

The event itself sees about 50 volunteers working at any given moment, most coming and going throughout the day to help feed others.

Blair said seeing people come together to give thanks “is probably something that our world needs and our community needs.”

“I’m sure there’ll be lots of people expressing thanks in their homes,” he said, “but the fact that there could be hundreds or even over a thousand people who in one way or another come together to say thanks together is really meaningful in a polarized culture.”

The dinner itself, Blair said, is really just a symbol.

Being together with others around Thanksgiving can provide something a little more meaningful: a day with joy and love.

“We can’t fix everything,” he added, “but this is something we can do.”

Breezy, clear weather is expected this week in Lancaster County, just in time for Thanksgivi…

A pre-Thanksgiving pep talk from our food writer

This is the wellness check-in portion of the pre-Thanksgiving show. How are you all doing?

Stacked tall, hundreds of boxed turkeys sat Thursday on rolling carts outside of a refrigera…

Lancaster County churches serve, deliver meals to those in need on Thanksgiving