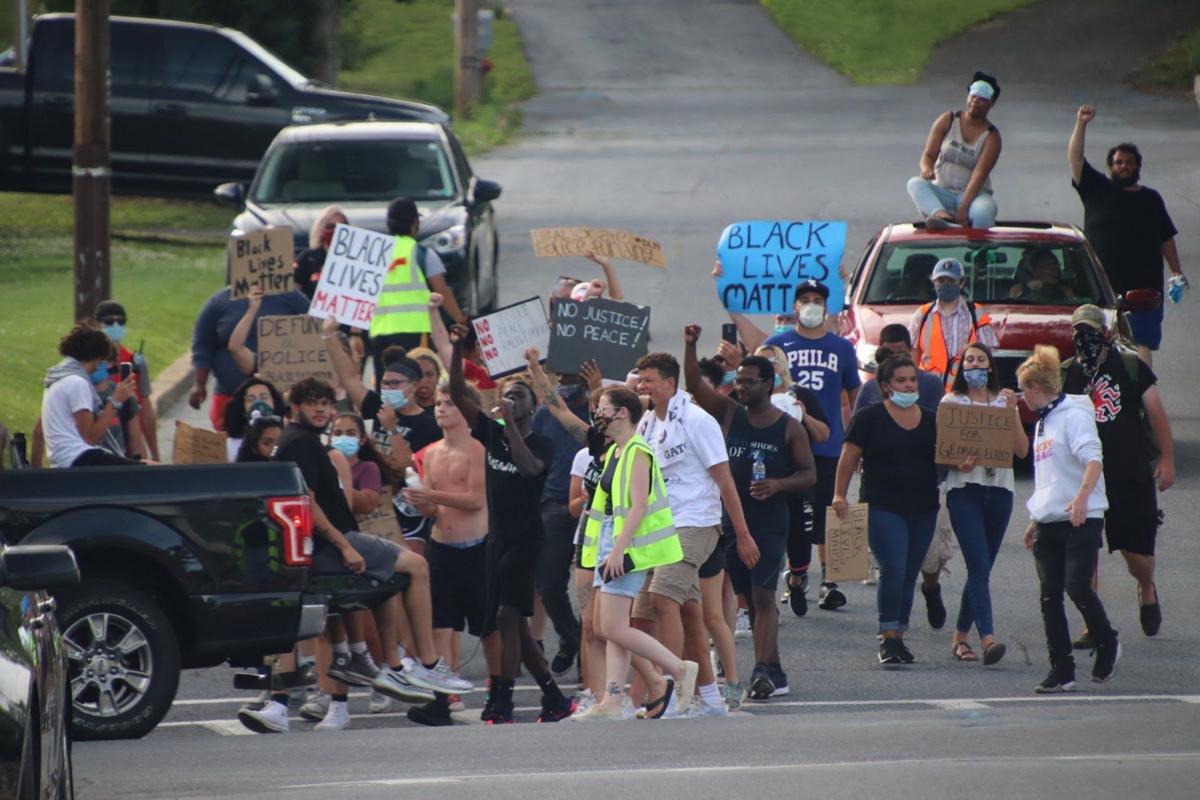 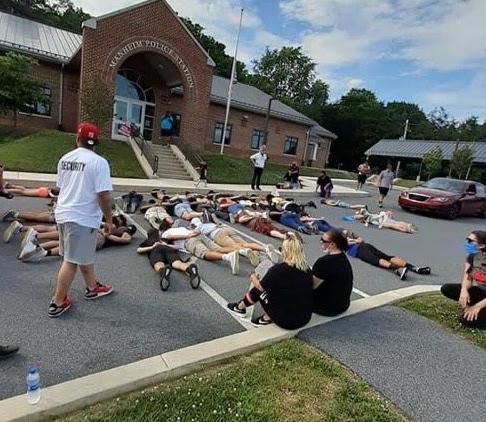 Protesters lay in front of the Manheim Borough police station on Tuesday, June 23, 2020.

Protesters lay in front of the Manheim Borough police station on Tuesday, June 23, 2020.

Protesters say they were almost hit by a vehicle and met with racial slurs, spit and a man wielding a firearm while marching through Manheim Borough on Tuesday night.

In videos posted to social media of an incident from the evening, a man is seen standing in his driveway with a gun in hand and yells, "All lives matter." He and a few protesters on the street shout back and forth to each other, and protesters can be heard yelling "Keep marching," in an effort to deescalate the tense situation.

In the video, the resident does not point the gun at protesters or threaten to shoot, though a protester who spoke with LNP | LancasterOnline said the man cocked his firearm. Manheim Borough Police Chief Joseph Stauffer said he didn't receive any reports related to the incident, though he was aware of it.

Peaceful protesters were met with fire arms in Manheim Pa. This is what hate is. We were marching peacefully. pic.twitter.com/JCu9WMWZOI

Several protesters told LNP | LancasterOnline that later in the evening, a vehicle drove through the crowd and the driver slapped a protester. Stauffer said he didn't receive any reports related to that incident either.

The protester who was slapped plans to report the incident to police, said 22-year-old DaShaun Neville, who organized the protest.

The vehicle didn't hit any of the protesters, Neville said, but it was close.

Police are currently looking into complaints of protesters stopping vehicles, Stauffer said. No charges have been made, though after an investigation is complete, police will be consulting with the Lancaster County District Attorney's Office about potential charges.

Stauffer said the police department didn't receive any other reports related to the protest.

What are police talking about on their encrypted radios? The public may soon find out [update]

Taylor Enterline, 20, has attended several marches in Manheim, her hometown, since the beginning of June. She said Tuesday's protest was different from the rest.

"We had a little more force to us," she said.

She described the past protests in Manheim as "low-key and reserved." But on Tuesday, protesters took to the streets and chanted "Wake up, Manheim." They knelt and laid on the ground outside of the Cat's Meow's outdoor dining patio.

Instead of receiving honks of solidarity from passers-by like they've experienced while protesting in Lancaster, Enterline and Neville said protesters were spat on and called racial slurs by other residents throughout the evening.

After incendiary devices were found near Lancaster City Hall in May, police search for person of interest

Enterline said she knelt in front of the man carrying the firearm, along with other protesters.

Neville said Manheim's response to the protests was the "worst by far" when compared to the other communities that have had protests in Lancaster County.

After protesters marched past the resident holding a firearm, Enterline said they regrouped at Market Square. She said she was shaken and angry, and needed to take a step back.

County commissioner calls for bust of Christopher Columbus to be removed

"I had to really feel what I was feeling," she said. "I couldn't push them aside. I've done that my whole life."

She added that her feelings need to be seen and not ignored by her neighbors in Manheim.

"By choosing to be blind (to my feelings), you are choosing not to see the pain of your neighbor," she said.

By the end of the evening, Neville said he was "emotionally and physically drained." He was disappointed in his hometown.

Neville said he's poured himself into the community for years as a football coach. He's known in the community.

Pepper spray and riot gear: a look back at what happened on day 2 of Lancaster’s protests

Seeing the hateful response from the community was "gut-turning," he said.

Enterline said protests in Manheim Borough will continue, and that its residents need to "wake up."

"I'm done being quiet and hiding my pain," she said.

‘We come in peace’: Protesters gather in Elizabethtown, Millersville and Strasburg

Dozens of religious leaders gathered outside Columbia Borough Hall to protest the death of George Floyd and racism in America Thursday afternoon.

Some Manheim Township residents are boycotting Skyline Pool after staff called the police on a Latino and Black family on Friday, expressing t…