A new study sought and paid for by the state Department of Agriculture explores moving more dairy and livestock farming to western Pennsylvania to relieve environmental stresses mounting in Lancaster County and central Pennsylvania.

The study, performed by a Penn State team of agriculture engineers, economists and sociologists, also looks at trucking excessive and polluting manure from this region to the western part of the state.

The conclusion: Armstrong, Indiana and Westmoreland counties have ample room for livestock farms and to spread manure safely, but any expansion would not be easy because of a current lack of agriculture services and poor roads. 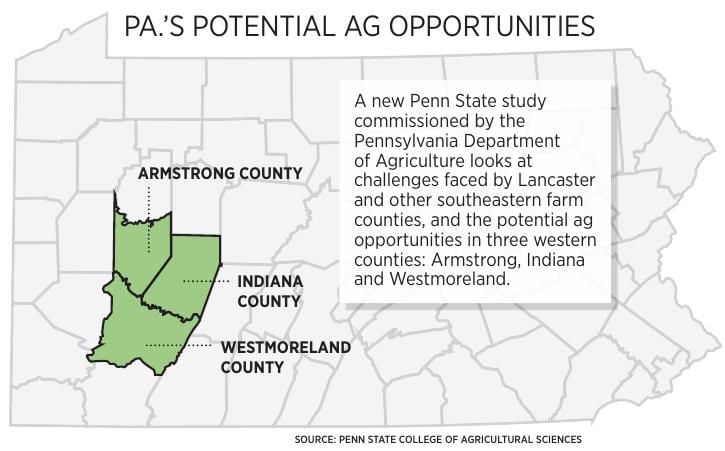 To some, the study raised the question of whether a potential new wave of tougher federal water-quality regulations threatens Lancaster County’s long farming tradition.

“Water-quality limits for the Chesapeake Bay set by the Environmental Protection Agency could lead to a downsizing of the livestock industry in the (Susquehanna) watershed,” noted  David Abler, Penn State professor of agricultural, environmental/regional economics and demographics, and one of the study’s authors.

There are increasing concerns that more restrictive federal regulations are being aimed at farmers in the Susquehanna River watershed by EPA. The three western Pennsylvania counties are in the Ohio River watershed and have not been targeted for nutrient reductions.

Will Lancaster County farmers be banned from spreading manure in winter?

Pennsylvania is lagging in its promise to reduce nutrients flowing down the Susquehanna River and polluting the Chesapeake Bay, and EPA has warned it may take matters into its own hands.

But they say farming here is indeed threatened if current pollution is not reined in.

But concerns that farming and local suburban communities will face added sanctions as part of the bay cleanup push are real.

The state Department of Environmental Protection recently sent a presentation to several counties, including Lancaster, that are assuming control over stream-cleanup measures.

DEP said this about what new EPA sanctions could mean for a majority of farms and what can run off their fields:  “More than 98 percent of Pennsylvania farms do not have to get federal discharge permits. That could change!”

And local communities may have to further rein in stormwater runoff.

“Seventy-five percent of developed areas in Pennsylvania are not subject to the federal MS4 stormwater management regulatory program. That could change!” DEP said.

“I think there is a real possibility that EPA could change how farming, agri-business and development are done here if we don’t meet our goals for improved water quality,” said Allyson Gibson, coordinator of the new Lancaster Clean Water Partners group to help Pennsylvania meet its water-quality goals in Lancaster County.

Added Jenna Mitchell, director of the Alliance for the Chesapeake Bay’s Pennsylvania office, located in Lancaster, “It is certainly possible that increased regulation, whatever that may be, could impact the economics of farming in the Susquehanna watershed.”

When DEP spokeswoman Deb Klenotic was asked about the effects of possible stepped-up EPA regulations, she replied  in an e-mail, “The future of farming isn’t something DEP can speculate on.”

“Pennsylvania is currently drafting a Watershed Implementation Plan that outlines the suite of agricultural conservation practices it will implement to achieve the Chesapeake Bay restoration goals.”

A new $867 billion Farm Bill passed by Congress this week has plenty of programs that will affect Lancaster County’s farmers who produce milk,…

The latest ripple effect from Lancaster County’s dairy crisis has shown up at the Elizabethtown Fair.

No "doom and gloom," but a challenging transition for local farming [opinion]