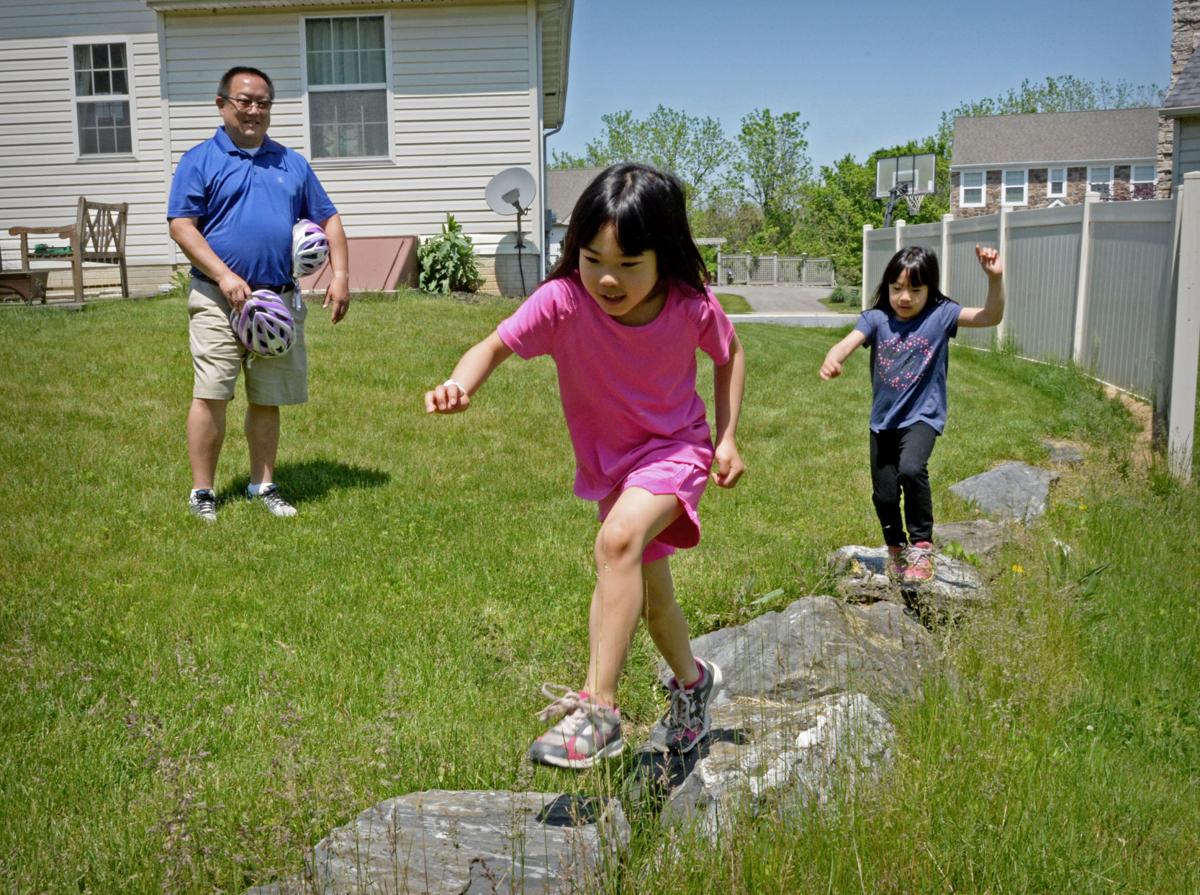 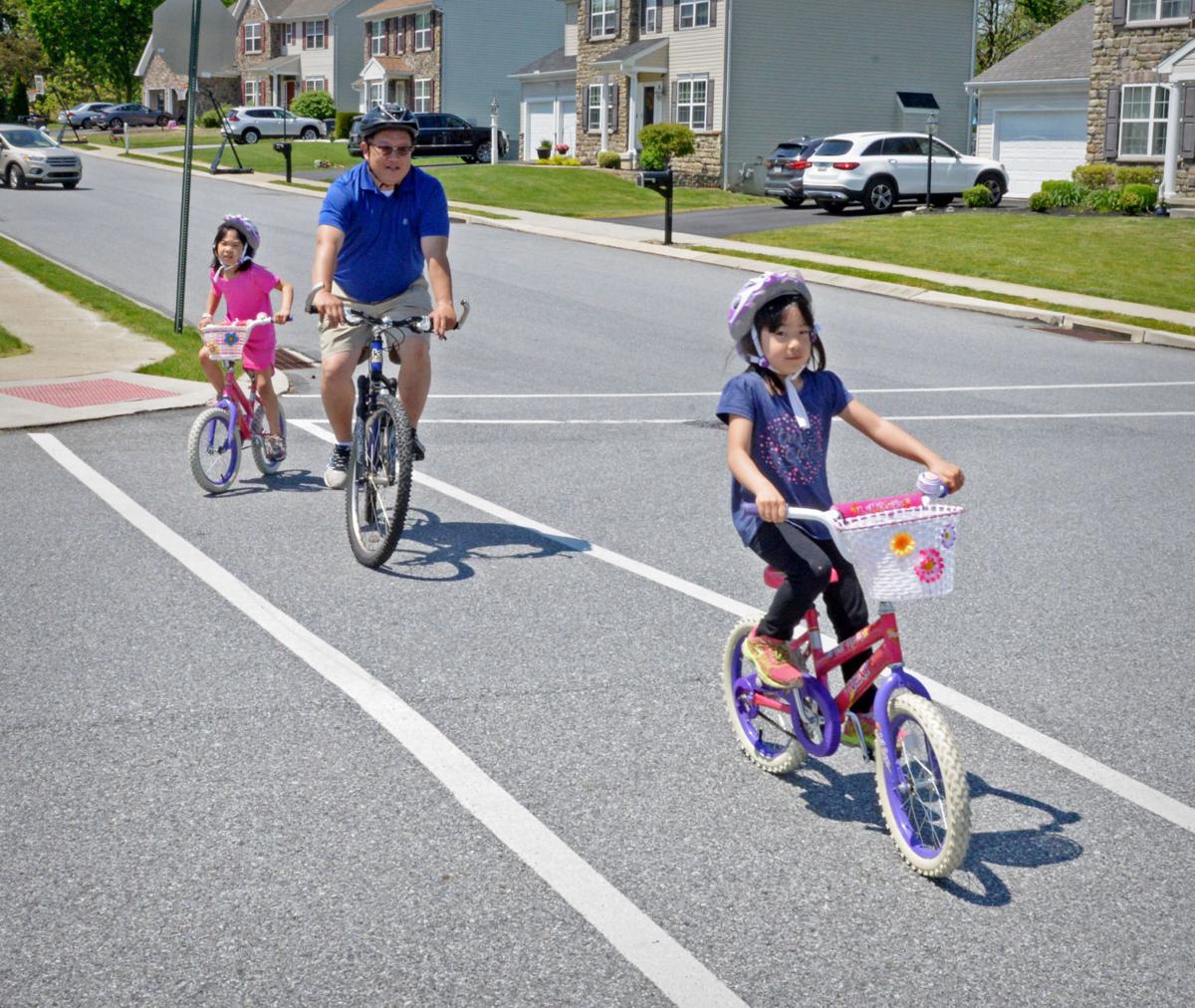 Tim Leung rides bike with 6-year-old daughters, Victoria, left, and Noelle, near their East Lampeter Township home on May 25, 2020. 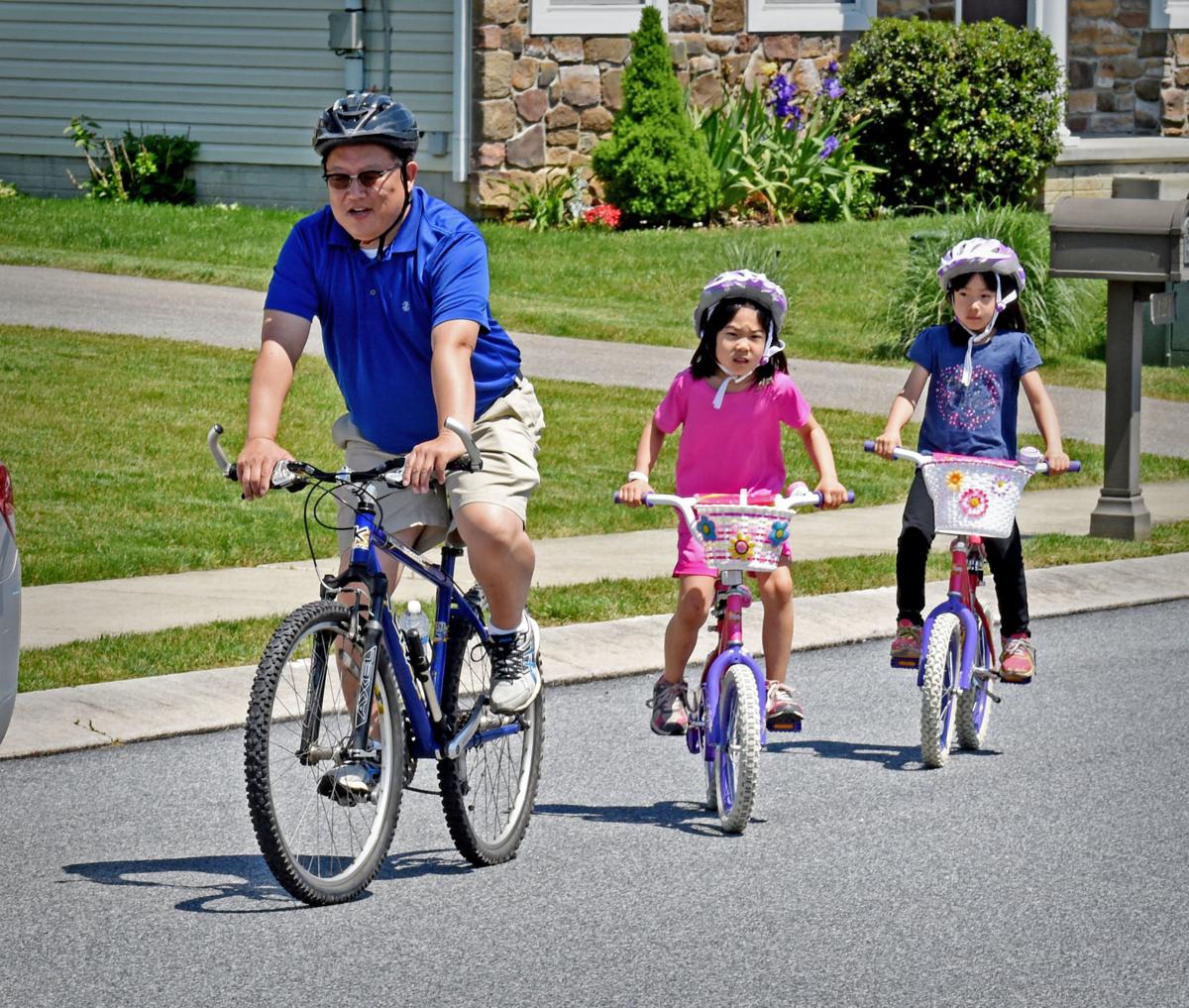 Tim Leung, left, rides bike with 6-year-old daughters, Victoria, center, and Noelle, near their East Lampeter Township home on May 25, 2020. 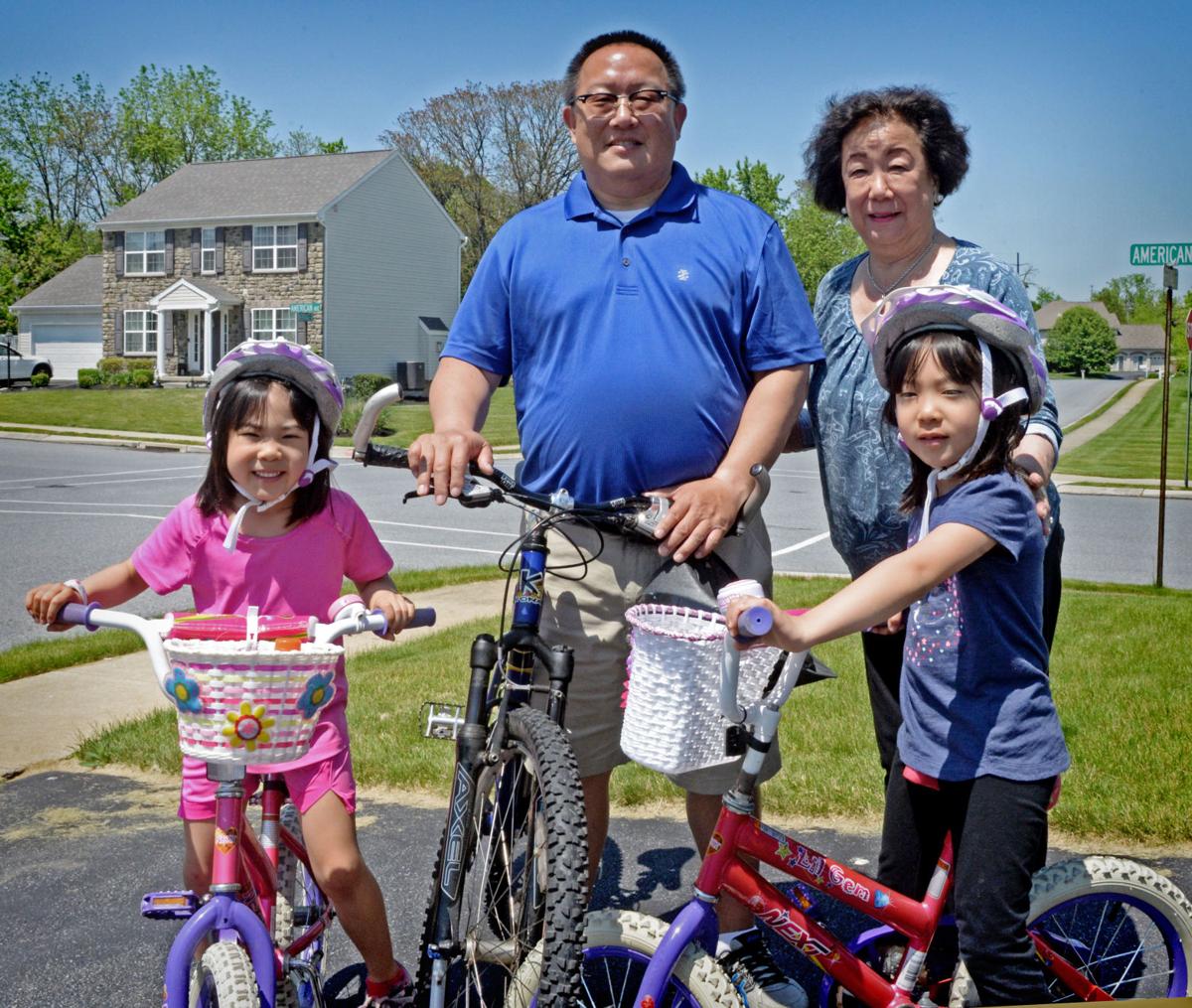 Tim Leung with his mother, Lucy Leung, and 6-year-old daughters, Victoria, left, and Noelle, outside his East Lampeter Township home on May 25, 2020. 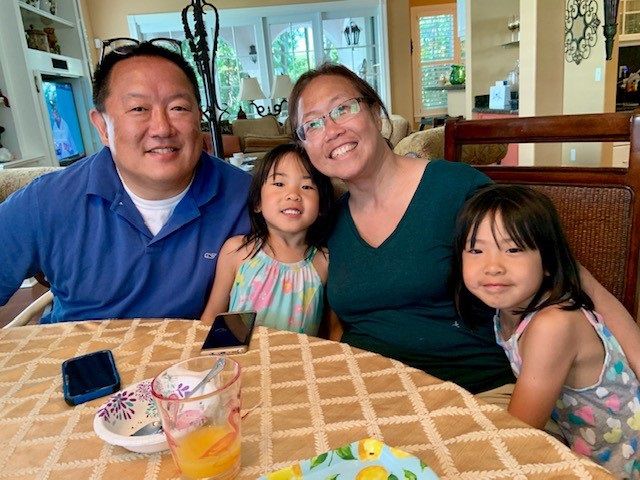 The Leung family — from left, Timothy, Victoria, Lun and Noelle — visits relatives in Florida in this undated photo. 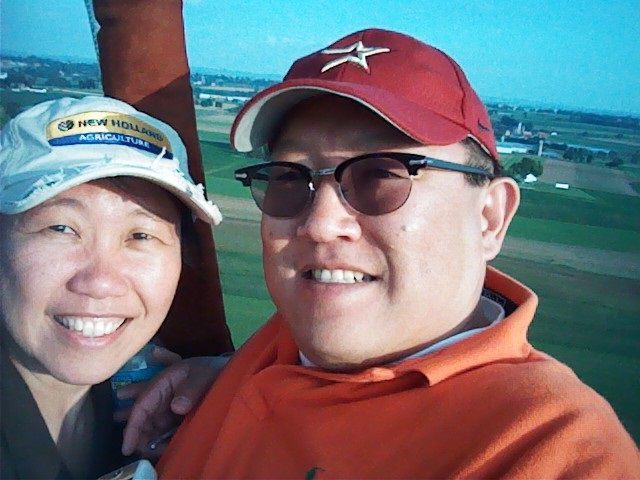 Lun and Timothy Leung ride in a hot air balloon in this undated photo.

Tim Leung rides bike with 6-year-old daughters, Victoria, left, and Noelle, near their East Lampeter Township home on May 25, 2020.

She came up from the basement and told her husband, Timothy Leung, she needed to go to the emergency room.

Leung, 54, dropped Lun off outside Penn Medicine Lancaster General Hospital on the afternoon of Friday, April 3. He had no reason to think he was seeing her alive for the last time.

Both parents work in nursing homes, then one got COVID-19: How this Manor. Twp. family relied on God during the pandemic

This Father’s Day has new significance for Leung, who suddenly is raising 6-year-old twin girls on his own. Cheerful and shy, Noelle and Victoria bring joy to his life as he tries to fill the void left by their adoring mother.

“I guess I’m still in disbelief that she’s not here,” he said.

An accountant in the pricing department at Case New Holland, Lun took medication for scleroderma, a connective tissue disease, but she otherwise had been healthy, regularly exercising at the YMCA and walking on a treadmill at home.

At the hospital, Lun tested positive for COVID-19, and doctors decided to keep her overnight.

“What are they going to do with you now?” Leung asked in a text late that Friday night.

Leung never got a return text, but he didn’t think he had any reason to worry that his wife’s life was in danger.

On Saturday evening, April 4, Leung spoke with a nurse, who told him Lun was stable and in good spirits.

“Miss you, dear,” he texted before turning in.

Late that night and into the early morning of April 5 as Leung slept, Lun suffered a setback, and doctors fought for her life.

At 1:30 in the morning, Leung’s phone woke him. A doctor told him his wife had died.

Leung is an information systems technician for UPS near East Petersburg. He follows Formula One racing and enjoys going to fine steakhouses with friends, some from the Baltimore area where he grew up and went to college.

Leung and Lun met about 10 years ago. They married in August 2011 and became parents in April 2014. When the girls were infants, he and Lun shared many parenting duties, although Lun did much of the heavy lifting.

“She’d wake up two or three times” for feedings, he said. “I probably slept through a lot of them.”

Leung said he remembers changing only a few diapers.

“Lun was definitely the driver in their relationship,” said Leung’s mother, Lucy Leung, 78, who came from Baltimore in March to help the family after the girls’ school closed. “Tim was saying, when she passed away, that she did everything. She was the supermom.”

Lun valued both work and having fun. The family, for example, got a season pass at Dutch Wonderland, a nearby amusement park for children. And even though Lun had never ice skated, she had the family go to a rink to give it a try.

Leung now looks for ways to have fun with the girls. They enjoy building complex Lego sets together and riding bikes through their quiet neighborhood of recently built homes.

A favorite meal is their father’s grilled cheese sandwiches.

Leung, who is easy going and patient with his daughters, is glad they have each other as best friends.

“They seem so most of the time,” he said. “They like doing whatever the other is doing. Hopefully, there’s two of (the same toy or clothing item.) Otherwise, they fight over it.”

Leung is learning how to discipline the girls, a responsibility that had usually fallen to Lun, Lucy Leung said.

He has other duties to learn, too. He recently realized, for example, that the girls were growing out of their clothes and he would have to buy them outfits.

He also trimmed their hair, another first. He sat them outside on a stool.

“The bangs came out pretty straight and even,” Lucy Leung said.

Andy Leung, Leung’s 52-year-old brother who lives in Wilton, Connecticut, said he believes Leung is up for the challenge of raising the girls alone and on a single income. (Lun’s coworkers established a GoFundMe.com fundraiser for the family.)

He said his brother tends to believe “that things work out, and they’ll figure it out.”

Extended family continues to be supportive. Every night at 7:30, for instance, Andy Leung’s daughter, Paige, 12, sees her 6-year-old cousins by video, and their chattering can go on for an hour.

Lun was her son’s heart and soul, Lucy Leung said, and “the tears can come pretty easily.”

Sometimes the girls crawl into their father’s bed and ask about mommy.

Leung tells his daughters what he told them a couple of days after their mother died. She went to heaven, he says. She is where the bright light in the clouds are, and she is watching over them.

It’s an answer they still try to comprehend.

At the dinner table recently, the girls brought up memories from the memorial service. They mentioned touching their mother’s hand and hair and pushing on her shoulder to try to wake her up.

“They said, ‘We touched her, and she didn’t open her eyes,’” Lucy Leung said.

Before going to bed, the girls may ask to watch a video tribute from the memorial service. It may prompt them to say, “My mommy is in heaven.”

“But they don’t say it in a sad way,” Leung said. “They’re pretty resilient through it all.”

Their father, perhaps, has set the example.

Upper Leacock Township stands by decision not to open pool

As it gets the OK to move to green, Lancaster County has state's 3rd highest rate of new coronavirus cases

COVID-19 infection came to many of our Lancaster County long-term care facilities, leaving a trail of illness and death.

Over the past decade, I have questioned everything — my perspective, my biases, my insecurities, my friendships, my loyalties, my silence, my voice, my prickliness, my faith, my career. But I have never questioned building a home with the man who delivers dad jokes with the same alacrity as he does a lecture on photosynthesis.

As of Thursday, there were more than 2.1 million cases of COVID-19 and more than 118,000 deaths from the illness in the United States, accordi…

'I've already contacted my hairdresser for a pedicure': Readers share their plans once Lancaster County moves to 'green' phase

A nurse battled a COVID-19 outbreak at Luther Acres nursing home. Then she fell ill.

Registered nurse Brynn Faix got called in to Luther Acres on her day off for a burgeoning crisis she feared was an outbreak of the coronavirus.

President Donald Trump declared a national emergency over the coronavirus on March 13.

There’s a lot to like about working remotely from home during the COVID-19 pandemic, says Kara Kalupson.