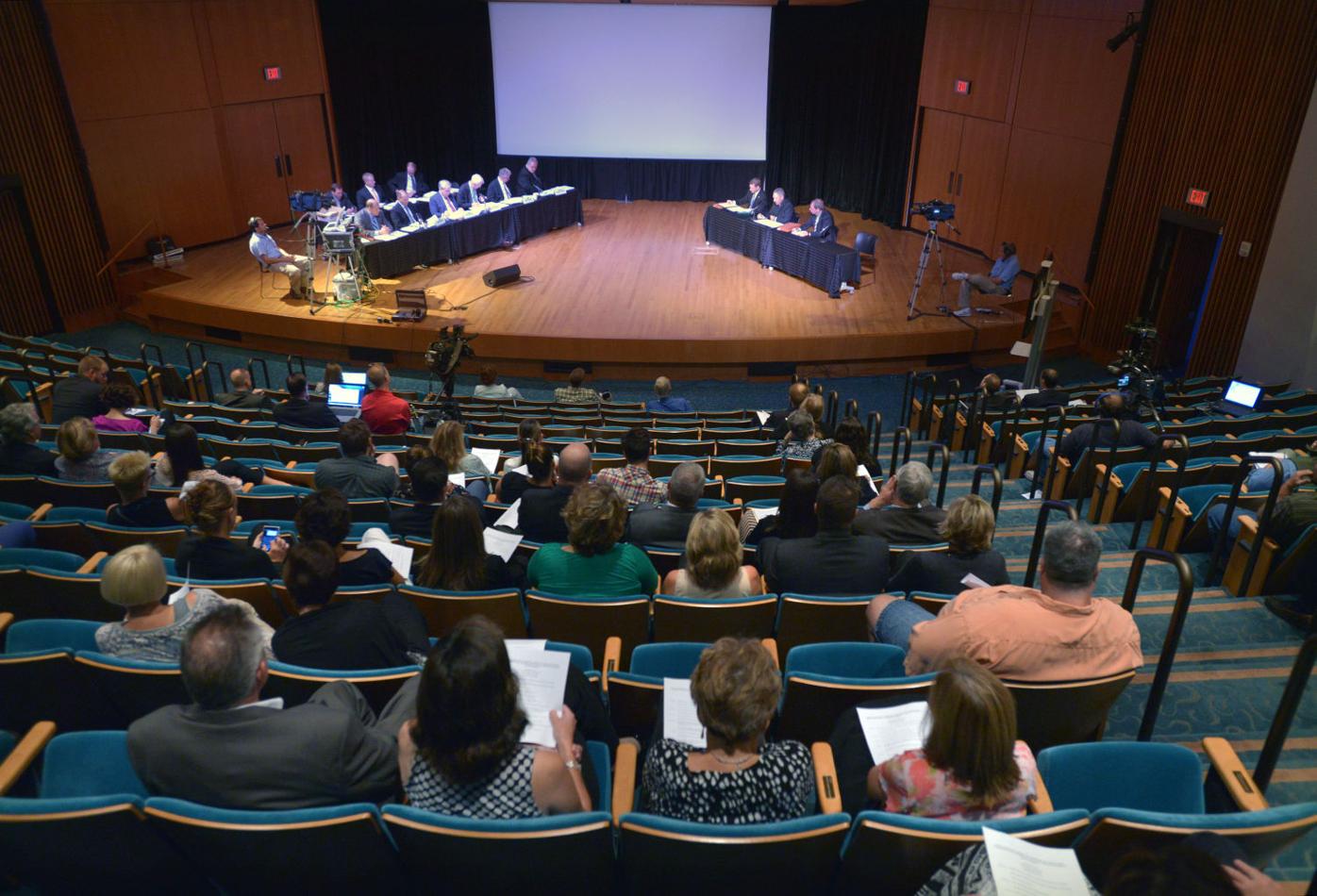 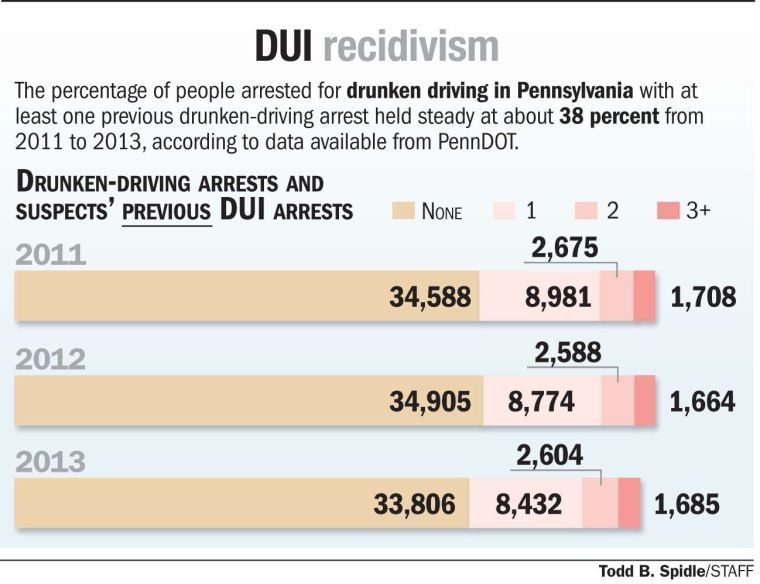 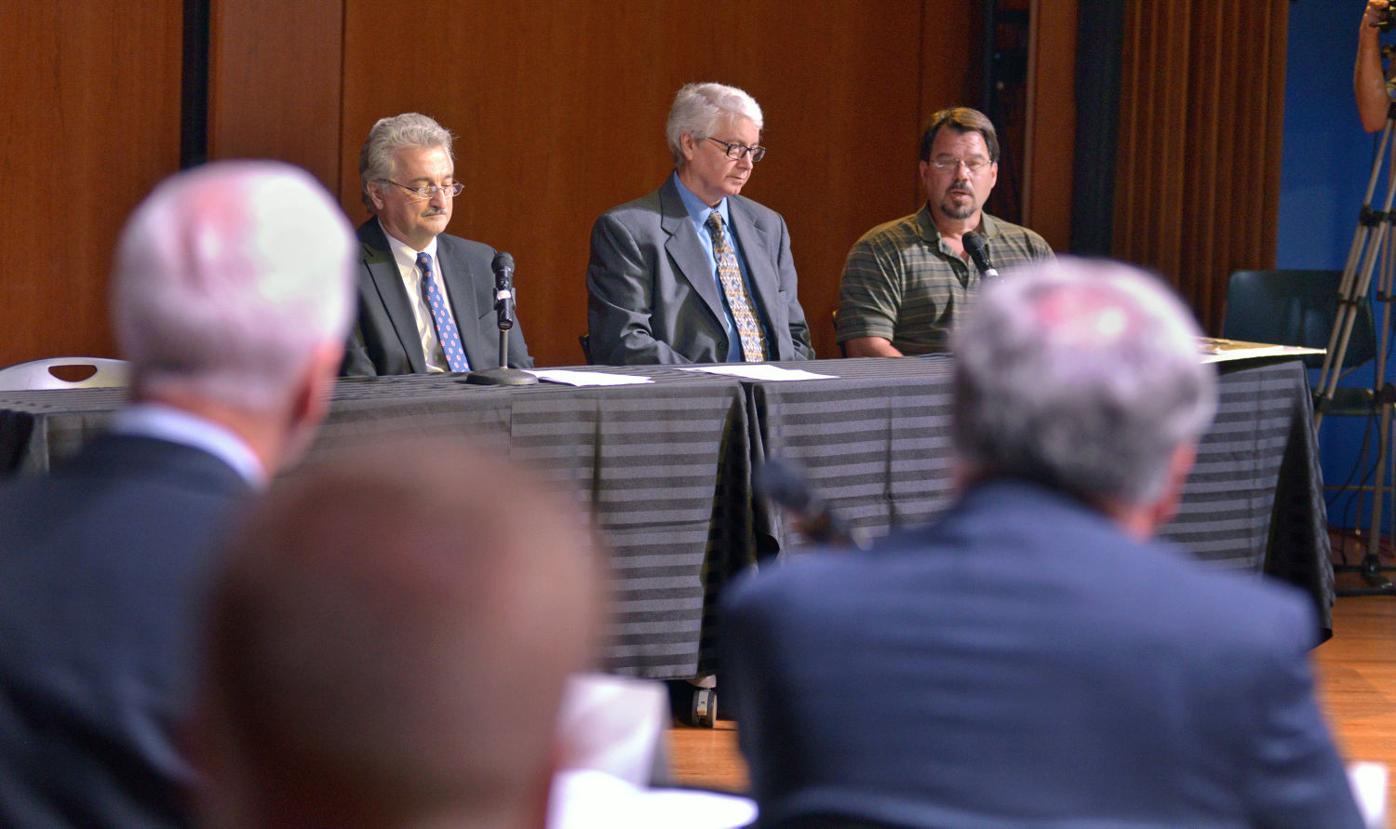 Chris Demko, Patrick Crowley and Glenn Rudy (left to right) share their stories of the DUI deaths of their children at the hearing held at the Ware Center. 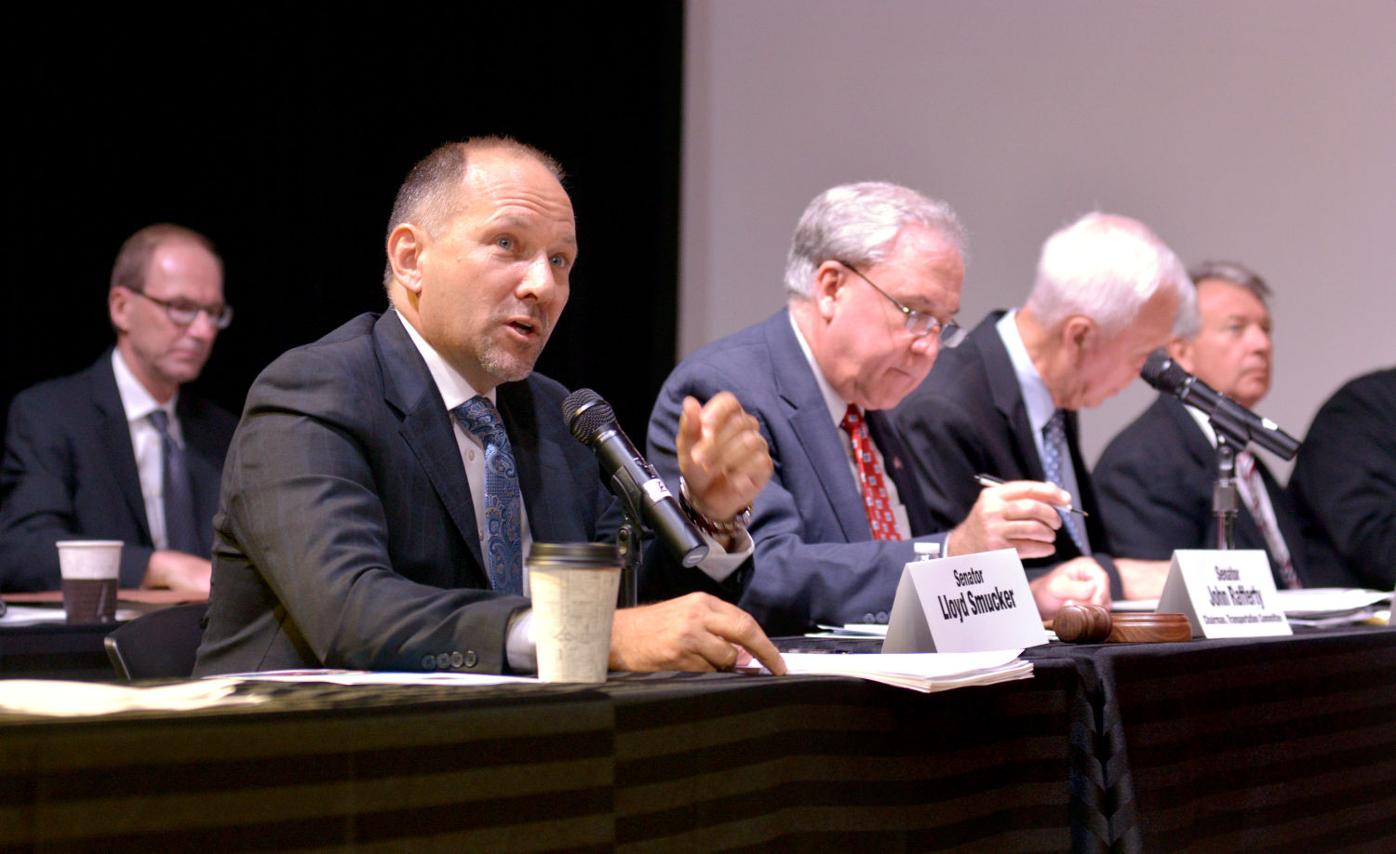 In this file photo from this fall, Sen. Lloyd Smucker (left) speaks at the hearing on the DUI laws currently under discussion in the state Legislature at the Ware Center. 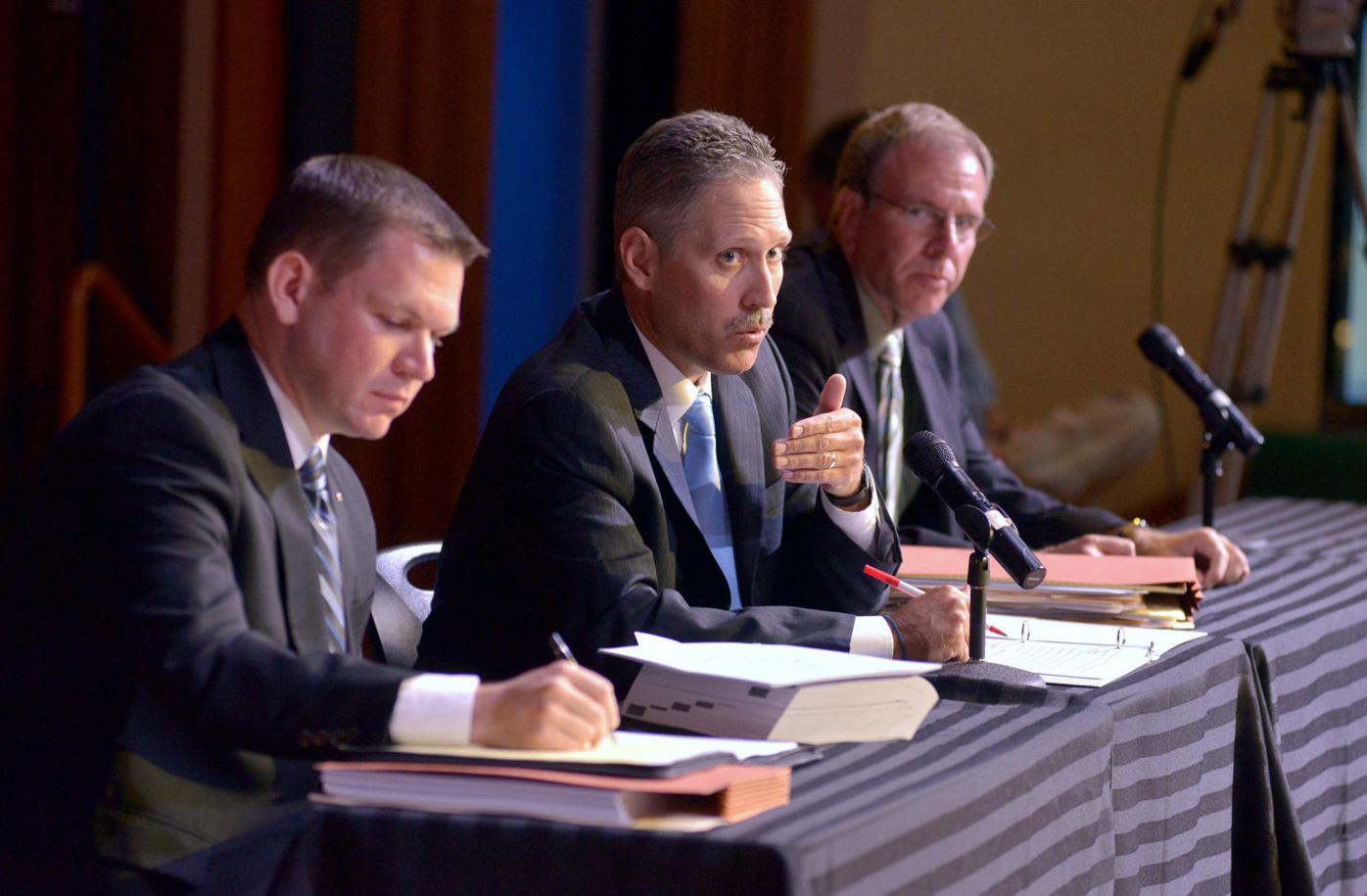 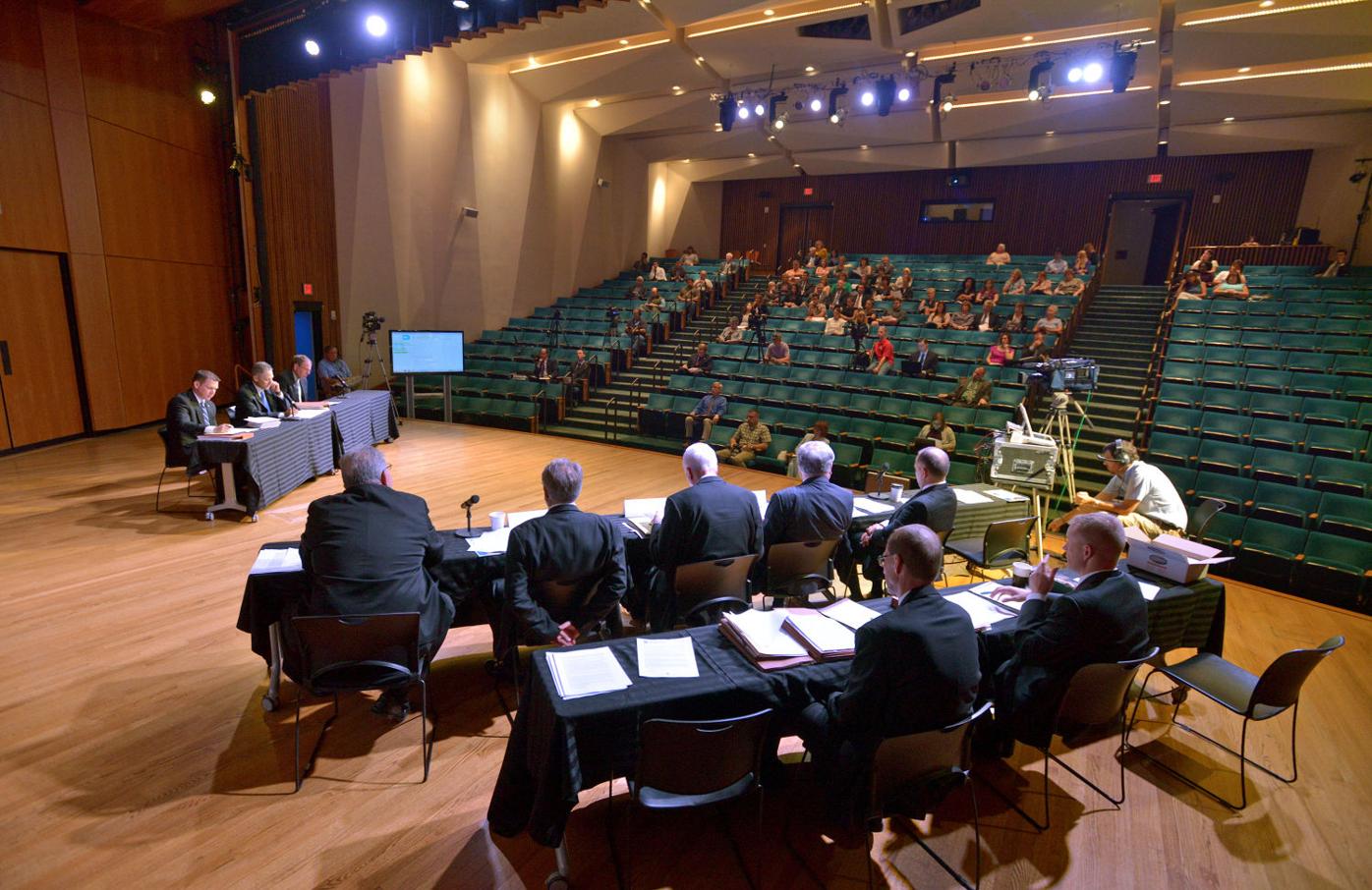 View of the Ware Center Monday morning during the a hearing on DUI laws in Pennsylvania. 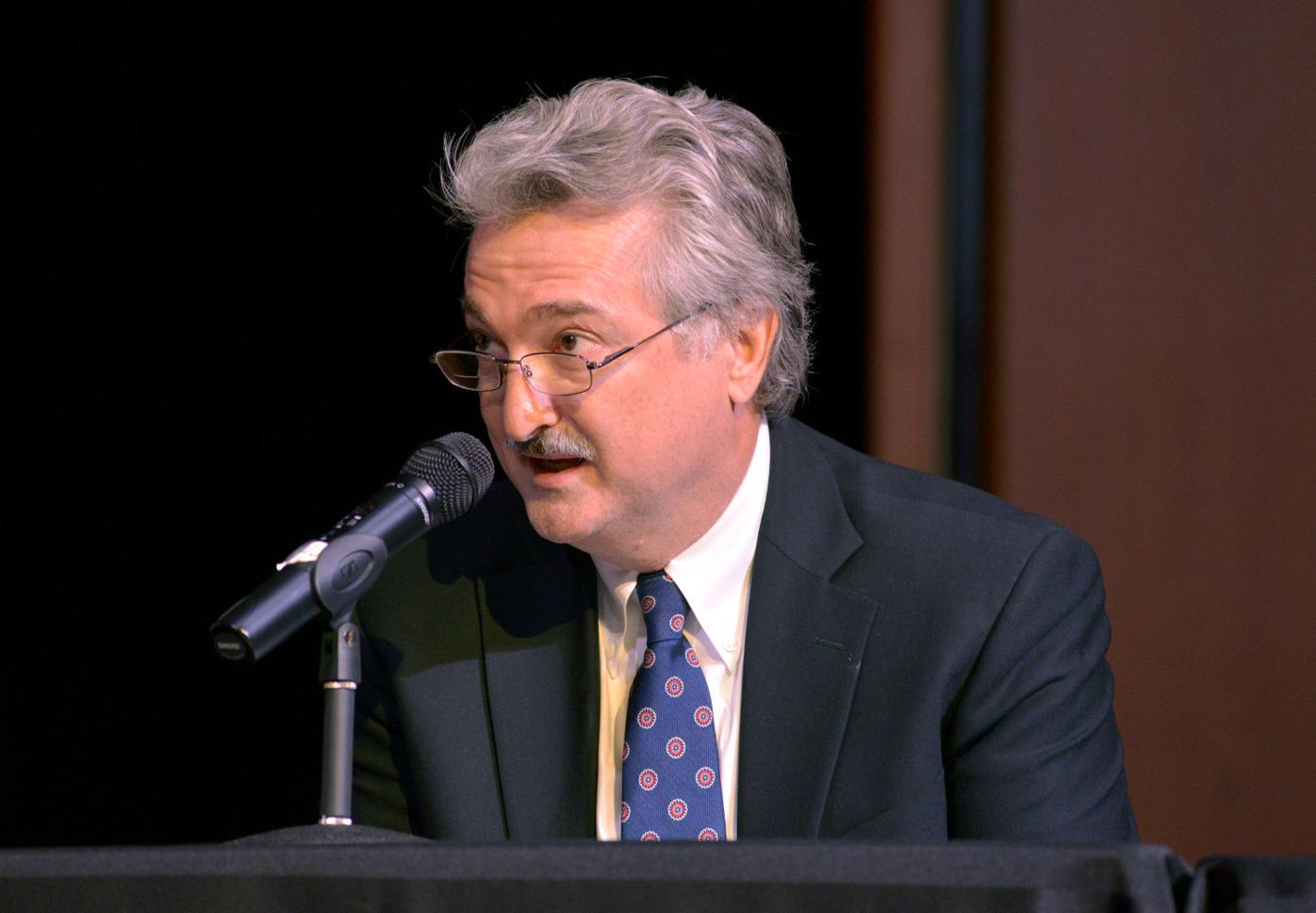 Chris Demko, the father of 2014 Lampeter-Strasburg graduate Meredith Demko who was killed last year by a drunk driver, speaks at a hearing on tougher DUI laws last September.

Chris Demko, Patrick Crowley and Glenn Rudy (left to right) share their stories of the DUI deaths of their children at the hearing held at the Ware Center.

In this file photo from this fall, Sen. Lloyd Smucker (left) speaks at the hearing on the DUI laws currently under discussion in the state Legislature at the Ware Center.

View of the Ware Center Monday morning during the a hearing on DUI laws in Pennsylvania.

Chris Demko, the father of 2014 Lampeter-Strasburg graduate Meredith Demko who was killed last year by a drunk driver, speaks at a hearing on tougher DUI laws last September.

Meredith Demko’s death this summer by a suspected drunk driver ignited a call for action from the Lancaster County community.

Police say the 18-year-old was killed by driver who was drunk, under the influence of heroin and driving on a license suspended because of a prior DUI conviction when he struck Demko’s vehicle on Lampeter Road.

Local residents asked why Gallagher was driving in the first place. And they demanded tougher laws to prevent dangerous drivers from getting behind the wheel again.

That’s why the West Lampeter Township senator decided to bring the conversation on strengthening the state’s existing DUI laws to his hometown. The Republican lawmaker asked his colleagues on the judiciary and transportation committees to participate in the discussion during a special hearing Monday at the Ware Center.

While the lawmakers were there to listen, it was clear from the beginning that they believe the state needs to do a better job keeping drunk drivers off the road.

They were also skeptical about their chances of pushing something through before the legislative session ends Nov. 30.

“Anyone who looks at the statistics on drunk driving can justify the argument that tougher steps are needed,” Smucker said. “Sticking with the status quo is inexplicable and indefensible.”

Related: Officials consider options to crack down of drunk driving

Chris Demko pleaded with the lawmakers to find ways to curb the number of drunk drivers on the road — particularly repeat offenders. Data from PennDOT show about 13,000 of the nearly 48,000 drivers who were charged in 2013 with driving drunk in Pennsylvania had previous DUIs on their records.

His son, Liam, 24, was killed last year by a repeatedly convicted drunk driver. The incident marked the eighth time since 1981 that the driver had been convicted of drunken driving. The Chester County man said the case is an example of the flaws in the state’s sentencing of repeat DUI offenders.

Lancaster County District Attorney Craig Stedman offered about a dozen ideas to the lawmakers that he thinks would result in change. Here are a few:

Stedman supports House Bill 1733, sponsored by Adams County Rep. Dan Moul, which would increase the penalty for homicide by vehicle while driving under the influence from three to five years. Offenders would then have their state driving privileges revoked for life.

Many first-time offenders are eligible for extensive rehab programs that serve as an alternate to jail time. But even habitual offenders don't face much time in jail; a third DUI conviction carries a maximum penalty of two years in jail; many spend far less than that locked up.

The Republican lawyer stands behind Senate Bill 1036, sponsored by Collegeville Sen. John Rafferty, that would permit the installation of interlocks for first-time drunken-driving offenses.

Currently in Pennsylvania, interlocks are required for second or subsequent DUI offenses, and the law has a lot of holes in it. In addition to applying only to habitual offenders, interlocks typically aren’t installed on a vehicle until the driver's license suspension has ended.

Stedman believes vehicle forfeiture could be an effective deterrent. The state could only forfeit vehicles used in the crime by someone with ownership rights and, he said, it should be based on the circumstances of the case.

“In the hands of an impaired driver, a vehicle is a deadly weapon. There is no better way to prevent repeat DUI offenses than taking away the means to commit that offense,” he said.

Pennsylvania does not currently permit forfeiture in DUI cases, but at least 30 other states have laws that allow for forfeiture or impoundment of a vehicle under certain circumstances.

The district attorney suggested that convicted DUI offenders be subject to lower blood-alcohol content limits. He said dropping the level from .08 to .025 for those drivers would be a good place to start.

There are five states where a similar law is being enforced. A study by the National Highway Traffic Safety Administration showed a dramatic decrease in the number of impaired driving fatalities.

Several state have adopted policies and laws with regard to special license plates for those convicted of DUI. Stedman said the plates make other drivers and law enforcement aware of a potential high-risk driver on the road.

“It is often said that the greatest deterrent is the fear of being caught. This sanction increases the likelihood that repeat offenders will be caught,” he said.

Deb Beck, president of the Drug and Alcohol Service Providers Organization of Pennsylvania, told lawmakers that Stedman was missing a key component in his presentation. She said identifying and addressing the factors that cause people to choose to drive under the influence is critical to prevention.

And treatment, she said, can’t end with graduation from Accelerated Rehabilitative Disposition, a program for nonviolent offenders with limited or no criminal records.

“You can’t talk about this problem without talking about addiction,” she told lawmakers. “We’re not against tougher penalties but that is just one aspect of the problem.”

Beck pointed out the irony of lawmakers discussing more stringent penalties at a time when state aid to local drug and alcohol treatment programs has been consistently cut from the state budget.

Frank Harris, manager of legislative affairs for the Pennsylvania chapter of Mothers Against Drunk Driving, said investing in alcohol-education programs is essential.

Smucker acknowledged that the best way to combat DUI incidents is to impose a number of the suggestions made at the hearing. He’s hopeful legislation will be passed before legislators leave for the year, but said it will tough to do with just a handful of days left in Harrisburg.

Karen Shuey is a Lancaster Newspapers staff writer who covers state and federal government and politics. She can be reached at kshuey@lnpnews.com or (717) 291-8716. You can also follow @Karen_Shuey on Twitter.