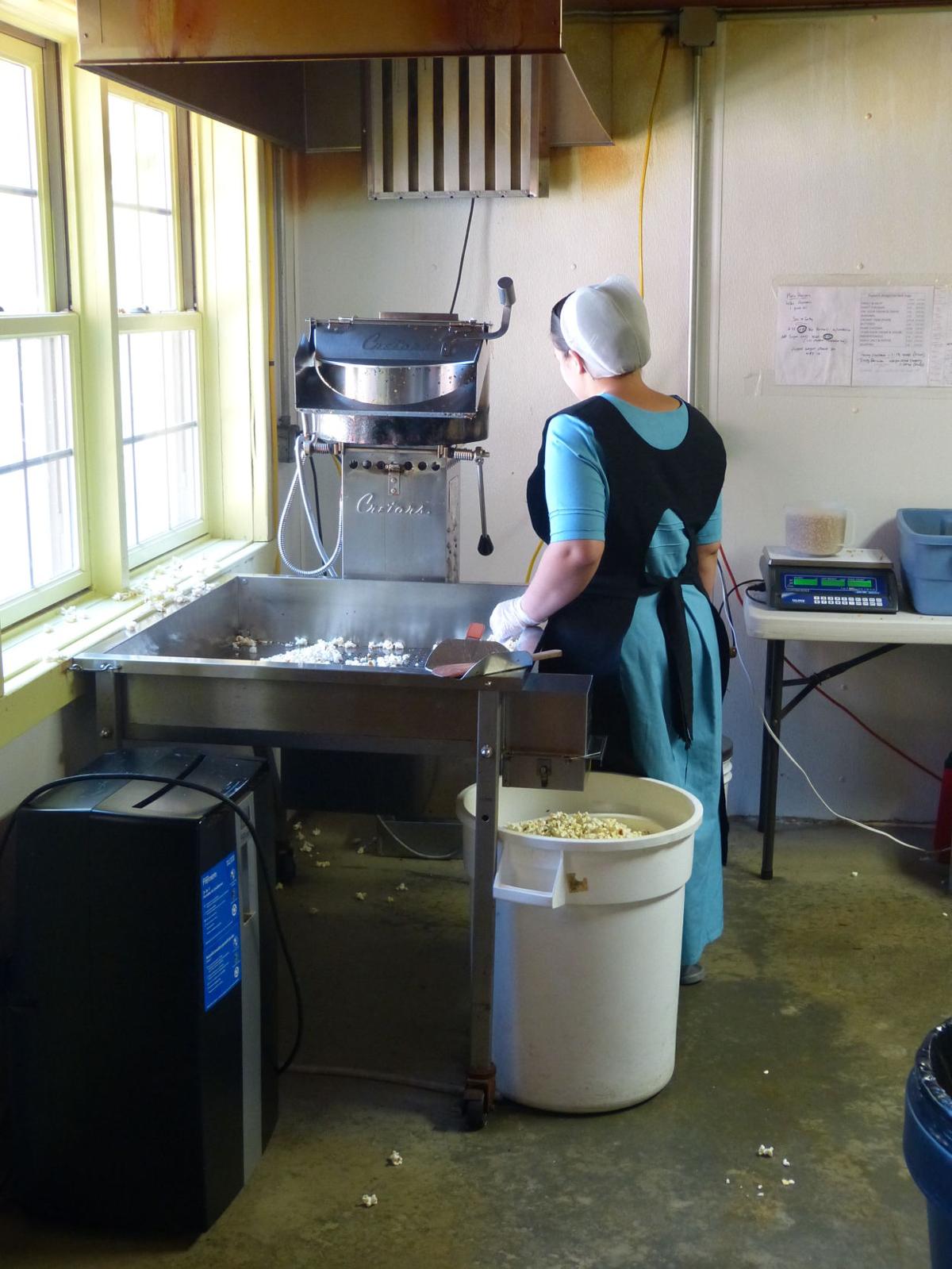 A worker tends the popcorn popper at Emma's Gourmet Popcorn. 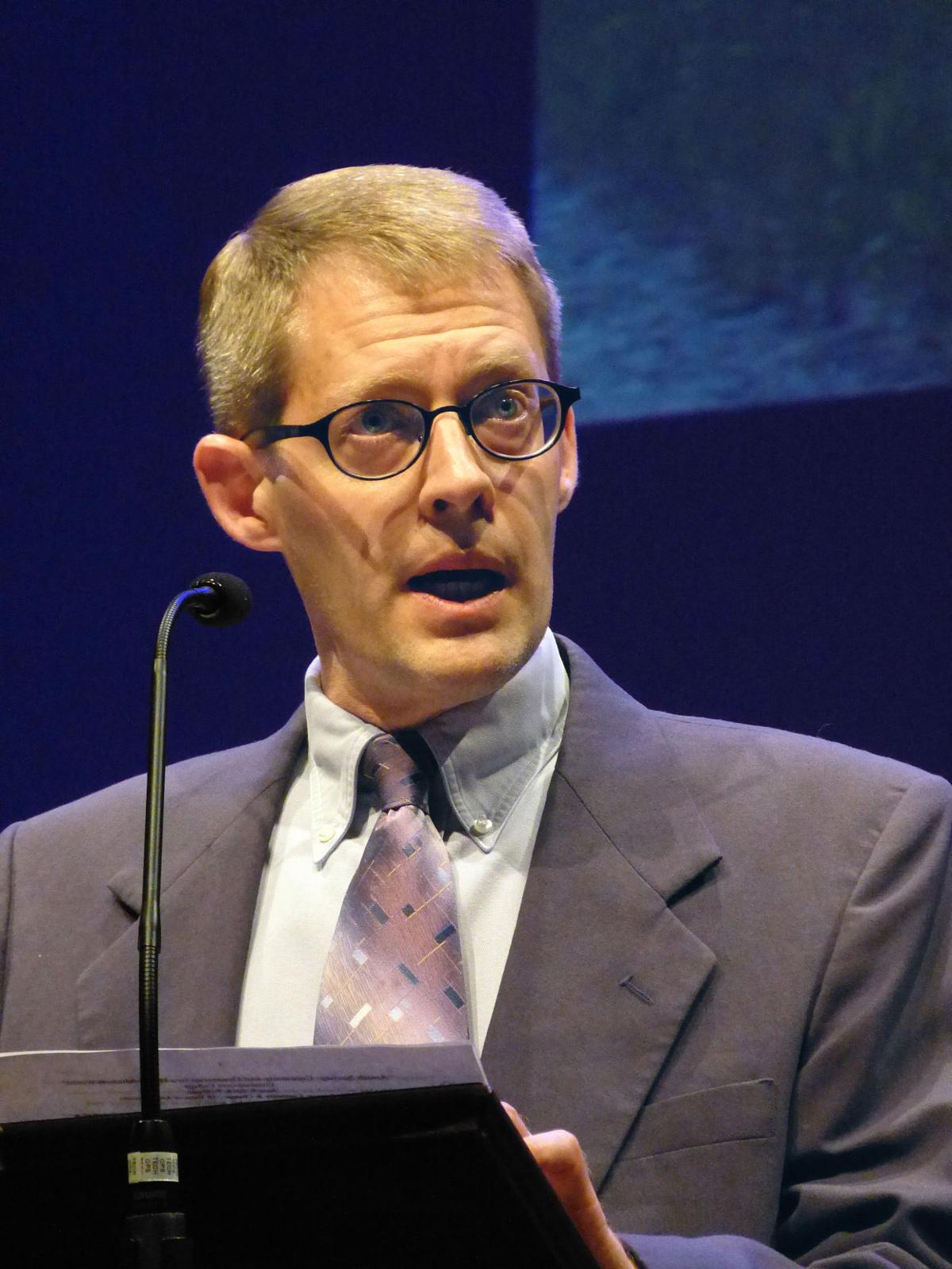 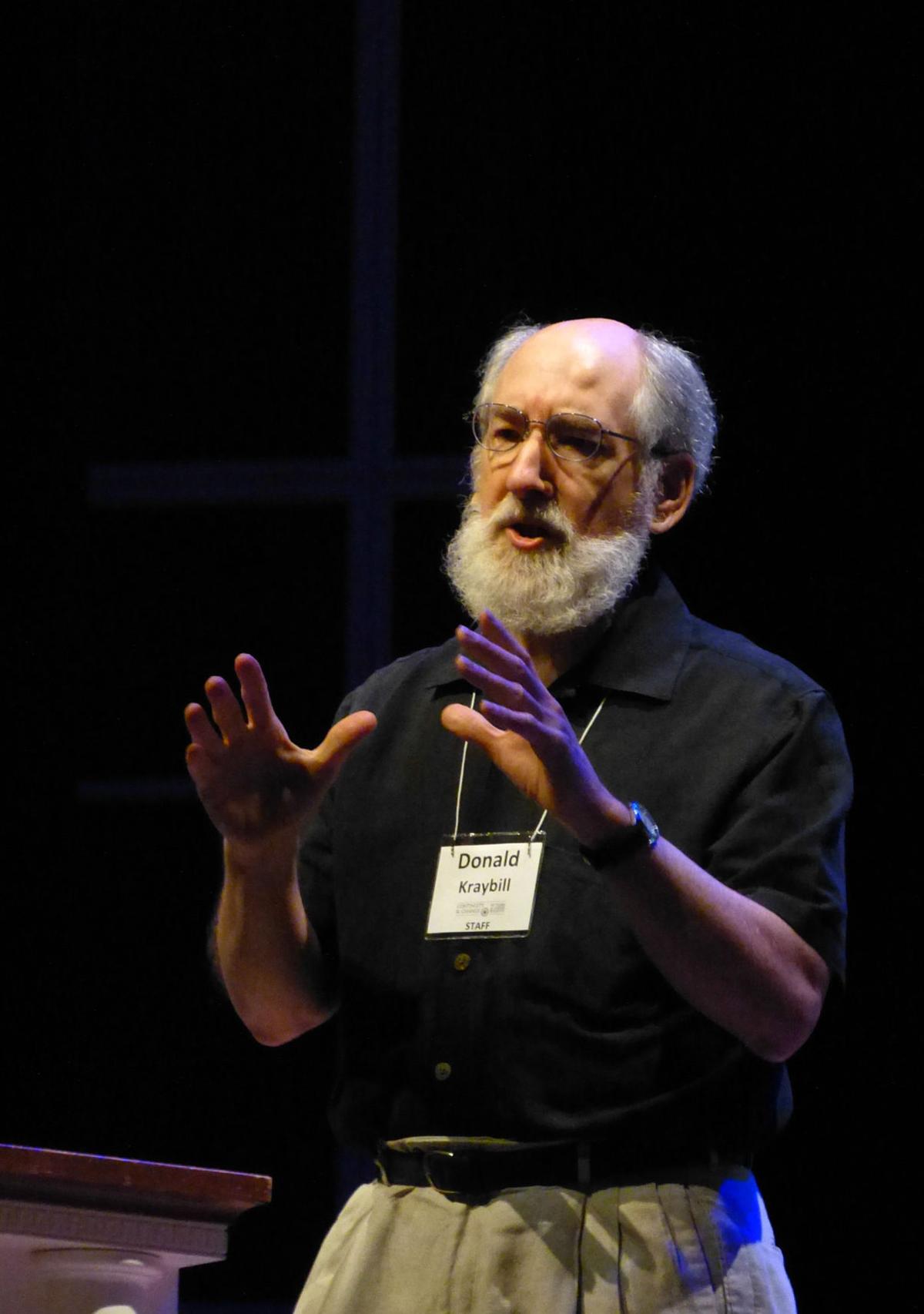 Amish scholar Don Kraybill speaks Saturday, June 11, 2016, at the conference "Continuity & Change: 50 Years of Amish Society," put on by the Young Center for Anabaptist and Pietist Studies at Elizabethtown College. 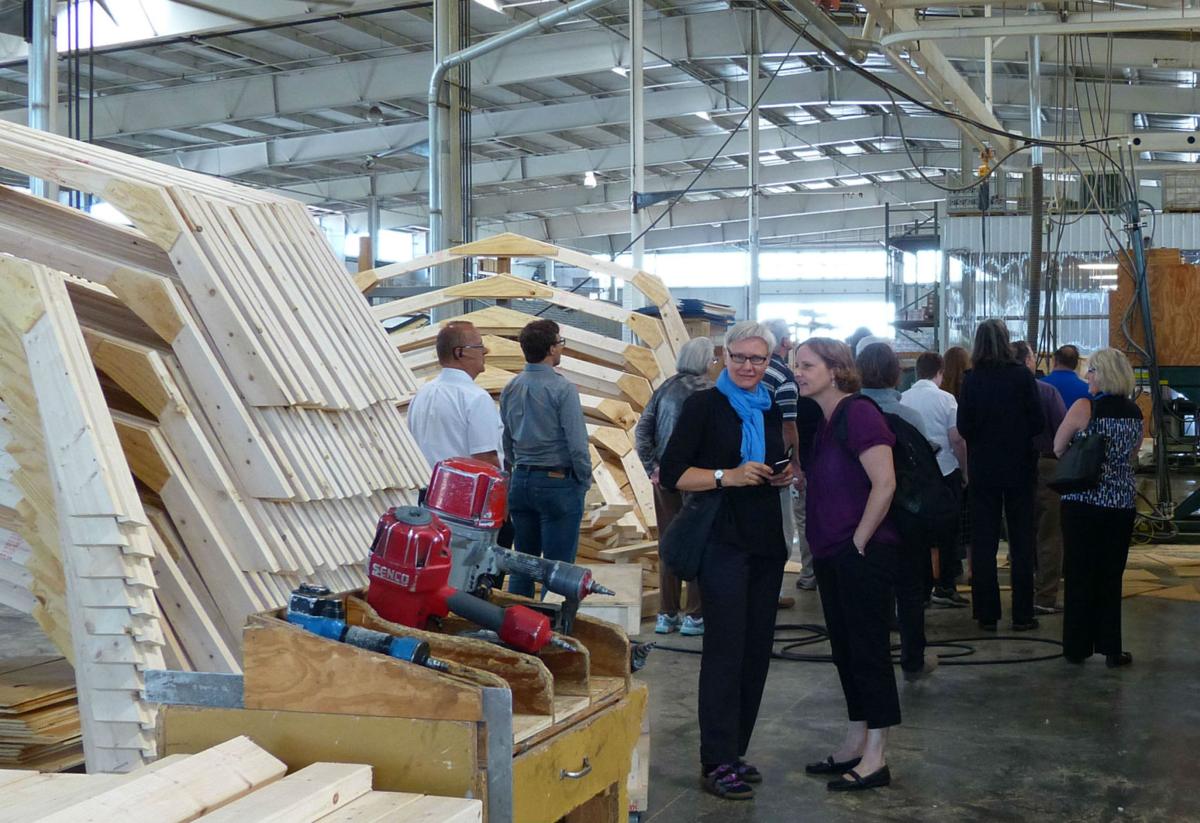 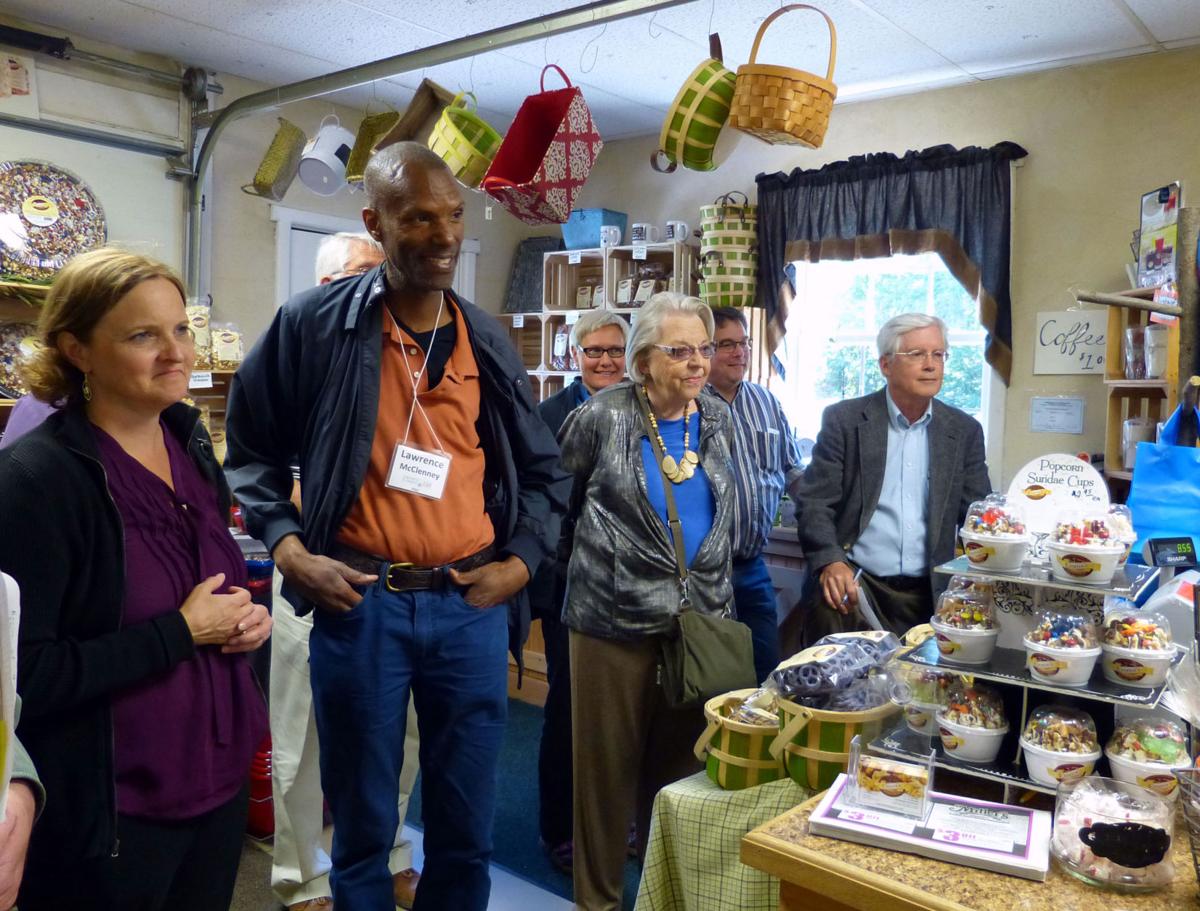 Lawrence McClenney, second from left, and other participants in Elizabethtown College's conference on Amish society learn about Emma's Gourmet Popcorn during an on-site visit on Thursday, June 9, 2016. 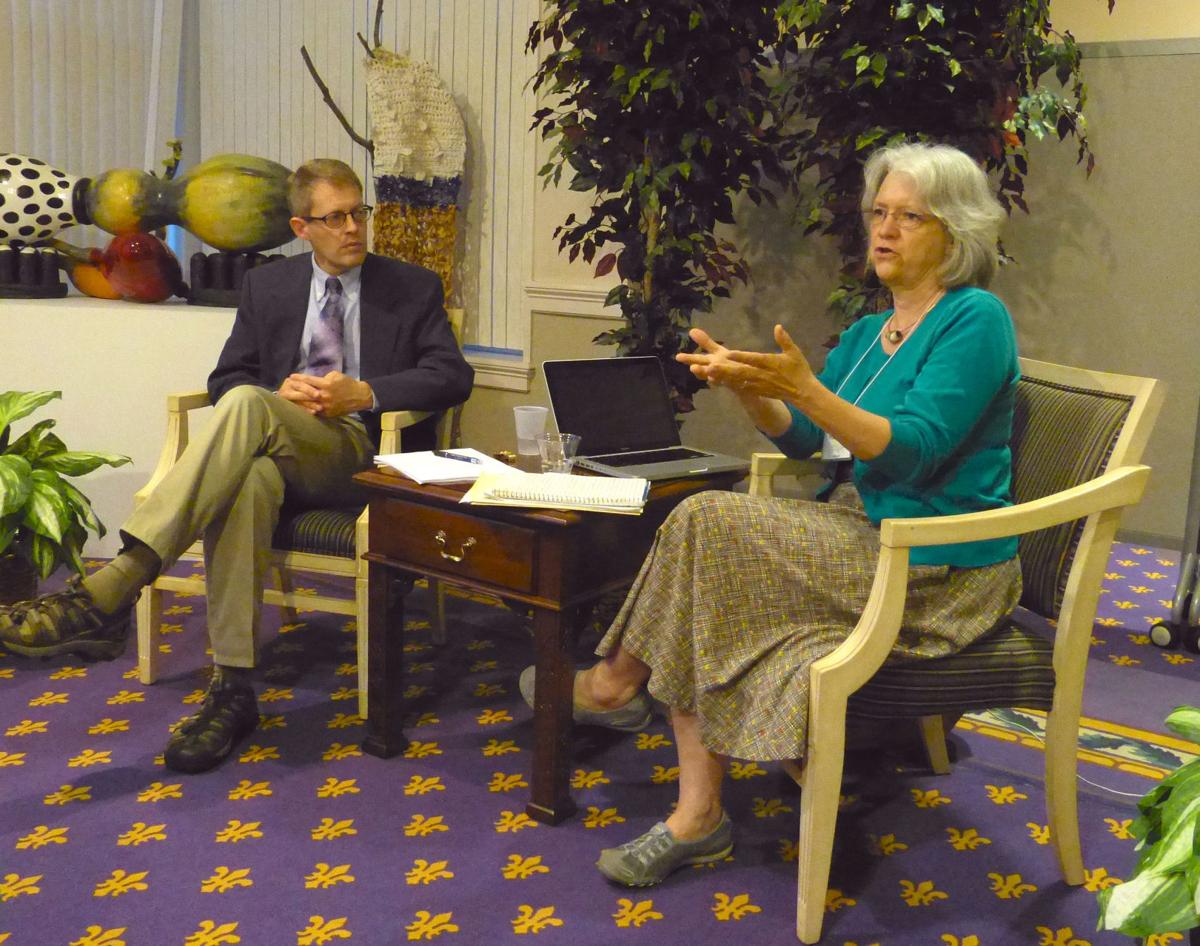 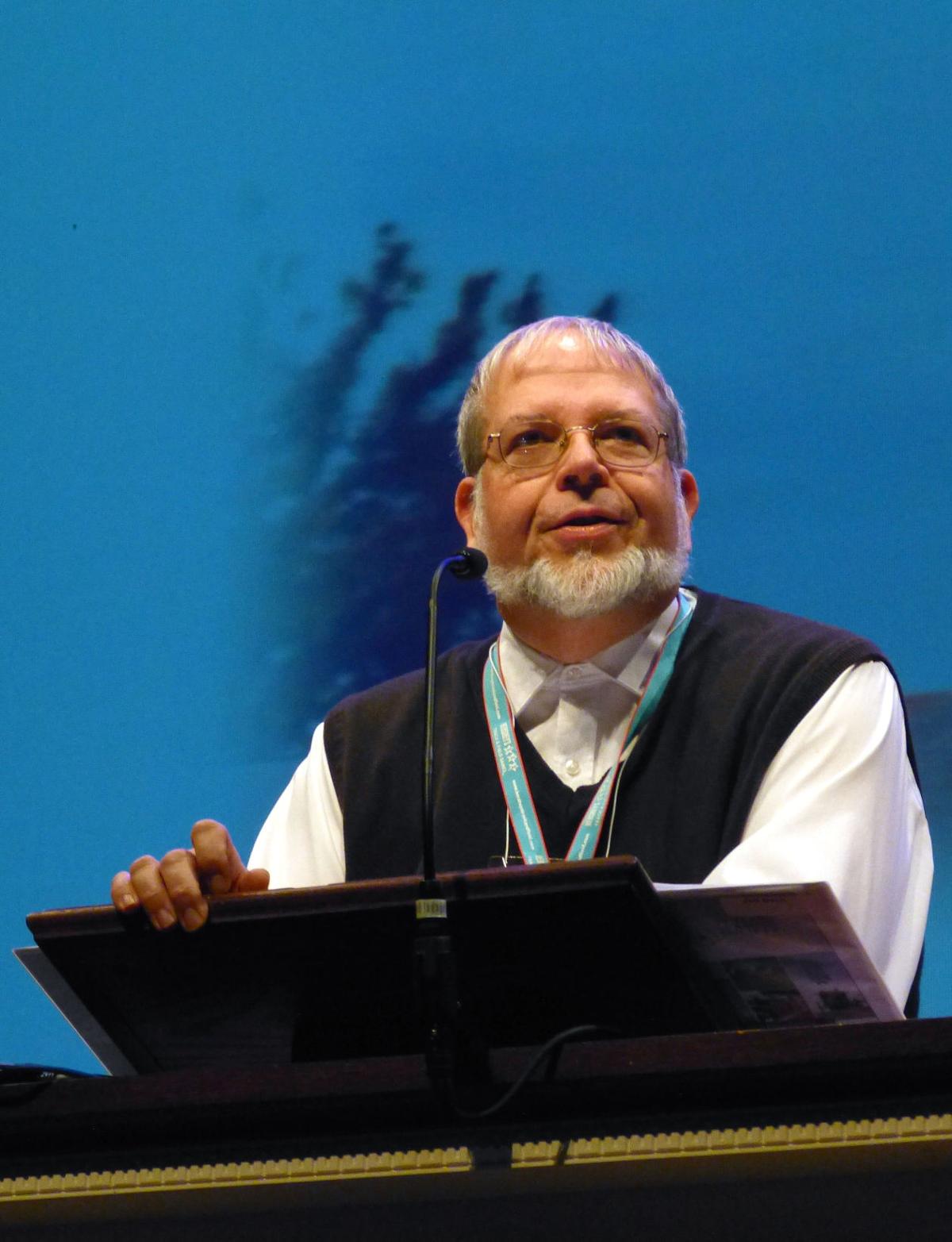 Jeff Bach, director of the Young Center for Anabaptist and Pietist Studies 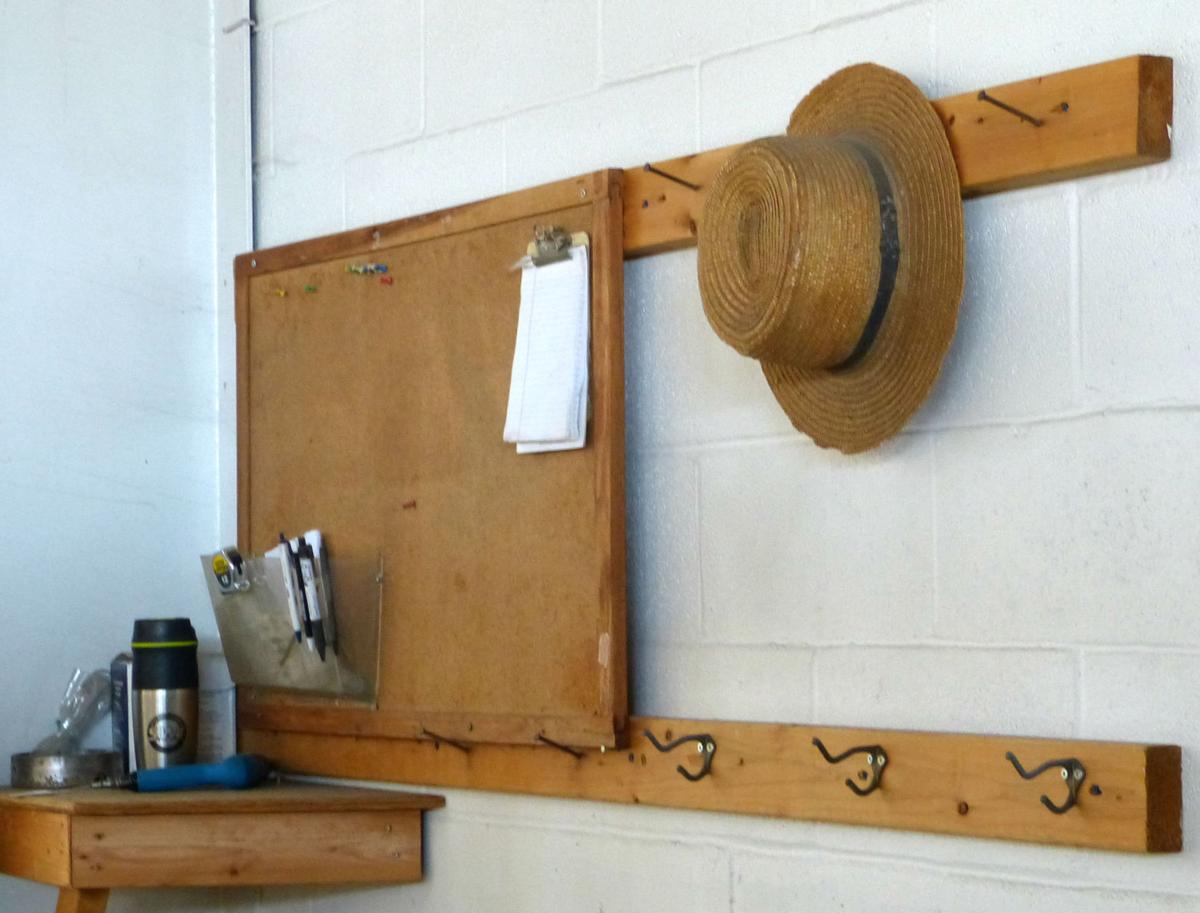 A straw hat hangs on the wall at Lantz Structures.

A worker tends the popcorn popper at Emma's Gourmet Popcorn.

Amish scholar Don Kraybill speaks Saturday, June 11, 2016, at the conference "Continuity & Change: 50 Years of Amish Society," put on by the Young Center for Anabaptist and Pietist Studies at Elizabethtown College.

Lawrence McClenney, second from left, and other participants in Elizabethtown College's conference on Amish society learn about Emma's Gourmet Popcorn during an on-site visit on Thursday, June 9, 2016.

Jeff Bach, director of the Young Center for Anabaptist and Pietist Studies

A straw hat hangs on the wall at Lantz Structures.

Ever feel like life is moving too fast? That technology is upending everything?

Chances are, those folks in horse-drawn buggies you pass on Lancaster County roads feel the same way.

Beneath the simplicity they display to the outside world, the Amish are contending with numerous 21st century challenges, according to scholars at Elizabethtown College’s conference on Amish studies last week.

Over the past generation, the majority of Amish households have shifted to making a living through wage labor or a small business rather than farming.

That has been “the most consequential change” for the Amish since they arrived in North America, emeritus scholar Don Kraybill said.

Meanwhile, the society around them has developed destabilizing new technologies — most notably the Internet and smart phones — and become more fluid and individualized. Kraybill and other scholars referred to this stage as “hyper” or “liquid” modernity.

For Plain Sect communities, today’s world is one “in which categories are unstable (and) convention and tradition bend,” historian Steven Nolt said in his keynote address.

In a talk Saturday, Kraybill said the cultural practices the Amish developed to maintain a firewall against mid-century modernity won’t work this time around.

How do you maintain a separate culture when a teenager can see the whole internet with a cheap smart phone, or when you can’t do business without one?

Perhaps in the future there will be three types of Amish, he suggested: smart phone Amish, “dumb phone” Amish who stick to flip phones and land lines, and strict, conservative no-phone Amish.

Every three years, the Young Center makes the Amish the focus of its annual conference. This year’s event, “Continuity and Change: 50 Years of Amish Society,” ran Thursday through Saturday and drew about 220 people from the U.S. and nine foreign countries, Young Center director Jeff Bach said.

They discussed Amish medical issues, quilts, demographics and culture, as well as popular perceptions of the insular denomination.

Besides illuminating a fascinating way of life, Amish studies can be a way of “holding up a cultural mirror to ourselves” and thinking about our own society’s changes, Bach said.

Nolt, a Lancaster County native, is the Young Center’s newly appointed senior scholar. He succeeds Kraybill, who retired from teaching but continues his research and writing.

In his talk Thursday, Nolt traced the evolving relationship between Amish and mainstream culture since “Amish Society,” the landmark 1963 book by John Hostetler, the center’s founding director. Hostetler is credited with launching study of the Amish as a modern academic field.

Later that evening, he interviewed Hostetler’s daughter, Ann, about her father’s life and the influences on his work.

Tomomi Naka, a professor at Tottori University in Japan, said she was amazed by the scale of the enterprises she saw on a bus tour of Amish businesses, one of three tours offered by the conference.

One stop was Lantz Structures, which produces about 4,500 sheds a year at a 50,000-square-foot facility on Newport Road. Workers with pneumatic nail guns clambered over sheds in various stages of completion, which were pulled along production lines by chains embedded in the floor.

In Gordonville, DS Machine Shop turns out a full line of stoves, furnaces and boilers, plus display racks, gear racks and other fabricated metal products.

Both companies use diesel generators for power, supplemented modestly at DS Machine Shop by a solar panel installation.

That commitment to staying off the electricity grid used to be a given, and it’s still the ideal, but for some Amish small businesses it’s impractical, and the rule is increasingly being bent, scholars at the conference said.

Similarly, the importance of e-commerce has blurred the lines with regard to the Internet and social media. Emma’s Gourmet Popcorn, another stop on the tour, boasts a Facebook page and a website that takes online orders.

Such changes remain the subject of intense debate within Amish communities. Innovations are incremental, and acceptance is usually tacit rather than formal.

Kurt Schultz, of Huntsville, Alabama, said he was surprised that so much among the Amish is unsettled. “I always thought there was a much wider agreement on things,” he said.

Shultz is an IT specialist who works with Boeing and NASA. He was among a number of people attending the conference primarily for personal rather than professional interest.

Lawrence McClenney’s interest in the Amish dates from childhood visits to Lancaster. Today he’s a ranger at Independence National Historical Park in Philadelphia, site of Independence Hall and the Liberty Bell.

Amish guests join the park’s tours from time to time. McClenney said he hoped expanding his understanding would help him become a better guide for them.

He said he was struck by Amish people’s “ingenious ways of grappling with modernity” while keeping their family life paramount.

“I found that to be very impressive,” he said.

Tropic storm Isaias whips up eastern US, killing at least 6