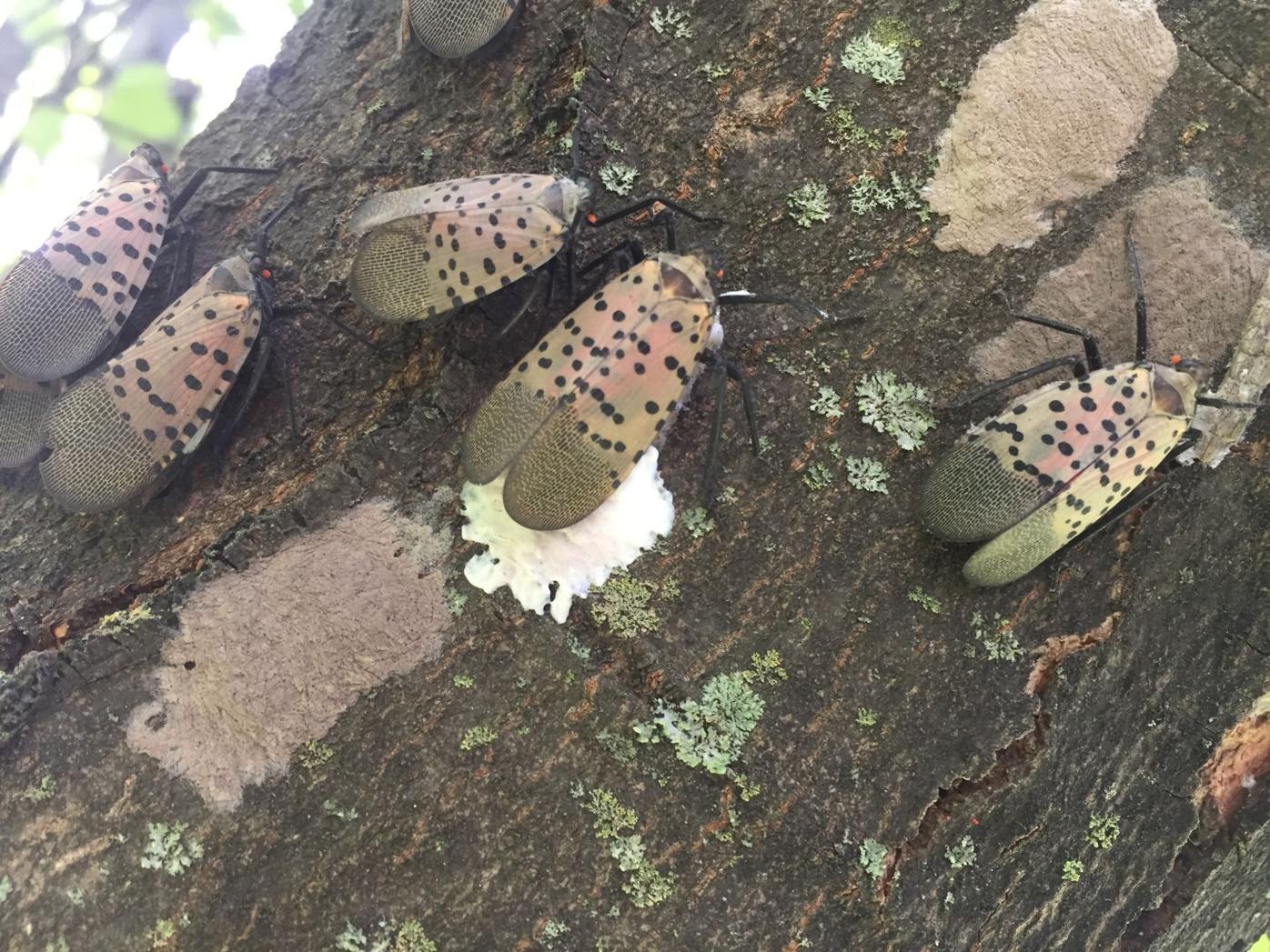 Adult spotted lanternflies cover the eggs with a white secretion that protects the eggs from parasites, predators and the weather outside. 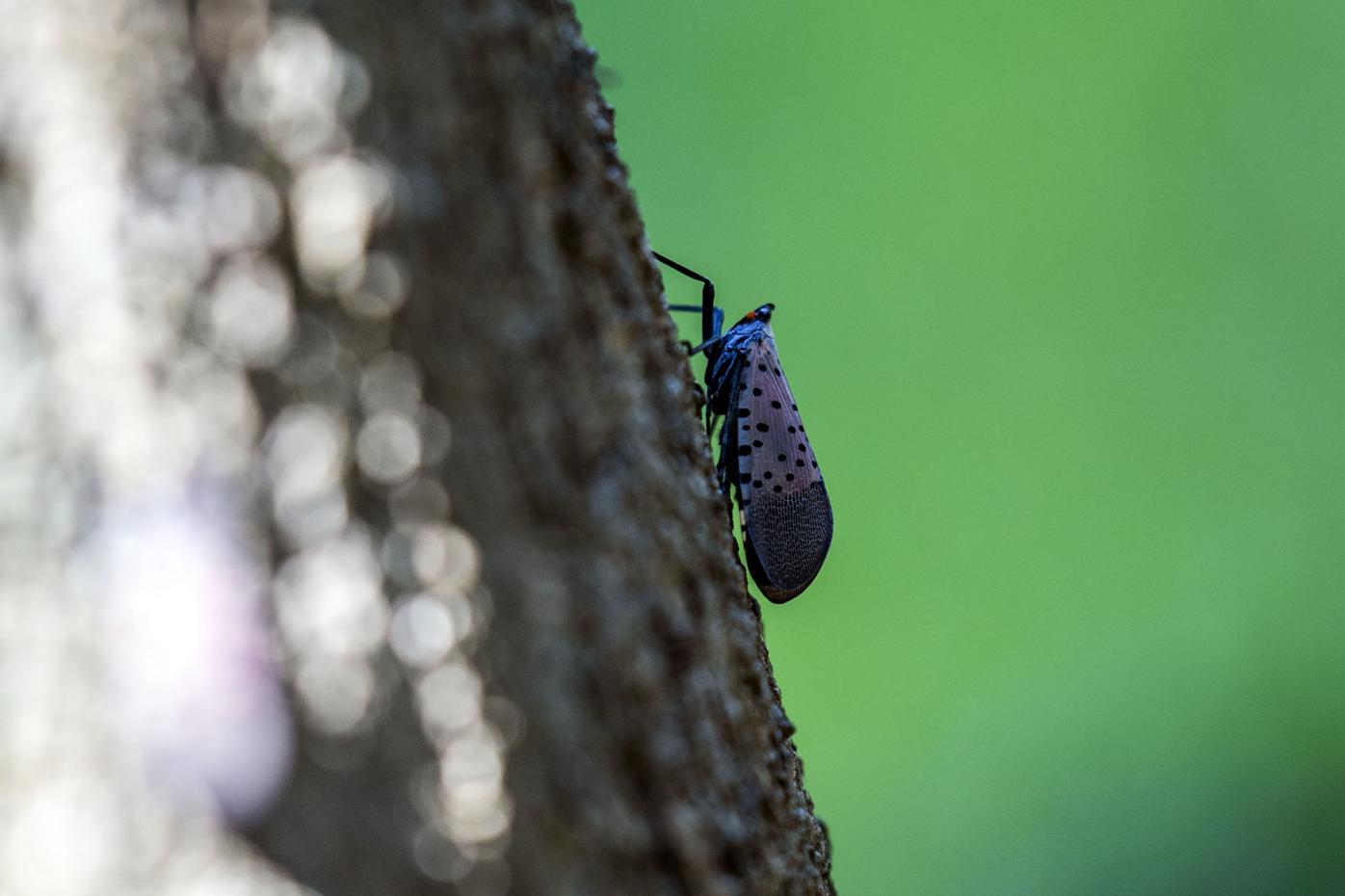 A spotted lanternfly moves up a tree off the Heritage trail in Manheim Township, Tuesday, August 20, 2019. The spotted lanternfly is an invasive planthopper that’s native to China, India and Vietnam and has been seen in an overwhelming amount of places throughout Lancaster County. 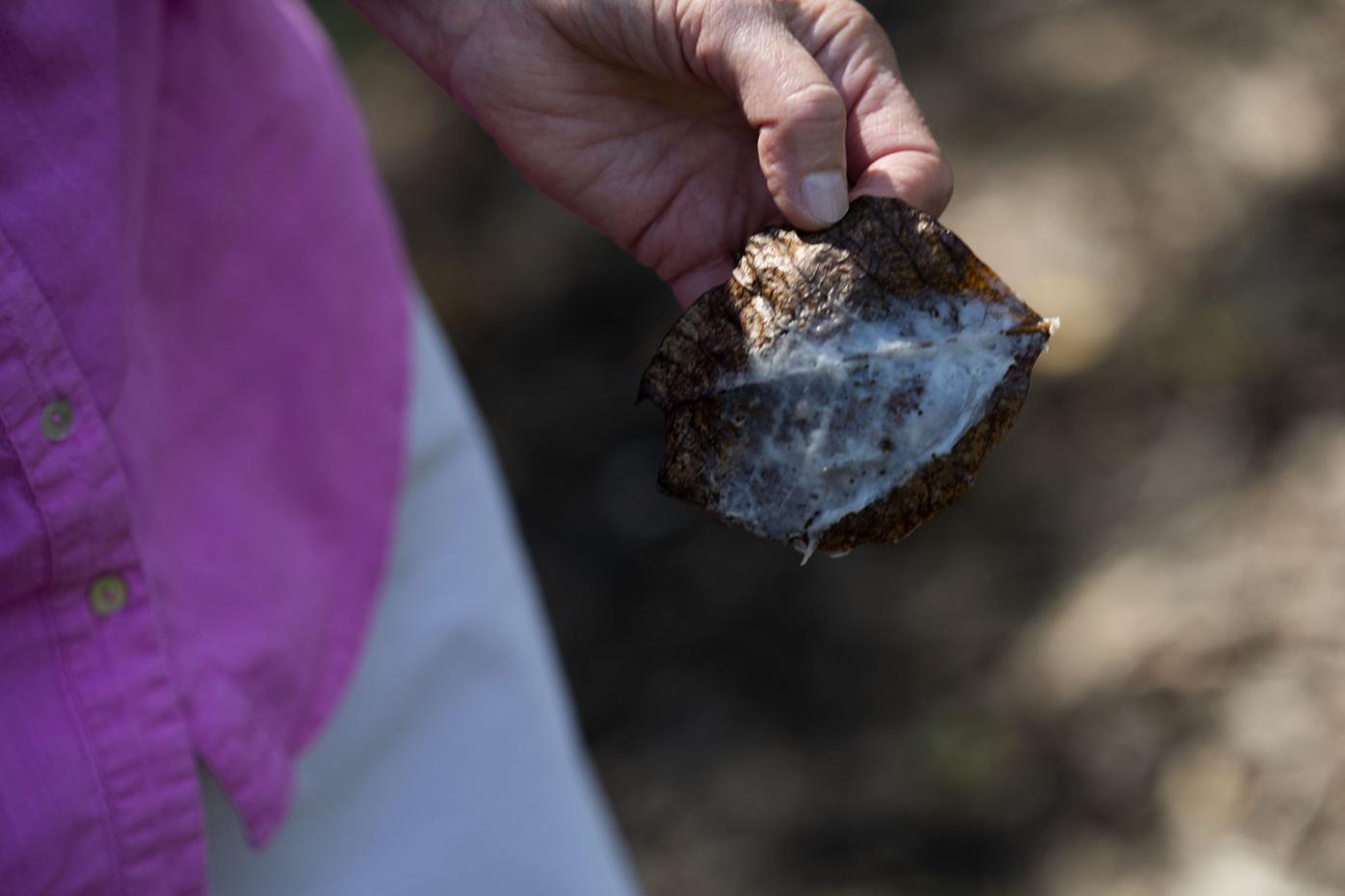 Jane Strassle, who found the spotted lanternflies on a tree along the Heritage trail in Manheim Township, lifts up a leaf with the laternflies’ secretion on it, which surrounded the base of the tree, Tuesday, August 20, 2019.

A quarantine zone for the crop-destroying spotted lanternfly has been expanded by a dozen counties, meaning the invasive insect can now be found across about a third of the state.

Lancaster County has been in the quarantine zone since 2017, but neighboring York County was among those added this year.

Officials at the state Department of Agriculture announced Tuesday that the spotted lanternfly quarantine zone would be expanded ahead of the bugs’ 2020 egg hatching season.

According to department officials, the newly added counties are not completely infested, but they contain communities where lanternfly infestations have been reported.

"Most of these municipalities have already been aggressively treated," Bureau of Plant Industry Director Ruth Welliver said in a statement. "With continued aggressive treatment and monitoring and an actively engaged community, we can strike spotted lanternfly from these counties."

Within the quarantine zone, the department restricts movement of certain plants, landscaping materials and construction waste, among other items.

The lanternfly, which is native to Asia was first detected in Pennsylvania in 2014, specifically in Berks County.

The red, black and white insects feed on plants before excreting a sticky substance that can attract sooty mold, a dark fungus that can be damaging to crops, according to Sallie Gregory, education coordinator with the Lancaster County Conservation District.

An earlier Penn State University study warned that the invasive bug could deal billions of dollars worth of damage to Pennsylvania’s plant-based commodity markets.

The insects were first detected in northeastern Lancaster County near its border with Berks County, Gregory said.

“It’s slowly been moving across the county,” she said.

Officials at the conservation district, funded by $250,000 in grant dollars, have deployed ongoing programs to combat the insects, providing public information about the pests, while also implementing measures to trap and kill the bugs.

"It's wreaking havoc for home and business owners,” state Agriculture Secretary Russell Redding said in a statement. “Whether you think it's your job or not, we need every Pennsylvanian to keep their eyes peeled for signs of this bad bug – to scrape every egg mass, squash every bug, and report every sighting.”

Intentional movement of the spotted lanternfly is illegal and could lead to criminal or civil penalties.

Jennifer Procyson said Kristen Graham, who was found strangled to death Monday in her Caernarvon Township bedroom, was her best friend.

Readers speak out on enclosed blinds for deer hunting

Dozens of readers wrote in to share their views on hunting deer from enclosed blinds, and those views were mainly divided into two camps - those who love them and those who don't.

Editor's note: This story was originally published in April. We brought it back because many spotted lanternfly eggs start to hatch in May.

Insects don't care if there's a pandemic; they're going to hatch anyway.

The first spotted lanternfly eggs have hatched in Pennsylvania this season, signalling another year of the destructive invasive insects’ sprea…

Want to help stop the spread of spotted lanternflies without the sticky bands? Here’s how to build a new trap

A new type of trap captures spotted lanternfly and has less of a chance of trapping other bugs or birds.

Marking the first Pennsylvania case of 2020, state officials announced Thursday that they believe they’ve identified someone suffering with We…

With one arm extended toward the base of a tree, Amanda Goldsmith reached out, pulling away a covering of wire mesh to reveal a band of sticky…