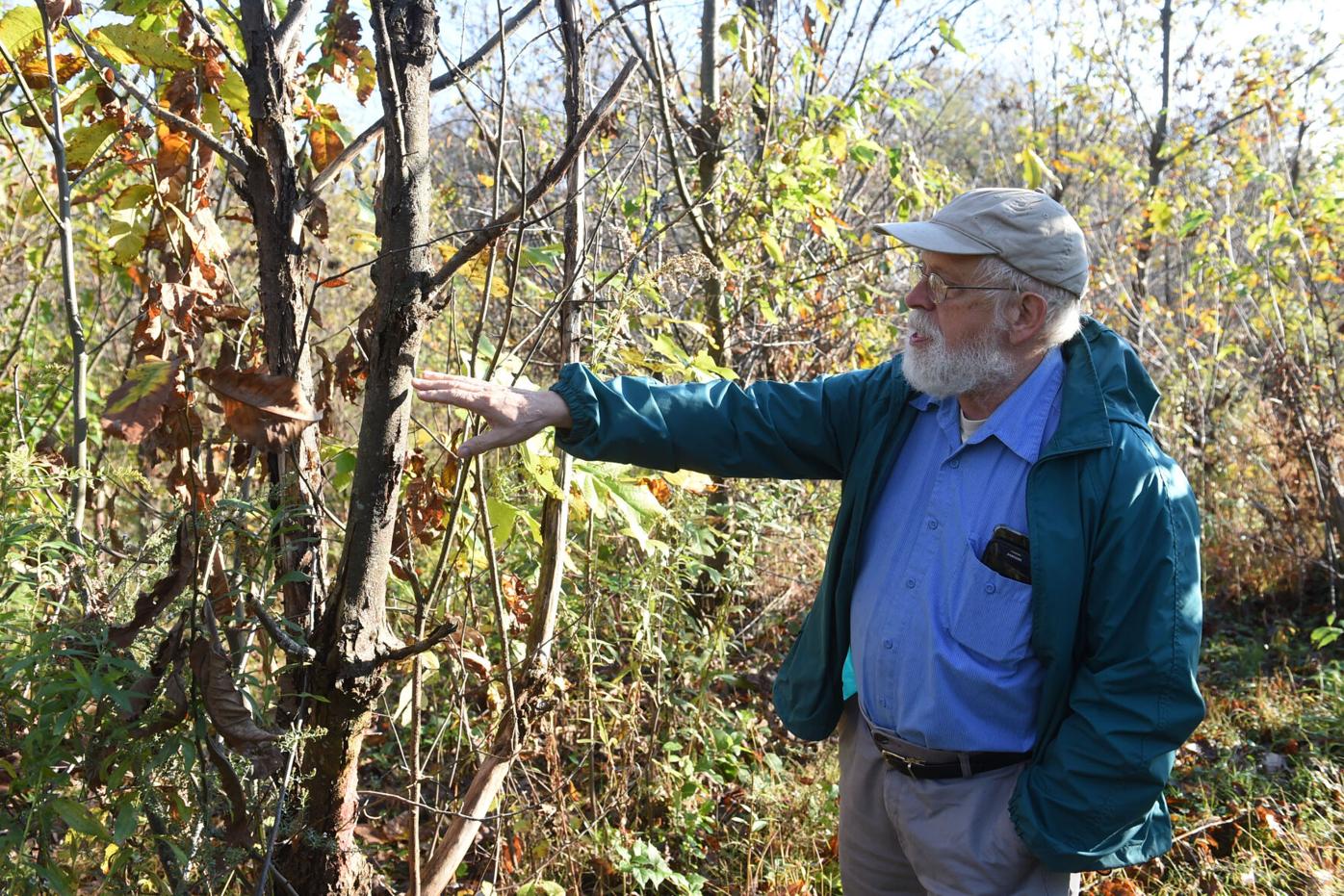 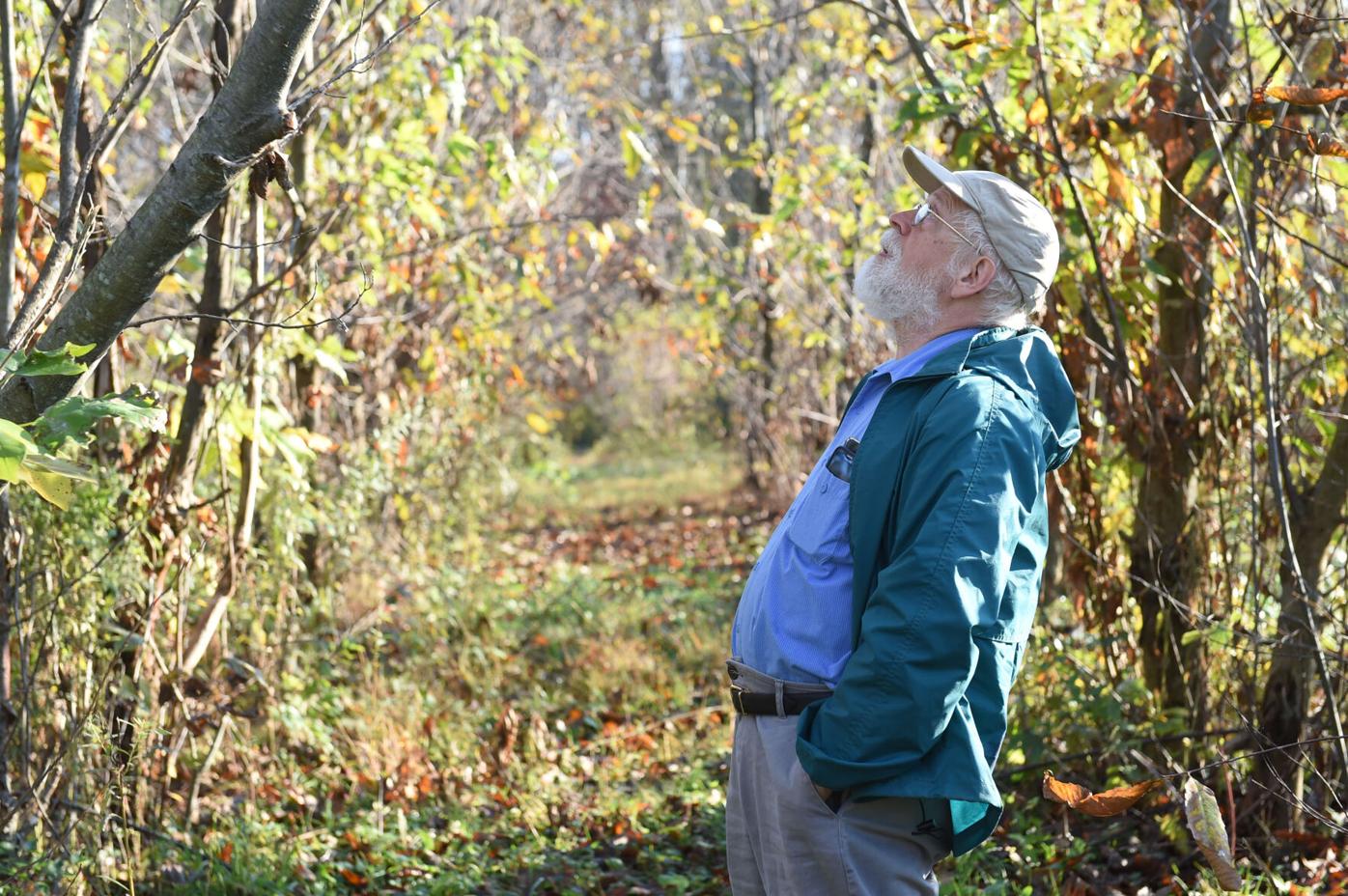 Local expert Tim Eck looks up at a native chestnut tree at House Rock Nature Preserve in Martic Township Saturday Oct. 31 2020. There, he spoke about the invasive fungus that nearly wiped them out. 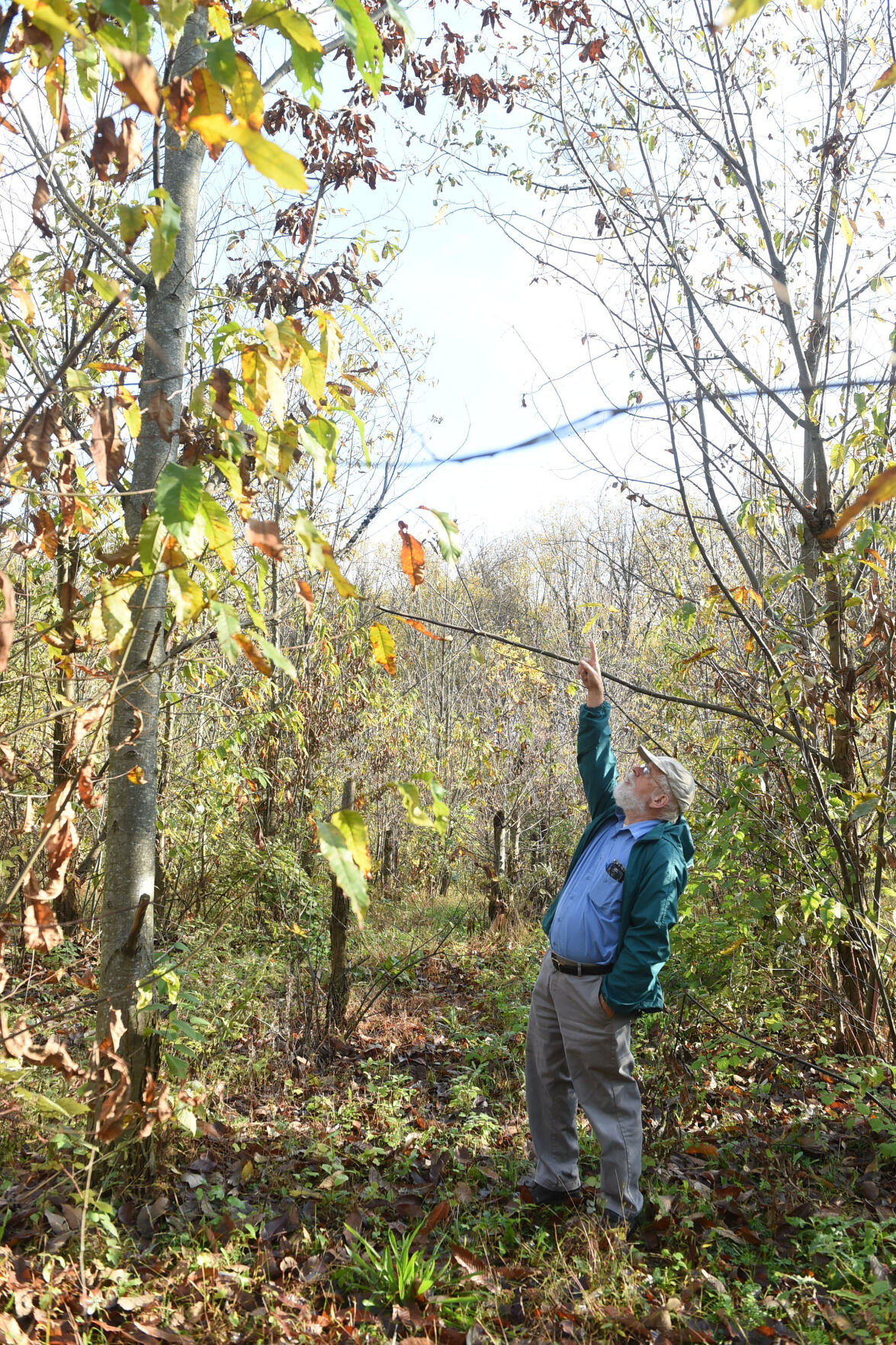 Local expert Tim Eck points up at a native chestnut tree at House Rock Nature Preserve in Martic Township Saturday Oct. 31 2020. There, he spoke about the invasive fungus that nearly wiped them out. 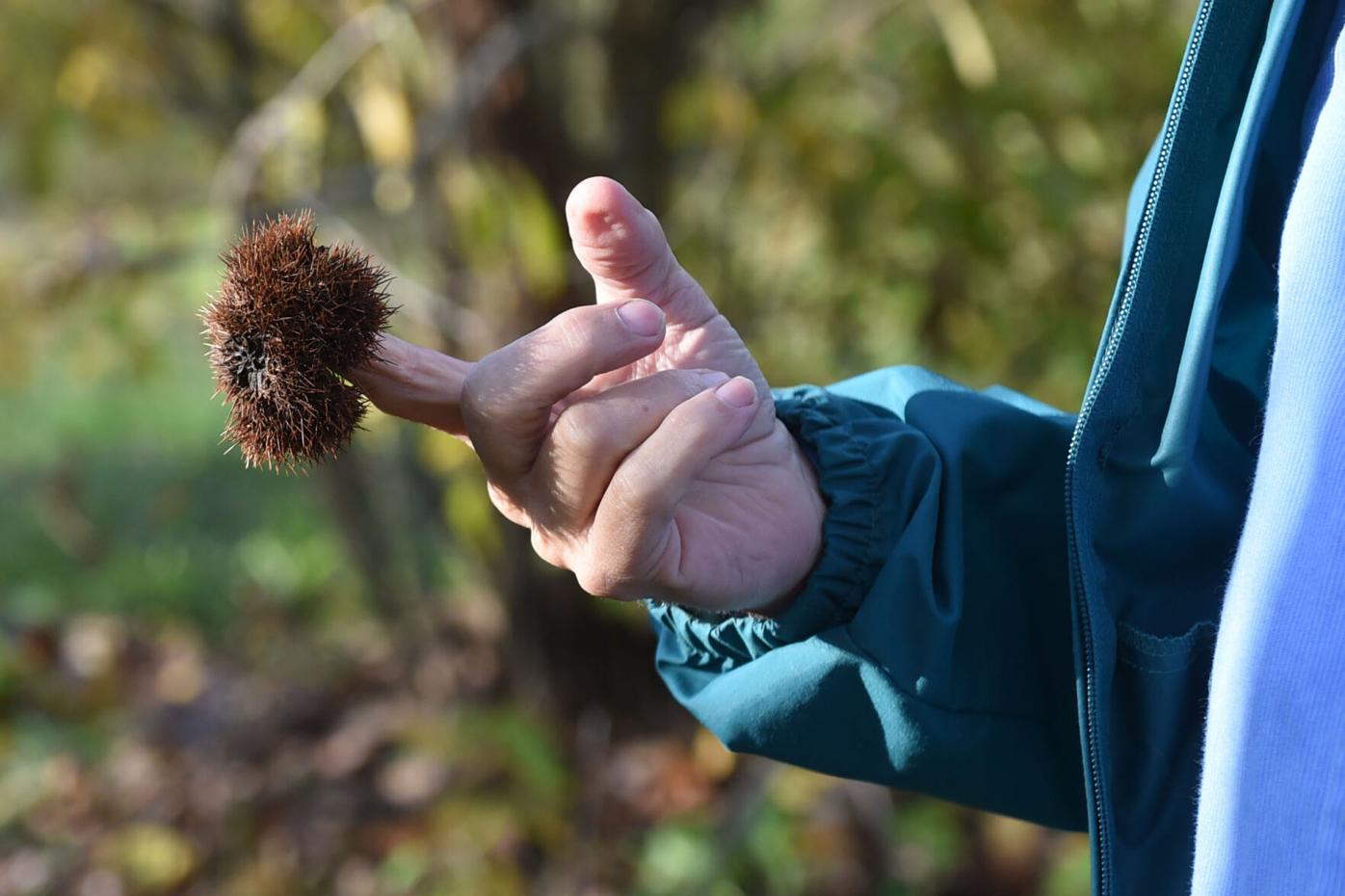 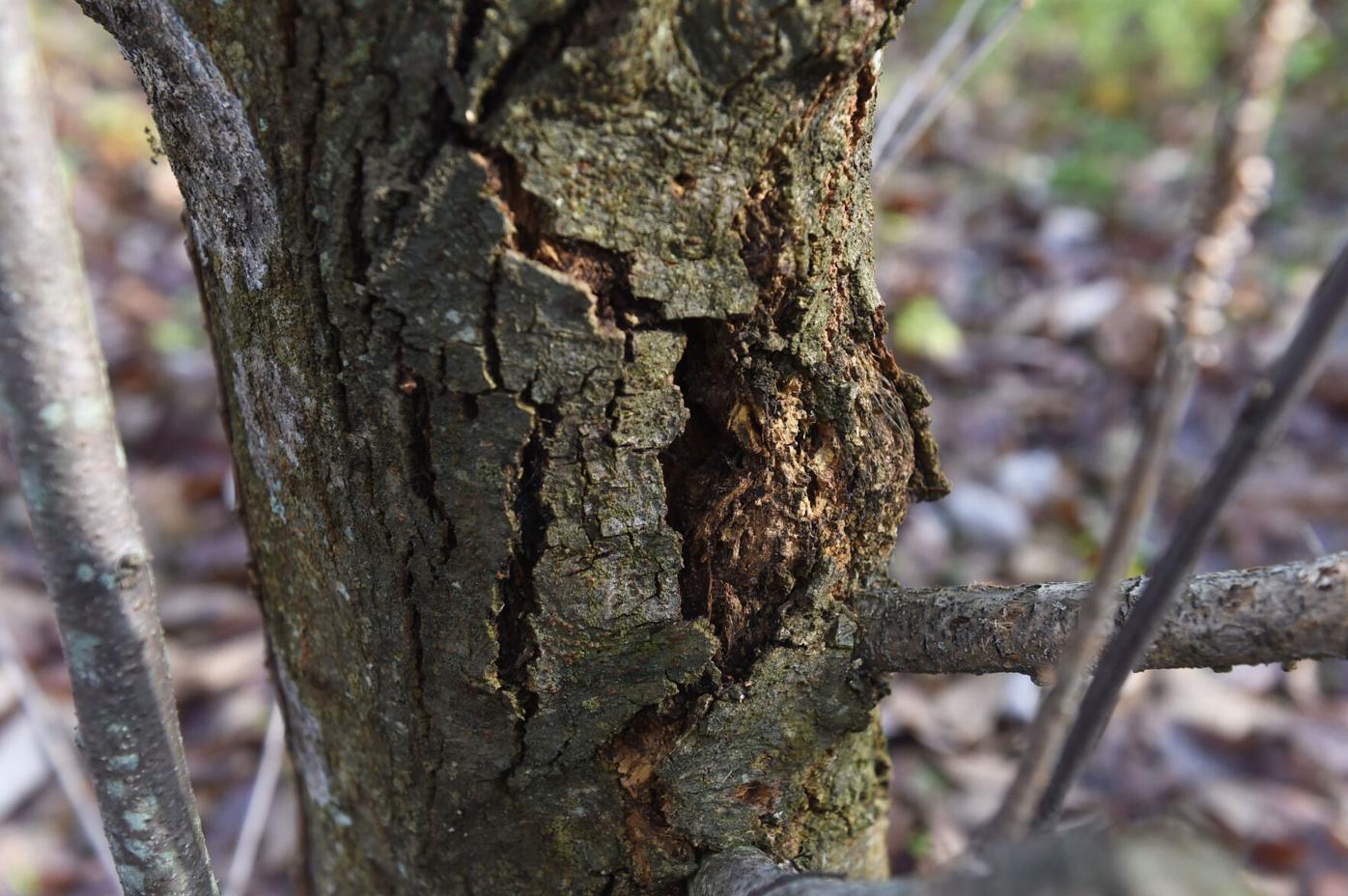 This close-up shot of an American chestnut tree at House Rock Nature Preserve in Martic Township shows damage caused by an invasive fungus that nearly wiped out the native trees. Local expert Tim Eck showed off the trees at the preserve Saturday Oct. 31 2020. 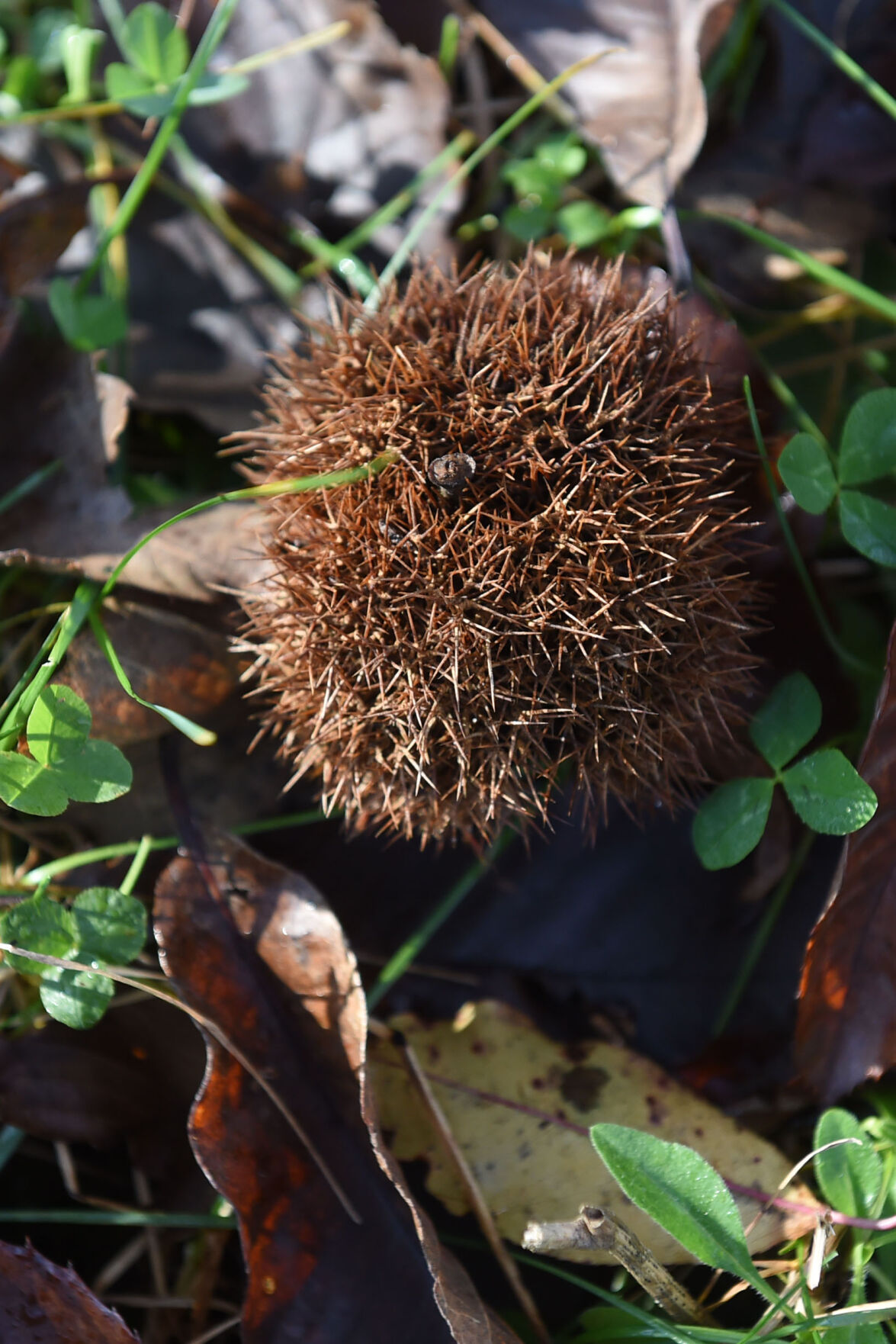 Local expert Tim Eck looks up at a native chestnut tree at House Rock Nature Preserve in Martic Township Saturday Oct. 31 2020. There, he spoke about the invasive fungus that nearly wiped them out.

Local expert Tim Eck points up at a native chestnut tree at House Rock Nature Preserve in Martic Township Saturday Oct. 31 2020. There, he spoke about the invasive fungus that nearly wiped them out.

Leading the way down a grassy lane on an October morning, Tim Eck paused regularly to look skyward and examine the treetops bordering a narrow path cutting through a southern Lancaster County chestnut orchard.

But in a fenced-off portion of the House Rock Nature Preserve, Eck turned his attention to the trees’ trunks, pointing out their splitting bark -- a signal of disease.

The trees, he said, were hybrids of the American chestnut, a species rendered functionally extinct by a destructive, invasive fungus that arrived in the United States from Asia at the beginning of the 20th century. The damaged bark was evidence of the fungus’s toll.

Eck and like-minded conservationists spend hundreds of hours each year on breeding fungus-resistant trees, part of a decades-long effort to restore a tree species that once dominated the forests of the eastern states.

Still, Eck, a local, stressed that his commitment to the restoration effort is based on ecology.

And the ecological benefits could be numerous, according to Christopher Hardy, a plant science professor at Millersville University.

At their peak, about one out of every four trees in local forests were American chestnuts, Hardy said, citing past research.

“Losing one in four trees in the Pennsylvania forests had a major impact on both the ecology and economy of our region,” Hardy said.

He noted the woodland animals that once fed on the chestnut seeds. After the blight took hold, those animals were forced to adapt, relying instead on oaks and maples for food: “These are not generally considered as high-value a food source for animals,” Hardy said.

Lumber workers also lost out with the demise of the chestnuts, Hardy said, explaining that once-abundant chestnut wood was highly valued for its beauty and rot resistance.

“It’s hard for us to imagine of the economic losses experienced by those in the wood industry, a major part of Pennsylvania’s economy then,” Hardy said. “But it was severe.”

The wood of American chestnuts was so widely used that they were referred to as cradle-to-grave trees, used to build “everything from cribs to coffins,” said Sara Fitzsimmons, a restoration director with the American Chestnut Foundation.

Fitzsimmons, based at Penn State University, said that after the arrival of the blight, billions of native chestnuts across the Appalachian region were destroyed in just a few decades.

“It basically chokes it of nutrients,” Fitzsimmons said of the fungus’s effects.

While many of the trees are able to survive at the root level and even resprout, Fitzsimmons said the fungus prevents them from reproducing and growing to their natural size, reducing their ecological benefits and rendering them “functionally extinct.”

Looking for a remedy, researchers with the American Chestnut Foundation have been working for decades to develop fungus-resistant trees.

Both of those methods have been decried by native chestnut purists, who believe the American trees’ genes must remain unaltered for restoration to be a success.

There, Eck purposely inoculates the chestnuts with the fungus, returning later to identify the trees that best resist its harmful effects. Those trees then can be further bred with hopes of creating even more blight-resistant trees, he said.

“You take the resistant hybrids and you ‘backcross’ them to an American parent. Now you’ve got trees that are genetically more American than Asian,” he said, explaining that process is then repeated. “The ultimate goal of this approach is to have chestnut trees that are completely American except for the one or few Asian genes that confer resistance.”

Then, theoretically, the trees could be successfully reintroduced into the wild, he said.

The House Rock orchard is one of a few chestnut restoration sites in the county.

For Fitzsimmons, the goal of that restoration work is bigger than simply seeing American chestnuts return. It’s also about responding to a growing number of invasive species -- the spotted lanternfly, emerald ash borer and hemlock woolly adelgid, to name a few -- threatening other native plants.

“Our forests are under attack. You have got these things, these threats that continue to hammer our forests,” she said. “You have got to find a way to create a template for protecting our forests and restoring our trees. It’s going to get worse before it gets better.”

Eck was more matter of fact about the effort, which he’s been volunteering for since at least the early 2000s. In his mind, globalization means invasive species will continue to wreak havoc on native plants. We have to accept that, he said, revealing that he’s disappointed that the chestnut restoration effort has taken this long.

“Frankly, I think all attempts at excluding these invaders are going to be futile,” Eck said. “It may be time to give up on pure, American, native plant fanaticism and acknowledge that the world is changing. The idea is to make sure that we have an environment that survives. Not a particular species.”