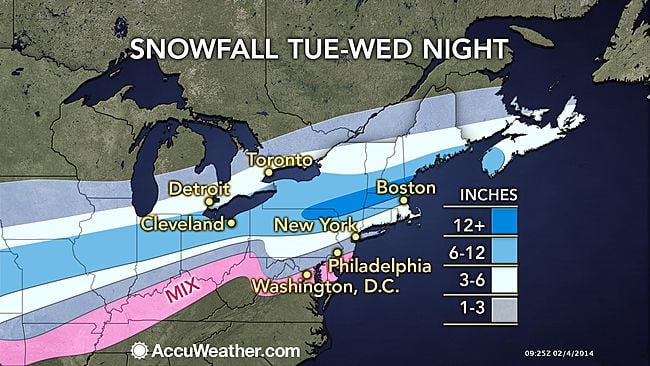 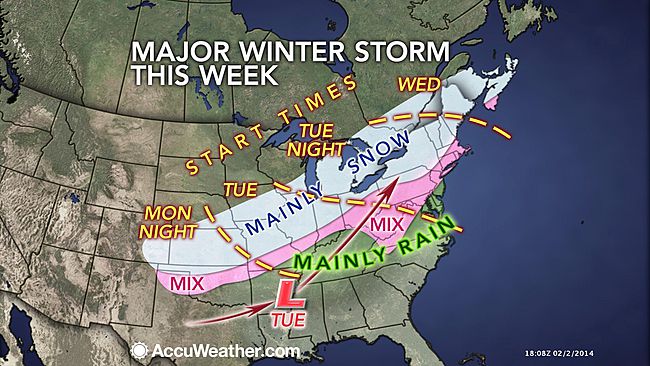 Lancaster County will get a mix of snow and ice Tuesday night into Wednesday, AccuWeather says.

Lancaster County will get a mix of snow and ice Tuesday night into Wednesday, AccuWeather says.

We made it through phase one of what will perhaps be a week featuring a three-headed monster of winter weather.

But is the worst yet to come?

Most of Lancaster's public schools and some private schools are running on two hour delays this morning after yesterday's snow brought up to 9 inches of snow to Lancaster county.

The National Weather Service has issued a winter storm warning for Lancaster that is in effect now through Wednesday at 4 p.m.

But first, for Tuesday, expect temperatures to rise to around the freezing mark for a high during the day.

Use caution during your morning commute and be aware of slick spots that might have frozen over during the night time hours.

Throughout the day Tuesday, clouds will increase and the next storm will move in, said Eric Horst, Millersville University meteorologist.

Tuesday's storm will begin with an hour or two of snow and sleet around midnight, likely not giving us a lot of accumulation.

Then the real fun begins.

An extended period of freezing rain is possible, into early Wednesday, just in time to complicate and snarl the morning commute.

By lunchtime, temperatures should have risen enough that whatever precipitation is still lingering will turn into plain rain, Horst said.

According to the National Weather Service winter storm warning, accumulations could be between 2-6 inches of snow and sleet along with 1-2 tenths of an inch of freezing rain.

The warning says most of the snow accumulation will be in the northern parts of the state while most of the freezing rain will occur closer to the Maryland border.

Then the weekend will bring another storm, during a winter that already has given us well over the usual amount of snow.

Another shot of cold air will hit us Thursday and Friday, with partly sunny skies and temperatures in the upper 20s to low 30s.

Horst said the storm could have one or two parts, and if those parts converge and the timing of them will impact the amount of snow we could get.

But forecasters are expecting a white weekend.

The National Weather Service is calling for the chance of snow Saturday and Sunday. AccuWeather has snow in its forecast for Sunday.

Watch: Meteorologist Eric Horst talks about the next storm headed our way

The next storm is expected to follow closely on the heels of the sleet and snowfall that began falling across Lancaster County early this morning.