A panoramic image of Lancaster City skyline as storms move through the area on Tuesday, June 30, 2015. 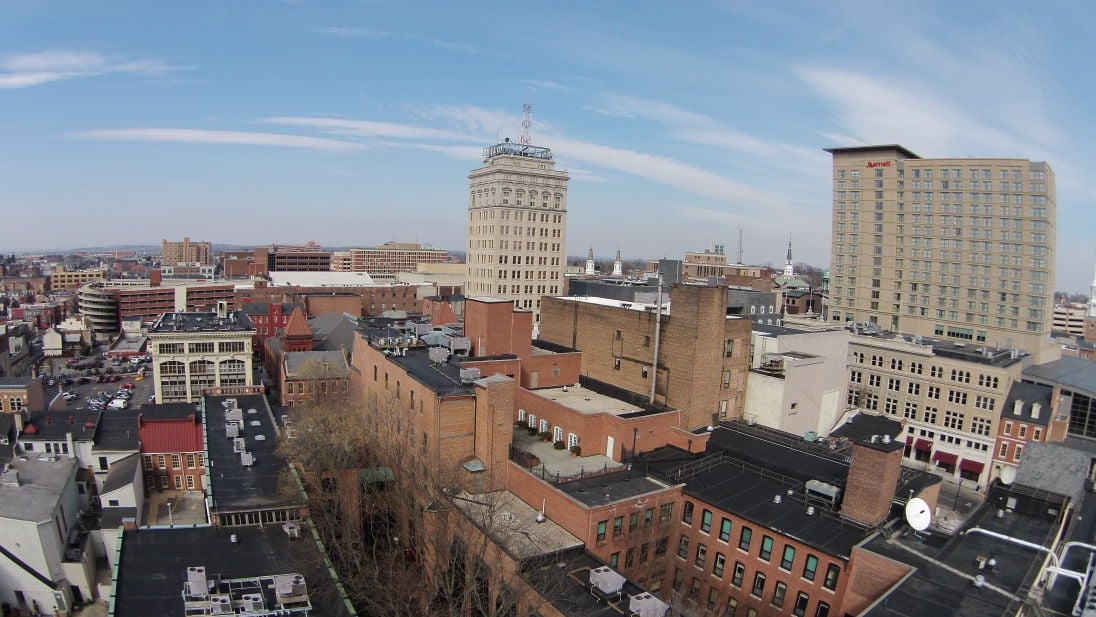 An aerial view of downtown Lancaster in 2015.

File Photo - More than 300 people show support for immigrants and refugees in Lancaster County during a May 1, 2017, rally organized by Church World Service and #LancasterStandsUp at Penn Square in Lancaster.

The majority of lawmakers, leaders and law enforcement officials representing Lancaster agree: Lancaster shouldn't declare itself as a sanctuary city.

The question was posed by Elizabethtown resident Timothy Runkle as part of LancasterOnline's new reader-powered journalism project, We the People.

Runkle asked: “Does immigration put Lancaster at risk or should Lancaster embrace its long tradition of resettlement and declare itself a sanctuary city?”

What is a sanctuary city?

According to The American Civil Liberties Union, sanctuary city is not a term with a distinct or agreed-upon meaning.

“It generally refers to law enforcement policies directing police and other agencies to deliver services equally to their residents, focus on their core missions and leave the deportation business to the federal government,” ACLU staff attorney Molly Tack Hooper said.

According Jessica Vaughan, director of policy studies for the Center for Immigration Studies, a sanctuary city is a city that has a policy that promotes interfering with federal immigration authorities in doing their job.

That interference takes different forms, she said, from prohibiting officers from contacting Immigration and Customs Enforcement (ICE), blocking ICE access to jails or ignoring detainers. A detainer is a notice to law enforcement agencies that ICE intends to take custody of someone in their custody.

ICE, however, doesn't acknowledge the term “sanctuary city,” an ICE official said, calling it a term that has been coined by external organizations.

What stories do you want to see LancasterOnline report? Submit your questions here [We The People]

What about Lancaster's history of resettlement?

A report by BBC News in January called Lancaster “America's refugee capital,” saying that Lancaster has taken in 1,300 refugees since 2013 or 20 times more per capita than the rest of the country.

But there's a difference between welcoming refugees and being a sanctuary city, according to Vaughan.

“(A sanctuary city) is not is a policy that simply states that immigrants are welcome in a community or that local authorities are not going to enforce immigration laws,” she said.

Fewer than 5,000 people, or 0.3 percent of the population, live in Lancaster without legal permission, according to a Pew Research Center report based on 2014 U.S. Census data.

Does immigration put Lancaster at risk?

Lancaster city police cooperate with ICE, but they don't seek out people who are living here without legal permission, according to Chief Keith Sadler.

If ICE plans to come to Lancaster to make an arrest, the police department gets a call, but it's not often, he said.

The most recent ICE visit to Lancaster was about four months ago, Sadler said. ICE officials said they were coming to look for someone involved in a child pornography case, he said. They didn't make any arrests.

“The perception that ICE comes into Lancaster city and kicks doors down is just not true,” Sadler said.

The federal group is overworked, he said. They're not going to come to look for people living in Lancaster without legal permission who have committed petty crimes, he said.

“Most of our serious crimes are committed by locals, people who have been living here a long time,” Sadler said.

Lancaster Mayor Rick Gray has said that he doesn't use the term sanctuary city because he doesn't know an official definition of what it is.

“Are we a sanctuary city? We don't go around making inquires into public documentation. Our job is to enforce the law and the ordinances of our city,” Gray said.

Anyone taken into custody by city police is held for a few hours before being turned over to the Lancaster County Prison, Gray said.

At that point, the prison honors detainers from ICE, according to Lancaster County Commissioner and prison board chairman Josh Parsons.

“We have a professional working relationship with ICE,” Parsons said.

The prison does not track how many detainers have been issued for inmates, but he estimated ICE picks up between two and five inmates a month.

District attorney Craig Stedman said it is “outrageous to consider a policy which requires local police to shield criminals.”

“When law-enforcement agencies do not cooperate and exist in their own silos then the law-abiding will suffer and criminals flourish,” Stedman said.

The closest neighboring city that has declared itself a sanctuary city is Philadelphia, which has a population of undocumented immigrants in the Northeast second only to New York, according to Pew Research Center.

There were over 160,000 undocumented immigrants in Philadelphia in 2014, Pew said, based on the most recent census data. That's 2.6 percent of the total population.

Philadelphia was first declared a sanctuary city in April 2014. It was reinstated by Mayor Jim Kenney after he was elected in January 2016.

There is no legal or uniform definition of what constitutes a “sanctuary city,” according to a fact sheet from the city to which the mayor's office directed LancasterOnline.

Here are a few facts about how Philadelphia explains its sanctuary city stance:

Do politicians think Lancaster should be a sanctuary city?

Just one of the four candidates for mayor of Lancaster in the November election think the city should be declared a sanctuary city.

Tony Dastra, independent candidate, said he would like to see Lancaster become a sanctuary city similar to Philadelphia.

“We're trying to keep families together, treat people with dignity, and understand that our deportation system is overburdened, which makes this process extremely unfair,” he said.

The other three mayoral candidates disagree with Dastra.

“Do we elevate the risk of separating parents from their children or the deportation of young adults who have grown up in America ... by labeling ourselves a sanctuary city? Do we jeopardize critical funding to make a statement that ultimately does not change current practice?” Sorace wrote in an email.

“I will not support the police department taking on additional duties related to immigration enforcement,” Stewart said in a statement.

Stewart said she's an advocate for Lancaster remaining a welcoming and inclusive city where everyone has an expectation of safety.

“A criminal offender's immigration status should not have any bearing on local police action,” he said.

What about state lawmakers?

Although their reasons differ slightly, state lawmakers who represent Lancaster agree that it should not declare itself a sanctuary city.

Rep. Mike Sturla said he believes it would be “ill-advised” for Lancaster to officially call itself a sanctuary city because of proposed policies that could cut off state or federal funds.

But the city could still enforce the same policies such as not requiring local police to ask for proof of citizenship during routine traffic stops or other cases, said Sturla, a Democrat who has represented the city in the state House since 1994.

State Sen. Scott Martin, a Republican who represents Lancaster city and the southern half of the county, supports the idea of withholding state and federal funding for sanctuary cities.

“Most of our serious crimes are committed by locals, people who have been living here a long time,” Sadler said.

He wrote in an email he believes “there should be no sanctuary cities, especially in Lancaster County,” that the concept has been politicized and taken out of context.

“To encourage laws to be ignored or broken is un-American, jeopardizes the safety and security of our communities, and opens the door for any other law to be broken in the future,” Martin wrote.

Martin and state Sen. Ryan Aument, R-Landisville, both co-sponsored and voted for a state bill to stop state funds going to sanctuary cities. Aument does not believe it would be appropriate for Lancaster city to become one, his chief of staff Jake Smeltz said.

U.S. Rep. Lloyd Smucker, a Republican who represents most of Lancaster County with the 16th Congressional District, also does not support the idea of sanctuary cities.

In late June, he voted in favor of two Republican-backed bills that would withhold federal grants from them and that would increase sentences for criminals who have returned tothe U.S. after being convicted and deported.

Smucker did not return requests for comment regarding why he supported the bills or whether he believes people living in Lancaster without legal permission put the city at risk.

Timothy Runkle wanted to ask a question that was provocative and piqued people's interest, he said.

Contacted by LancasterOnline after his question won the first voting round for We The People, Runkle said the first part of answering his question is making sure that readers understand what a sanctuary city is.

Here's his definition: “A sanctuary city is a municipality which limits its cooperation with the national government effort to enforce immigration law.”

Runkle follows up his definition with a caveat: “I think it is important that we understand what this means, because many people confuse that definition with municipalities that accept refugee resettlement.”

Runkle, a 33-year-old Elizabethtown resident, said he's fascinated by Lancaster's history of welcoming and resettling refugees – a group, he says, that is different than people who live here illegally.

And that's where his question comes in: should Lancaster embrace its tradition of resettling refugees and apply it to those who living in Lancaster illegally? Or does that put Lancaster at risk?