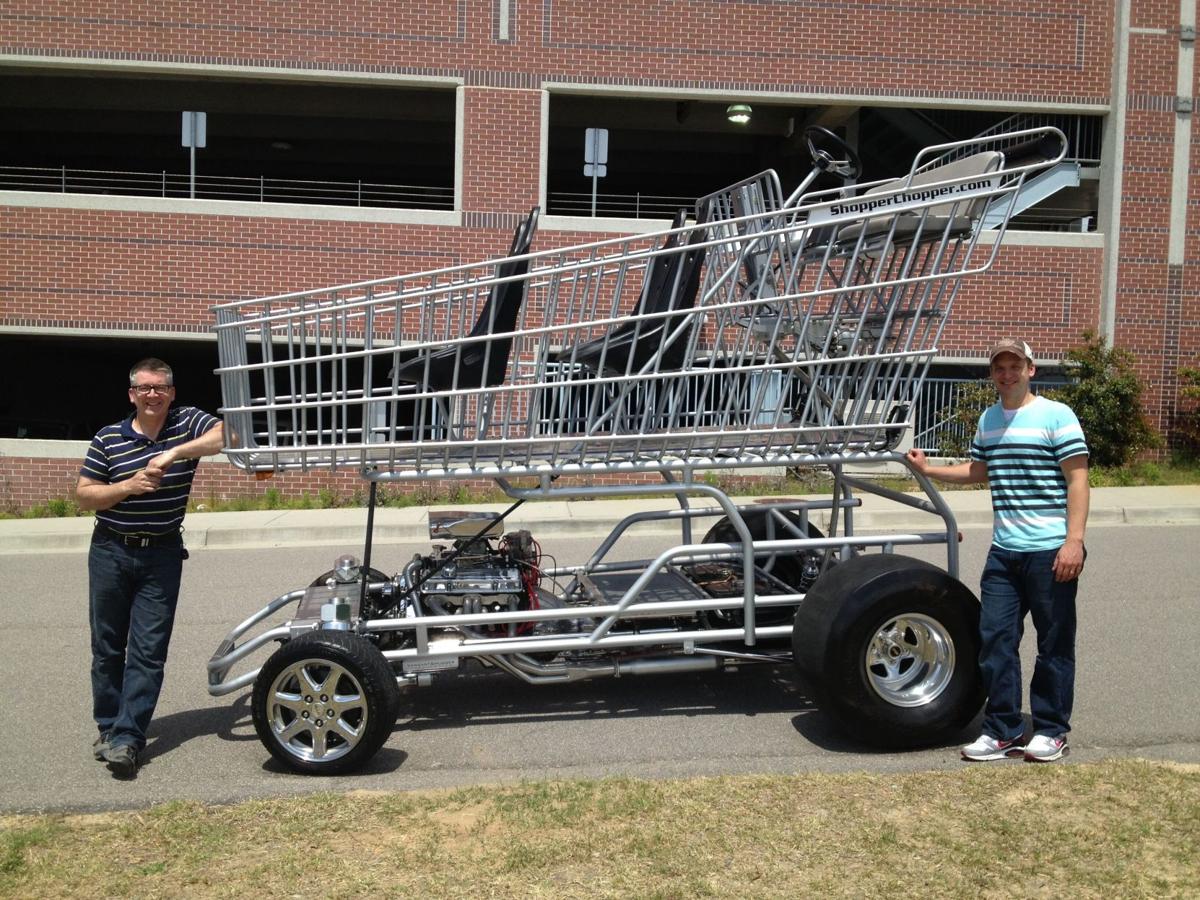 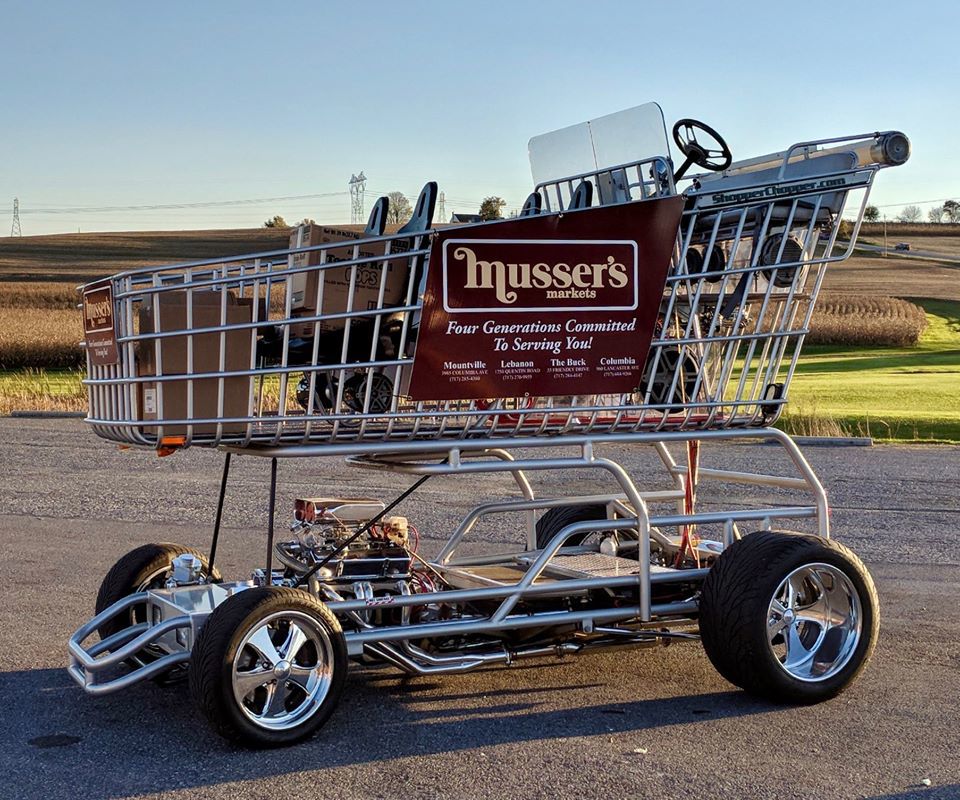 The Shopper Chopper was built to help promote Musser's Markets. 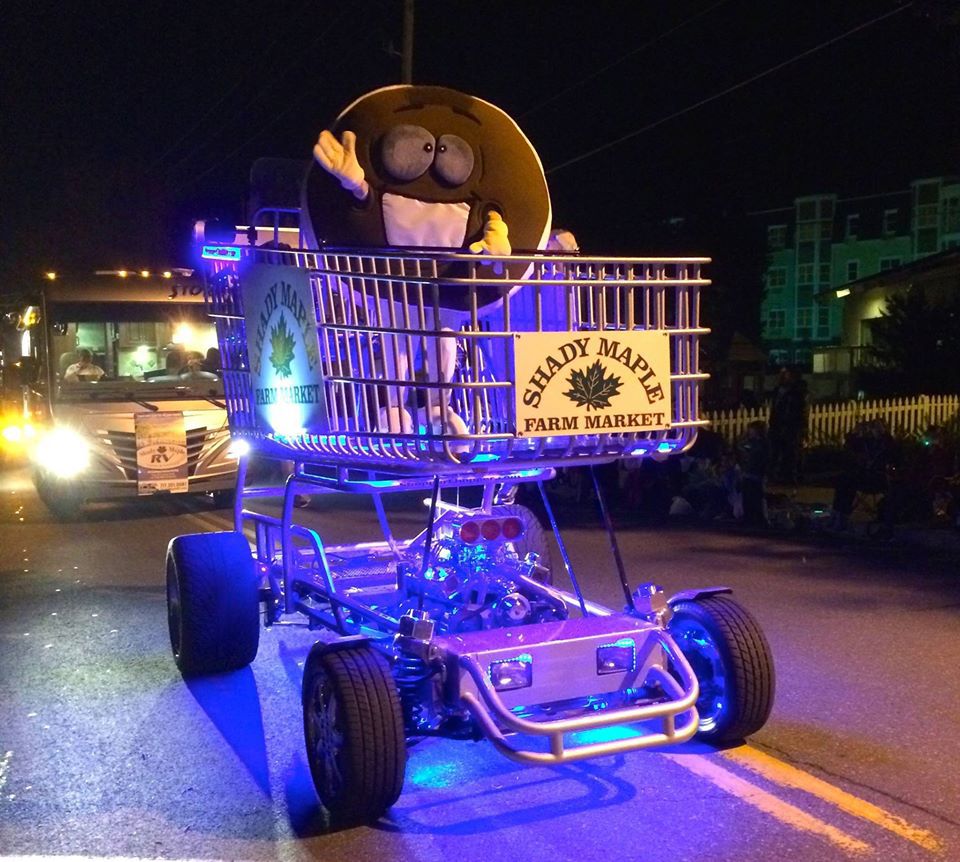 The Shopper Chopper was used to promote Shady Maple Farm Market during the 2014 Ephrata Parade. 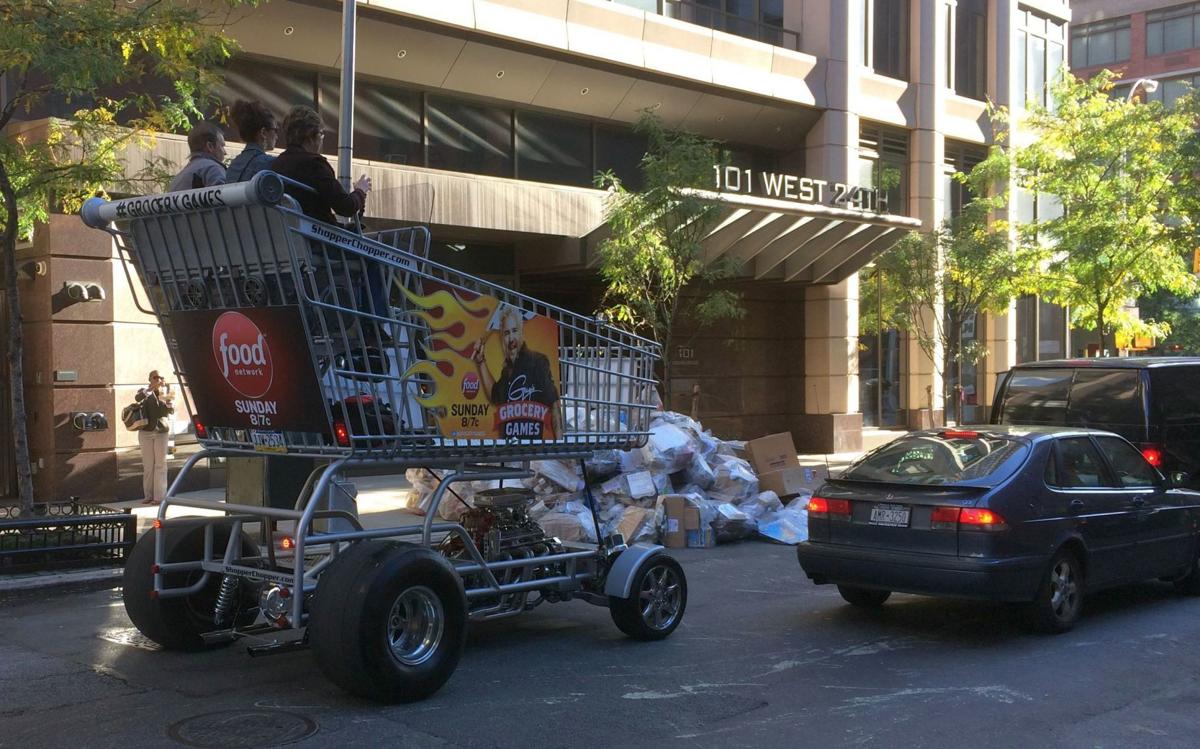 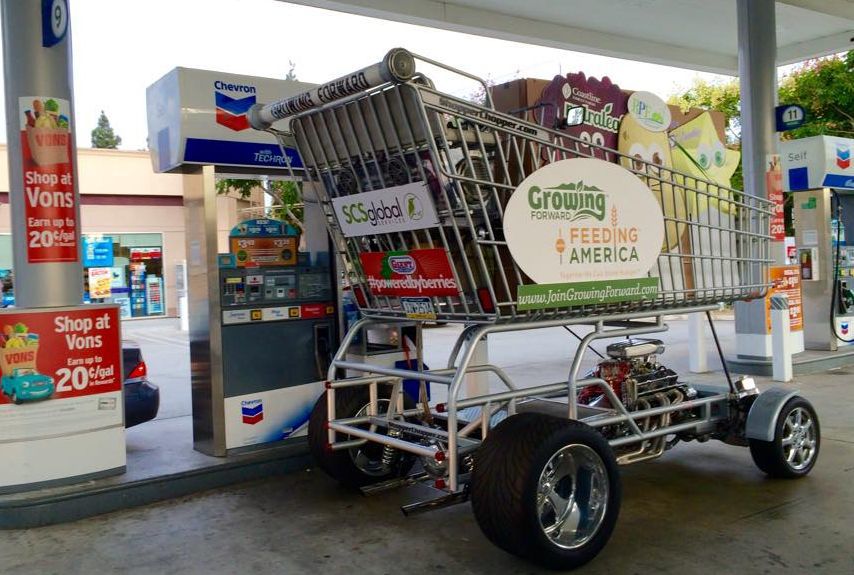 The Shopper Chopper refueling at a gas station in California. 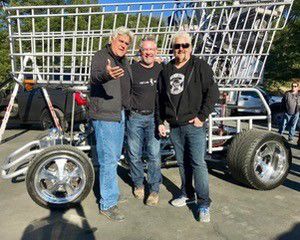 Calvin Van Sant flanked by Jay Leno and Guy Fieri during a break in the shooting for "Jay Leno's Garage." 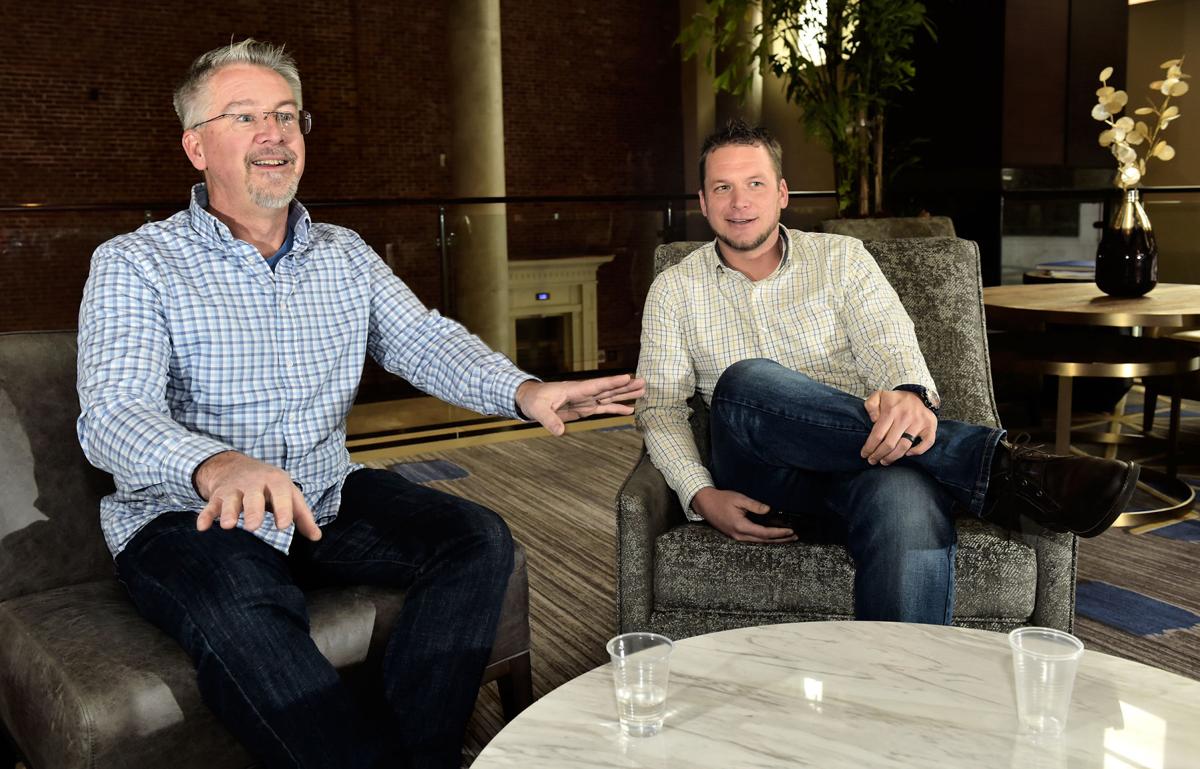 Calvin Van Sant and Brent Musser, in a recent interview about the Shopper Chopper.

The Shopper Chopper was built to help promote Musser's Markets.

The Shopper Chopper was used to promote Shady Maple Farm Market during the 2014 Ephrata Parade.

The Shopper Chopper refueling at a gas station in California.

Calvin Van Sant flanked by Jay Leno and Guy Fieri during a break in the shooting for "Jay Leno's Garage."

Calvin Van Sant and Brent Musser, in a recent interview about the Shopper Chopper.

“We wanted to make a big splash,” said Adam Davis, a media planner with Noble People, the agency that worked with BJ’s.

Without knowing whether such a thing existed, Davis and his colleagues brainstormed the idea of driving a huge shopping cart in the Woodward Dream Cruise, the classic car show in Detroit that drew about 1.5 million people and 40,000 vehicles in August.

“We Googled ‘giant drivable shopping cart’ — and there is only one,” Davis said.

The brainchild of Calvin Van Sant and his son-in-law Brent Musser, The Shopper Chopper was originally built to promote Musser’s Markets.

Following two years of welding, engineering and weekends working in the garage behind Van Sant’s Kirkwood home, the 9-foot tall, 12-foot long grocery cart debuted at the 2012 Solanco Fair parade. It has been used at other local parades as well as the annual Make A Wish truck convoy.

The giant shopping cart powered by a 340-horsepower Chevy engine also has been used by celebrities. It appeared on “Good Morning America” in a segment for celebrity chef Guy Fieri and an episode of “Jay Leno’s Garage.”

“Weird is the way to describe it,” said Van Sant, a 56-year-old patent examiner. “We knew we could get some local business, but I had no idea what it would grow into.”

Building on an idea

In the late 2010, Brent Musser, one of the six owners of Musser’s Markets, had the idea of putting a shopping cart on top of a lawnmower engine and entering it in the Solanco Fair parade the next year.

Van Sant, who had restored some old tractors, took that idea and ran with it.

Instead of a lawn mower, the metal cart frame Musser and Van Sant built was mounted on the front axle of a former Crown Victoria police cruiser and the back axle of a Dodge van.

From the beginning, the goal was to make the shopping cart street-legal, a feat accomplished by using a part of the vehicle code that allows garbage trucks to be driven from alternate positions.

“It makes a lot more sense if you can drive it whenever you want,” Van Sant said.

Initially, Van Sant and Musser weren’t sure they’d ever get it to work, but once they did, it became clear their giant cart was destined for big things.

“I don’t think it was too long into building when we realized there was a business there,” Van Sant said.

Originally built to promote Musser’s Markets, the Shopper Chopper has outlived that family-owned chain with locations in Quarryville and Mountville that was sold to Giant in October.

The Shopper Chopper was unaffected by that sale because it always has been operated as a separate business owned by Van Sant and Musser. Musser still has a full-time job with Musser’s, which has real estate holdings, a beer distributorship and retail tobacco business.

Van Sant declined to estimate the revenue from the Shopper Chopper, but said they have been able to cover the expenses and fund continual upgrades.

“It is truly a hobby business that lets us travel to new cities in the U.S. and Canada, but it does make a modest profit to make it worth all the effort,” Van Sant said. “We don’t need to pay our mortgage with this.”

Since 2012, the giant shopping cart has participated at 109 paid events and made 30 to 40 mostly local charity appearances.

“Every year it seems like we do bigger events,” Musser said.

While the cost to rent the Shopper Chopper varies, the typical setup begins with a $900 daily fee for eight consecutive hours plus costs for travel and lodging. For a trip to California, those expenses can add up to around $8,000.

For Van Sant and Musser, that can sometimes leave them with free trips, such as one earlier this month to Pensacola, Florida, where the Shopper Chopper was used to promote another store opening for BJ’s Wholesale Club.

While Van Sant and Musser returned home, the Shopper Chopper won’t be back in storage at the Buck until April because of another event in Florida followed by a trade show in Las Vegas.

During the BJ’s Wholesale promotion last August in Detroit, the Shopper Chopper attractive plenty of attention, including from the Detroit News, which listed it among the “5 really weird cars” at the car show.

“It was the biggest hit there was,” said Davis, who rode in the car, which can seat up to six people. “Every single place we drove by people were ready with their phones out.”

During that trip to Detroit, the Shopper Chopper found a new type of client, making its way into a music video by Detroit-based rapper Bayby Juls for his song “Big Cart.”

Wearing a Johan Franzen Detroit Red Wings Jersey, the video shows the rapper driving around Detroit, waving to friends and making a stop at a playground.

“Hey. Hey, do you want to ride in my big cart?” the rapper sings. “Drive it to the end of the road because she knows I have a big heart.”

62: Length, in seconds, of the spot on Jay Leno’s Garage