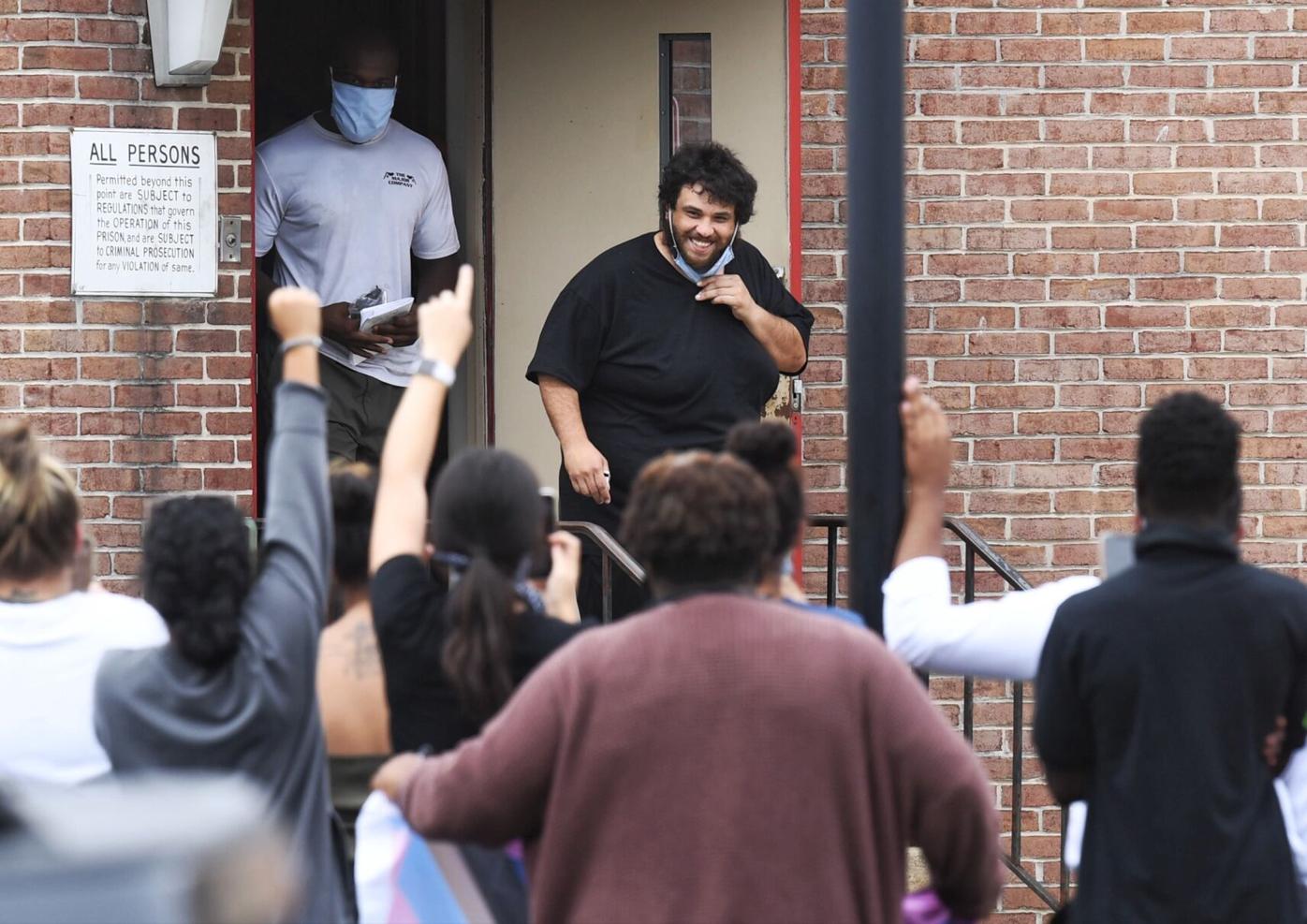 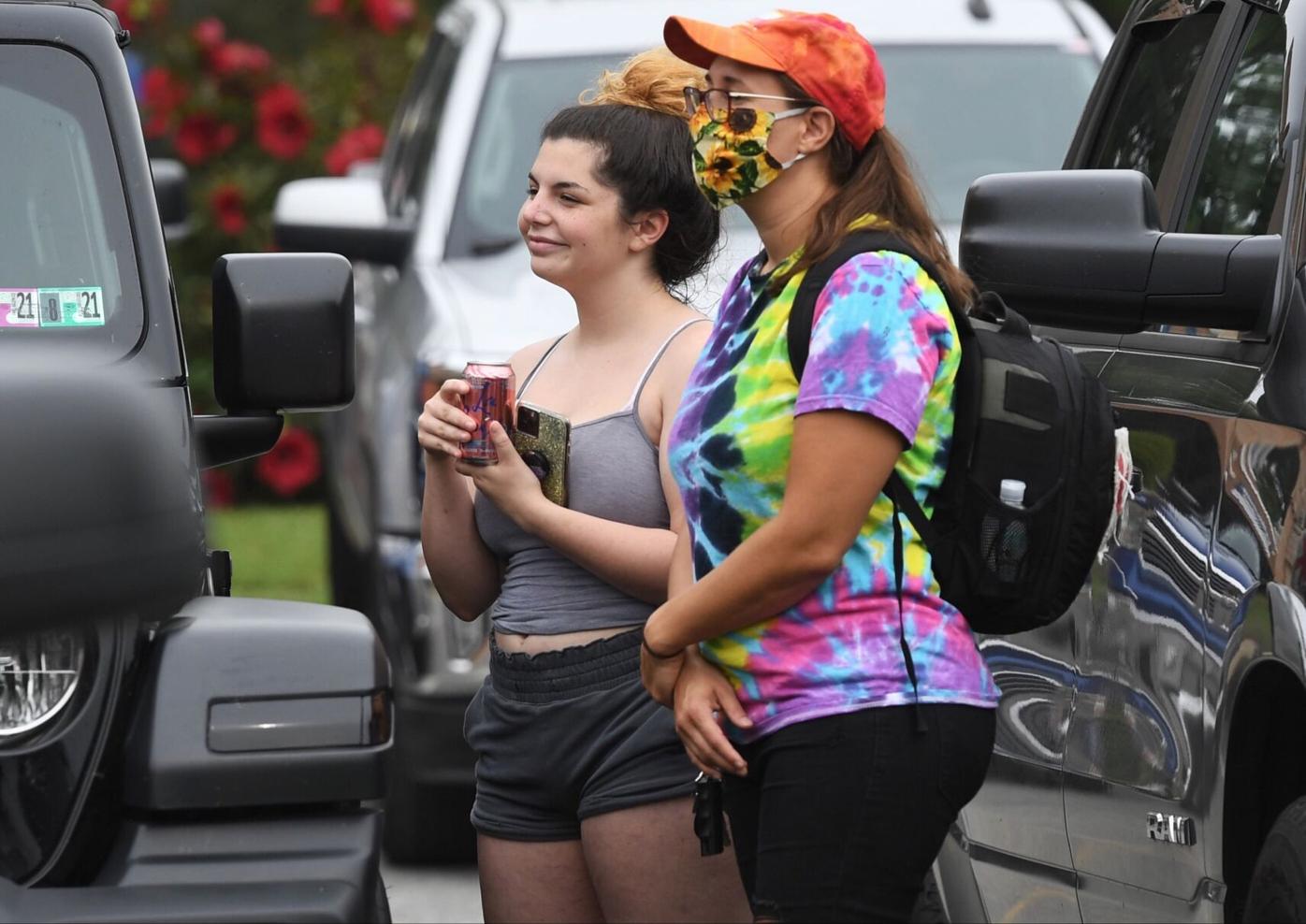 Talia Gessner (left) was released after her bail was reduced from $1M to $50,000 monetary. 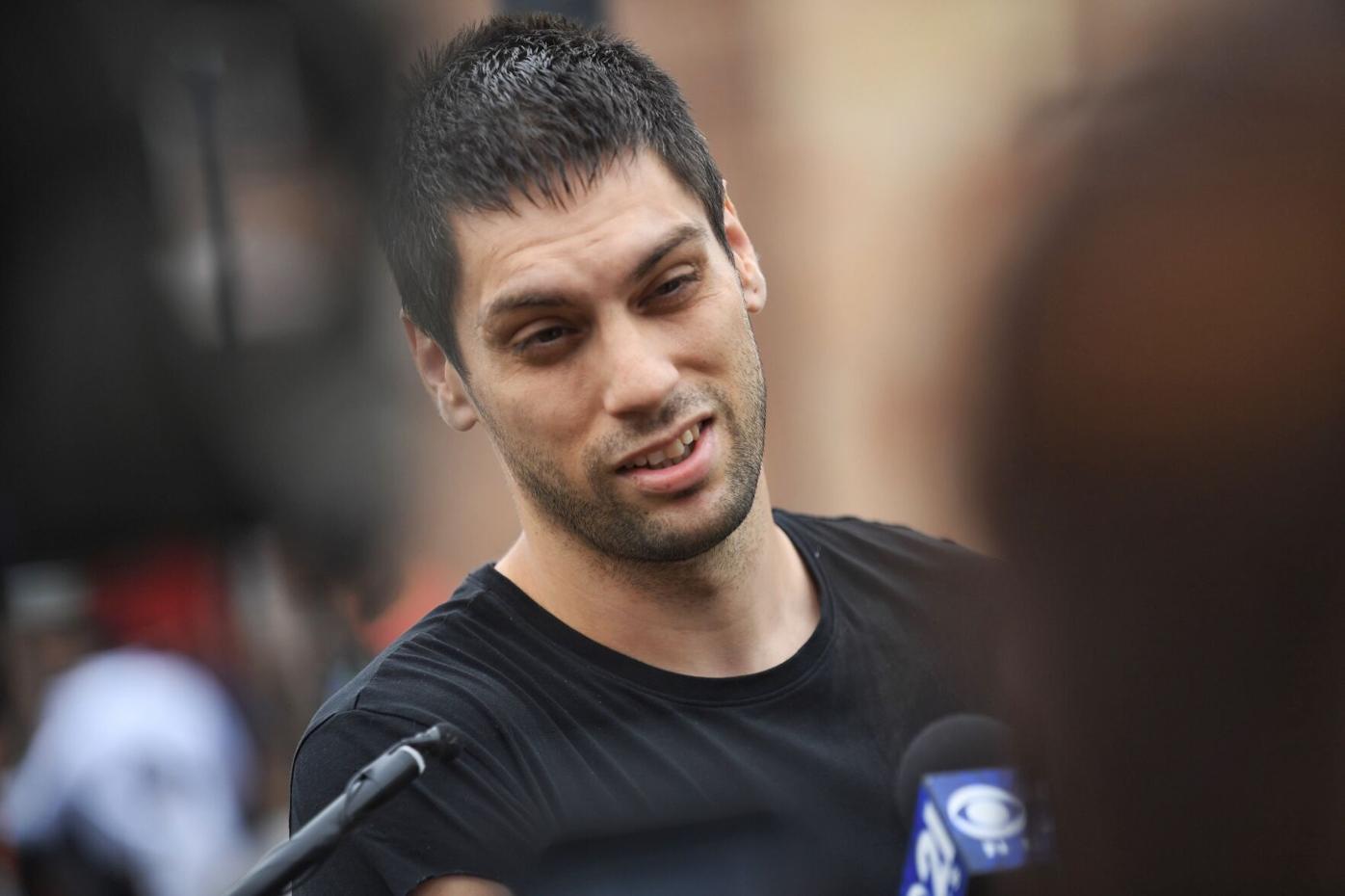 Jones had his bail reduced from $1m to 100,000 unsecured. “I’m not antifa,” Jones told media outside of the prison. “I love this country.” He also said he supports law enforcement. 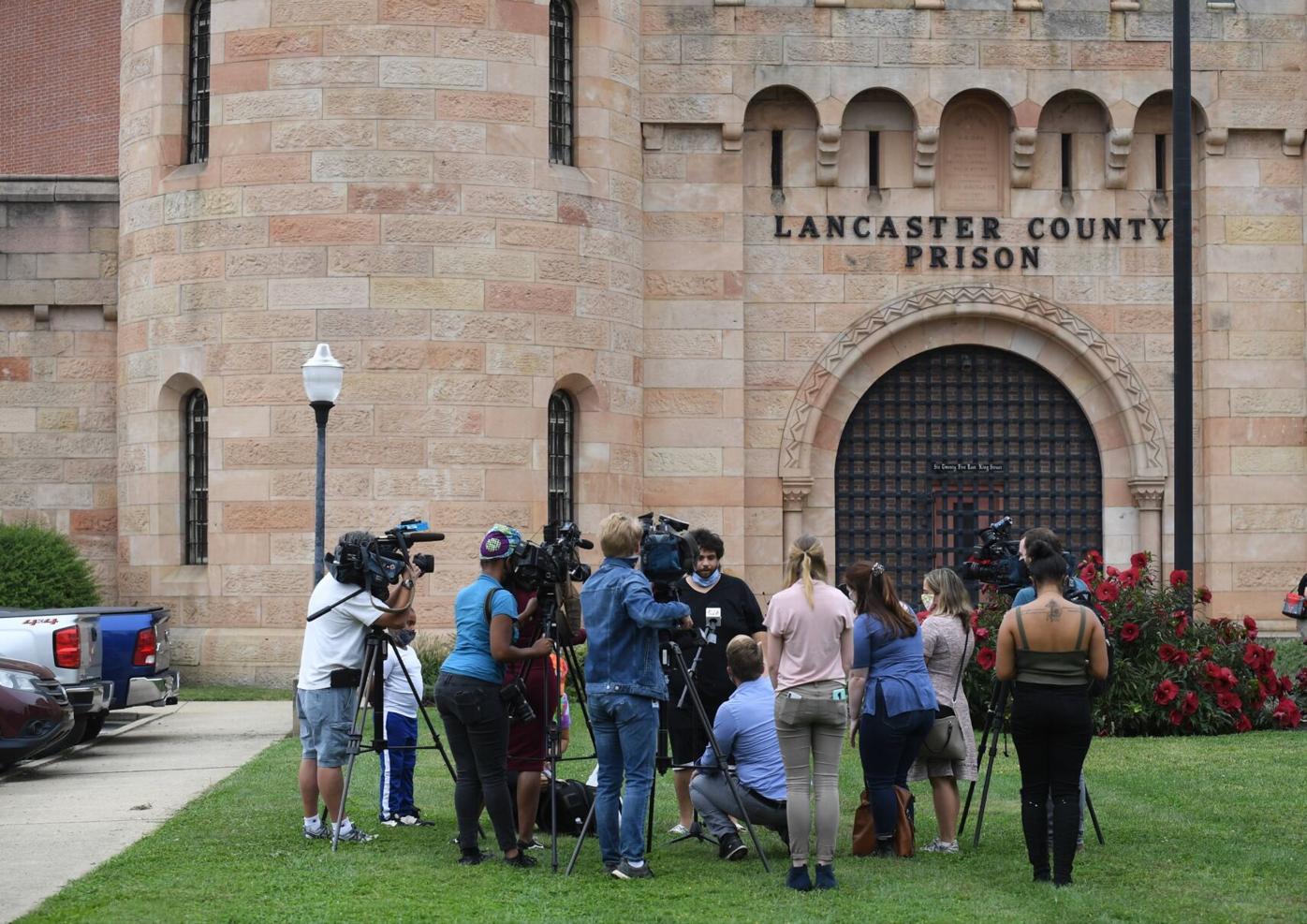 Dylan Davis speaking with the media following his release.

When Dylan Davis showed up outside the Lancaster city police station on Sunday night, he said he was there to do what he’s done since late May: protest the police killings of Black people.

But that protest devolved into a riot early Monday morning, with some protesters destroying property, blocking a street and setting a Dumpster on fire. Davis and 12 other protesters were arrested on arson- and riot-related charges.

Davis was one of seven protesters released on bail Thursday, hours after a Court of Common Pleas judge reduced the $1 million bail initially ordered in his case to just $50,000.

“I’m here, but I’m not sure why I’m here,” Davis said Thursday minutes after walking out of the prison. He said he did not set fires, throw objects or even curse at police during the protest and confrontation that stretched into the early hours of Monday morning.

Lancaster city is one of hundreds of cities throughout the world where protests were held in the wake of the Memorial Day killing of George Floyd, a Black man, during an arrest by Minneapolis police officers.

Protests erupted Sunday again after a Lancaster city police officer shot and killed 27-year-old Ricardo Muñoz following a domestic disturbance call to a home on the 300 block of Laurel Street. Muñoz’s body laid on the sidewalk for more than four hours while the district attorney’s office investigated. Later Sunday night, the district attorney’s office posted body camera footage from the incident that showed Muñoz charging at the officer with a knife.

Crowds initially gathered near the scene of the shooting, then moved to the area around the police station on West Chestnut Street. Protests continued throughout the night, with police using chemical munitions and riot gear to disperse the crowds after protesters blocked the station’s vehicle ramp.

District Court Judge Bruce Roth initially set the bail for eight of the protesters at $1 million, drawing criticism from civil rights and criminal justice reform groups who said the severity of the crime did not justify such a high amount.

Several of the people arrested face felony arson, riot and vandalism charges, among other counts.

Davis was released Thursday afternoon, along with Yoshua Dwayne Montague, 23, and Barry Jones, 30.

Jones, after his release, said he supports law enforcement.

“I am not antifa,” Jones said, referencing the radical leftist group known for confronting right wing groups and police, sometimes with violence. “I love my country.”

The protesters were able to secure their release after a judge ordered their bail amounts to be lowered at a Thursday morning hearing at the Lancaster County Courthouse. The protesters who were released are not allowed to be within a block of the Lancaster city police station for anything other than legitimate reason.

All but one protester appeared at the hearing via video. Defendants usually are not present for bail hearings, Judge Dennis Reinaker said during the hearings.

Here's a breakdown of how and why the bail amounts changed:

Enterline's attorney said that she comes from a military family and has no prior convictions. She has ties to Manheim, where she lives, and is a senior at West Chester University. She spent the summer working at the Manheim Auto Auction.

Her mother, Mary Enterline, became emotional when the bail amount was reduced, allowing Enterline to be released from prison today.

Families of Taylor Enterline and Kathryn Patterson embrace their loved ones after several days being held in Lancaster County prison on $1 million bail, getting it reduced to $50,000 unsecured earlier this morning. pic.twitter.com/jXzk9TshmK

Patterson is a junior at Franklin and Marshall College and has been an active member of its Black Student Union, her attorney said.

Wise was the only protester who was not present via video during the hearing.

Assistant District Attorney Travis Anderson told Judge Reinaker that Wise had a "higher level of culpability," during the incident.

Wise lives in Camp Hill with her grandmother and mother and will have to be on house arrest when she is released.

More people getting released here in Lancaster after bail was reduced from $1 million earlier this morning. Dylan Davis, Yoshua Montague and Barry Jones all out on bail pic.twitter.com/fpSwokGC3H

Though Montague did receive a bail reduction, he will still have to post at least $10,000 to be released.

He has a York address and had a concealed firearm on him when he was arrested ADA Anderson said.

Montague shook his head “no” as Judge Reinaker read the new sentence.

Davis will be on house arrest in Ephrata, where he'll live with his parents, upon his release, Reinaker ruled. Davis was living in the city during the time of the protest with his fiancé, his attorney said.

Judge Reinaker began the hearings by saying that Judge Roth didn't need to revisit the bail amounts and gave credit to the Magisterial judge for doing so.

Jones, who lives in York with his parents, denies involvement in the violent protests, his attorney said. He will be on house arrest while out on bail, Judge Roth ruled.

Newman, who was previously listed as homeless, lives in Lancaster, his attorney said.

Judge Roth did lower bail, but Newman will need to pay the full $100,000 to be released from prison.

Newman was legally openly carrying a firearm during the protests, but had "ditched the gun" and ran from police before being arrested, ADA Anderson said.

However, Judge Roth said that they could revisit the bail amount on Monday during the preliminary hearing.

Gessner, from York, was attending her first protest on Sunday, her attorney said, adding that she was helping people who were "tear-gassed."

ADA Anderson countered, and said that she was more involved than just helping others.

Her attorney pointed out that she has ties in York and recently moved to her own apartment. She works for the SPCA in York.

Fry is accused of using a bullhorn to "direct rioters" to "burn it down" on Sunday night, ADA Anderson said.

He has two prior convictions from 2018, on charges of strangulation and terroristic threats.

He was arrested in Binns Park and is on probation.

Other protesters who were arrested during the Sunday night incident include Jessical Marie Lopez, Matthew Modderman, Frank Gaston and a 16-year-old juvenile.

Lopez is being held in prison on $250,000 bail and the juvenile's case is being handled in juveniles' court. Gaston is not eligible for bail because he was on probation prior to his arrest.

Modderman, a client services representative in the Client Solutions department at LNP | LancasterOnline, was being held on $1 million bail but was released on Tuesday night, according to previous LancasterOnline reporting. His attorney told LancasterOnline that he wasn't sure how much cash his client had to post to secure release and that he maintains his innocence.

Next steps for local advocates

Following the bail modification hearings, Lancaster Stands Up, SafeHouse Lancaster and Lancaster NAACP held a press conference where they celebrated the upcoming release of the protesters and called for the end of cash bail.

An attorney from @aclupa said they are heartened the bail was reduced for Lancaster, Pa. protesters, but “ it does not undo the fact that the $1 million bail orders were flagrantly illegal.” pic.twitter.com/piBeIDI7JU

These groups said they had been working with the National Bail Fund Network to secure the money necessary to get the accused rioters out on bail.

More in The coverage so far: Police shot, killed man in Lancaster city; the impacts, ruling and consequences (9 of 34)

An East Earl couple is facing charges after officers found them with heroin, nearly two dozen needles and other paraphernalia in a vehicle out…

Norman Asa Garrison III once joked about the Holocaust, saying “nothing is better than throwing some Hebrews on the fire.”

Dozens of charges were dropped, and others forwarded to Lancaster County Court, during preliminary hearings Monday for most of the protesters …