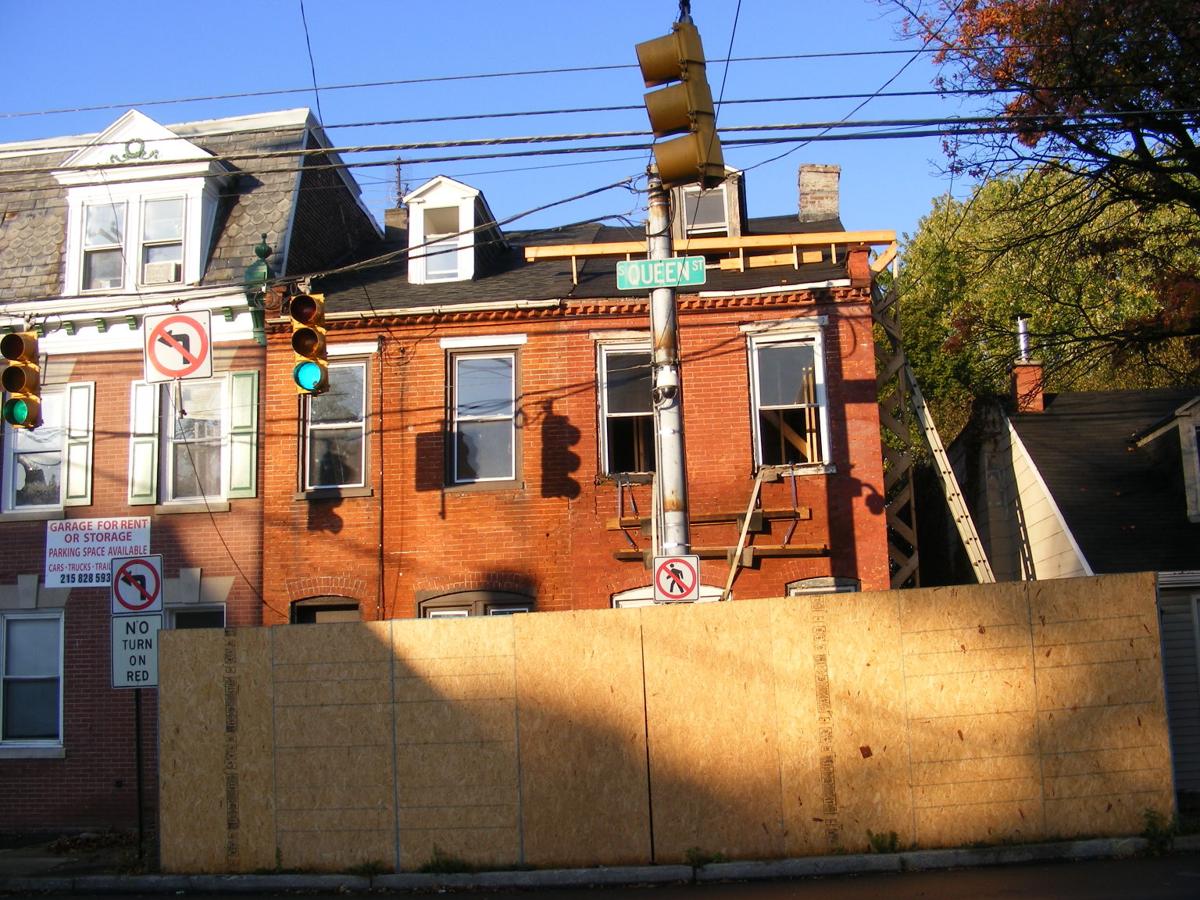 A contractor for the owner of this house at 620 S. Queen St. says it's essential for safety. The city says no permit was obtained to block the sidewalk. 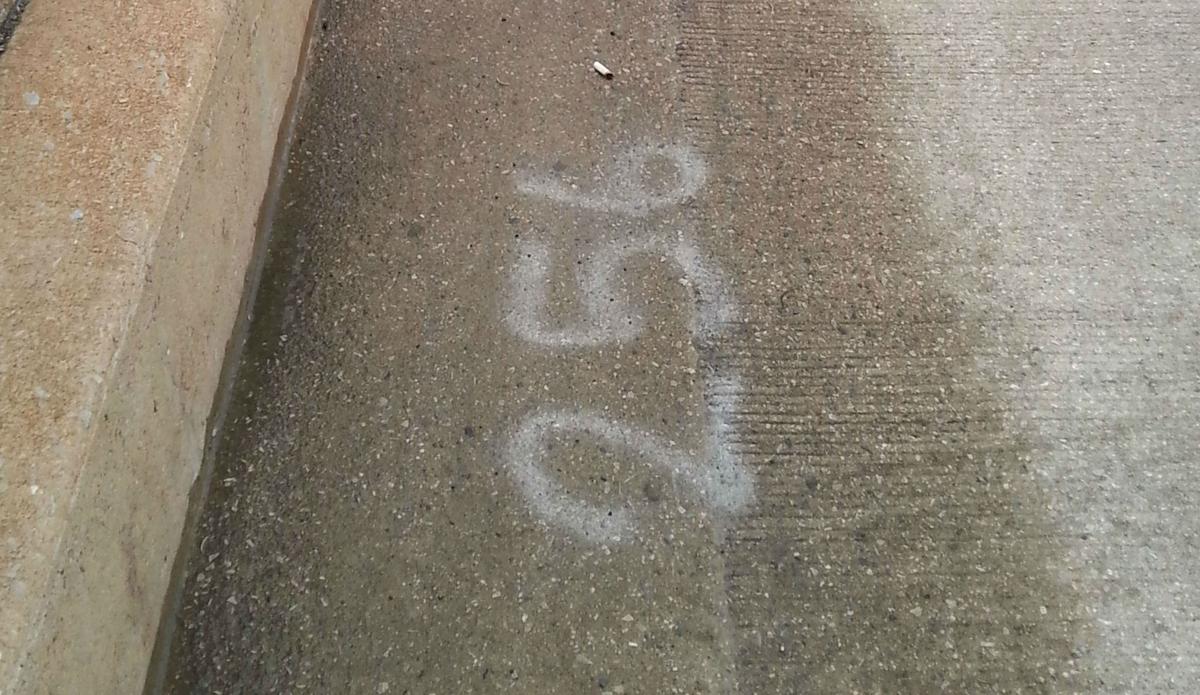 The number above is one of many spray-chalked onto the Veterans Memorial Bridge between Columbia and Wrightsville. 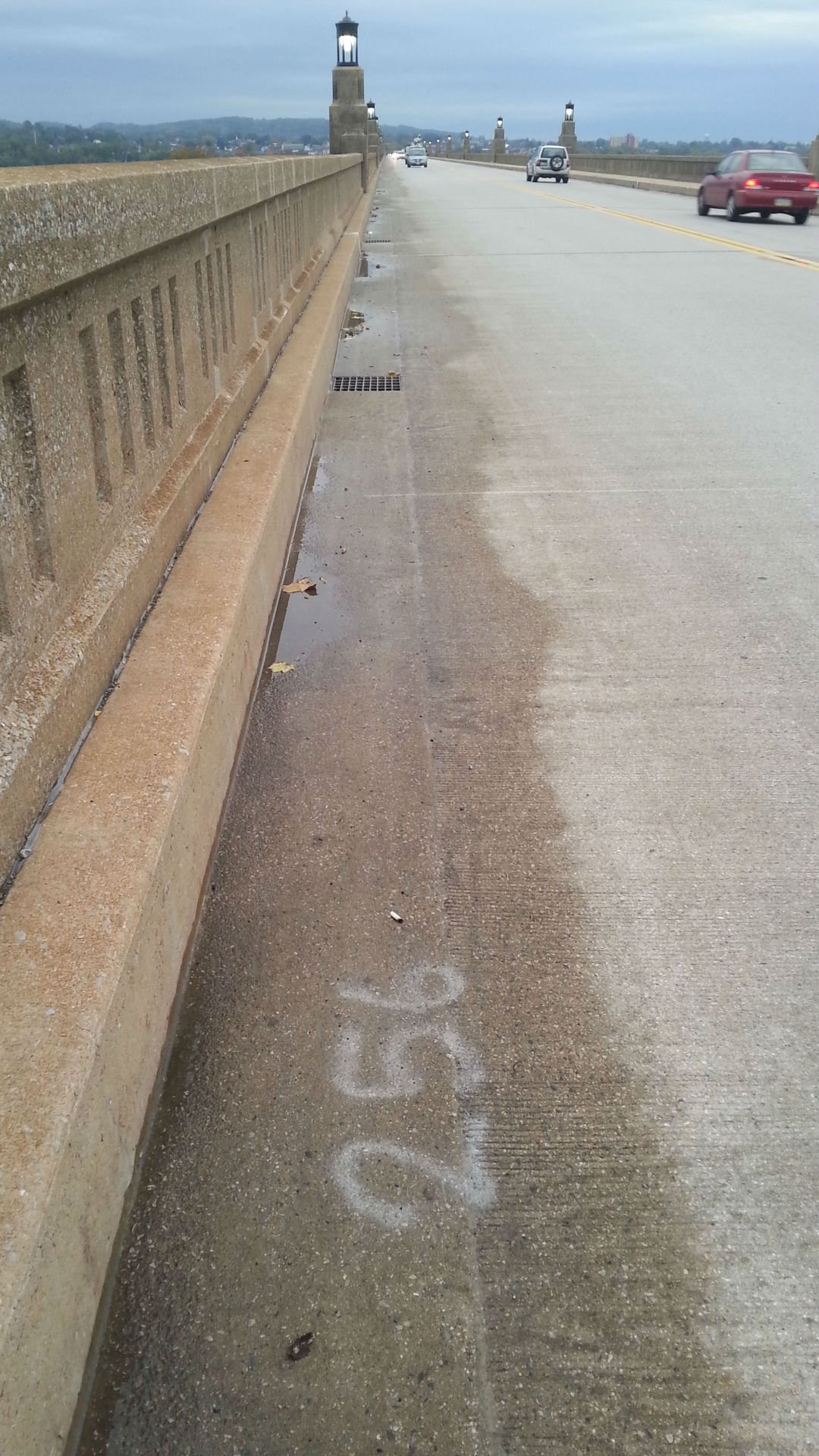 Another view of the chalk-sprayed number on the Veterans Memorial Bridge between Columbia and Wrightsville.

A contractor for the owner of this house at 620 S. Queen St. says it's essential for safety. The city says no permit was obtained to block the sidewalk.

The number above is one of many spray-chalked onto the Veterans Memorial Bridge between Columbia and Wrightsville.

Another view of the chalk-sprayed number on the Veterans Memorial Bridge between Columbia and Wrightsville.

A caller wondered about the barricades in front of a house in  southern  Lancaster city.

If you take Chesapeake Street to its western end, the house faces you at the light at South Queen Street.

The barricades in front of 620 S. Queen St. block the sidewalk entirely — and the caller wanted to know how long the city is going to permit that.

Jared Yoder, a Lancaster-based mechanical and carpentry contractor who’s doing work on the barricaded house and the one next door,  said the barricade was essential.

The owner — Larry Demarco, who could not be reached for comment — purchased the houses and asked Yoder to take a look, Yoder said. Yoder is listed as the applicant on permit applications filed with the city to work on the two houses.

The barricades were put up for safety, Yoder said.

A permit to block the sidewalk was not requested, so the scaffolding will have to come down or be replaced with a walk-through type of scaffolding, Matthew Metzler, deputy director for construction services in Lancaster’s Department of Public Works, said last week.

Gary Horning, the city’s bureau chief for code compliance and inspections, said the city has issued permits to stabilize the facade and repair the roof at 620 S. Queen St. and to do general rehabilitation on 622 S. Queen St.

That work has been slowed by the fact that the homes, both built in 1895, are in the city’s Heritage Conservation District.

The owner’s proposal to cover the brick facades of the two homes with vinyl siding met with a recommendation from the city Historical Commission that he use a brick veneer instead.

That recommendation was made at the commission’s September meeting.

Demarco, the property owner, wasn’t there for the October meeting, and his contractors weren’t authorized to make revisions to the proposal on his behalf, according to Suzanne Stallings, a historic preservation specialist with the city.

Demarco, who Yoder said missed the October meeting because a charity golf outing ran later than he expected,  plans to be at the commission’s November meeting.

The November meeting is his last chance before the Historical Commission makes its recommendation to City Council, Stallings said.

With the city’s OK, Yoder said, the structural work on 620 S. Queen should take two to three weeks and most of the rest of the work should be completed by the start of the new year.

The permits are valid until July 2, 2016, because state law requires the city to give a property owner two years, Horning said.

They’re starting to fade, but you can still see them.

To one Columbia resident — whose exercise includes walking across the Veterans Memorial Bridge from Columbia to Wrightsville and back several times a week — the white numbers and lines along the bridge’s north wall make it look like “a graffiti-covered bridge in Philly.”

The numbers and lines are from the 26th annual Bridge Bust held Oct. 4 — the Susquehanna Valley Chamber of Commerce’s annual fundraiser that closes the bridge to traffic so vendors  can set up shop and people can walk and shop with a view of the river.

In the past, vendor spots for the event were marked with removable wooden blocks and signs.

“Is PennDOT aware this was done this year?” the Columbia man wanted to know.

No permission was requested or given to mark the bridge, according to Pennsylvania Department of Transportation spokeswoman Fritzi Schreffler.

Kathy Hohenadel, executive director of the Susquehanna Valley Chamber of Commerce, said volunteers used spray chalk this year to mark vendor spots because the old way of marking vendor stands took too long and the markers could not be seen clearly.

The vendors started setting up for the event at 5 a.m., Hohenadel said. Four volunteers marked the spaces the night before.

The chalk should wear off, Schreffler said, but PennDOT will remind the chamber next year that it is not allowed to mark the bridge pavement without special permission.