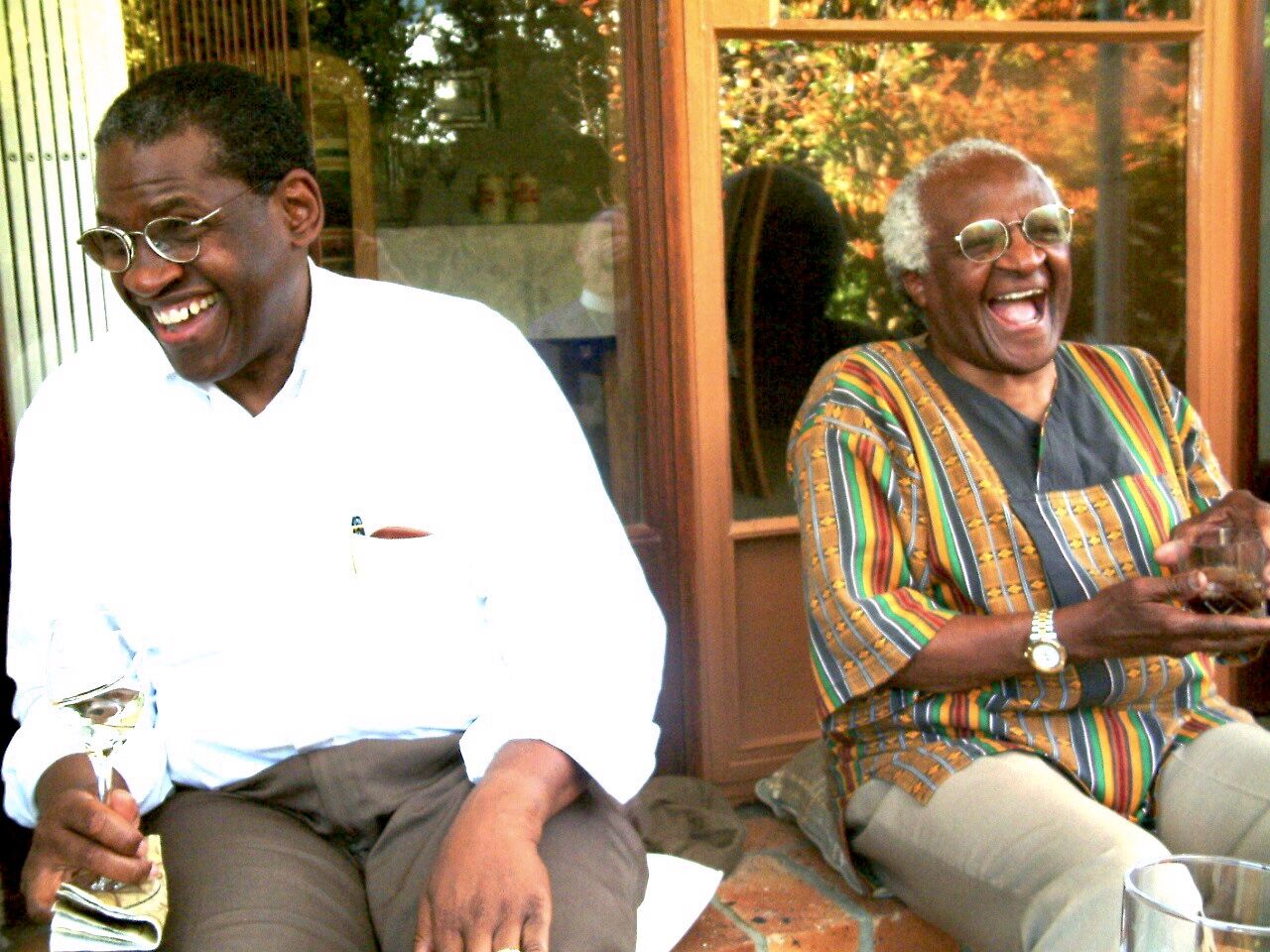 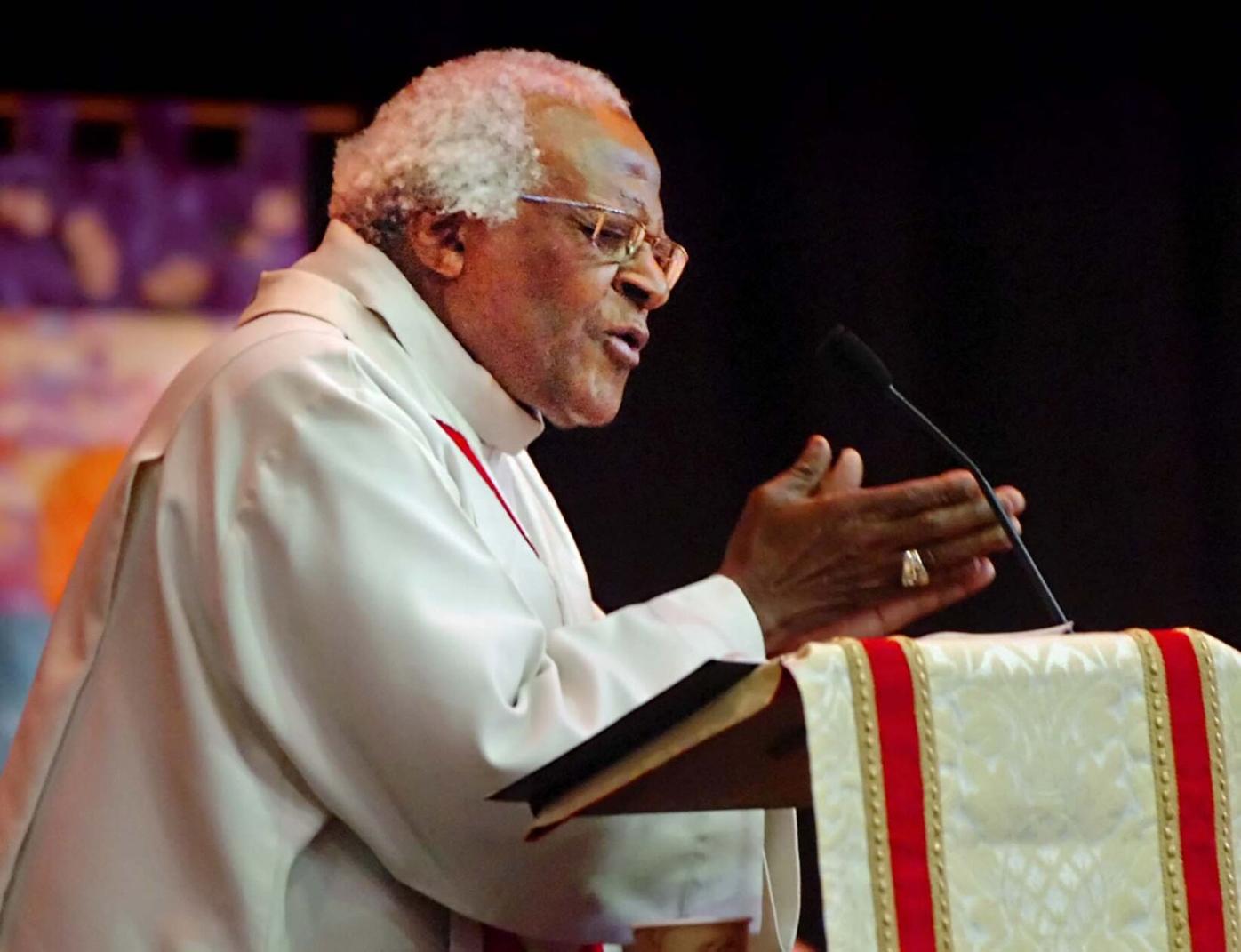 In this 2006 file photo, Archbishop Desmond M. Tutu delivers the sermon at the consecration of his friend, the Rev. Nathan D. Baxter, as bishop of the Episcopal Diocese of Central Pennsylvania. 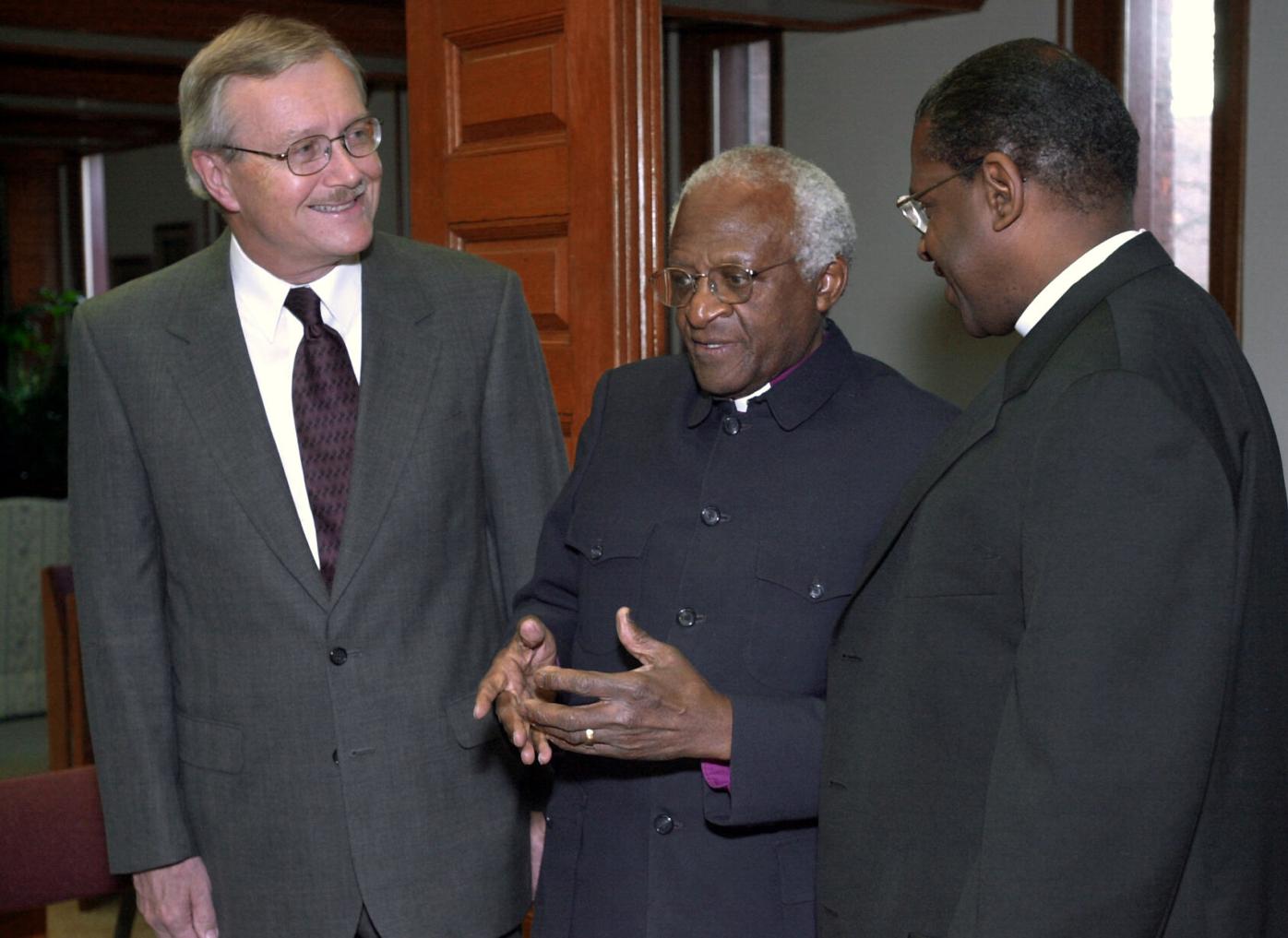 In this file photo from 2002, from left, Peter Schmiechen, then-president of Lancaster Theological Seminary, Archbishop Desmond Tutu and the Rev. Nathan Baxter, dean of the National Cathedral, visit Friday, April 5, 2002, before a reception at the seminary. 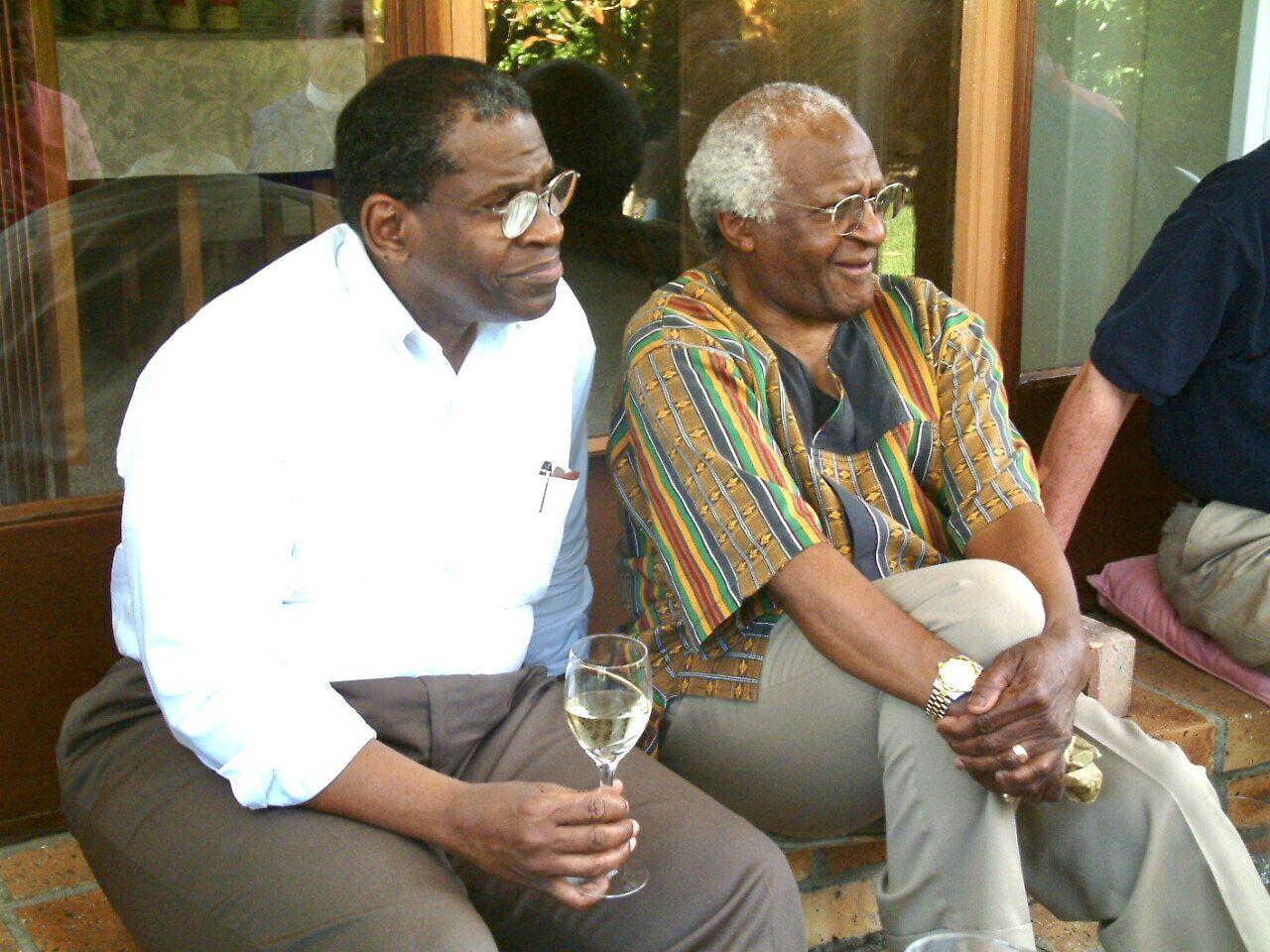 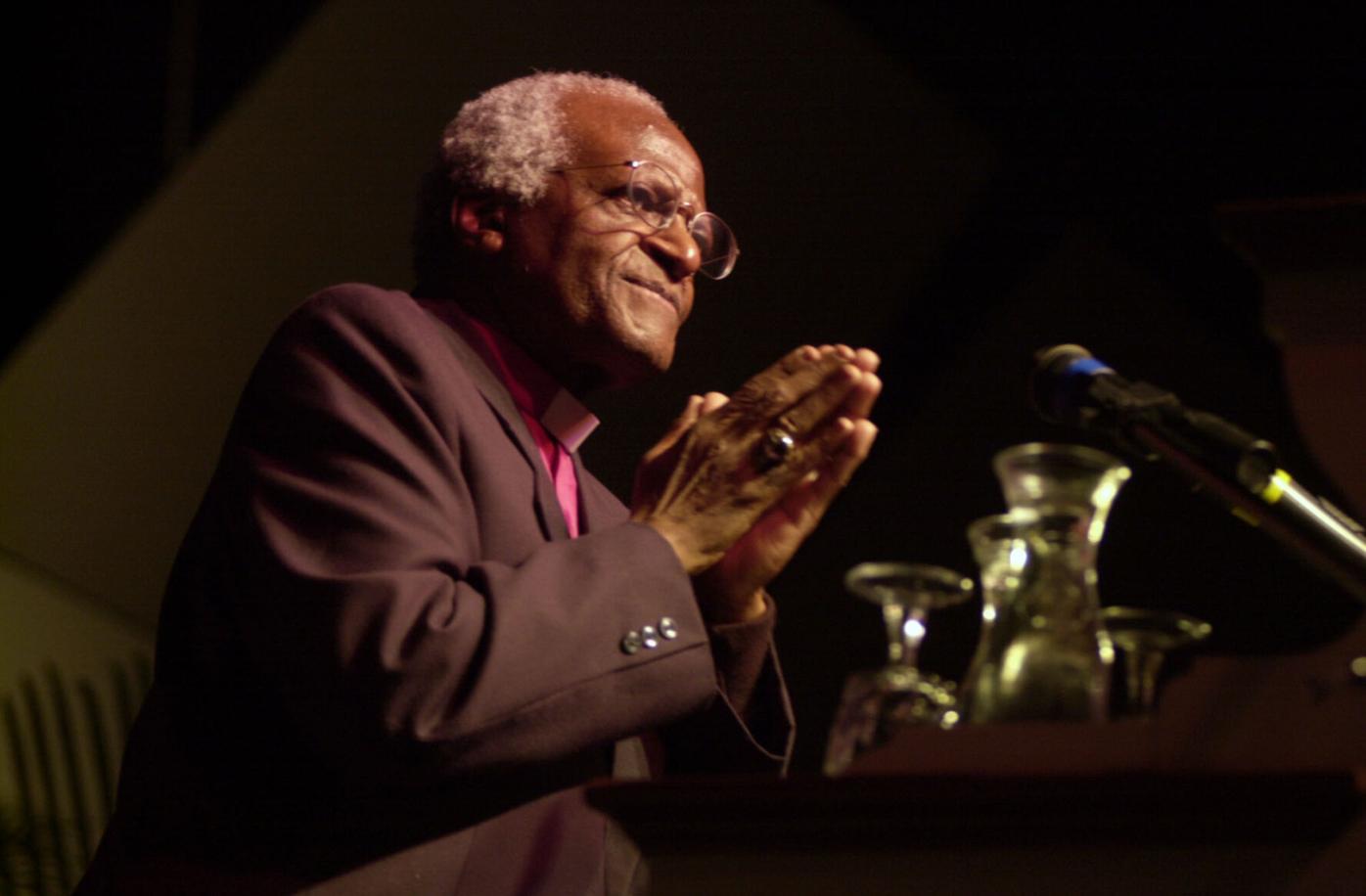 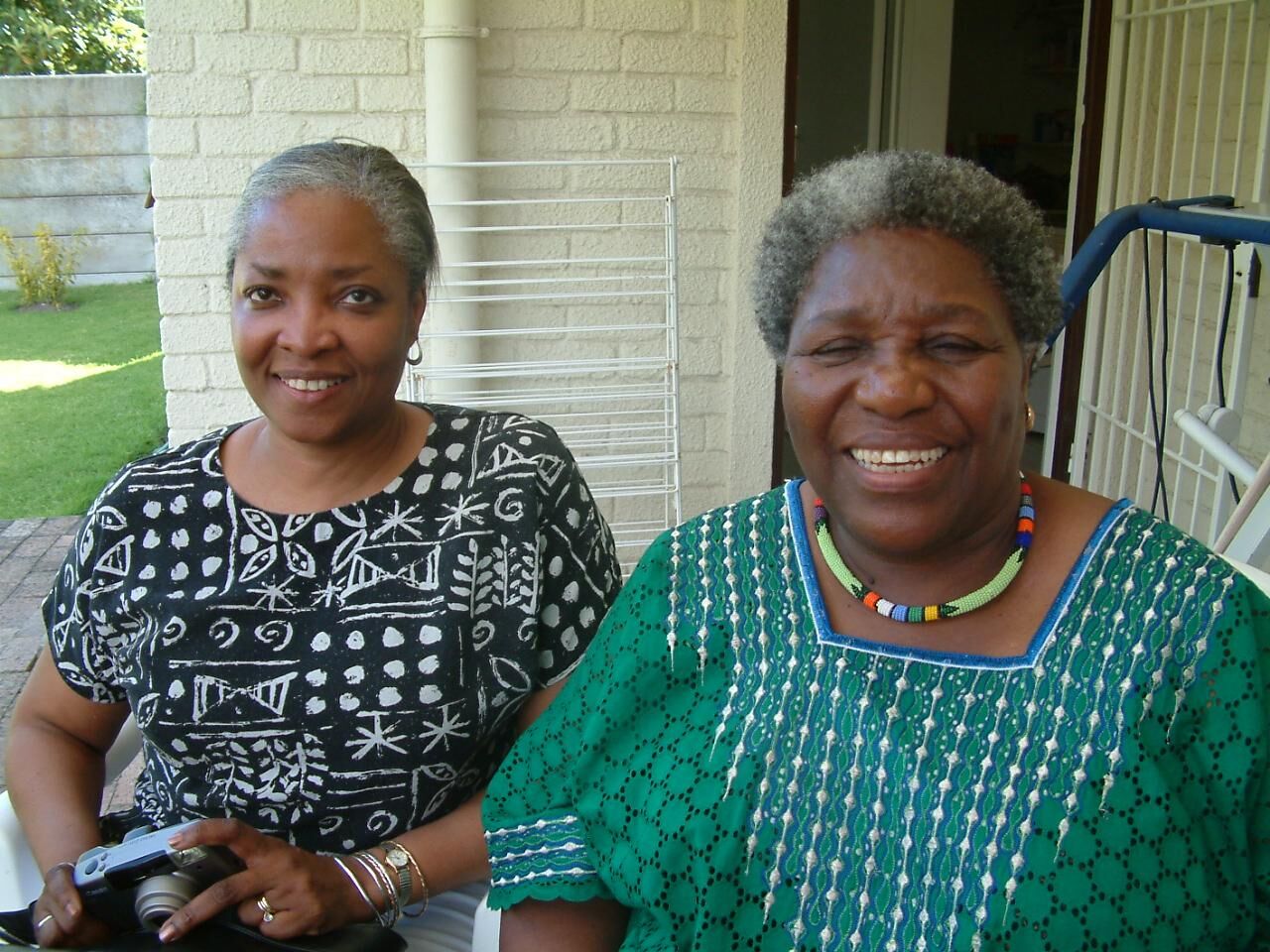 Bishop Nathan Baxter first met the late Archbishop Desmond Tutu in the mid-1980s at St. Paul’s College, in Lawrenceville, Virginia, when Baxter was a chaplain and professor of religious studies at the Episcopal college.

Tutu, who died Dec. 26 in Cape Town, South Africa, at age 90, won the Nobel Peace Prize in 1984 for his role in ending apartheid in South Africa. He later became the leading advocate for peaceful reconciliation under Black majority rule.

“It’s amazing to me that this great Christian man died so close to the birthday of his Lord,” Baxter said Monday. “It’s like Jefferson dying on the Fourth of July.”

Baxter and Tutu became close friends and stayed in touch — speaking as recently as this past fall.

Tutu preached at Baxter’s Harrisburg consecration service when he became bishop of the Episcopal Diocese of Central Pennsylvania in 2006. Previously, Baxter — now retired and living in Harrisburg, where he was born and raised — served 2 1/2 years as rector at Lancaster’s St. James Episcopal Church.

Baxter has also been teaching at Lancaster Theological Seminary, from which he graduated in the 1970s.

When Baxter first met Tutu, Bishop John T. Walker, of Washington, D.C., had invited him to the United States to speak about the anti-apartheid struggle in Africa.

“He shared with us why his approach was different from the militant approach,” Baxter said. “South Africans knew, but Americans did not. This was an effort to inform Americans about the struggle and how we could support those seeking to defeat apartheid in South Africa. ... He was a mesmerizing speaker and got our attention.”

Baxter also met with Tutu in Washington when Baxter was dean of the National Cathedral, where he served from 1991 to 2003.

“He had a great sense of humor, even in the struggle,” Baxter said. “I think it helped him not to become bitter, and that’s very important because he was witnessing to how faith can make us stronger than our pain.”

One evening, the ambassador of the South African Embassy invited Baxter and his wife, Mary Ellen, to dinner with Tutu and two wealthy white businessmen from South Africa who had been proponents of apartheid. It was the first time they had talked since apartheid had ended.

“It was very heavy,” Baxter said. “But what was beautiful was that they talked about how their children had collaborated to protest against apartheid. The white men talked about how hard it was for privileged parents to see their privileged children trying to end the system that gave them privilege.

“What was so powerful for me was listening to Tutu talking about his children being arrested with the businessmen’s children,” Baxter said. “They risked so much. The white parents didn’t want their children involved, while Tutu’s children were being arrested and beaten and living in segregation.

“I was so moved by these opponents talking about the future for their children, talking as parents to parents,” Baxter said. “It was supposed to be a social event. It turned out to be a beautiful experience of reconciliation.”

At the dinner, Tutu talked about the wisdom of children.

“Rather than putting the businessmen down, he had no bitterness,” Baxter said. “His manner was to talk about children, their courage and hope for a nonapartheid South Africa, and white businessmen’s children having the same hope and dream. His approach had a way of putting everybody at ease, a way of just healing. The conversation turned to hope.”

When Tutu preached at Baxter’s consecration, he spoke about remembering how much God loves us.

“I still hear from people who say it was the first time that they really believed they were loved by God, and I think it was because what others say to me, he just seemed to embody an overwhelming spirit of love. So many people were just so moved by that. Not just his words but his spirit.”

One time when Baxter and Tutu were talking, Baxter asked him how Black South Africans dealt with so many insults to their dignity during apartheid — not just the legal aspects of the governmental system of oppression, but the way they were portrayed.

“He said besides our protest marching and writing and preaching sermons of hope, there was our humor,” Baxter said. “He said that racism is so ridiculous that at times it’s funny.”

He gave an example. There used to be big billboards along the highways with a picture of a very dark, threatening, grizzled Black man. The caption read “Would you want your daughter to marry this man?” It was sponsored by commercial media.

“Remember, one thing then in America was the fear of interracial marriage. Commercial media was using its resources to encourage keeping apartheid as the law,” Baxter said.

When Tutu passed by the billboard, he would say, “Let us see your daughter first,” and just laugh, Baxter said.

“He had great spirit,” Baxter said of Tutu, “but I know he had a lot of pain. But he kept a heart of hope for humanity, and he had the ability to love his enemies. We will certainly miss him.”

In 2002, Baxter was invited to preach at the Episcopal cathedral in Cape Town, South Africa. During the week he was there, Tutu invited Baxter and his wife to visit his family at their home in Johannesburg.

That same year, Tutu spoke in Lancaster as the inaugural lecturer of the then-newly established Nathan Baxter Fund for African American Studies at Lancaster Theological Seminary. In addition, Tutu spoke at Elizabethtown College in 2000.

Also in 2000, the Baxters and Tutus spent Christmas together at the Baxters’ home in Washington.

“We laughed and sang. It was just a lot of fun. He was just a very human person. That’s what made him special,” Baxter added. “He could do what I can’t, but that’s what inspires me. To have respect for those who differ with us. He was an inspiration to us all.”

When are major religious holidays in 2022? Here's a list

Happy New Year! It’s a good time to make sure your calendar is complete with this year’s maj…

Many of us have Christmas memories. My wife and I always remembered a certain Christmas Eve.…

Many people in Lancaster County eat pork and sauerkraut on New Year's Day for luck. Here's why.

With food, fellowship, entertainment and the lighting of candles, members of the Lancaster community gathered at the Bright Side Opportunities…

CHI St. Joseph Children’s Health will present “An Evening with Mitch Albom,” the bestselling author of books including “Tuesdays with Morrie” …