Lucky Dog Cafe transformed part of it's parking lot into an outdoor seating area for guests when Lancaster County officially moved into the Yellow Phase on Friday, June 5, 2020. To fight the coronavirus, Gov. Tom Wolf on July 16 ordered nightclubs to be shut down, bars to be closed unless they also offer dine-in meals, and bars and restaurants to only operate at 25% capacity. 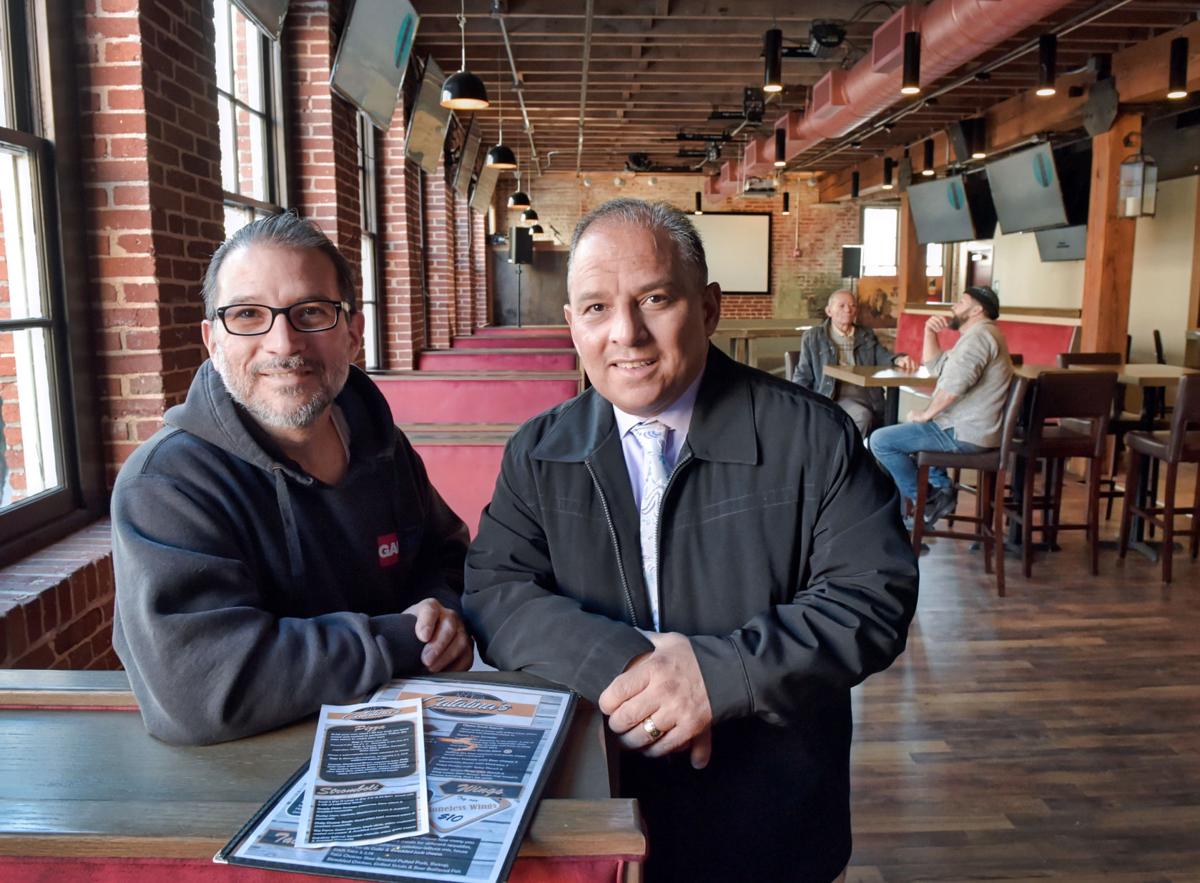 A January 2019 photo of Wayne Pagan, left, and brother Dennis Pagan inside Catalina's on Orange, their restaurant/nightclub at 40 W. Orange St.

Lucky Dog Cafe transformed part of it's parking lot into an outdoor seating area for guests when Lancaster County officially moved into the Yellow Phase on Friday, June 5, 2020. To fight the coronavirus, Gov. Tom Wolf on July 16 ordered nightclubs to be shut down, bars to be closed unless they also offer dine-in meals, and bars and restaurants to only operate at 25% capacity.

A January 2019 photo of Wayne Pagan, left, and brother Dennis Pagan inside Catalina's on Orange, their restaurant/nightclub at 40 W. Orange St.

The mood was upbeat, all things considered. Miller’s and Smokehouse had reopened their indoor seating July 1, following the county being upgraded to green status five days earlier under Gov. Tom Wolf’s program to gradually reopen the economy.

Under green, restaurants were restricted to using only 50% of their indoor seating capacity, per Wolf’s effort to fight the spread of COVID-19. But Duncan could live with that for the time being, as long as business was recovering.

What do you think of Gov. Wolf's new restrictions on bars, restaurants and larger indoor gatherings?

On Wednesday, Gov. Wolf announced that he will be imposing broad new restrictions on Pa. bars, restaurants and large indoor gatherings. Do you agree with this decision?

But the mood soon changed. A co-worker off-site texted one of the managers that Wolf had cut the allowable indoor seating of restaurants to 25% of capacity statewide, among several other measures, to curtail a resurgence of COVID-19 in some counties.

“It kind of deflated everyone quite a bit, because we thought we were starting to gain a little bit of ground,” Duncan said.

Duncan was among several local business operators dismayed by the tightening, which also closes nightclubs and limits indoor events to 25 people.

The Lancaster Chamber, in a letter to Wolf, called the new restrictions “a significant blow to any sense of momentum and accomplishment we had been feeling in Lancaster. … The one-size-fits-all approach in (Wednesday’s) announcement seems to completely ignore the unique effort that has been undertaken in Lancaster County. And, frankly, the unique results.”

Unless the governor can explain why he included Lancaster County in these new restrictions, “we ask that you remove Lancaster County from the statewide order immediately so we can get back to our work of opening up our local economy, safely and in the best interest of our residents,” the chamber says.

‘Kicked in the gut’

For Shady Maple Smorgasbord, the rule that dropped allowable capacity from 50% to 25% went into effect one week after Lancaster County’s largest restaurant reopened with new safety measures that included ones requiring single-use gloves for every visit to the buffet line.

Phil Weaver, co-president/co-CEO of Shady Maple, said since customers during the first week were around the now-mandated 25 percent limit, he doesn't expect to make many changes at the 2,000-seat restaurant

Yet Weaver said the new rules felt like “getting kicked in the gut” since it dashed his hopes of being profitable anytime soon following four months of what he describes as “catastrophic” financial losses.

“What's going to hurt is I was hoping to build up to 50%. To me, the break-even point is probably that 50 percent,” he said.

Weaver was especially galled that the far-reaching mandate took affect less than a day after it was announced.

“We're trying everything we can to do the right thing. And then all of a sudden rules change in the middle of the day, without even a day’s notice to try to figure it out — that is so wrong. It is just wrong,” he said.

The swiftness of the change also caught Wayne Pagan by surprise, leaving him with some $4,500 worth of liquor he had just bought for what he expected would be the third weekend back in business for Catalina’s on Orange.

Pagan, who owns the downtown Lancaster nightclub with his brother Dennis, said that even at 50% capacity, business had been good over the last two weeks.

But with the nightclub again shuttered Pagan is wondering how much longer he can continue to pay his bills without paying customers.

“Depending on how long this goes, this might put us out of business this time around. Honestly, it just might,” said Pagan. “This might be the one that just knocks us out.”

While the new restrictions didn’t require Chancey’s Pub in East Petersburg to close, owner Greg Bucher said they had the same effect since they made it impossible to do business at the 100-seat restaurant/bar, where he would have been limited to 25 customers at a time.

“I'm shutting my doors at midnight on Saturday for the second time in four months. How many times do they think we can survive this?” he said.

Bucher said he hopes to be able to open again but worries about having to continually bankroll Chancey’s himself. “How much money out of my retirement must I take to keep my business alive?” he said.

For Brendees Irish Pub in Lancaster, the new restrictions knock the capacity down to 21 people, which only works if customers don’t linger. Besides the financial feasibility of that, co-owner Jennifer Avery has been scratching her head about the requirement that customers must eat something, wondering if it would be enough for two people to split a burger. “Our burgers are pretty big,” she said.

Yet even as she wonders how to abide by the new rules, she’s reminded that many people weren't abiding by the old ones.

“We would have rather seen the rules enforced than new restrictions put in place,” she said.

The pandemic has had a “devastating” impact on the restaurant, hotel and entertainment industry in the county, said Duncan, a leader in the hospitality industry here.

“Our goal is to find ways to survive through this. I thought previously if we can get into July or early August, get back to 65, 75% of normal, we’d probably get through this year. But as you look at these things coming back at us, it takes the wind out of our sails,” he said.

Despite the cutback to 25% of capacity, Duncan said the two restaurants will stay open for now. Closing means throwing out thousands of dollars of food and disrupting the lives of employees; about 65% of the workforce has been brought back, though not with their pre-pandemic hours.

Ironically, the rule-tightening comes as guests at the two major restaurants — Miller’s seats up to 600, Smokehouse seats up to 560 — are responding positively to safety measures implemented there. These include social distancing, new foot traffic patterns and gloves for customers who serve themselves.

“Guests have been very complimentary about how well we're handling things, because we're doing it the right way,” said Duncan.

The chamber does not share that view of Wolf’s Wednesday afternoon order.

In its nine-paragraph letter, the chamber recaps the achievements of the county’s community-wide effort to protect public health and revive the local economy. With all that progress, the chamber wonders, why is the county part of these new restrictions?

“We ask for your rationale for the state-wide approach and, more specifically, we ask for the metrics you’ve applied to Lancaster County that has us placed under this state-wide order — an order that seriously threatens the future of our local restaurants and bars.

“We know you know that both lives and livelihoods are at stake with your decisions. And we respect the difficult challenges you face. Yet, at a time when people’s (and our community’s) future is at stake, we need more explanation, more metrics and more thoughtful and collaborative guidance from you so we can act accordingly and continue to do our part of ensure Lancaster County's future prosperity — for all its citizens,” it says.

Some construction work completed for new Wawa coming to Morgantown

How should schools look when they reopen? Pa. Department of Education, Health roll out detailed guidelines

Assigned bus seats, mask breaks and no school lunch lines are all part of the joint guidelines for school reopening announced Thursday by the …

Best Celebrations and More, a party store that specializes in balloon arrangements, has opened in Lancaster.

Note: This story will be updated as LNP | LancasterOnline receives additional information.

Developers are proposing to convert the one-time St. Joseph Hospital into offices, shops and housing as part of a wider $90-million redevelopm…

Two years after it closed, plans are in the works to revive the former Carlos & Charlies in East Hempfield Township as a new restaurant.

There were several shakeups to the retail industry in Lancaster County during the month of July.

Note: This story ran in print in LNP July 16, having gone to press before Gov. Tom Wolf imposed additional restrictions on restaurants and ind…