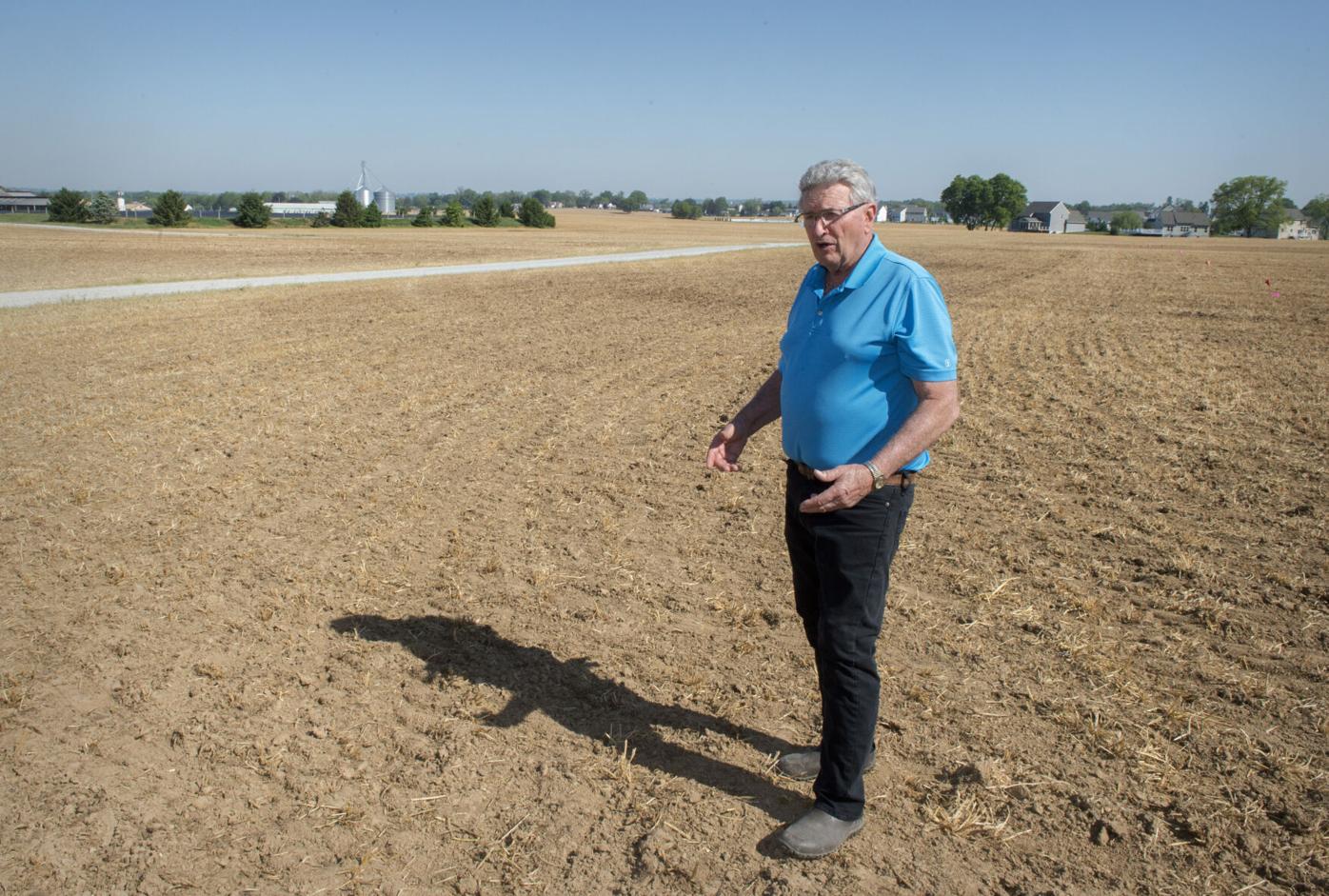 Luke Brubaker, of Brubaker Farms LLC talks about how fertilizer from the digester is incorporated into the soil on fields at his East Donegal Township farm Tuesday, May 19, 2021. 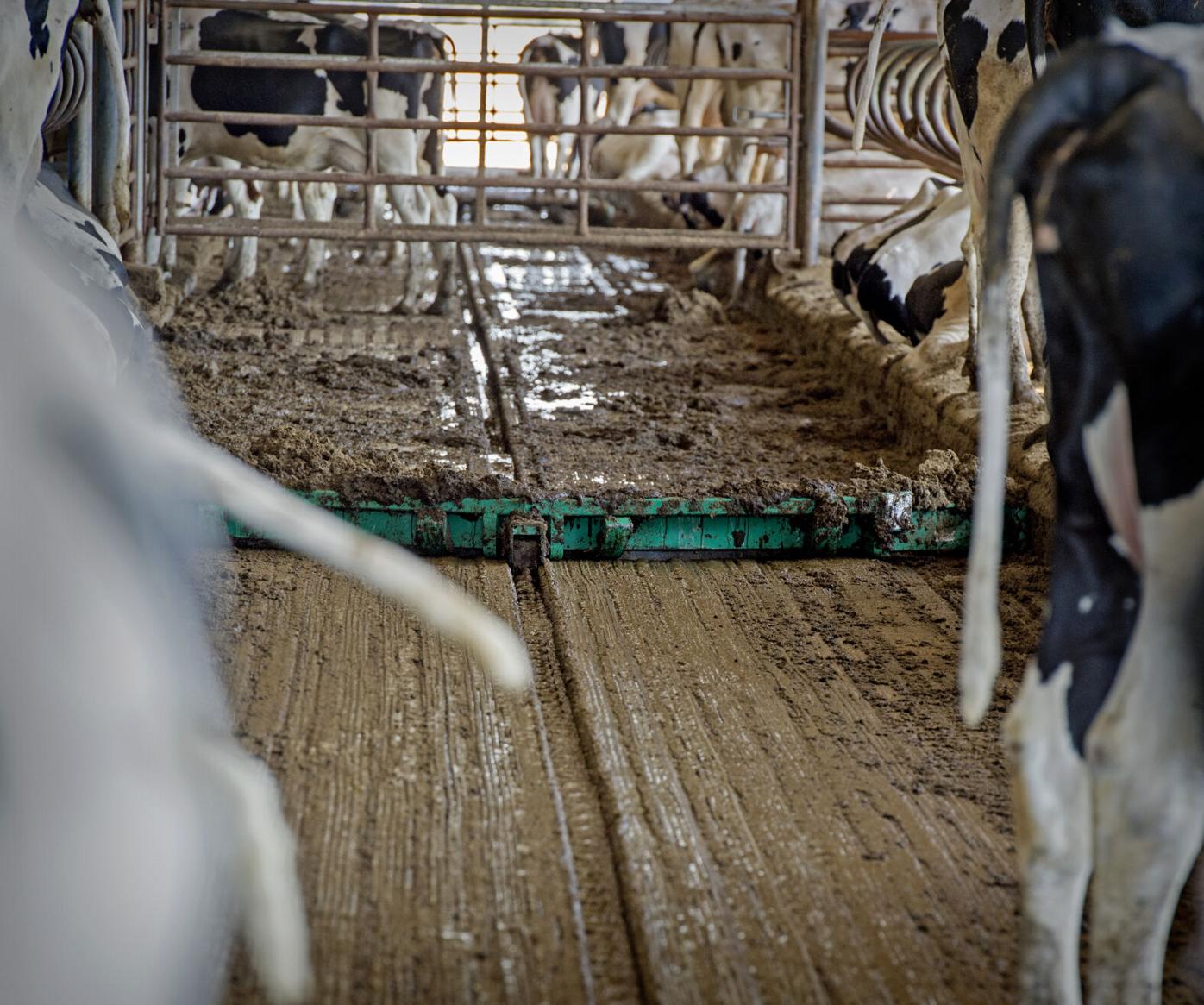 Waste from cows on the floor of a barn is moved by a scraper toward the digester at Brubaker Farms LLC in Donegal Township Tuesday, May 19, 2021. 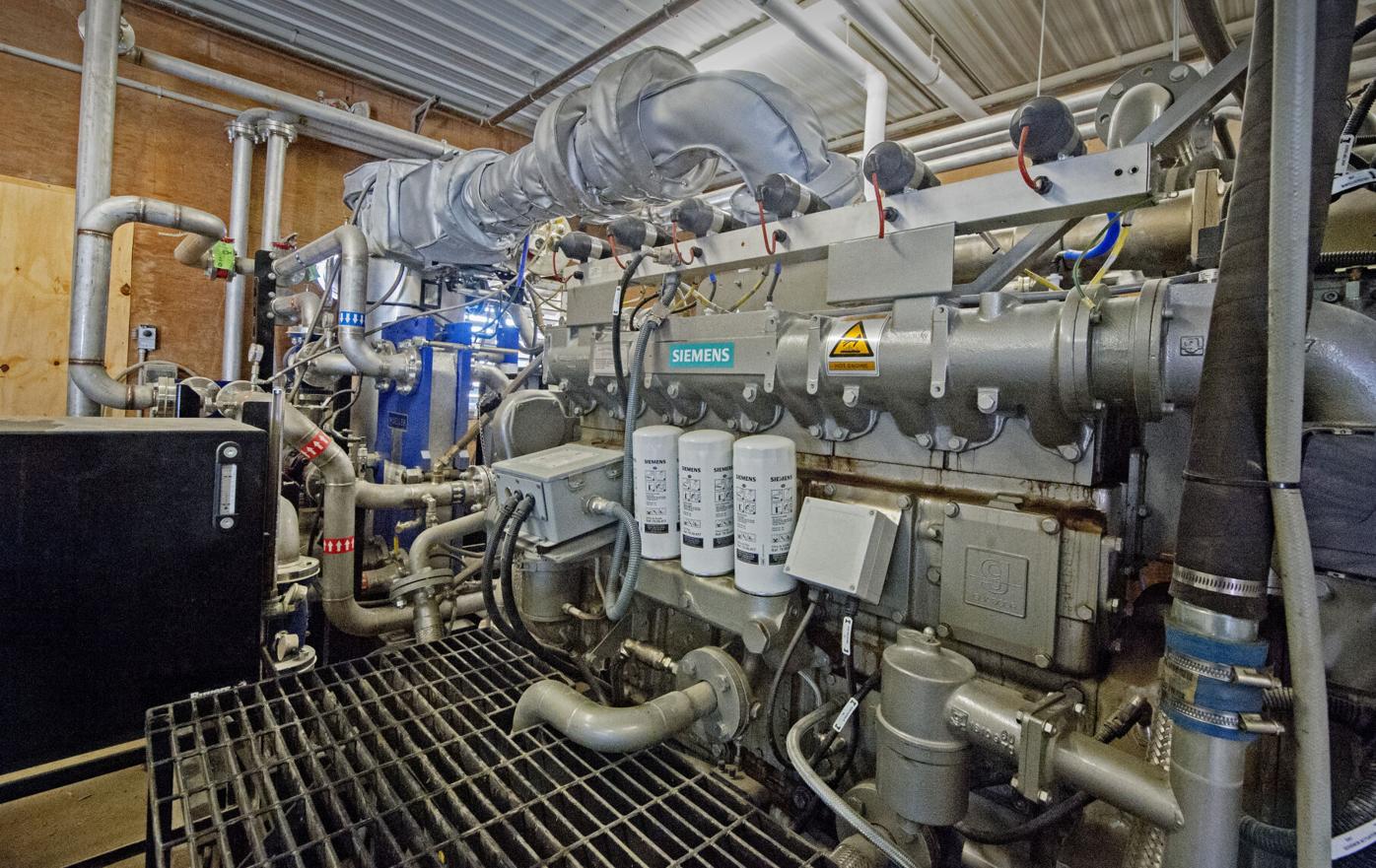 The engine which is fueled by methane from the digester, right, drives a generator to produce electricity at Brubaker Farms LLC in East Donegal Township Tuesday, May 19, 2021. 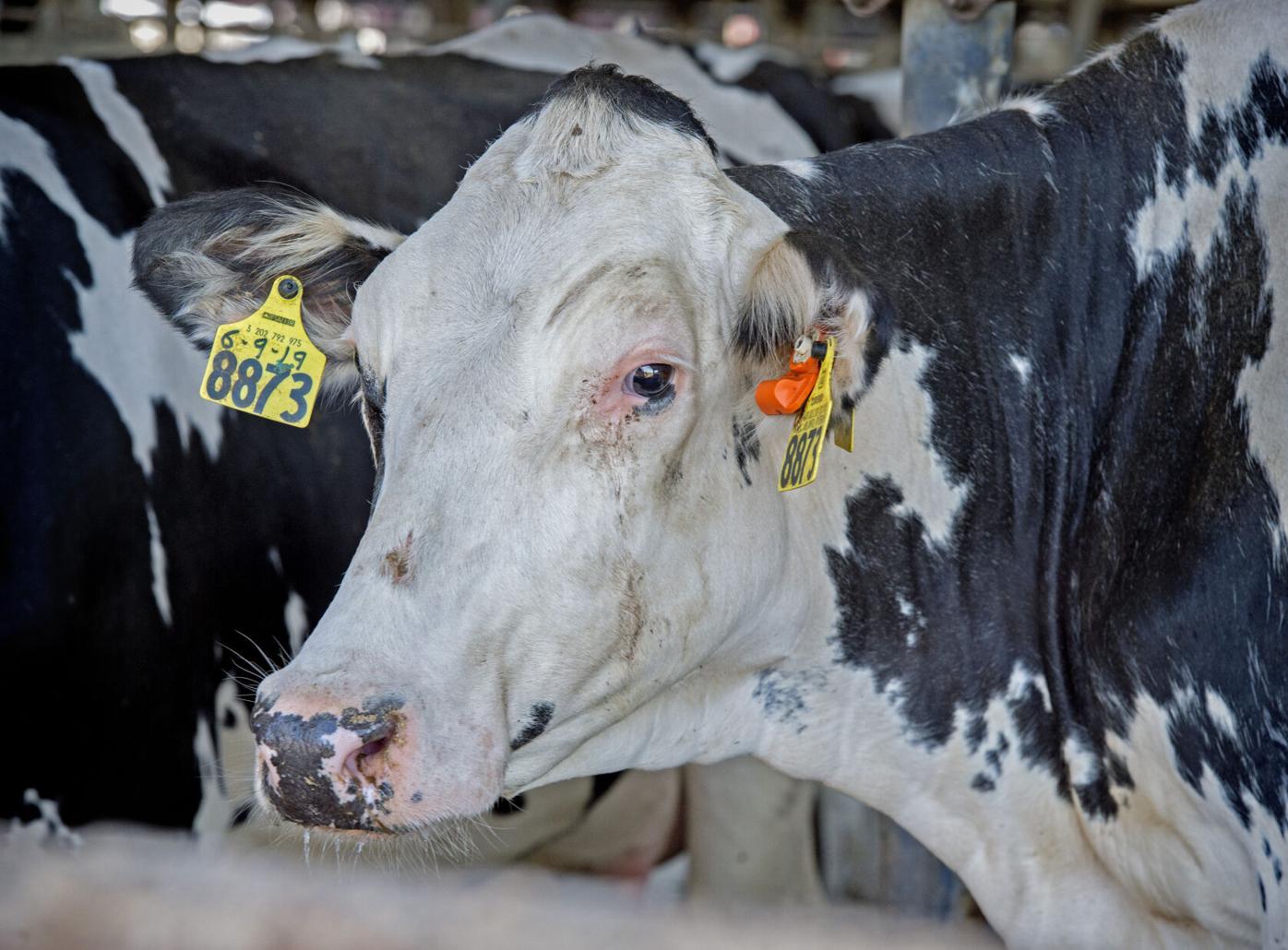 A cow stands in a barn at Brubaker Farms LLC in East Donegal Township Tuesday, May 19, 2021.

Luke Brubaker admitted that he’s proud of his soil as he bent over and gestured with an extended arm to a field on his northwestern Lancaster County dairy operation.

He pointed to the largely unbroken soil, where modern farming practices allow feed to be planted without tilling. And he noted tiny slits in the dirt, where fertilizer was injected directly into the ground instead of slathered on top.

“See, it’s not all torn up,” he said, highlighting the effect of farming practices that lock soil and nutrients in the ground, keeping them from washing or blowing away where they can become harmful pollutants.

Those methods were among numerous conservation practices Brubaker made sure to highlight as he offered something of a rebuttal to recently published research that links farming-related air pollution to premature deaths.

That study estimated that air pollution from Lancaster County farmlands causes about 184 deaths annually, according to Jason Hill, a University of Minnesota professor. That’s about 0.075 deaths for every one of Lancaster County’s 2,440 square kilometers of land. Some of those deaths, he noted, may be recorded out of the county — a result of local pollutants carried elsewhere by weather.

Those local figures were plucked from a study published last month in the Proceedings of the National Academy of Sciences by Hill and more than a dozen fellow researchers, who set out to examine the relationship between food production and air pollution.

Nationwide, they found that agriculture-related air pollution is responsible for 17,900 yearly deaths.

It’s a statistic that’s attracted attention in Pennsylvania and, specifically Lancaster County — the most productive, non-irrigated farming county in the United States, home to more than 5,000 individual farms.

“It’s something that’s being talked about, absolutely,” said Liam Migdail, spokesman for the Pennsylvania Farm Bureau.

However, industry leaders wish more of that discussion would focus on the growing adoption of farming practices that can help capture air pollutants, Migdail said.

“These are all practices that are in place in farms in Lancaster County and they are expanding,” Migdail said, holding up Brubaker Farms LLC as an example. “The last thing that any farmer wants to do is damage their community or cause a health problem.”

Agriculture has long been identified as a contributor to air pollution. But Hill said the study he collaborated on is novel because it used modern air-quality models and county-level data from federal regulators to examine the impact of individual types of farming — concluding that animal agriculture is a leading cause of air pollution.

Mainly, the study focused on particulate pollution — microscopic solids and liquids floating in air that can be created through on-farm activities like tilling, field burning and machinery use, as well as by livestock kicking up dust.

Particles also can be created during chemical reactions in the air, including when ammonia reacts with other airborne substances to form salts, according to Richard Clark, chair of the Earth Sciences Department at Millersville University, where he teaches meteorology.

Ammonia is emitted into the air from animal waste, as well as when it is spread atop fields as fertilizer, said Clark, who was not a part of the study.

Within the published study, Lancaster County stands out in the United States, both for its high levels of ammonia emissions and total farming-related particulate pollution, Hill said, comparing it to neighboring regions.

“It’s understandable because we are spraying a lot of manure on fields and with that comes ammonia,” he said.

The type of particulate pollution of concern in the study is called PM2.5. The name means individual particles are no larger than 2.5 micrometers -- 30 times smaller than the width of a human hair.

Because they are so small, the particles are a threat to human health, according to Alan Peterson, a medical doctor in Lancaster County who has long studied the relationship between health and the environment.

The tiny particles are easily inhaled, bypassing bodily defense systems to enter the lungs, where they can then make their way into blood vessels, he said.

“Once they are there they can get into literally any organ in the body,” Peterson said.

In the body, the particles act as irritants with the potential to severely impact health, including worsening of symptoms for those with pre-existing respiratory illnesses like asthma, he said. They can also increase the likelihood of heart attacks and strokes.

Particulates are a threat that’s often been highlighted by officials at the American American Lung Association, who’ve regularly drawn attention to the Lancaster area’s history of poor air quality in the group’s annual State of the Air reports.

“The advantage of a study like this one is it brings the issue out into the public arena,” Stewart said, referring to particulate pollution, which is invisible to the human eye.

“People think air pollution comes out of tailpipes and smokestacks. If you see some visible cloud of smoke, that’s air pollution,” he said, adding particulate pollution is “not something that’s on the tip of the average person’s tongue.”

That doesn’t mean that farmers and other stakeholders are unaware of the problem, according to Migdail with the farm bureau. Often, they are taking steps toward reducing their environmental footprints, he said.

In fact, Migdail said, many have already implemented some of the same pollution control measures suggested by Hill and his colleagues in their published study — soil conservation, manure management and taking steps to reduce livestock waste.

“These are practices that, here in Pennsylvania, have been adopted for decades,” Migdail said.

And they’re practices Brubaker was excited to show off last month on his East Donegal Township property, which is part of a dairy operation large enough to produce two tractor trailer loads of milk a day.

There, he pointed out his no-till feed fields planted with cover crops to anchor soil.

That was before leading the way to one of his cow barns, where he explained how waste is managed, regularly cleaned from its floor and fed into a mechanism called digester, where it’s processed.

Out of that process comes a nutrient-rich fertilizer that is incorporated into the soil — not sprayed on top — to help reduce emissions, Brubaker said.

A system of hoses and underground pipelines even helps to move that fertilizer and waste throughout the Brubaker Farms footprint, helping him scale back vehicle use, he said.

That’s not to mention that the digester converts manure-related emissions of the greenhouse gas methane to electricity — enough to power 300 homes.

Brubaker conceded that implementation was sometimes costly, but he did not shy away from the fact that he and his sons, who now own and manage the farm, have been able to lean on public grant funding.

According to Brubaker, he knows many local farmers are willing to do the same, implementing conservation measures where they make sense.

“Driving around, you can see some bad,” Brubaker said, “but if you think that’s how everything is, it’s not.”

In his mind, the only way to increase farmers’ adoption of conservation is through education.

Meanwhile, Hill and his fellow researchers hope their study could lead to heightened scrutiny, possibly attracting the attention of regulators and decision-makers.

“We don’t do research just for the sake of doing research. We do this research because we want to understand problems,” he said. “I’m glad that conversation is happening.”

Officials at the state Department of Agriculture saw it, according to spokeswoman Shannon Powers.

Like the others, she too focused on progress that’s already been made, drawing attention to millions of dollars invested in on-farm conservation methods through the state Farm Bill and other programs.

“This does not even touch on research funding and a myriad of ways in which Pennsylvania continues to improve how food is produced to minimize environmental impact, while conserving our precious soil, water and air resources for the future, and ensuring that we can feed a growing population,” Powers said.

That’s in addition to maintaining strict regulations, which target both nutrient management and odor control on farms, she said.

“Measures to improve soil and water quality and minimize sediment and odors . . . often overlap with those that improve emissions from farming,” Powers said. “In other words, the conservation practices that keep sediment and nutrients out of the water also keep them out of the air and in the soil where they are beneficial.”

Lancaster region's air quality again ranks among worst in the US: report

Air quality in the Lancaster region is once again ranked among the worst in the nation, with…

Since last summer, a police department in northern Lancaster County has saved about $15,000 …

Tiny pieces of plastic are polluting some of Lancaster County’s most well-known waterways, w…

For 40 years, Lancaster County has been a trailblazer in farmland preservation, but a new report from the Lancaster Farmland Trust released We…

Watch: Panel discusses the importance of farmland preservation and the threat of suburban development [video]

A Lancaster County farmer accused of repeatedly shirking food safety laws was found in contempt of court this week, when a federal judge ruled…

Strong thunderstorms are possible in Lancaster County this weekend, according to the National Weather Service in State College.