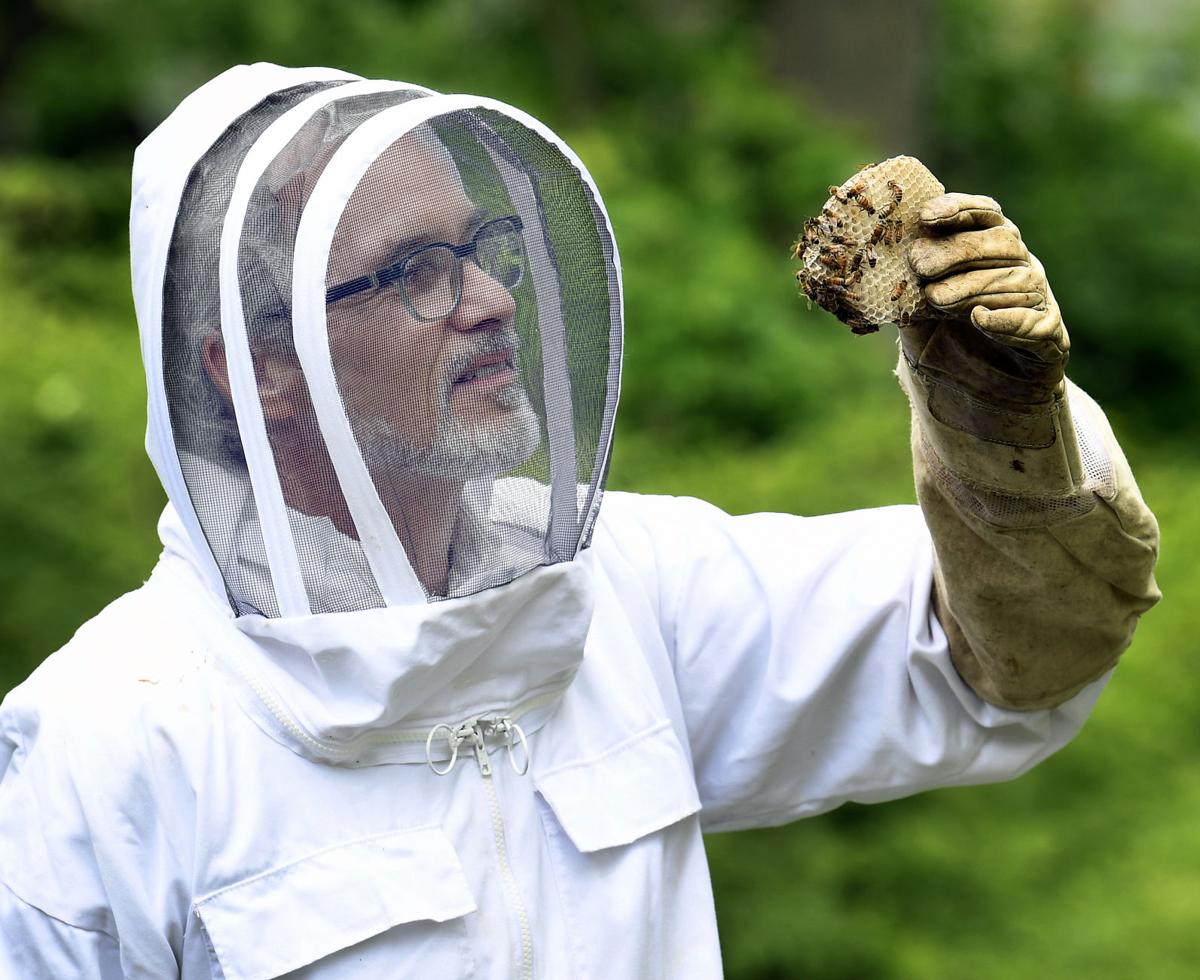 Brian Tate inspects some honeycomb, with a few bees aboard, at his home in Lancaster Township on Thursday May 14, 2020. 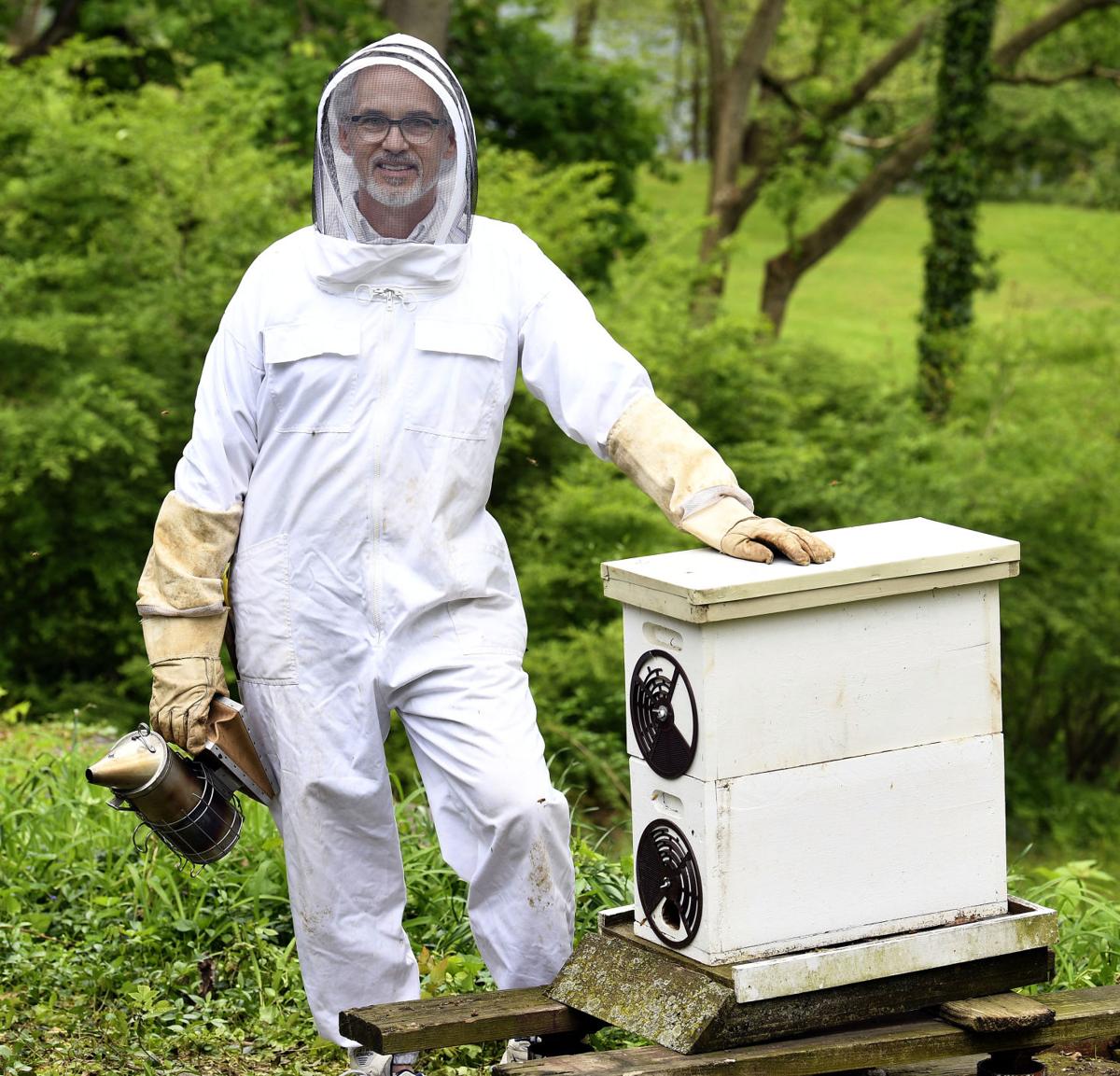 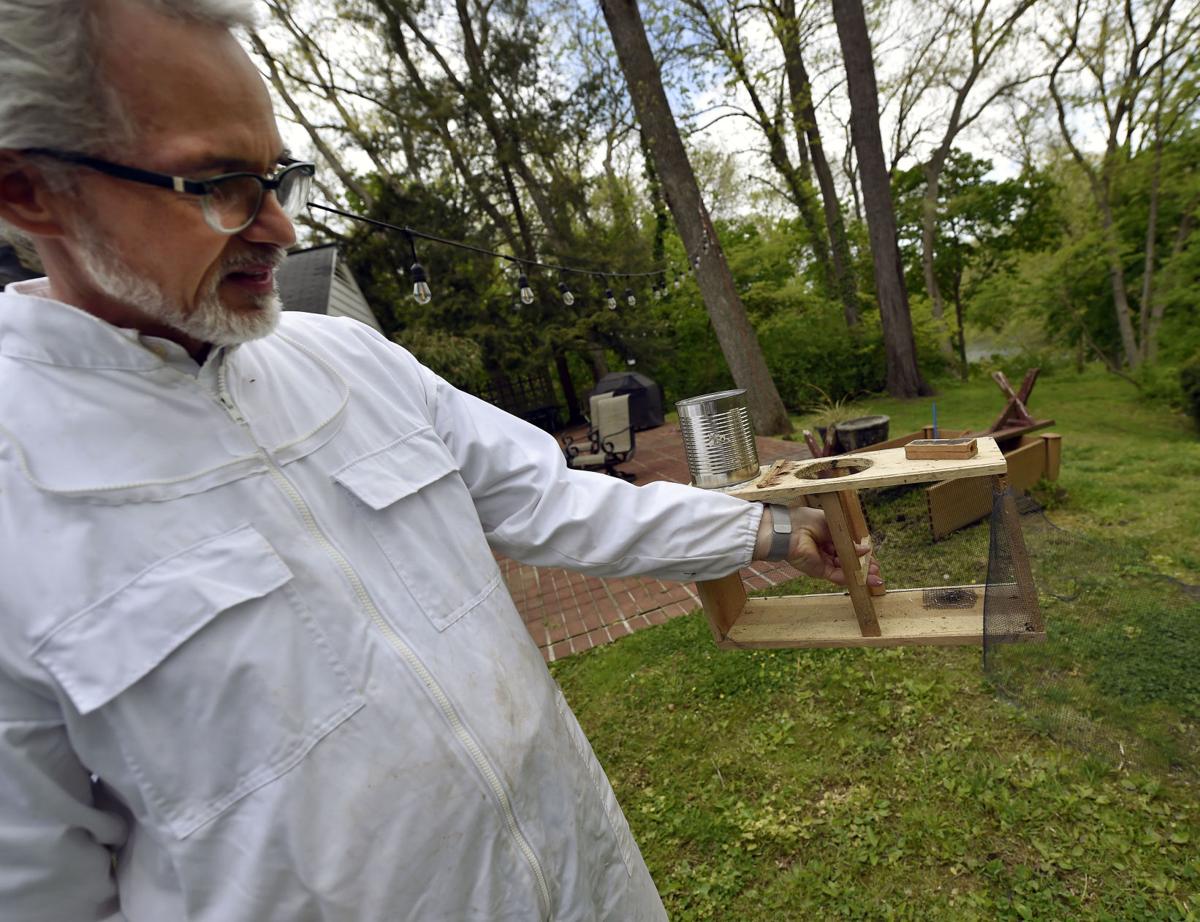 Brian Tate, shows off the shipping container that the bees escaped from at the post office, at his home in Lancaster Twp. Thursday May 14, 2020.

Brian Tate inspects some honeycomb, with a few bees aboard, at his home in Lancaster Township on Thursday May 14, 2020.

Imagine what thoughts might run through your mind if you were driving along and an SUV pulled up beside you with a driver dressed in what looks like hazmat gear. Bees are swarming around inside the car as a viral pandemic swirls outside.

Brian Tate was the driver in what actually was a beekeeper’s protective clothing. The trip from the post office on Harrisburg Pike to his home in Conestoga Woods was relatively short. But other drivers stared.

So why was this 60-year-old stock broker with a veil and helmet on his head driving a car full of bees across town? Here’s a little background.

Tate grew up on Long Island, New York. He sang in an all-boys’ choir. After practice, he recalls, it was “always time to get in trouble.” A beehive stood behind the church rectory. The boys annoyed the bees. A priest put an end to that and then educated the boys.

“He gave us the nickel tour of the beehive, and that’s what hooked me and my younger brother,” Tate says.

“My childhood memories include the soft hum of bees flying from clover to clover,” Tate says. “And that’s something you never hear anymore. If you see a bee buzzing about your flower box, it probably belongs to a beekeeper.”

That’s because parasites called bee mites and various pathogens have been killing off the honeybee population. Tate has tried raising bees since moving to Lancaster in 2000, with limited success.

In late April, his brother, who still lives on Long Island, ordered three beehives from a company in Georgia, including one for Tate. The company mistakenly sent all three boxes to Tate, so he relabeled two and mailed them to his brother.

One of the boxes broke open inside the local post office, causing some consternation.

Fortunately, a postal employee moved the queen bee, nestled in her own tiny box, outside the building. Thousands of bees joined the queen outdoors. Then postal officials called Tate.

Tate took his unopened box of bees, relabeled it to send to his brother, donned his protective clothing and went to the post office to collect the loose bees that would now be his.

Stock brokering during a national crisis has been “interesting,” Tate says, but collecting wild bees was “a once-in-a-lifetime thing.”

As soon as he moved the queen into his vehicle, the other bees followed. They were busy bees, buzzing around as he drove.

“I got a lot of looks from other drivers,” Tate says. “Here we are with coronavirus, and I’m wearing what looks like a hazmat suit. Several pranks — humorous, but unfortunately out of step with current events — flashed through my mind.”

Tate transferred the bees to a small hive in his backyard. The queen will lay eggs throughout the summer, and the older bees will “work themselves to death” in their seasonal pollen-gathering frenzy. Then bee mites will attack the new bees next winter, and that will be the end of the project.

But maybe not. Tate’s brother has read about a new regimen that might kill the mites before they kill the bees. The brothers look forward to trying it.

— Jack Brubaker, retired from the LNP staff, writes “The Scribbler” column every Wednesday. He welcomes comments and contributions at scribblerlnp@gmail.com.

Do hollowed-out logs carry water or sewage through the city? [The Scribbler]

Who was that unmasked man?

Bald cypress trees, from Louisiana to Lancaster to Louisiana [the Scribbler]

Three bald cypress trees, each more than 120 years old, stand on an 18th century farm in Willow Street — many miles from where their seedlings…