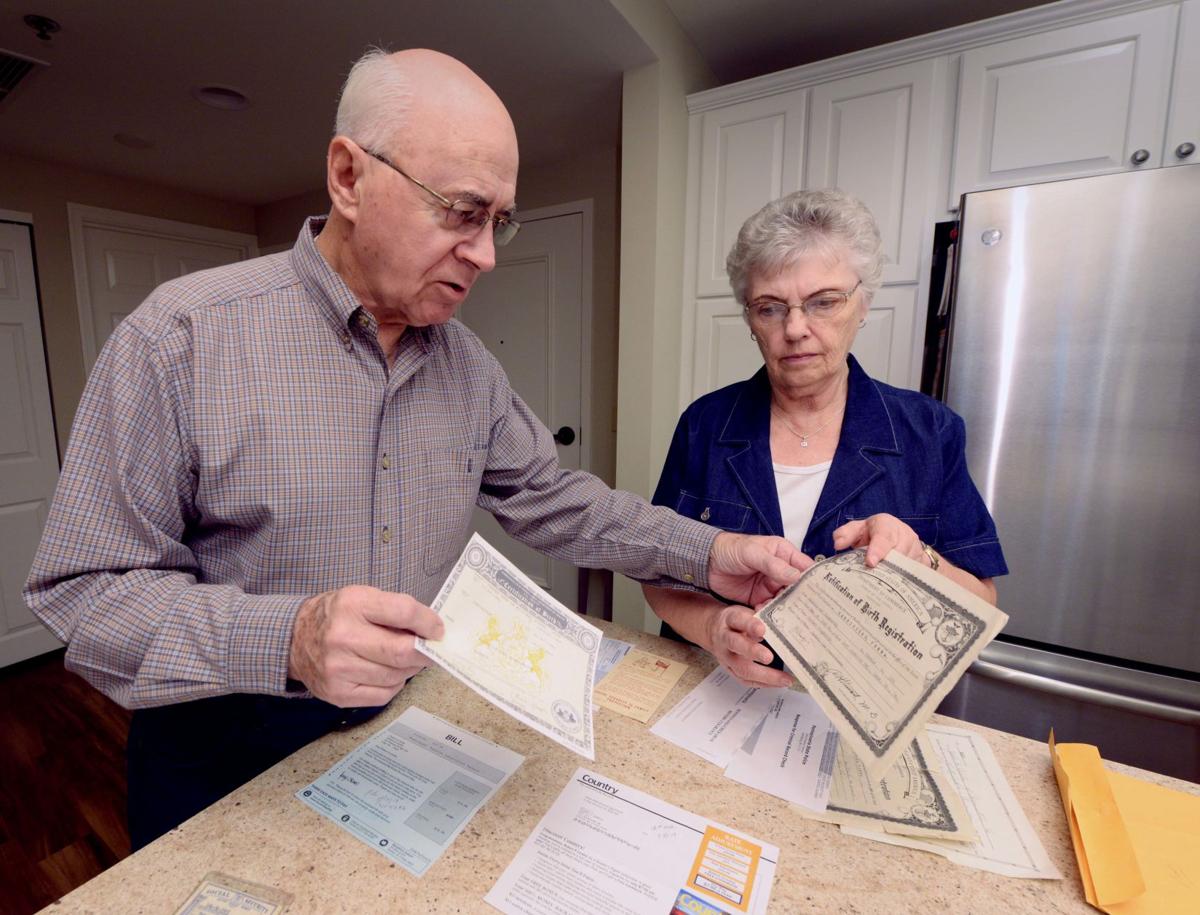 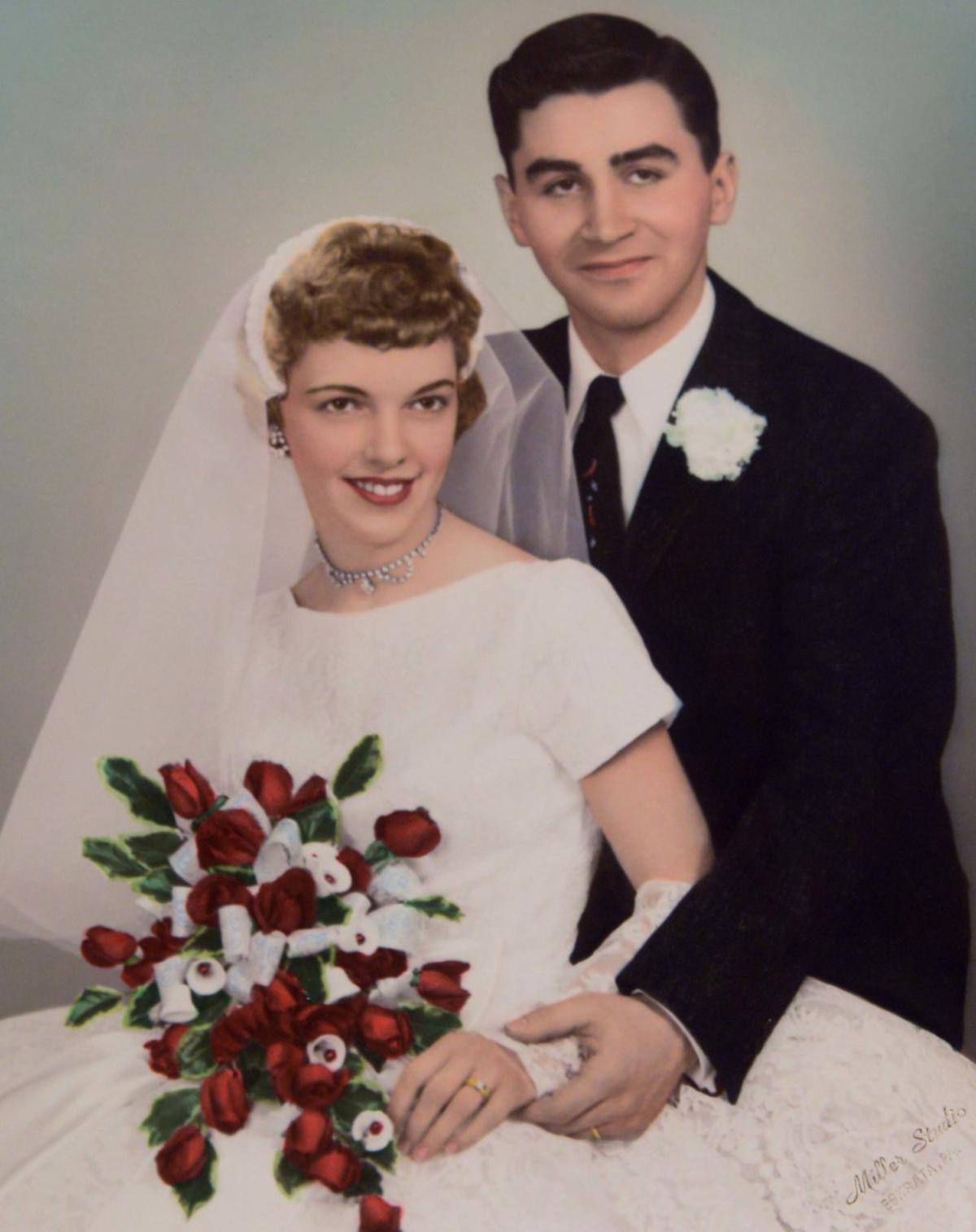 This portrait of Robert and Patricia Landis was taken on their wedding day December 26, 1959.

Patricia Landis, 77, of Brethren Village, wanted to update her driver’s license to a Real ID.

She and her husband, Robert, 82, took everything they could think of, “just in case,” to the Department of Motor Vehicles in East Lampeter Township —PA driver’s license, Social Security cards, Medicare card, birth certificates, voter registration, PA child abuse history clearances, four paid bills, baptism certificates, state police clearances and residence receipts. They took at least 10 separate documents each to prove their residency and existence (the requirements call for a birth certificate or passport, Social Security card and two proofs of state residency).

The Real ID Act establishes a minimum security standard for states to follow when issuing driver's licenses and identification cards needed to board domestic commercial flights and to access secure federal buildings. The deadline for federal enforcement is Oct. 1, 2020.

Robert Landis was able to get his Real ID without a problem. But they were missing one important document for Patricia Landis to get hers: an official marriage certificate.

For a Real ID, proof of all legal name changes is necessary — a certified marriage certificate, court order or divorce decree issued by the county’s family court are documents accepted to show those changes.

The Landises have been married for 60 years. Patricia Landis said she had the certificate given to them by their pastor after their wedding. But without a certified marriage certificate, she could not show how and when her name had changed from what is on her birth certificate to what is on her current identification.

Her husband suggested they forget about the card for a week and try again later.

“No way. We’re going back,” she said, adding she wanted the process over as quickly as possible.

“It’s another thing in life that people have to do and it’s just harder for older people,” she said.

The hassle of going from their home to the licensing center, then to the courthouse and back to finally get her identification was exhausting, the couple said.

“If we were younger, we might have gone through it easily,” said Patricia Landis.

With less than 10 months before the October deadline for federal agents to begin enforcing the Real ID Act, the number of Pennsylvania residents applying for Real IDs is rising.

About 750,000 people have gone through the process of getting a Real ID-compliant driver’s license or identification card, said PennDOT Deputy Secretary Kurt Myers. As of Feb. 6, that’s up 459,000 since August, when the tally was at 291,000 people.

On average, about 5,000 Pennsylvanians apply for or get a Real ID compliant document every day, Myers said.

Myers has a live feed of the number of Real IDs administered throughout the state displayed on his computer — by 10:47 a.m. on Thursday, Feb. 6, 34 Real IDs were issued at the East Lampeter Township location alone, he said. A larger location in Allegheny County had issued 74 Real IDs that morning.

Real ID will be enforced in one year: What is it and do you need one?

The most recent numbers are consistent with the department’s projections. Myers said 1.3 million people, or about 25% of the state’s driver’s license holders, are expected to apply for a Real ID by October. That’s another 550,000 people.

One Pennsylvanian lawmaker wants to make the process of getting a Real ID compliant document more affordable for the state’s women.

State Rep. Joe Webster (D- Montgomery County) introduced a bill this week that would set a uniform fee throughout the state for marriage license copies and would waive the fee for individuals getting copies to apply for a Real ID.

“It’s a cultural artifact, that women change their names and men don’t,” he said. “I think it’s the right thing to do.”

The issue was brought to his attention by his female constituents who shared their stories, he said.

“It’s a good sense of relief and an indicator that your government is trying to treat you in a gender equitable fashion and not make distinctions that cost more for women than men,” Webster said.

PennDOT is aware of how cumbersome the requirements can be for some people, Myers said. However, because all of the regulations are set by the federal government for all states, they cannot be waived by any single state.

In November, the U.S. Department of Homeland Security announced a request for comments from agencies and the public to offer suggestions on how to make the process of getting a Real ID streamlined.

PennDOT had two suggestions: to allow people with a valid passport or passport card to apply for a Real ID online and to have exceptions for individuals over the age of 75, “due to the limited availability of Birth Certificates, Marriage Certificates and other documents required.”

But the suggestions, if they are adopted, will not implemented by the federal government overnight, Myers said.

The most important thing right now is to get the process started as soon as possible, he said.

State senators Scott Martin and Ryan Aument, of Lancaster County, are hosting a Real ID seminar on Wednesday, Feb. 12, at Lancaster Airport Terminal in Lititz. The 4 p.m. time slot has filled up, according to their websites. However, as of Friday, the 6 p.m. seminar still had space.

You can register here and here.

One Proof of Identity:

Two proofs of Pennsylvania address: (all documents should have the same name and address)

Real ID: the process is not always straightforward

Getting your REAL ID as a Pennsylvania resident [how-to]

Hundreds crowded sessions on Real ID. Here's what they learned.