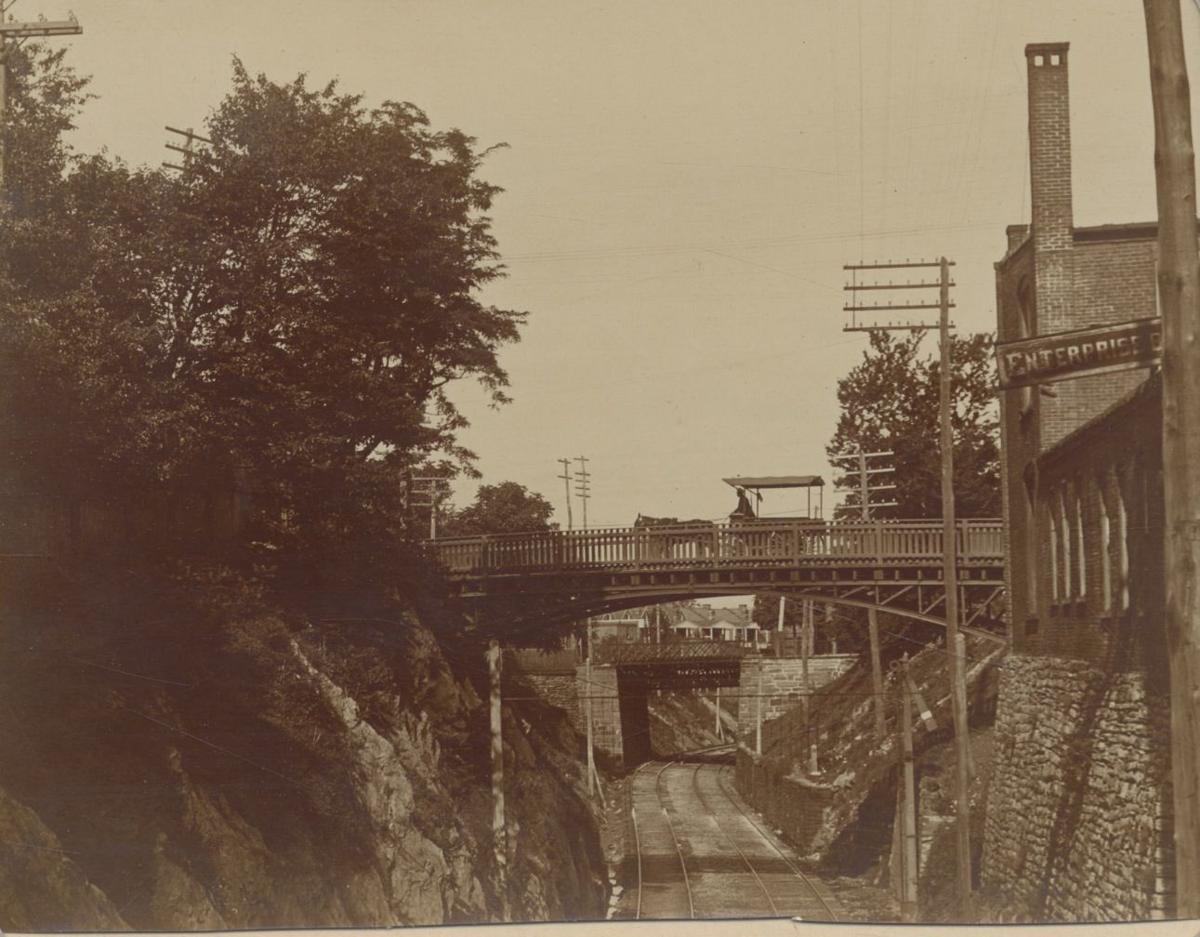 This photo from 1900-1910 shows the area where the Pennsylvania Railroad went through on its way to the old station at Queen and Chestnut streets. The bridge is Lime Street. The station was moved to McGovern Avenue in 1929, and the cut was filled in — except for an area beneath the bridge, which Lancaster staff recently discovered. 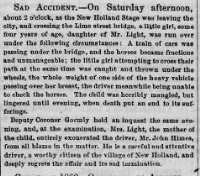 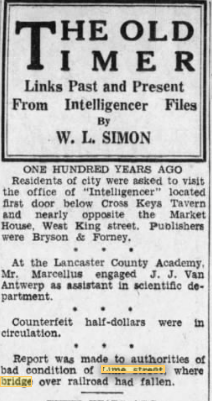 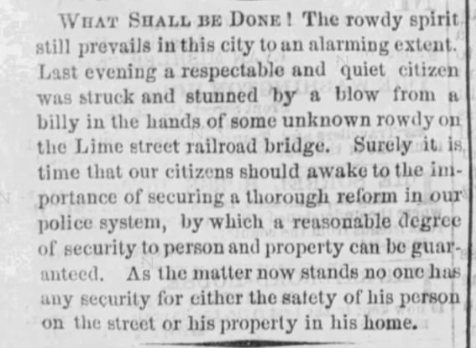 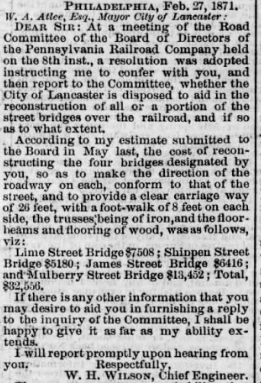 No one seemed to know much about it. So we decided to see what we could dig up using LNP archives.

Construction will close part of Lime Street in Lancaster for 7 days starting today; here’s what we know

The following information is pulled from newspapers.com. (Editor's note: Access to more than 200 years of Lancaster newspaper archives are available on newspapers.com with a digital subscription. Click here for more information on how to subscribe.)

The first mention of a railroad bridge at Lime Street in the archives, which date to 1795, was on page 2 of the Tuesday, May 1, 1860, edition of the Lancaster Intelligencer.

The article, headlined "Sad Accident," told of a 4-year-old girl who died after being run over by a stage coach as she tried to cross it. The horses "became fractious and unmanageable" when a train went over the tracks. "The child was horribly mangled, but lingered until evening, when death put an end to its suffering."

However, a Thursday, April 8, 1937, item in the Intelligencer Journal called "The Old Timer - Links past and present from Intelligencer Files" refers to an item 100 years earlier mentioning the bridge: "Report was made to authorities of bad condition of Lime Street, where bridge over railroad had fallen."

A Saturday, Aug. 26, 1865, item in Daily Evening Express the gave an account of a "respectable and quiet citizen" who was "struck and stunned by a blow from a billy in the hands of some unknown rowdy" at the bridge.

"Surely it is time that our citizens should awake to the importance of securing a thorough reform in our police system, by which a reasonable degree of security to person and property can be guaranteed. As a matter now stands no one has any security for either the safety of his person on the street or his property in his home," the item concluded.

The Lancaster Intelligencer followed up on Wednesday, Aug. 30, with the victim's name, "Mr. Thomas Coleman, Merchant Tailor" and noted "The villain's object was doubtless plunder, but he got none."

Seemingly one-upping the Express' account, the article opined: "The assaults, robberies &c., we have been chronicling lately in our midst will prevail just so long as the niggardly policy continues of having no regular night police and extinguishing the city lights at 10 o'clock. Let the City Councils right these matters at once."

The Thursday, March 2, 1871, Lancaster Intelligencer and Daily Evening Express carried an estimate by the Pennsylvania Railroad's chief engineer to reconstruct four railroad bridges, including Lime Street, for a total of $32,556. (Lime Street cost: $7,508.) The estimate was in response to Mayor W.A. Atlee asking the railroad to reconsider having declined to improve the bridges. The mayor noted he felt "the inconvenience to our citizens occasioned by the condition" of the railroad's bridges.

The Wednesday, Aug. 1, 1877, edition of the Lancaster Intelligencer carried an item that council was to consider a petition for its widening. It was said to be “long unfit … on a great thoroughfare to the country, but leads ‘down town’ from a section of the city which has probably made more improvements in the past ten years than any other.”

The Saturday, May 7, 1887, Lancaster New Era carried an article titled "Death a Relief" and told of 6-year-old Danny Powers dying after falling from the bridge.

"The little boy has been the victim of unfortunate circumstances during his short life. When but two years old he got hold of a bottle and drank from it a quantity of coal oil," the article noted.

A Saturday Jan. 11, 1913 account in the Lancaster Morning Journal account noted the bridge (rebuilt in 1887) was inspected. "It was agreed by all the at the bridge is worn out and something will have to be done at once."

A Wednesday, July 26, 1922, News-Journal front-page article carried an article that the railroad was ready to replace the dangerous bridge.

"... quick action is promised to remedy what at any time might be the scene of a fatal accident," the article began.

The last mention of the bridge in archives appears to have been on Saturday, March 4, 1950, in the Intelligencer Journal which carried a report on officials discussing its modernization.

"Only recently, the city had spent much money in modernizing the Lime Street bridge, converting it to a concrete, undivided structure," the article noted.

For more on LNP archives and newspapers.com:

Learn the story of Lancaster County's own Miss America: Evelyn Ay won the crown in 1953

Your LNP subscription now includes access to hundreds of years of newspaper archives; here's how to use it

Two-plus centuries of history at our fingertips

A cavity was found under a Lancaster city street, PennDOT and the city are searching for others

What’s underneath Lime Street in the railroad bridge cavity? [photos]

When Austin Kibler was contracted to build new curbs along North Lime Street, he didn’t expect to find the remnants of an old bridge directly …

Over the summer, contractors building new curbs discovered the remains of an old railroad bridge under a section of North Lime Street in Lancaster.